While the fate of Biden’s two infrastructure spending bills remain very uncertain at this moment, one piece of the puzzle — a $1 trillion piece — passed the Senate earlier this month.

The piece that passed the Senate August 11th (with 19 Republican votes, including Mitch McConnell) will likely pass the House if and when it comes up for a vote. There’s simply too much interest among D.C. lawmakers to be part of “landmark bipartisan legislation” to let this opportunity pass by.

So what exactly is in the bill for Oregon and the Portland region?

I put that question to Oregon Department of Transportation Assistant Director Travis Brouwer. Brouwer said his team is still analyzing the bill but has already crunched some preliminary numbers.

Here’s how he said the bill would impact Oregon’s transportation system. Keep in mind, the figures below don’t include estimates for the main pot of bicycling and pedestrian-specific projects (Transportation Alternatives fund). Also not included below are estimates on how much Metro will get as part of their suballocation:

And here’s the year-by-year breakdown of transit money that would come to metro Portland:

And the total state-by-state apportionments from the Senate bill: 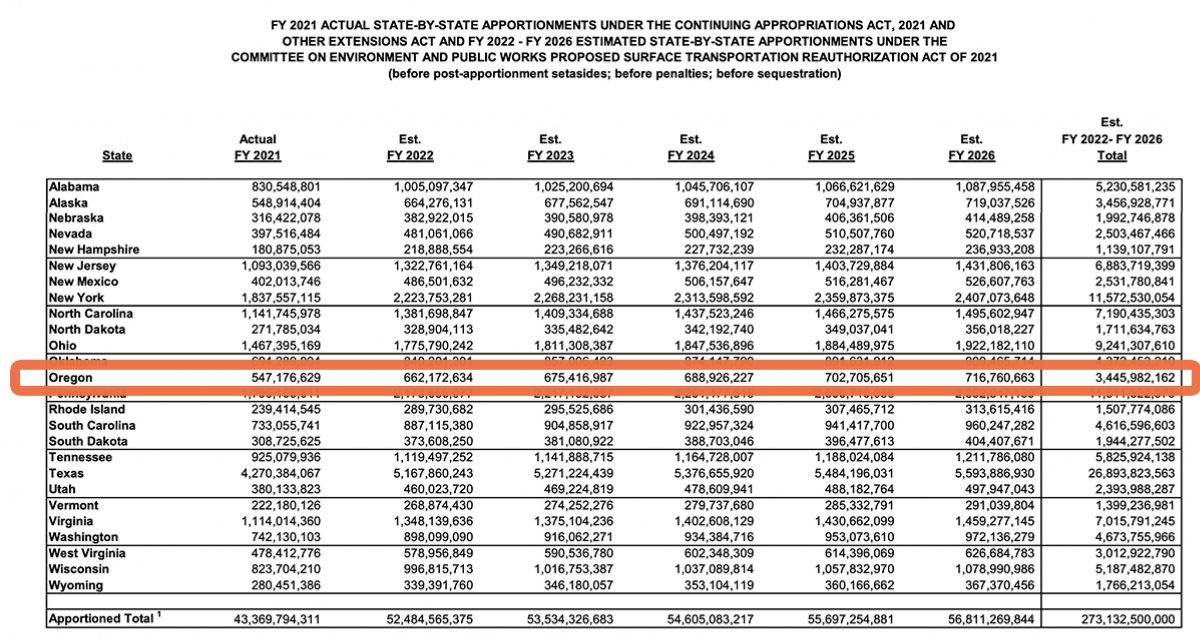 There’s a lot at stake here. If ODOT is responsible for this huge influx of funds, it will be more important than ever to make sure their leadership and governance is set up in a way that doesn’t result in us adding more capacity for fossil fuel-burning vehicles.

Get this thing passed before republicans re-take control of Congress next year and cancel everything to pay for more tax cuts for the rich!

The Portland, OR-WA Metro Statistical Area has 0.76% of the country’s population but gets only 0.18% of the funds apportioned in this bill.

I’d bet that most cities are getting short-changed and that together, we’re again being forced to subsidize the car-centric lifestyles of exurban and rural folks who want roads, roads, roads.

Mike
Reply to  Mark in NoPo

Two counter thoughts for consideration:
1. Most “local” food is grown outside of Portland city limits and yes, those car-centric farmers do rely upon motor vehicles to get the food to market.
2. There has been a trend over the past few years (accelerated due to Covid) of people moving out of the cities and into more rural areas.

Your second point is contradicted by the census data. The exact opposite is actually true: people are moving from rural areas to urban areas. Most predominantly to suburbs, but also to cities themselves. But I do agree with your first point.

I fail to see how that is a “counter” to the statement that the OR-WA metro contains .76% of the population, but is only receiving .18% of the funds..

Are you saying that because “we don’t grow our food” we don’t deserve our share of the funds?

Are the Member Designated Projects that were in the Moving Forward Act passed by the House part of the Senate? Or the upcoming reconciliation bill?

*part of the Senate bill

The bill looks to be more of the same. Billions for widening freeways, inducing traffic and stoking global warming.

sell your soul to ol Ghina Joe. . .were watching

I’d be curious to know what the “Significant investments in passenger rail” means. What we would need is a separate passenger track that provides a frequent (at least every 30 minutes between 8am and 68m) fast, reliable train connection between Eugene, Salem, Portland, Olympia, Seattle, and potentially Vancouver. Anything but that will not draw people away from driving between these places.

We could do so much with a well-functioning train system that connects these cities, if we were willing to put the money into it.