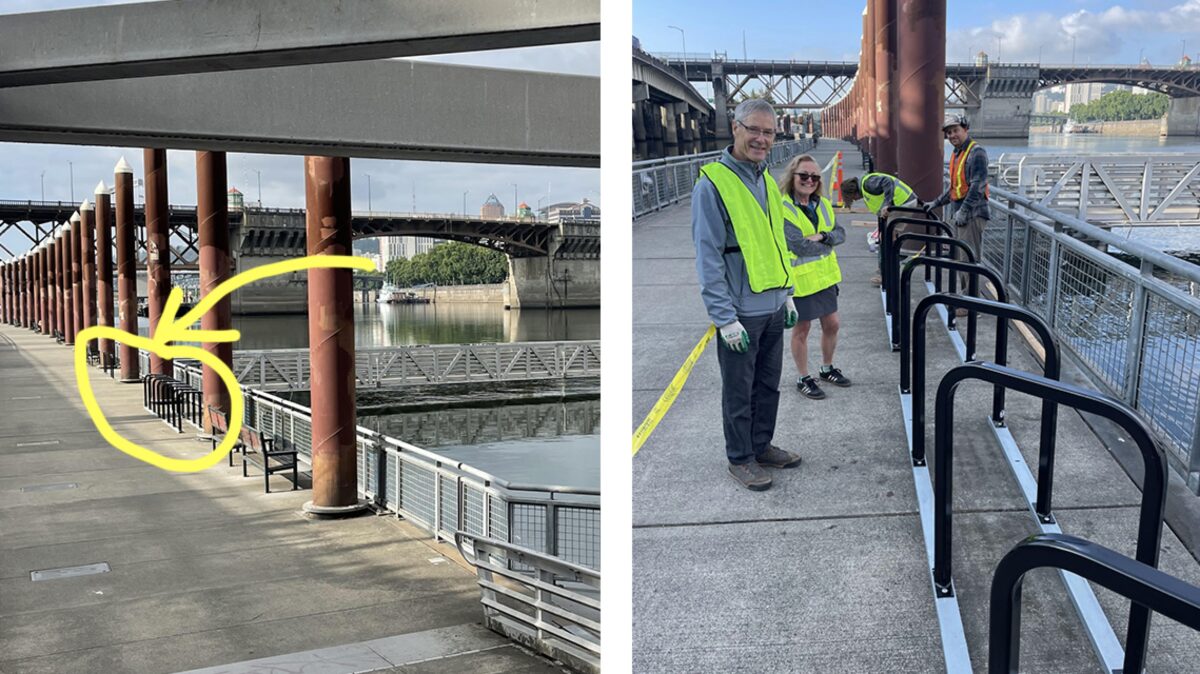 “Livability to me is a town where you can ride your bike to the river and swim.” That’s a statement from Willie Levenson of the nonprofit Human Access Project, a group he founded in 2010 to get more people to swim in the Willamette River near downtown Portland.

This week Levenson completed a key part of his vision for a welcoming and swimmable downtown riverfront with the installation of 10 new bike racks on the Eastbank Esplanade at Duckworth Dock (you might recall our coverage of this project one year ago). The racks are located on both sides of the entrance to the dock, which is right at the bottom of the floating ramps south of the Steel Bridge.

Two of the new racks are installed parallel to the path specifically to allow larger wheelbase cargo bikes to be locked up without encroaching on passing traffic. The racks were funded by Go Lloydals, a transportation management association (TMA) funded through the City of Portland to encourage biking, walking and transit use. Travel Oregon paid for the permits, insurance, and installation.

The new bike racks are just one of the features of the new swimming area. Last year Levenson’s group installed ladders and swim buoys. They also successfully changed the dock permit from motorized to non-motorized use only in 2020.

“For me the bike racks were critical,” Levenson said in a phone interview Monday. “Because it just helps connect the dots from a landscape architecture and communication standpoint. ‘Okay, I see the bike racks. I see the ladders. So the idea is to bike to this dock then swim!'”

Levenson knows that too many Portlanders don’t have a connection to the Willamette riverfront and that, “If people aren’t able to get to the river’s edge, it’s going to be much harder to develop a relationship with it.”

If you want to get to know the river, Human Access Project is hosting a celebration on the dock Wednesday night. They’ll catch the famous Duckworth Double Sunset (see photo above) and will be the official end spot of the Pedalpalooza Yacht Rock Bike Ride.

Swimming in the Willamette is a real treat on a hot day!

Is it still closed to dogs due to the toxic algae? Makes me a bit concerned to swim in it if dogs shouldn’t be swimming in it.
https://www.wweek.com/outdoors/2021/08/06/much-of-the-willamette-river-that-runs-through-portland-is-now-toxic-to-pets/

The toxicity threshold for dogs is a lot lower than for people. As others have noted, dogs drink the water, and also lick the bacteria off their fur. There are treatments for humans who are exposed, but in the same way some things are toxic to some animals and not others, there is no treatment for dogs (per the Chief Vet at Oregon Humane Society), while there is for humans.

Always great to see bike racks! My feeling is, this area is constrained so having the tail of the bike hanging in the lane is maybe not optimal.

(At first I thought the “swim” part of the headline was a joke. Oops! Guess not. I can’t imagine submerging my head in the Willamette. Reminds me of Seinfeld where Kramer was swimming laps in the East River. “You’re swimming in the East River? The most heavily trafficked, overly contaminated waterway on the eastern seaboard?” “Well technically Norfolk has more gross tonnage!” )

Just FYI, the Willamette is clean enough to swim safely

Love the Willamette swimming project. Copenhagen has several wonderful harbor baths on bike trails. https://en.wikipedia.org/wiki/Copenhagen_Harbour_Baths Their more elaborate designs enclose the swimming areas with floating docks and have towers for diving and lifeguards.

Like the idea, but I don’t find the idea of swimming in the Willamette very appealing. Closest I get is the Clackamette Cove.

The Willamette BETTER BE CLEAN! Otherwise, why did we spend all of this money on big pipe projects over the past 2 decades or so?

Portland’s BES isn’t investing the money to stop the Fanno Creek sewage spills. They did spend they money to temporarily block the Fanno Creek Trail at times and to bulldoze a home on SW 86th Avenue and work against logic by pumping the sewage uphill instead of working with Washington County’s Clean Water Services.

Do you have more info on that uphill pumping boondoggle?

I’ve put my kayak in here. A folding one, which can be transported by bike, so I am delighted to see the city make more bike-to-paddle options a reality. Thank you Portland.

I’m usually a fan of bike racks but you could already lock up your bike to the hand rail, actually in the picture right next to the racks and this area can get really crowded on weekends. I’m skeptical but curious to see how this will work out.

Only 20 years ago, swimming in the Willamette was not even a consideration due to near daily combined sewer overflow. Remember this when the problems of the world start to get you down. Progress can be made when we stop fighting and start doing.

Please tell me this dock is named after Kevin Duckworth.

Vote Up4Vote Down  Reply
« Here’s how much funding would come to Oregon as part of the Biden infrastructure bill
Family Biking Column: My modest resolution for a weekly bike adventure »