Our latest video takes you to a little-known section of the Columbia Slough tucked between NE 92nd and the I-205 bike path. It’s a great place to ride that, before last weekend, I never even knew about.

I was riding home from the Cascade Station shopping center when I stumbled upon an entrance to the Slough. Upon investigation, I found a beautiful stretch of path that was full of shade trees and had some of the clearest Slough water I’ve ever seen — much to the liking of a huge Blue Heron!

Turns out I was on what some folks know as the Alderwood Trail. This multi-use path actually begins north of Alderwood just east of 82nd Avenue (see dashed line at right). Then it crosses south on 92nd to connect to the Slough all the way to the 205 path. In total it’s about one-mile in length. You probably have never ridden it because it doesn’t really connect to a major route since most folks get to the 205 path via Marine Drive.

Even so, it’s worth checking out next time you’re in the area. And as I mention in the video, Alderwood isn’t great to bike on, so if you know this little path is here it makes for a safer and fun, east-west alternate. 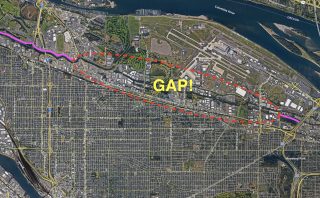 As for details on this path, 40-Mile Loop volunteer and retired Portland Parks planner Jim Sjulin says it was most likely built in the early 2000s by the Port of Portland (it abuts a PDX Airport employee parking lot). Jim says the easement for the trail dates back to 1991.

Another reason I wanted to highlight this path is to increase urgency to complete the Slough Trail. As many of you know, the current Slough trail starts in north Portland southeast of Smith & Bybee lakes and runs to North Vancouver Ave. That leaves a five-mile gap (see graphic at right) between where the path currently ends and where this section begins. It will take a concerted effort by government agencies and advocacy groups to make this path whole. Let’s do it!

My recollection is that the pathway was in place in the mid-1990s… When the Port widened Alderwood and planned for the parking lot there was consideration to make sure the path was retained. It was always a bit of an oasis in an otherwise harsh (traffic) environment and provided a brief respite when riding in that area.

neato! Thanks for that tidbit Roger.

I think the asphalt parts north of Alderwood are from the late 90s – I remember using the route for a PSU ride back then, part of the Alderwood loop – and the southern concrete portion was early 2000s. When I lived in EP, I would use the route to get to 92nd and thus to BikeTires Direct. It’s well-known in EP even though it’s technically part of CNN.

It’s the fact that you didn’t know about it that I find even more amazing – I had always assumed you already knew where all the good rides are citywide, even in East Portland. Now I’m wondering, do you know about San Rafael from 48th to 162nd? Or the back route south of I-84, 148th to 162nd, through Wilkes? The 165th-Naegeli-Powell-Circle route to the Springwater? Where the DC-8 crashed on 157th?

What’s special about San Rafael? And where is it? I can’t find trace of it between Grand/MLK and I-205, and it just looks like a baby arterial east of I-205.

Thanks for the video. It’s always nice to see trails highlighted. I usually just take the road to the north since it’s more direct and less secluded/scary, unfortunately.

In the “Gap” graphic, the trail is actually a bit more north than depicted. You’ve got it running on the north side of the Johnson Lake Property. Years ago there used to be a bike trail (and jumps!) through that too but I think more people live back there now.

I used to get attacked by a crow regularly on that path. It became part of a Sunday morning ritual. Mom protecting those kids. Always wear your helmet!

It’s extremely important that your readers know that there is a large camp on this path, and there’s almost always a car parked either directly in or partially on the path, when it’s not driving up and down it. I ride this section almost every day, and there has rarely been a single day where the contents of the camp and one or more vehicles wasn’t spread across the entire path. Tread with caution, and I would actually avoid it.

I am sure the mayor will get this fixed pronto.

Hmm, didn’t see this car or camp on Saturday when my 4-yr-old and I rode the path (Xtracycle) going to Cascade Station. She pointed out that someone had lost their pants under a bush and I did see a tent off the path toward the slough. We also saw a family of ducks!

There was no camp on this path when I rode it. No car blocking anything either. It was actually quite nice.

I went through yesterday. There were some minimal signs of camping. Only a tent or two off to the side at the east end of the trail and wheel ramps (for working on a car).

I was pleasantly surprised at how nice it was. The biggest issue, and this seems to be a problem with all these off-street trails, roots had pushed up the thin asphalt in a few places creating some really harsh little bumps. I would feel like a jerk riding though here at any normal commuting/training pace. But for a slow roll through some nature it’s nice.

I have seen a car as well, maybe a small Kia or Hyundai? Really took me by surprise when I came upon it after not seeing it on previous rides. I want to say it’s about a third of the way in from the east entrance, at the impacted area on the left (slough-side) where there is some sort of impromptu signage.

This stretch of trail really is nice, except for the car. I think I saw beaver gnaw marks on a few trees.

Maybe you have already done something like this, but it would be great to have a series on “hidden rides” in Portland. I remember the joy of discovering the trail along US26 in Goose Hollow when I first moved to Portland. It became an important connection for me that I might not have picked up on if a friend hadn’t shown me it.

That’s crazy that there’s ~1000′ of path right there, with nothing around it!

It is pretty weird. A vestige from a city requirement based on development of the lot? Does anyone know if it’s ok/legal to ride on the double track dirt to the west and east of this strip? It seems like it extends quite a bit further along the levee.

It actually looks like (in theory) it wouldn’t be too hard to connect the from the east end of the Columbia Slough Trail to Marine Drive. Most of it would be on top of the existing levee, similar to the existing paths. There is a earthen cross over at MCDD (which already appears to have public access from NE Elrod). The route is identified as the future Peninsula Canal Trail here: https://bikeportland.org/2020/10/29/the-marine-drive-path-is-75-complete-here-are-the-gaps-that-remain-322124

I rode out there once and the folks at the Fazio Landfill had a FIT. They even drove out to the entrance to see how I got in. They said it was private property, but I’m pretty sure that doesn’t start until right before the Lavender farm. Still, they were NOT happy about me being there.

A hidden gem of anyone working at velotech, or in cascade station.

I’ll add that the area in general is a hidden option for customers of Velotech, dba WesternBikeWorks and BikeTiresDirect. For those like me who miss the convenience of the WesternBikeWorks shop in NW, know that riding out to their warehouse for store pick up is pretty easy. Personally, I never take the short path Jonathan documents because I don’t find Alderwood unpleasant. I look forward to improvements on Cornfoot and the day the stretch between 42nd and 205 becomes better understood and utilized. And I really look forward to Velotech opening some sort of a showroom and service area out there.

Also a connection listed in the East Portland In Motion plan (T-4) to Ikea from that trail. Remains unfunded. https://www.portland.gov/sites/default/files/2020-02/recommended-projects-map.pdf

I’m sure it will be implemented soon.