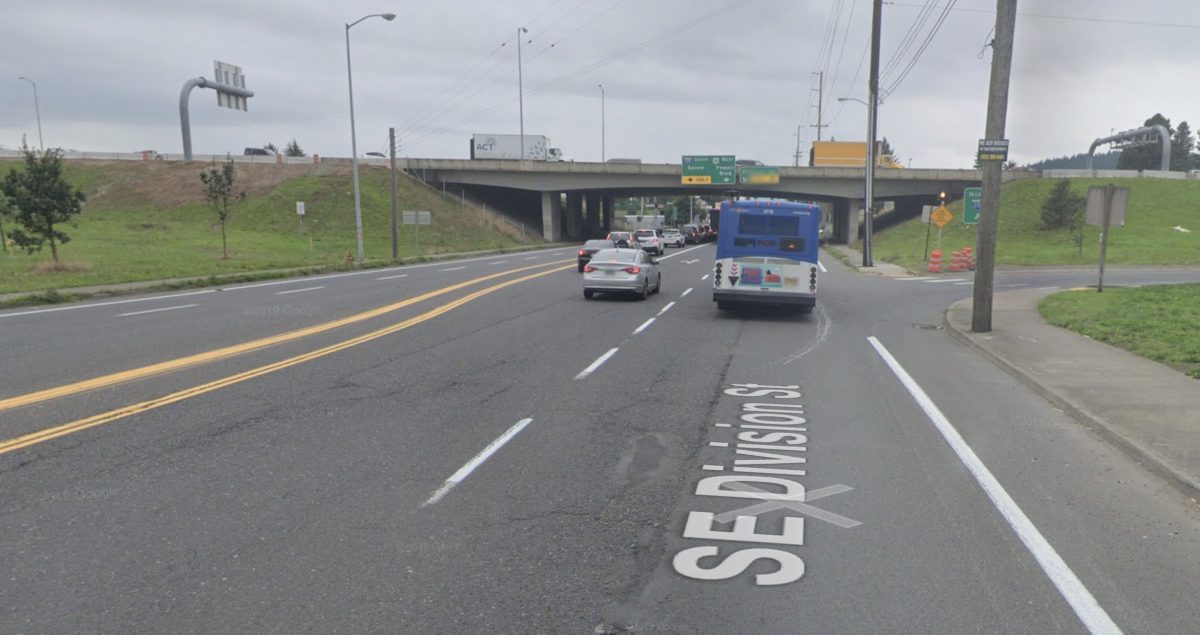 This bike lane on SE Division at I-205 will be widened with a buffer strip in both directions as part of an ODOT project.

Here’s some good news: The Oregon Department of Transportation will break ground tomorrow (Friday, 7/23) on a project that will add buffers to the bike lanes and make other safety-related updates to Southeast Division Street at I-205. 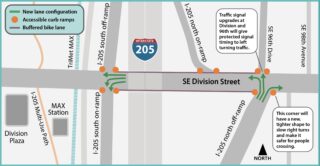 The $2.7 million project is focused on the ramps that people use to exit and enter the freeway, but the changes will benefit others as well — especially those on foot or on bikes. Division where it crosses I-205 is a very chaotic and stressful place. It has four or five general lanes, the ramps, and a width of about 75-feet. The bike lanes are outdated, narrow, and unprotected.

Here’s what ODOT plans to do (emphases mine):

— New lane configurations on the I-205 north off-ramp to Division Street will create separate lanes for left turns, through traffic and right turns to 96th Drive to reduce conflicts. The ramp currently has two right turn lanes and a combination left turn/through lane.

— Traffic signal upgrades at the intersection of SE Division Street and SE 96th Drive will give left turns their own dedicated signal.

— A new corner shape at the southeast corner where the I-205 north off-ramp meets Division Street and 96th Drive will slow right turning traffic and increase safety for people crossing the intersection.

— New lane configurations on Division Street westbound will create two dedicated left turn lanes from westbound Division to the on-ramp to I-205 south and one lane for through traffic on Division to reduce conflicts.

— New curb ramps will improve safety and accessibility for all users in the area, including those with disabilities.

The “new corner shape” part really caught my eye. ODOT has dozens of freeway onramp corners in neighborhoods throughout Portland that are obscenely wide and very dangerous to people outside of cars. If they recognize the risk of these corners here, perhaps they’ll make similar changes elsewhere. And while a wider bike lane is great, ODOT needs to start adding protective elements to the buffer zones. Paint is not protection.

Construction will start tomorrow and is expected to last until at least the end of 2021. If you ride or walk in this area, expect detours and work zone conditions during construction. For more, check the project website.

ODOT has dozens of freeway onramp corners in neighborhoods throughout Portland that are obscenely wide and very dangerous to people outside of cars. If they recognize the risk of these corners here, perhaps they’ll make similar changes elsewhere.

More to the point, it can now be shown that they have recognized such a risk, and thus if they don’t do this in future work they can be held legally accountable (it can be argued).

This was my commute for 20 years. Westbound as your going downhill on Division traffic backs up for several blocks and the crossing of the northbound on ramp was always treacherous. West of the freeway overpass you had to deal with cars and trucks exciting the freeway and I was hit by an inattentive Washington driver creeping into the bike lane while they were texting. Beyond the southbound exit ramp there was always a huge puddle after a rain that you had to deal with. Hopefully the drainage issue will be addressed with this project. The inattentive drivers won’t change with engineering upgrades.

Eastbound from 82nd Ave. I had to ride by the place Dustin Finney was killed on his bike at 87th. During rush hour traffic backs up 4, or more blocks before 92nd and the bike lane is an enticing alternative for drivers wanting to make a right on 92nd. Happened to me dozens of times. At the south side entrance to I-205 you had to be certain drivers had seen you before crossing and then be sure you were close enough to traffic to avoid the storm drain on the east side. You have 12″ between the drain and the bike lane line (I measured).

Any, and all improvements done to Division will be met with heartfelt gratitude. Too many lives have been lost on PBOT’s busiest street.

This has always been a dangerous spot even for people in motorized vehicles. There are two left-turn lanes from westbound Division to southbound 205, but only one is dedicated. Drivers in the center lane can either go straight or turn left, with the signal often giving a green ball (left turns permitted, but must yield to oncoming traffic) rather than an arrow. This often leaves left-turning vehicles hanging out in the lane while other drivers behind them barrel down on them with a green light, often realizing much too late that the vehicle in front of them is not going to be moving for a while. This bizarre tretment is dangerous and noncompliant with the MUTCD. I have witnessed several collisions and near-misses as drivers cruising along in that lane at the speed limit, with a green light, hit or almost hit cars waiting to turn left. So it won’t be just us cyclists benefiting from the change.

Vote Up0Vote Down  Reply
« Opinion: 16 years after Portland’s ‘urgent’ Freeway Loop study, where has our boldness gone?
BikePortland Podcast: An interview with Aaron Brown from No More Freeways »