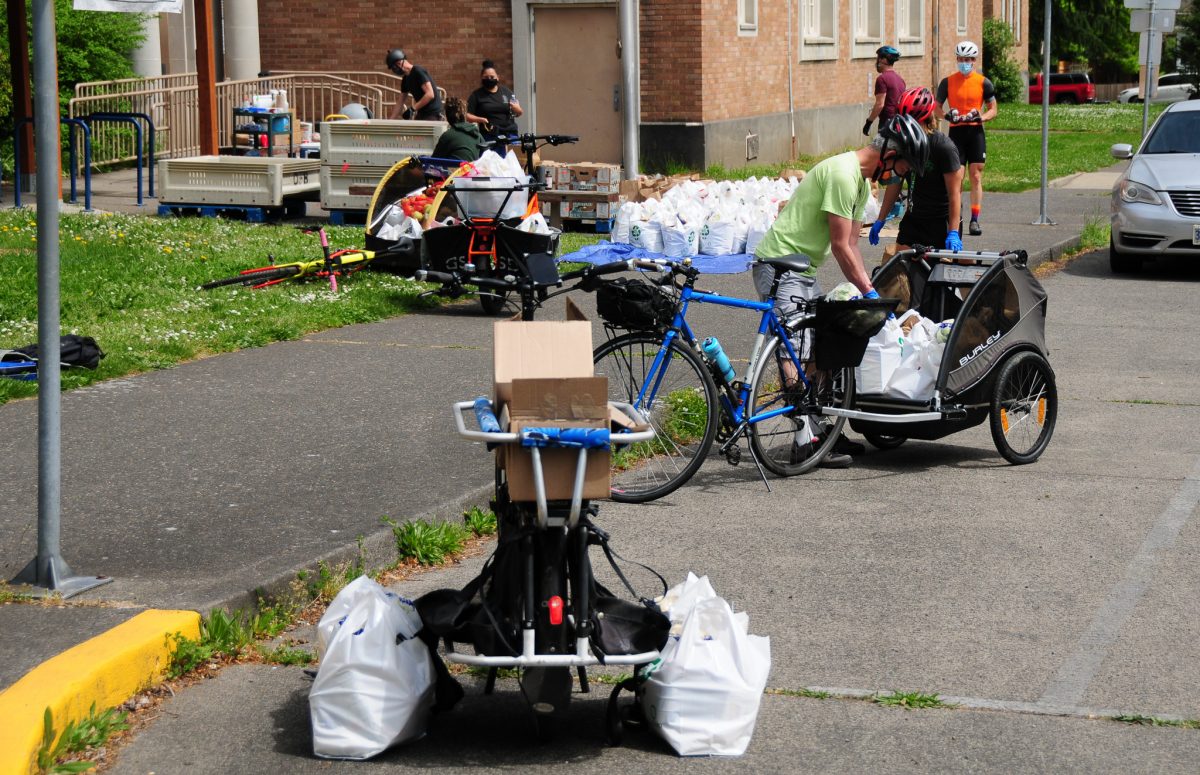 “I think food deliveries are here to stay. There are a lot of barriers that can stand in the way of getting fresh food to your family.”
— Nat Shreffler, Community Cycling Center

There were also no customers at their retail bike shop, no volunteers at their weekly “wrench nights”, and no kids at their sought-after summer camps.

So like any good nonprofit — they didn’t pout, they pivoted: Instead of delivering free and affordable bikes and their associated benefits to north and northeast Portland neighborhoods, the CCC began to deliver free food by bike to low-income households in need. The concept was simple: People were locked down because of Covid and couldn’t go out to pick up donated food. So the CCC would bring it to them.

They started in early April 2020 with 50 families a week in the Cully neighborhood, then their list quickly grew to about 175 families a week by last summer. 13 months later the program is going strong. The organization has a well-oiled, efficient operation that pedals fresh food to about 200 households per week.

I joined a CCC crew at Cesar Chavez School in the Portsmouth neighborhood on Wednesday to take a closer look.

When I arrived, there were well over 100 bags of food already assembled by volunteers with SUN/Latino Network and the Northeast Emergency Food Program. I was one of seven riders who showed up to help.

CCC staffer Nat Shreffler brought us together for a quick debrief. She handed out gloves and made sure everyone had masks, then handed out a list of names and addresses. The list was split into eight different colors which corresponded to routes given to each volunteer. After a few instructions, and with marching orders in-hand, the next step was to load our bikes.

Today’s food offering (it changes each week, depending on what gets donated) would be a robustly-stuffed bag full of veggies, cooking oil, rice, mac ‘n cheese, and other standards. We also dropped in a sack of pears and a pound of frozen ground beef. All told it was about 30 lbs per family.

The bags were loaded on a variety of trailers and cargo bikes. I gave my Burley Flatbed its trial run, another person had an Xtracycle Edgerunner (with sideboards), there was an electric-assisted Tern GSD, and a vintage Ibis tandem with a Sunlite trailer.

Once loaded with about seven packages of food, I rolled out with Shreffler. We pedaled a mile or so to an apartment complex and began our deliveries. Each one I left on a doorstep was met a few seconds later by a heartfelt “Thank you!” and a wave. 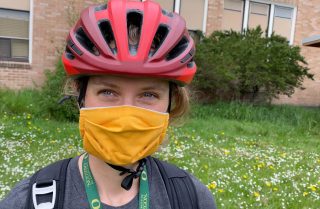 Shreffler said the CCC has stumbled upon an important new community service she doesn’t think will go away when the virus threat does. “I think food deliveries are here to stay,” she said as we navigated north Portland streets. “Even with things opening back up, a lot of these families can’t make it out to pick up groceries. A lot of people are too busy working… and there are a lot of barriers that can stand in the way of getting fresh food to your family.”

After Shreffler checked a chain of text messages from other riders in the field, we headed back to the base camp at Cesar Chavez school. “I love that we can provide this crucial resource and do it by bike,” she said as our empty trailers rattled on potholes. “We’re providing food and cleaner air for the community.”

When we got to the school it was a hive of activity as riders loaded and packed bags onto their bikes to get ready for their second trips of the day.

Dan Unger was among them. Unger had been a CCC volunteer before the pandemic. He was a regular bike refurbishing specialist who helped the CCC get bikes ready for their Holiday Bike Drive and other programs. With less demand for those programs, he switched from turning wrenches to turning cranks. “A lot of regulars found that we had time on our hands and we still wanted to volunteer,” he shared.

Unger rolled up to north Portland from the southeast Hawthorne area. I could tell he took pride in knowing street names this far north. When asked what he liked about doing the deliveries, he said, “The best part is when there’s something the kids are excited about in the food bag. Like a box of sugary cereal or something, that gets a thumbs up. When it’s three boxes of celery, not so much.”

CCC Executive Director Momoko Saunders estimates they’ve done about 7,000 deliveries so far, weighing a total of around 144,000 pounds. In addition to the Cesar Chavez location, they’ve also been delivering from a base in the Cully neighborhood since May 2020 through a partnership with Living Cully and Verde.

For Shreffler and her dedicated crew of helpers, the deliveries show no sign of slowing down. And she’s fine with that.

“Wednesday is definitely my favorite day of the week,” she said, her eyes squinting through her mask so I could see her invisible smile. “And I think that’s the same for the volunteers and the recipients.”

This program needs continued to support to keep going strong through spring and summer. A $24 donation supports food for three households. If you’d like to volunteer, email volunteer@communitycyclingcenter.org.

Way to go CCC! Awesome to see an organization stepping up to help meet a community need.

just one more reason to support an already awesome organization! thanks for sharing this story, jonathan.

This is so cool!

Vote Up1Vote Down  Reply
« Gideon Overcrossing has been renamed in honor of Metro Councilor Bob Stacey
A bereaved mom asked ODOT why a safety project stopped short of deadly intersection. Here’s their response »