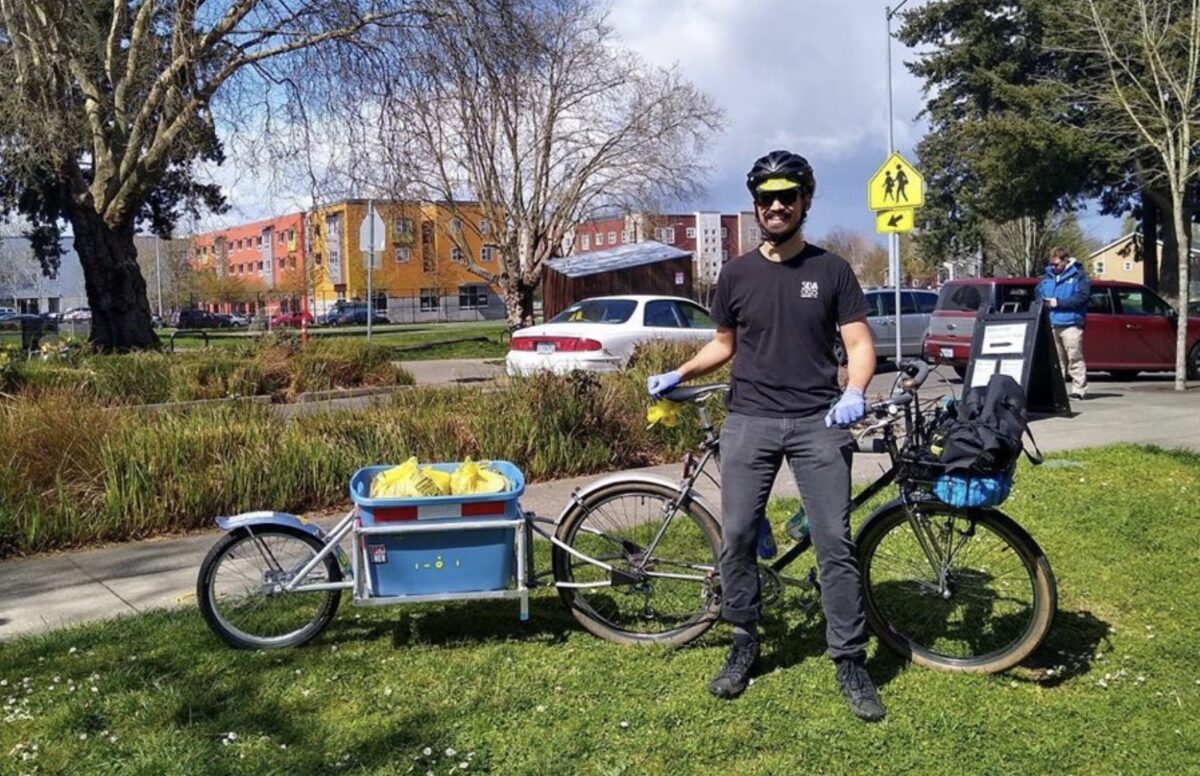 When schools closed due to the pandemic, so did access to food for thousands of Portland families. Bikes are now helping close that gap thanks to an emerging program created by the nonprofit Community Cycling Center.

“A community need emerged as part of the pandemic and our staff rose to the challenge.”
— Jonnie Ling, Community Cycling Center

The CCC has not stopped adapting since the grip of the coronavirus crisis first took hold. In the past month they’ve closed their retail store on Northeast Alberta Street, then partially re-opened it by appointment only, weathered an estimated $75,000 revenue hit, and launched an online e-commerce store.

Their latest change is shifting staff from delivering bike safety classes at César Chávez School, to delivering food to families by bike.

Multnomah County has set up seven food pantry locations as part of their Schools Uniting Neighborhoods (SUN) program. The one at César Chávez School was moved a half-mile away to Rosa Parks Elementary. This meant some families with no personal transportation, no time away from work, underlying health issues or other barriers could no longer reach the pantry.

CCC Executive Director Jonnie Ling has devoted three staff members and two volunteers to help get food from the pantry to families in the Portsmouth neighborhood. They show up once a week with their bikes and trailers and take packages of food people who need it.

Last week they served about 30 homes and Ling says they might replicate the system to serve other areas.

“Our mission is to broaden access to bicycling and its benefits,” he shared with us. “One of the benefits of bicycling is its utility and versatility. A community need emerged and our staff rose to the challenge.”

Bicycles are ideal vehicles for this task, but this is about much more than bicycling Ling said. “We need to support our communities in their time of greatest need and access to food is a basic necessity that is being challenged by this pandemic. If we don’t support them now, how can we honestly say that we are here to support them with their transportation and safety challenges in the future?” he said.

Another core part of the CCC’s work is putting bikes in the hands and homes of people who can’t afford them. A planned donation event with the Immigrant and Refugee Community Organization was postponed. Now Ling says the CCC is working out a door-to-door operation that will still get the bikes to people who need them.

Like so many local organizations and businesses, Ling and his staff are doing everything possible to keep the doors open — for themselves and for the people they serve. “The ingenuity and passion of our staff has continuously amazed me throughout this pandemic,” he said.

In an email today Francis shared, “This been a very fulfilling experience and I hope this has taken some load off of families in the neighborhood who are really dealing with a lot right now.”

Do they need more volunteers? I went through the Meals on Wheels orientation and they said there weren’t any bike delivery routes available.

Send me an email (please go to our website for my email) and we can discuss some ways to get you involved. -William Francis