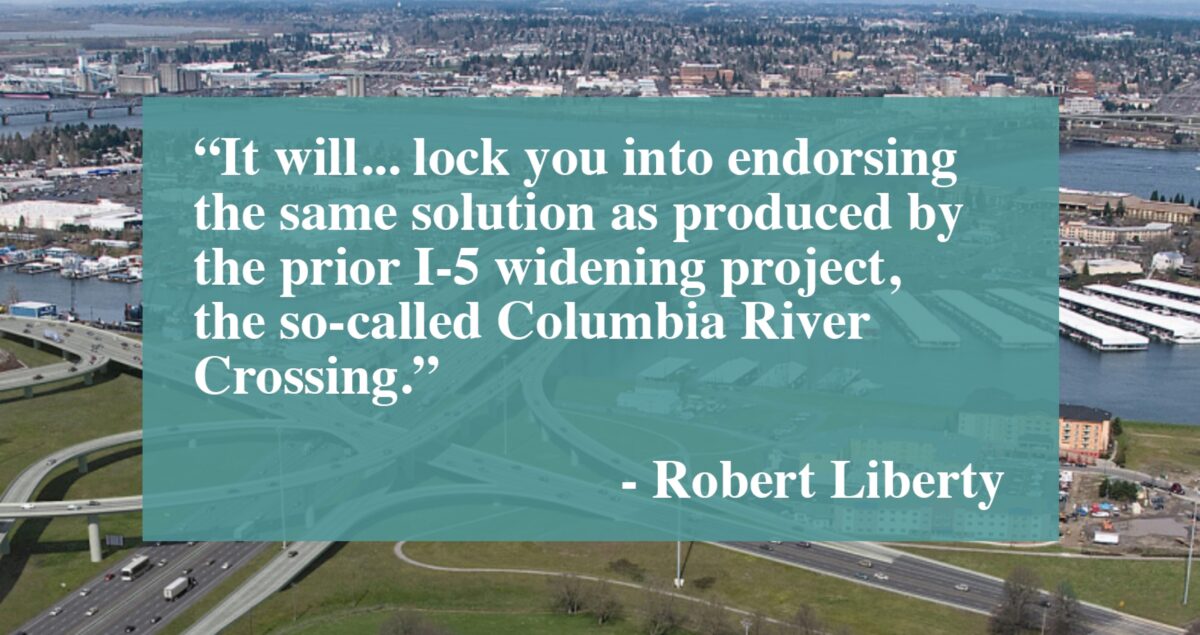 Last Friday we shared an update on the Interstate Bridge Replacement Program. That’s the focus-group friendly name of the effort by Washington and Oregon DOTs to widen five miles of I-5 between north Portland and Vancouver. In many ways it’s a repeat of the failed Columbia River Crossing project, hence CRC 2.0.

As our post last Friday revealed, some political leaders around the table are getting nervous because the new project already feels too much like the old project.

At the new project’s Executive Steering Group meeting March 17th, one of the most outspoken critics of CRC 1.0 made an unexpected appearance. It was Robert Liberty. Liberty served two terms on Metro Council before he resigned in 2011. He’s now a consultant.

10 years after he left elected office, Liberty used the public comment period to share a warning with his former colleagues as they consider the project’s all-important “Purpose and Need” statement (a key part of the NEPA process that sets the table for future design alternative possibilities):

The Purpose and Need statement is the single most important step of your process because it defines your objectives and your geography. It will very sharply narrow the range of alternatives to consider and therefore lock you into endorsing the same solution as produced by the prior I-5 widening project, the so-called Columbia River Crossing.

It privileges the shaving of two minutes off the Friday evening commute times for people living in Ridgefield or Battle Ground as the region’s highest priority worth hundreds of millions worth of study and billions of dollars in construction costs, making it clear that other people’s congestion is not worth the same consideration. That is far from equitable.

It doesn’t recognize that congestion pricing should be the analytic foundation for this and all other regional freeway projects. It ignores the land-use causes of congestion on I-5, including the legacy of class-based, racially exclusionary residential zoning still being practiced today. It’s based on assumptions about earthquake vulnerability and priorities that are called into question by ODOT’s own 2009 research. It does not allow for this project’s objectives to be compared with other regional projects in the region that would deliver more benefits for more people at a lower cost.

Finally, the replacement of the interstate bridges is only a small part in terms of cost and length of the total project. It does not augur well for meaningful public engagement when the project’s title does not honestly convey the scope and purpose of the project.

Thank you for the opportunity to testify.

IBR Program staff say the Purpose and Need document will be finalized at Executive Steering Group’s May 19th meeting. You can see the current draft of the document here (PDF).

Hear, hear. The priorities of the metro region can be served by tolling, enhanced active transportation and enhanced transit service across the river. Ensuring that these elements are prioritized above all other interests should be the one and only purpose of Portland, Metro, and the State of Oregon’s involvement in the CRC project.

Our elected officials should make it clear that Oregon doesn’t want or need a wider I5 bridge with increased SOV capacity, and that we will not participate in the process if that is the sole outcome.

What a shame he left the Metro Council, we need people like him in our transportation planning administration

Seeing how ODOT is involved, all paths ultimately lead to the route of least resistance; a bloated freeway bridge and miles of big dumb freeway built to dreams from 40 years ago. Designed by engineers with efficacy their master. I have zero faith anything will change this time around no matter how many comments or founding statements made to the contrary. ODOT is a retrograde pile of garbage. Everything they touch becomes over-budget, ugly and slow. A real embarrassment for what was one of finest state hwy departments in the country.

Why don’t the states create a bridge “authority” to design, manage and maintain the project with the goal being to move the most people across the Columbia? Give them limit on Co2, a due date and let them run. That might incentivize a wholistic approach with consideration for funding and timeliness of delivery. Also would probably lead to fixing the RR bridge, adding a couple of arterial bridges and possibly replacing the I-5 one.

One of the arguments for a new bridge is to straighten the river navigation channel. Also, I’m not ready to accept consigning peds/bikers/bus riders to the least survivable bridge for 3 or 4 generations. Transit on a lift span? There goes the reliable schedule.

Before spending billions we should both implement congestion pricing and work to separate local traffic from long distance, cross-river, and freight traffic. It’s crazy that Hayden Island is only reachable by means of Interstate 5.

If we can find a way to close even one on-ramp N of Broadway there’s your two minute commute reduction right there.

The most important thing this project can do is divert SOV traffic from going through the center of Portland. The harm from commuters driving down I-5 vastly outweigh the benefits. We can do this in various ways:

1) Cheapest is simple policy change. Congestion pricing can limit the number of people commuting through downtown. 2) Rerouting freight/traffic around N Portland via a freight/HSR bridge on Hayden Island, and across a new bridge North of the St. Johns. This could also include a potential tunnel through the W Hills to connect with Hwy 26. 3) Removing I5 downtown, rerouting it via the Hwy 30 ROW, and redesigning the current I5 as a local-only, at-grade, multimodal boulevard.

The biggest thing we can learn from the CRC is: Do no harm. This project should make our transportation system more robust, safer and more sustainable, not simply allow more mega-commuters to travel through the city.

“Congestion pricing” == tolling of people who cannot afford to live in inner PDX (or were racially/economically displaced) that will primarily be used to build/maintain fossil fuel infrastructure.

“Do no harm” == policies that help upper income people are considered harmless even if they disproportionately harm the finances of lower income people.

PS: I’m aware that many who support “congestion pricing” want to direct revenue to transportation alternatives but I also remember how quickly these very same people were willing to compromise this away for some form of pricing — any form of pricing — no matter how regressive or poorly conceived.

“Thus, for every New York City outer-borough commuter that would pay the new tolls, 18 would gain from transit upgrades. But the working poor would benefit by a dramatically higher margin of 38 to one from a congestion pricing revenue stream used to fund both transit upgrades and the ‘Fair Fares’ discounts for the lowest-income riders.”

The implicit assumption that I, as a low-income person, am unaware of the distributional effects of progressive revenue targeting is annoying. It is my experience that one of the standard “active transportation activist” responses to a person calling for transportation equity is to assume that they are uninformed.

Also, did you read the bolded part of my comment that described how the usual suspects/insiders were all too willing to accept congestion pricing even when the vast majority of funding would be used for toxic, polluting, and regressive highway funding/maintenance.

We need a coalition to separate revenue from motor vehicle road funding. When was the last time Tina Kotek faced serious primary opposition? Are Democrats taking Green voters for granted?

Although the Democratic Party of Oregon represents the primary barrier to economic equity in transportation planning/funding, many local “activists” also pay lip service to progressive politics largely as a coalition-building tactic. In private and in practice, however, they are more than willing to throw poor people under the bus if they can spin deeply regressive economic consequences as “green” wins (e.g. eco-libertarianism).

Great comment. For instance, want to obsolete the highways into PDX? Agree to massive upzones of the neighborhoods. So people don’t have to drive until they can afford housing.

How unfortunate it is that our line in the sand is a poorly-managed and ossified city government, exemplified by PBOT. All those books and academic papers from the early 2000’s touting Portland’s visionary “edge” seem pretty quaint now, don’t they? The same agencies that once regaled us with promises of “10-minute neighborhoods” (which is how I was personally duped into wasting a fair amount of time in the past as a volunteer advocate) are now, in a distinctly illiberal manner, pushing massive freeway projects –or at least acquiescing before them– as we stumble blindly into an unknown and frankly frightening future. And let’s not forget that they’re simultaneously telling us that bike lanes on a major commercial street like Hawthorne are a no-go rather than a no-brainer… I was just listening to an NPR story the other day about cities like Oakland, Seattle, and Louisville working to make their pandemic-related pedestrian-friendly infrastructural changes permanent and I doubt that it’s front-page news to anyone that Portland never entered the conversation.

I feel your pain, Andrew, at being “duped into wasting a fair amount of time in the past as a volunteer advocate.” The ground is littered with broken former volunteers, who entered into these arrangements with high hopes of making a difference, only to be chewed up and thrown away.

‘equitably benefits all travelers’ is an oxymoron. Any project, especially large undertakings, will provide unbalanced benefits and costs.
Also, a NEPA ‘No Action’ should be to continue present practices which means replace in kind. The project should consider a lane-for-lane replacement with minimal improvements beyond the bridge proper as the No Action.