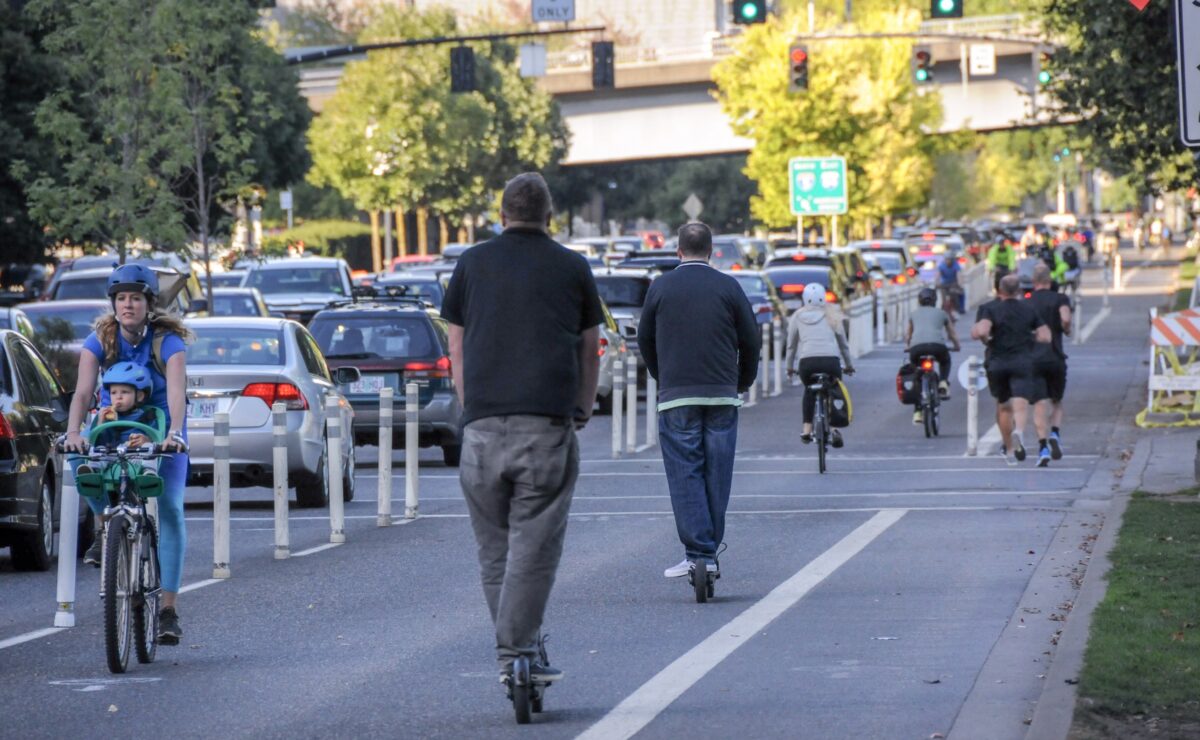 “As we look ahead to reinvigorating our city post-pandemic, I hope to see more collaborative initiatives like this across our city.”
— Jo Ann Hardesty, transportation commissioner

Once complete, the $4 million project will connect to other changes already under construction on Naito to the south and north to create a key new linkage through Portland’s central city. Add the coming neighborhood greenway on NW Flanders and existing paths on bridges and the Esplanade and you’ve got the bones of a pretty darn good — and mostly protected — low-stress central city cycling network.

It’s been a long and twisted journey for Better Naito — from an idea partly inspired by a shooting at a summer festival in Waterfront Park, to what the Portland Bureau of Transportation refers to as “a premier bikeway.”

After gaining attention with local elected officials due to a dire lack of space for walkers in the park adjacent to Naito Parkway during festival season, the project was kickstarted in 2015 by a “tactical urbanism” demonstration carried out by volunteers with Better Block PDX. Those volunteers ended up working hand-in-hand with PBOT and the idea to make the changes permanent won unanimous support from city council in October of last year.

The full Better Naito consists of a new, two-way protected mobility lane for non-drivers on the east side of Naito for over one mile between SW Harrison and NW Couch (the portion from Harrison to the Hawthorne Bridge is a separate, $12 million project). Plans also call for a new sidewalk on the west side of Waterfront Park. Wary of travel time delays for car drivers, PBOT will update traffic signals to minimize impacts for northbound drivers. (Aside: Some advocates hoped PBOT would claim all northbound lanes on Naito for the mobility lane and make the western section two-way for drivers, but alas, that was not to be. Yet.)

Check out the flyover visuals to see what’s in store:

PBOT Commissioner Jo Ann Hardesty said in a statement yesterday she liked the collaborative genesis of the project. “Partnerships between city government, community based organizations, and the private sector can bring out the best of Portland. As we look ahead to reinvigorating our city post-pandemic, I hope to see more collaborative initiatives like this across our city.”

Construction is expected last through the summer and wrap-up in December 2021.

They are really building this AND the Flanders Greenway but leaving the Naito Crossing at Flanders as a gap labeled “Future Naito Crossing” Every.Single.PBOT. Bike Project has a built-in gap. A network is only as good as its worst gap.

Yes, this is a critical gap that must be addressed. Last I heard the hold up was with the railroad.

It’s not like anyone at PBOT is unaware of this. The Naito crossing requires approval from both ODOT Rail and Union Pacific, and PBOT doesn’t have any leverage to make them go faster. The last I heard they were in design for the crossing, talks were happening, and they plan to be in construction next year. The interim detour on Couch/Davis to reach Flanders will be awkward, but I’d rather that the other two projects move forward than wait a couple years for the permanent solution.

Life is only as good as its worst bardo

It sounds like they’re going to tinker with the signal timing so northbound drivers will get rolling greens at a certain speed? Hopefully something like 15-20mph. I think that will result in more red lights for those driving south, but they will have two lanes to hold the traffic, so it shouldn’t be an issue.

So excited to see this finally come to fruition. I will be equally excited to see the massive public festivals return to waterfront park that necessitated the installation of Better Naito in the first place.

So long as we can keep those massive festivals from using the bike lanes in any way – such as fencing or line queues. Otherwise, it’s back to square one. I suppose having an actual sidewalk will help immensely in that regard.

Fingers crossed that the sidewalk will help. I’m guessing that will continue to be a problem, though. As will people queuing to cross the street in the middle of the bike lane.

This is pretty awesome!

Pictures worth a thousand words

The stop lights are a bit confusing. There are bike specific ones facing each direction at 3:38 and 5:12 Ankeny and Salmon respectively which makes sense since those are busier pedestrian crossings. For the rest the light is still oriented over the lane but only facing the northbound direction. Hopefully it’s just left in there as it is currently oriented and will be removed to avoid confusion.

Woohoo!! So glad to see this day finally coming. Kudos to PBOT and Better Block for all of their work to get us here.

4 million dollars on a road that is not a high-crash corridor while black people, immigrants, and other marginalized people continue to be disproportionately injured or killed in Outer East and North Portland.

4 million dollars on a facility that duplicates a MUP* 30 yards to the East.

#Such an ironic fact given the drama over Hawthorne.

*Could inexpensively be improved to allow for dedicated space for people rolling.

Well, all true points. But I’m telling myself this isn’t just a silly pet project getting plopped into Ladd’s Addition. And while there isn’t a preschool on our waterfront, there are preschools (and shops, and stores, and everything) block(s) away that will be easier to access because of the path. This is pretty much the spine of Portland’s bike network, about as central as any route can get. I hope this strong backbone leads to strengthening of our whole system over time.

I’ve said it before on here: any candidate that tells me we are going to do a 50/50 breakdown for projects east and west of 82nd would get my vote. But just because we are FAR behind in Outer East or North, doesn’t mean we should 100% stop working on core of network.

A protected bike path could have been added for far less than ~$4,000,000. For example, bollard/planter/bump/zebra-protected bike lanes are cheap and provide about the same “protection” as expensive 3 inch concrete curbs and fancy green surface treatment. An even cheaper option would have been to move car traffic to the western part of Naito. The decision to spend an enormous sum of money on a small stretch of duplicative multi-use path was more about “placemaking”# than bike network completion or safety.

Soren, I agree you have a good point. While I disagree that 1) this doesn’t provide access to business 2) it duplicates a MUP 3) the central city shouldn’t be a priority, I do feel you on how much money PBoT spends on perfect, finished projects vs pragmatic, separate infrastructure that can have a dramatic effect on people’s daily lives. We have been at a point of an emerging separated network for a very long time. Building that separated network in inner Portland (on Williams/Vancouver, E 7th, Hawthorne and E Broadway to start) with cheap bollards/planters and zebras would likely increase mode share dramatically. Building PBLs on 122nd will do the same for East Portland. It’s not either/or.

55k for Clifton Ave PBL in Cincinnati. Little less than a mile. Spread our money out and see what an amazing separated network in Portland we’d have in just a year. Here’s a pic of installation. We have the money already, but it’s not an administrative priority in PBoT.

While this is awesome it may be overkill. The area seemed fine to me except for connecting the Naito bike path with S. Harbor Drive for those of us going to the South Waterfront. I take this path daily from the Pearl area to the OHSU lower tram. I am a bit confused as to how to re-route. I don’t want to bike where people walk on the Waterfront since there are a lot of people out when it’s nice. Feels like I’m asking for a collision with a ped going that way.