With the help of 116 property owners who agreed to pay their share, the Portland Bureau of Transportation is ready to build the long-awaited Errol Heights Street Improvement Project. First envisioned in 2008, the $9.4 million project will pave 1.2 miles of gravel and dirt roads in a neighborhood just north of the Springwater Corridor path between SE 45th and 52nd avenues. 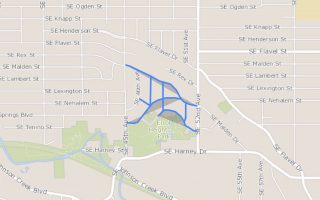 Streets in blue are part of the LID.

In addition to an innovative funding plan where the city worked with residents who agreed to make financial commitments to improve streets in their neighborhood, the project will also allow PBOT to create “shared streets” with a 15 mph speed limit. Streets signed for 15 mph are extremely rare in Portland and only occur on a few short stretches of road citywide. As part of the project, PBOT will also add street traffic calming elements to keep driving speeds down, add street lights and trees, and improve stormwater management.

“Kids [could not] ride their bikes on the street outside because… they have to share the street with cars that swerve all over to avoid potholes.”
— Errol Heights resident

“As a pilot project for the city of Portland’s Neighborhood Streets Program, the project is an opportunity to highlight cost-effective designs for neighborhood streets and stormwater management, which can be used in areas that would be difficult or costly to serve,” reads the project website.

At Portland city council on Wednesday, PBOT project managers revealed that $1.64 million (or 18%) of the project’s $9.4 million tab will be paid by residents through a process known as “local improvement district” (the Bureau of Environmental Services and the Water Bureau are also funding partners on the project). To help raise money to make the changes, the City of Portland plans to assess each property owner $2.55 per square foot for an average of $14,137 per owner. PBOT will pay the fee up-front and then a lien is placed on the property which is then due when sold. (NOTE: PBOT wants to clarify that the LID has not yet been formed. The project managers will return to city council in March with an ordinance for adoption and will hold the official LID formation hearing at that time. Yesterday’s council action authorized PBOT to begin the official formation proceedings.)

When this project was first proposed in 2008, the cost for each property owner was around $80,000. PBOT worked to find as many other funding sources as possible in order to get the cost-per-property to a more manageable amount. Over 80% of property owners support the LID.

By accepting the deal, property owners will get smooth new streets where they can feel safe walking and biking.

“My kids could not learn to ride a bike outside the street,” said one Errol Heights resident who testified Wednesday. “Even my neighbor’s kids — none of them can ride their bikes on the street outside because there is no place for them to ride and they have to share the street with cars that swerve all over to avoid potholes. A paved street is something we need as a neighborhood, just to help kids be able to play safely outside on sidewalks.” 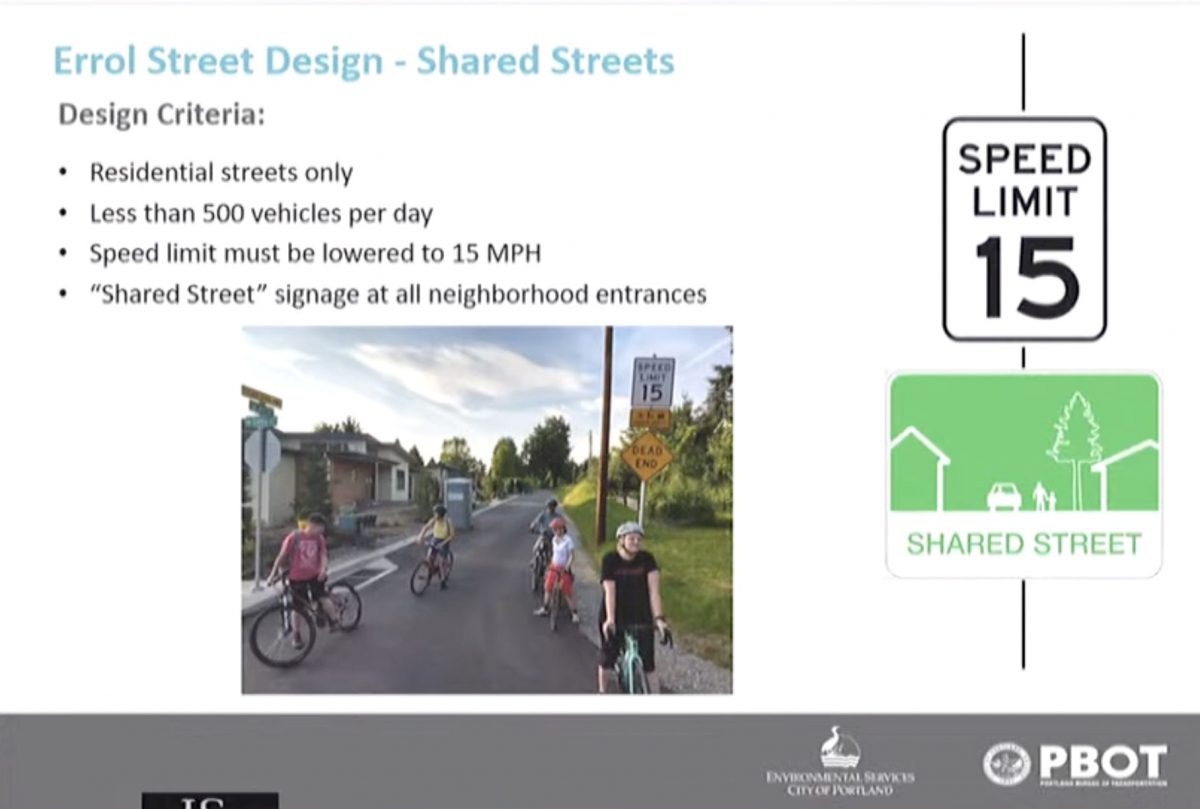 PBOT Project Manager Elizabeth Tillstrom said the shared street design will mean, “Everyone can use that space equally as pedestrians, cyclists or motor vehicles.” State law dictates that if PBOT wants to sign a street for 15 mph it must carry less than 500 cars per day (the threshold for neighborhood greenways is less than 1,000 per day) and have special shared street signage. While the majority of streets in the neighborhood will be shared, the main access streets of SE Tenino and SE Malden will be “separated streets”. PBOT says the design on these will include sidewalks to “pull pedestrians out of the roadway”.

PBOT traffic models showed that the newly paved roads could result in more cut-through traffic: “So we want to ensure that pedestrians are safe,” Tillstrom said. To do that PBOT will build new traffic calming features to keep car trips and speeds as low as possible. The new roads will be chicanes that are intentionally curvilinear and will have speed bumps.

Before voting to authorize the project yesterday, PBOT Commissioner Jo Ann Hardesty praised the cross-bureau collaborations and called it an “Incredible effort… in a community that has lacked sidewalks and infrastructure for so long.” “I’m really excited about this project on a personal level,” she continued, “because you are in my neck of the woods.”

The project is expected to break ground in July of this year and be completed by late summer 2022.

Mixed emotions! So glad safe streets are getting attention in my ‘hood and that my neighbors feel it’s worthy of investment. A bit worried about paving over many of my favorite “unimproved” streets where me and my little bike club (felony flats hill killerz) like to roam on hyper-local gravel grinds. Fingers crossed on best results!

Can we use the criteria for shared streets on neighborhood greenways?

I hope the speed bumps aren’t those ineffectual ones with the tire cut-outs to make it so you don’t have to slow down.
I seriously don’t see the point of those.
All the swerving to avoid potholes could just become swerving to use the “tire-cuts” or whatever they are.

That said, this looks like a very promising project.

I’m curious if some of the shared streets would qualify as “narrow residential roadways” (or could be altered to qualify). And if so, could the speed limit then be set at 10 mph, vs. 15 mph (which is a great improvement in itself)?

Lawyer Scott Kocher said that not only CAN PBOT do 10 mph speed limits on those streets, they’re REQUIRED to. “That means all Portland streets in residence districts that are 18 feet or narrower — not including shoulders or parking — must be posted 10 mph.”

“Over 80% of property owners support…”

I just added a note to the story to clarify something important. PBOT reached out to say:

It’s important for the public to know that the Local Improvement District has not yet been formed. The Project Managers will return to Council in March with an ordinance for adoption and will hold the official LID formation hearing at that time. Yesterday’s Council action authorized PBOT to begin the official formation proceedings as outlined in City code 17.08.070. Anyone who wants to learn more, should see our project website.

“assess each property owner $2.55 per square foot ”
square foot of what? house size? lot size? frontage? footprint of whole project? unclear in article (to me at least) and haven’t found it in docs yet.

Who needs a twenty-eight foot wide street with that amount of limited people driving cars and trucks? Why not make a shared street like the one two blocks north of West Burnside in old town?

The rights of municipalities to assess taxes are quite broad and could be seen as scary by those unaware with how they work. Given that we have amazingly overbuilt infrastructure in the USA I expect this sort of thing will be used more and more in coming years. There is a sweet spot between too high and property owners will just ditch their assets and too low and the city is broke.

This is the road configuration that has always been pushed by the city because it’s cheaper (with the guise of “safety”). I guess it’s better than nothing.

So upscale malden gets fancy streets and poor malden (up near 82nd) gets bombed out roads.

And the city says “tough luck”

One other aspect of this project (I have not seen mentioned here) is storm water management, given that these roads are uphill from Errol Heights park. The city has been pushing that angle for a number of years.

Rules of the Road Legal Clinic