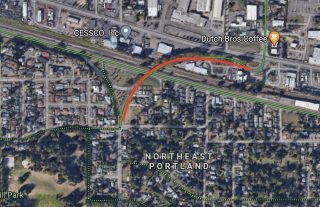 A key connection between northeast Portland neighborhoods and the Portland Airport, Whitaker Ponds Natural Area, Columbia Slough, and other destinations has a major upgrade in the works. PBOT plans to break ground as soon as later this year on a $17 million project to replace the 42nd Avenue bridge over Northeast Lombard.

Portland City Council authorized the project back in 2018 with a $3 million down payment from Mayor Ted Wheeler’s Build Portland program. That program returns property taxes from expiring urban renewal areas back into the city’s General Fund.


The 42nd Avenue overpass sits between the Holman Street Neighborhood Greenway in the Concordia and Cully neighborhoods and the new protected bike lanes on 47th (which aren’t quite finished yet). Currently there’s no bikeway on the bridge and bicycle riders share the space with car users who have a 35 mph speed limit.

Beyond its inadequacy for bicycling, the overpass is an impediment to freight truck drivers. Lombard (US Route 30) is designated as a major freight route and the current bridge is so low (15 feet, 10 inches) that large-haul truckers go out of their way to avoid it. The Portland Bureau of Transportation sees replacement of the bridge — and raising it to nearly 18 feet of overhead clearance — as a key part of their strategy to smooth out east-west freight movements.

Keeping with the freight committee’s preference to separate bicycle users from freight truck drivers, the new bikeway on the bridge will be grade-separated. The new bridge cross-section will have two 13-foot, general purpose lanes with 10-foot wide multi-use paths on each side. That’s a huge upgrade from the narrow sidewalks and in-street sharrows we have today.

A new bridge will also open up possibilities for a better bikeway on Lombard below it.

Many of you will recall the preventable death of Martin Greenough. Greenough was new to the area and was biking in a bike lane gap under the 42nd Ave bridge when he was hit and killed in December 2015. His tragic death was partly due to ODOT’s dangerous street design and they responded by settling a lawsuit with Greenough’s family and building a new bike path on the south side of Lombard.

But ODOT didn’t do anything to the same, dangerous gap on the other side of the street (in photo above). They claim bridge supports and an adjacent railroad line don’t leave enough space for a bikeway. At this morning’s meeting, PBOT’s Wagner said the new bridge will provide that space. “Right now, the bike lane drops underneath because of the bridge support and bikes have to merge into traffic. This is a 45 mph road and it is not a good situation,” he said. Wagner said it will be up to ODOT if they choose to create a separated space on the north side of the street similar to the one they created in response to Greenough’s death.

With the new bridge likely to be completed by 2023, ODOT might want to draw up some plans.

This is great news, I use this overpass frequently, as in many times a week.

BUT!!! What is the deal with the brand new MUP’s on 42nd from Cornfoot to Columbia being partially filled up with pickups full of pallets? Who can I call to complain about this, because if this isn’t nipped in the bud, that MUP might as well not even exist.

Hold your fire Hotrodder. As I mentioned in a story yesterday, that project is not complete yet. I have a feeling there will complaining that needs to be done once the project is finished, but let’s give PBOT and the biz owners a chance to figure that out first.

My apologies. I didn’t see that article, (thank you for posting it) and I’ll hold my water till the whole project shakes out. I guess I was so glad that something was being done on that stretch that I was equally crestfallen when the instant the construction finished, half of the Northbound MUP was being used for business, forcing me to take the lane for a couple of hundred feet..

“Lombard (US Route 30) is designated as a major freight route and the current bridge is so low (15 feet, 10 inches) that large-haul truckers go out of their way to avoid it.”

Others have aptly questioned whether Lombard should be designated as US 30 and a major freight route. I can’t say I’m too excited about this aspect of the project that will presumably increase freight traffic in areas ill-suited for it.

Momo
Reply to  Gary B

Over-dimensional freight accounts for a teeny-tiny percentage of freight trips. We’re talking about moving houses or other massive items periodically. Any normal semi truck can already fit under a 15’10” road, so it’s not like this will make any practical difference either way in the number of trucks on Lombard.

It’s nice to know that 10-foot curbside sidewalks are no longer sidewalks in Portland, but multi-use paths now. Try to remember that next time police pull you over when riding on the downtown 18-foot wide multi-use paths on every blockface.

That’s not really a fair comparison, given that there’s a city ordinance specifically prohibiting bicycling on sidewalks downtown. It’s allowed everywhere else. I’m not saying it’s a good law, but it’s not like it’s totally arbitrary.

If they aren’t sidewalks, why does the ordinance matter? Just change the definition to “human-powered micromobility devices on downtown multiuse pathways.”

That’s so police can continue to.tarfet minorities on bikes…and if that fails, just generally harass riders.

Last time I rode this (a number of years ago) I seem to remember needing to pick up some pretty good speed to stay ahead of car traffic — and being able to do it in the northbound direction. Isn’t this a significant downhill? I think the 10-foot MUP on the east side is going to prove inadequate if pedestrians actually use it.

Looks like that will be a great improvement. Thanks for the update!
PS I hate that tagger ‘PARLE” (on the bike sign in the photo). That guy creates so much graffiti. I bet he does many thousands of dollars a year of damage.

“Right now, the bike lane drops underneath because of the bridge support and bikes have to merge into traffic. This is a 45 mph road and it is not a good situation.”

To be clear, “drops underneath” and “merge into traffic” means the bike lane dead-ends into a bridge footing, putting people on bikes or walking or rolling out into the lane with 50+ mph traffic for the entirety of the long, dark stretch under the overpass. All a driver has to do to hit a person under there is nothing. A driver who simply keeps driving along in a straight line, just like most drivers would expect to do for most of their trip on Lombard, is plausibly likely to kill someone. As has happened before.

ODOT fixing the EB hazard that killed Martin Greenough but ***not fixing*** the same hazard for WB (which presumably would route a bike lane behind the bridge footing and require a small retaining wall) is an extraordinary disrespect for the lives of Martin Greenough and the other people affected, and a disregard for the safety of everyone who walks, bikes and/or rolls.

Other ways to fix it would require revisiting whether Lombard should continue to operate in the current high-speed, multi-lane configuration that makes it–and its parallel neighbor Columbia–High Crash Corridors. Both are littered with fatality and serious injury crashes: https://pdx.maps.arcgis.com/apps/MapSeries/index.html Both are a blight on the neighborhoods around them, which include neighborhoods currently struggling with increased drug and gun violence and other consequences of disinvestment.

45 MPH Lombard is too fast and dangerous for bike lanes, IMO. This facility should have a protected MUP on the north side.

eawriste
Reply to  Chris I

Exactly. And ODOT’s budget and mandate should reflect this huge need before focusing on any highway expansion.