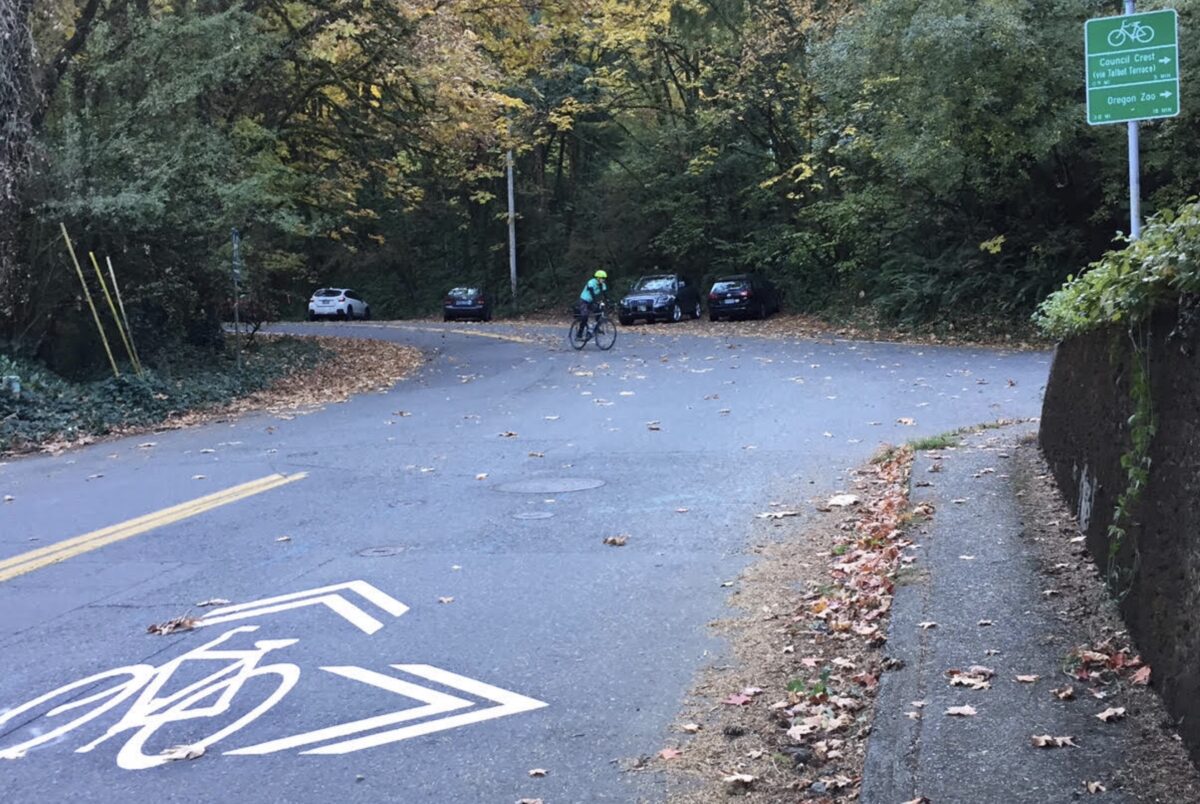 The gentle curves the trolley required to make its turn encourage the sloppy lefts and cross-intersection diagonals that plague both intersections today.

Idyllic as it is, first time riders of this route abruptly find themselves two-thirds of the way up the hill, facing busy SW Patton Rd with no idea how to proceed. When the rider does manage to find SW Greenway Ave, they have to navigate a tricky intersection with well-known traffic control problems. One neighbor described it as “the intersection where everyone thinks they have the right-of-way.”

The difficulties with the Patton-Greenway-Talbot intersection (and Vista-Patton-Broadway directly east of it) arise from having been built over the track of the old Vista trolley line to Council Crest. The final leg of the trolley line jogged west off of Vista onto what is now SW Greenway Ave. The gentle curves the trolley required to make its turn encourage the sloppy lefts and cross-intersection diagonals that plague both intersections today, as well as the poor sight lines. 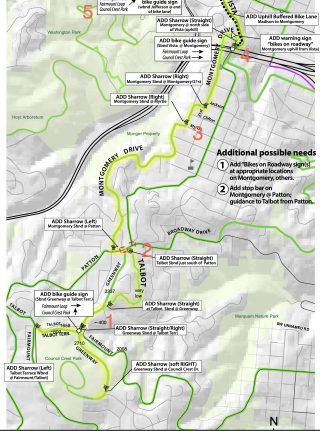 Portland Bureau of Transportation Neighborhood Greenway Program Manager Scott Cohen realized that by combining two projects from the Southwest in Motion (SWIM) plan — the Montgomery Wayfinding project and a Safe Routes to School-identified crossing enhancement at Greenway Ave — he could arrive at a better intersection design.

The project attempts to rationalize the intersection. In other words, it coaxes its irregular shape into more of a standard box. This improves sight lines for all intersection users and makes turning behaviors more predictable. Some of the changes are subtle; such as the extension of the eastern Patton Rd centerline further into the intersection, and the relocation of the northbound Greenway stop sign to the new zebra crossing. Both serve to tighten the intersection box which should make it easier for bicycle users riding north on Talbot or Greenway to make their presence felt at Patton.

The project garnered a lot of neighborhood interest. The Southwest Hill Residential League Transportation Committee (corresponding neighborhood association) met on-site with neighbors and packaged all the feedback up for PBOT staff. In response to this input, PBOT made design changes to their original plan. The plan is not yet complete and small changes may still be made, but it’s coming along nicely. Some sharrows and signage have already been installed. More significant striping and hardscape changes (curb extensions, median island) will be done in spring 2021.

This combined project is one of several area bike projects on the SWIM project list aimed at achieving the connected bikeway network described in the Bicycle Plan for 2030. Other projects include improvements to SW Fairmount, SW Hewett and the Talbot-Patton-Humphrey intersection.

— Lisa Caballero has lived in southwest Portland for 20 years. She’s on the Transportation Committee of her neighborhood association, the Southwest Hills Residential League (SWHRL), and she is passionate about improving the active transportation infrastructure in southwest hills.

— Get our headlines delivered to your inbox.
— Support this independent community media outlet with a one-time contribution or monthly subscription.

Montgomery is a lovely street, I remember it well from when I lived in Goose Hollow soon after moving to Portland in the late 90s. Thank you for reporting on these needed changes.

I commute between downtown and Council Crest daily. These are well appreciated, long needed improvements. I would request that PBOT investigate traffic calming measures on Fairmont to protect not only bikers but the hundreds of walkers and runners on the loop. Over the last few years it has become a shortcut route for OHSU commuters from Washington County who ignore the speed limit. The intersection at Gibbs is especially dangerous due to the steep grade and poor site lines.

It would seem making Fairmont one way would make a ton of sense to provide adequate biking and walking infrastructure.

But then someone who lives on the far end of the one-way route would need to drive further to do errands. And that would be unacceptable.

They’d have to drive further every auto trip, not just errands. And people living there have a near-1’000 ft. drop leaving and the same climb returning for many typical destinations, making walking and biking less practical for many people. Fairmount is long enough the extra travel distance would be significant for anyone near the north ends.

For a while I rode through here daily on my commute over the West Hills. Learned to avoid that Patton/Talbot/Vista/Broadway cluster, and just take Montgomery. Worst part was the misaligned crossing over Vista, honestly.

“The project attempts to rationalize the intersection. In other words, it coaxes its irregular shape into more of a standard box.”… I’m not down with this kind of solution. If you can’t add it up on arrival, you were going too fast for the conditions.

… or you have too many traffic movements flowing into the same all-way stop, or the sightlines and crossing distances are too long to allow for effective right of way negotiation.

I love riding up there but it will never be part of any regular commute for me. Plus I’m usually so freaked out by the steep grades that I’m either riding my brakes or breathing hard to make it up the hill. I’m focused on Maslow level-1 needs (survival), so alignment of the intersection is usually the last thing I’m thinking about.

I used to bike that route. To the South of Vista on Montgomery are some hidden public steps. Bypassing Greenway, they make a nice alternative carrying the bike up the stairs.

Having just ridden up SW Montgomery from downtown for the first time in YEARS, because the Madison Trail never seems to be open, I was pleasantly surprised to find the sharrows on upper Montgomery. However, I first needed to cross Vista at Montgomery, and darn near got wiped out by someone driving uphill on Vista. There’s no line of sight for the drivers on Vista. Apparently no “there might be bicyclists and pedestrians crossing up ahead” signs either. Still working out the best way to cross. Turn R onto Vista and then cross to upper Montgomery just across Vista? Dunno.