There’s good news and bad news about TriMet’s upcoming project that will close the upper deck of the Steel Bridge for four weeks in August. 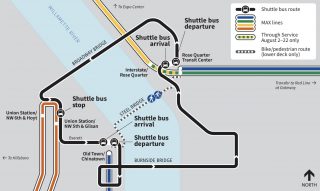 First the bad news: The project means the upper deck will be closed to all users — including bicycle riders. That’s unfortunate because the sidewalk and lanes of the upper deck are a nice option for biking on when you’re in a hurry and/or don’t want to deal with crowds on the Waterfront-Esplanade path. This is especially true for folks wanting to keep a distance from others.

The good news is that TriMet will finally make significant upgrades to this major bottleneck on the aging and ailing Steel Bridge. This means more reliable service at a time when we need our transit system to be as strong as possible to compete with driving trips if/when downtown commuter traffic ever gets back to normal.

According to TriMet, their Steel Bridge Improvement Project will close the upper deck between August 2nd and 29th. The work will disrupt all five MAX light rail lines (the bridge handles 623 trains a day!) and buses will be used to shuttle riders around the work zone. TriMet says shuttle buses will depart every two to five minutes between the Rose Quarter and Union Station. Five bus lines and car traffic will also be rerouted to other bridges.

TriMet says people can expect an extra 30 to 45 minutes of travel time — unless of course you can go by bike or some other non-transit, non-driving method.

The Steel Bridge path will likely be much busier during the closure, as will nearby bridges like the Burnside and Broadway.

Below is an animation of the shuttles and closure impacts:


Learn more about this project at TriMet.org.

I think our region really needs to evaluate the idea of a MAX line down SE Powell. Connecting the I-205 line and the Orange line would create opportunities for several new services, and add operational flexibility. A Y-junction at I-205 would allow both north and southbound trains to serve the Powell line. Under normal circumstances, the Green Line would route from Clackamas north, and then west on Powell and over the Tillicum to downtown. A second line could run from Gateway into downtown along the same route. This would take a lot of pressure off of the Steel Bridge, and permit increased service on the lines that do use it.

During periods of Steel Bridge closures, the Airport and Gresham lines could continue south on the I-205 corridor, and then west to downtown along Powell.

I’m not sure how they plan on dispatching trains for the Orange Line during this closure. How do they get trains from Elmonica to the N/S line downtown without being able to use the Steel Bridge?

Kittens
Reply to  Chris I

Running light rail on inner Powell and outer Division was openly proposed during the early Division BRT meetings. Outer Division can’t handle light rail because one of the main Bull Run water aqueducts runs down the center of the street. Outer Powell has another aqueduct on the north side of its narrow right-of-way. (Caruthers has the 3rd aqueduct, under a series of local streets and private properties.) The issues of LRT on inner Powell are the same as for BRT – an unwilling landowner in Salem who keeps pushing for more highway lanes where they are not wanted – a big new 1970s Mt. Hood freeway on Powell is OK, but not modern high-capacity light rail transit.

It’s too bad the Springwater has a popular trail on it – the corridor would be ideal transit line, as it once was 100 years ago.

The region built out a $2 Billion light rail system with a single point of failure — the Steel Bridge.

Well, yeah, it has grown over thirty years this way. You could also say I-5 from to Portland to Seattle is essentially a single point of failure system too. Many networks are similarly brittle.

I-5 was regularly closed near Centralia for flooding until just recently. There are many weak points with essentially no viable alternative.

The Steel Bridge was once upon a time the main bridge for the original I-5, back when the road used to run along the west side of the river on what is now the Tom McCall Waterfront Park. That’s why there’s still a lot of unused concrete spaghetti near the bridge.

Has anyone looked at Trimet’s work zone / detour plan for this bridge closure?

Just curious if it includes any enhanced bike lane capacity (wider coned lanes or bike crossing signal timing changes) for the alternative routes…especially as many are choosing to replace transit trips with bike trips…I know it may be a dream…but this is Biketown! with lots of smart bike planners/ inspectors in the bureaus.

It would be great if the ridiculously narrow sidewalks could also be widened! They are a helpful option, especially when the lower deck is closed, but they are too narrow for two people in normal times, and especially now. Who on earth thinks that a sidewalk that can accommodate just one person is acceptable?

Most of the sidewalks in Portland are currently covered with garbage. Bigger sidewalk equal more garbage. There is more than “our” share of garbage in this once beautiful city right now. The sympathetic folks are not out cleaning it up.

Surprised council has not spearheaded a major citywide sidewalk widening program, not for use of walkers but to allow more “urban campers”

Unfortunately this project will only address replacing the rails and signals. No other changes or upgrades will take place. That will be $3,000,000 please.

All of this work is expensive, and only a few firms can do it. It sounds like you have an opportunity to start your own rail renewal contracting company.

Neither the city, nor the county, nor the state, nor even humble old Trimet owns (and operates) this bridge. It is still privately owned by Union Pacific (though I believe there are ongoing negotiations to transfer it to the county.) UP’s pedestrian policy includes the phrase “No Trespassing” on most of its land, which probably goes a long way in explaining the narrow sidewalks. Given the bridge upper deck design, I suspect that when the bridge was originally completed in 1912 that only the inner two lanes were for motorized traffic and street car.

Some good info on it in Wikipedia: https://en.wikipedia.org/wiki/Steel_Bridge

Note that the news release has a lot of errors (such as text saying “Shuttle buses will run between Interstate/Rose Quarter and Lloyd Center/NE 11th Ave stations” and that there’s going to be an airport shuttle from Kenton). More accurate info is on their alert page: https://trimet.org/alerts/steelbridge/index.htm

Who is doing the actual work, Trimet, Union Pacific (the bridge owner), or a contractor? And who is paying for all this?

Not sure that “nice” is the operative term.

On the sidewalk, passing slow bikes is impossible and passing peds is awkward — so the sidewalk isn’t awesome except when no one else is there (though it is still better than the path below)

The upper deck is sometimes even slower than the sidewalk with a couple of peds on it due to the hopeless traffic situation. But it also can be quite fast and suitable only for strong riders comfortable in heavy traffic (especially if headed south and needing to turn left on Interstate)

If COVID-19 hadn’t collapsed the rental car industry I would have to drive to work at PDX during this construction. The first WES out of Tualatin is at 6:01, can’t leave any earlier and spending three hours to get home in the evening is not acceptable.

In a perfect world the Steel Bridge should have been replaced in the 1980s when the MAX started.