Portland Police responded to two fatal collisions Saturday night within about three hours of each other. The deaths push Portland’s yearly total to 10, that’s twice as many as we had last year at this time.

The first one happened around 6:30 pm at SE Powell Blvd and 34th. This section of Powell is State U.S. Highway 26. It has a five-lane cross section with the standard ODOT orphan highway feel: there’s no shoulder or bike lane and the speed limit is 35 mph. All police have revealed so far is that the collision involved a motorcycle operator and an SUV driver. The motorcycle rider was dead when police arrived. The driver remained on the scene and was not arrested. 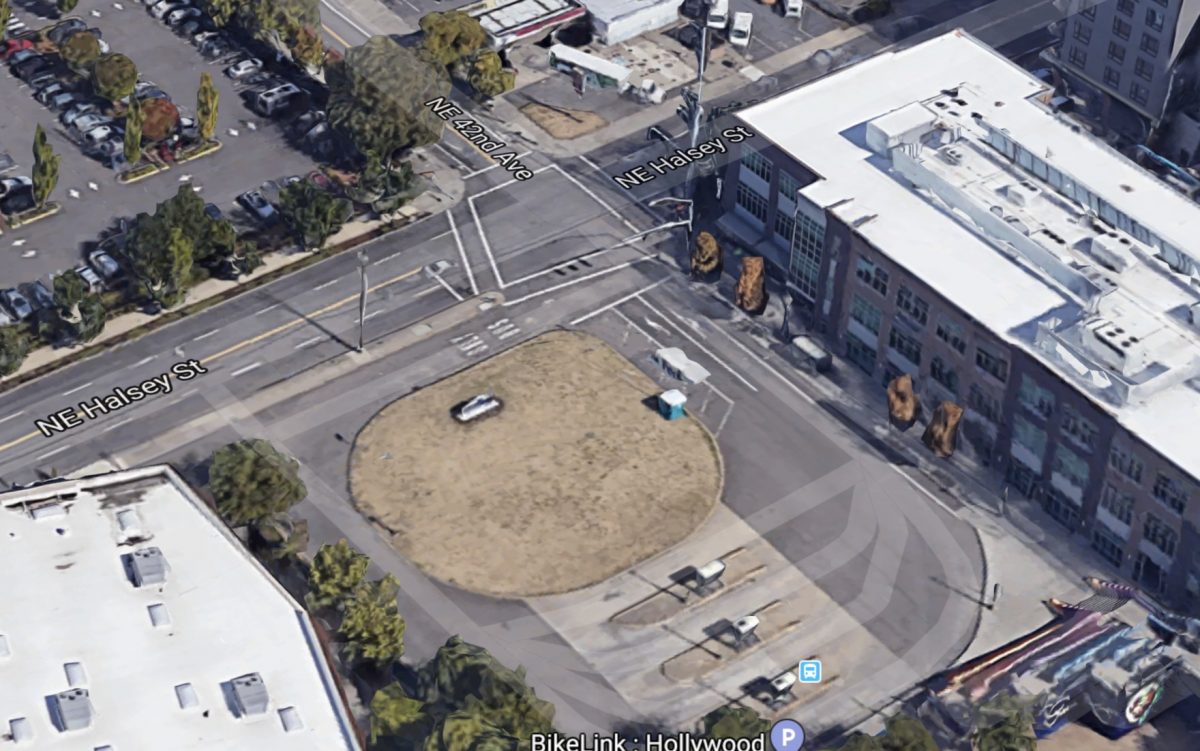 The second fatality happened just after 9:30 pm right outside the Hollywood Transit Center on NE Halsey at 42nd. This section of Halsey has a four-lane cross-section with no shoulder or bike lane. The speed limit is 30 mph. The driver in this collision left the scene after their car hit someone who was walking. Police are still looking for the driver.

This location is adjacent to a major TriMet transit center (bus and light rail). Asked about possible video footage of the collision, TriMet said their legal department is processing the request and it could take up to five days. If they have footage, the District Attorney and/or police will decide if it will be released.

TriMet is currently working on their Pedestrian Plan which focuses on “equity, safety, and demand”. “Safety refers to reducing risks of traffic injury or death for people walking to transit,” the agency states in their online open house (which is open until March 6th). TriMet says the plan will prioritize dangerous areas around transit stops such as “barrier streets”. Halsey creates an unnecessarily dangerous barrier to the transit center and the 42nd Avenue overpass of I-84, which is a key connection in the cycling network.

According to the BikePortland Fatality Tracker (below), Saturday’s crashes bring our annual death toll up to 10. 8 of the people killed so far have been vulnerable road users.

The deceased person is identified as Chantel Downs, 36, of Portland. Her family has been notified of her death.

The suspect and the vehicle have not been located. If you have any knowledge of the driver or the vehicle please contact the primary investigator, Officer David Enz at David.Enz@portlandoregon.gov.

Isn’t Powell listed as US26 not Oregon 26? I have no doubt that ODOT manages it; in general all state DOTs manage both federal highways and state highways (and all county roads in VA, WV, & NC.)

Powell is a safety disaster, and ODOT has long resisted all efforts to even measure the speeds people drive along this urban corridor through a heavily populated area.

I used both of those intersections last week. I now know my discomfort is justified.

Yes, your discomfort was justified. Those are both ugly places to walk. I just walked across NE Halsey at 42nd on Saturday, the same day the pedestrian was killed. I wasn’t even sure quite what to do when the west crosswalk across Halsey dumped me out onto that little concrete median island strip on the south side with no sidewalk in sight. Drivers in that part of the Hollywood District that day were doing various strange and aggressive things. Not good.
(The funny part is that I’d just been at the local pool, facing one of my fears by swimming in the deep end. It looks like there are more urgent things for us to be afraid of!)

Chris I
Reply to  Kerry

I’d like to see them ban left turns from Halsey at 42nd. The risk to pedestrians is too great, because drivers are focusing on the 2-lanes of westbound traffic, and often force an unsafe, rushed turn. And don’t even get me started on the people coming in/out of the 24-hour Fitness lot, and then the right-turn on red without slowing down drivers from the freeway exit… this whole area is a mess.

Good point about the swimming. I know a lot of people who surf/kayak/paddleboard. Every once in a while there are discussions about sharks, whether beaches should close after shark sighting, whether people think some beaches are dangerous due to sharks, etc. Then someone points out to the people afraid of sharks that your chances of getting killed getting to the beach are something like 1000x greater than being bit by a shark, making shark danger irrelevant in comparison.

My observation is in the last few years about 25% of Portland Area drivers have become a class of low level criminals. By this I mean they are a group that habitually and knowingly breaks traffic laws on a regular basis. I don’t need to take up space detailing all the instances of this I have seen in the last week alone because everyone here has seen the same thing. I don’t think it is just a lack of enforcement either, as many of the things I see these driver’s do put themselves at risk as much or more than others. Unless something drastic changes, I am afraid it will only get worse. I sometimes feel like I am living in the movie ,”Idiocracy”.

The deceased person is identified as Chantel Downs, 36, of Portland. Her family has been notified of her death.

The suspect and the vehicle have not been located. If you have any knowledge of the driver or the vehicle please contact the primary investigator, Officer David Enz at David.Enz@portlandoregon.gov.

Why is TriMet making the police wait until Friday to see the video footage?

Reading this made me wonder, why no mention of the person who was killed crossing West Burnside a week or two ago? Then I remembered they were only badly injured. There are so many people walking and biking killed here that being badly injured almost goes under the radar.

The Powell Boulevard project was officially designated as a “safety” project. I attended at least three open houses conducted for the project since my children attended Cleveland High School and I regularly cross Powell by bike at 21st, 26th or 28th Avenue.

At every open house, I dutifully filled out the questionnaire, wrote comments on the posters, and talked with ODOT and city representatives. I suggested lower speed limits, photo enforcement, and other things to improve safety. Among my specific complaints was the lack of attention to drainage grates at 21st and 26th. I suggested curb inlets instead of surface grates. The response was “they are not in bike lanes” or some such excuse.

My contention is that every ODOT roadway reconstruction project, and especially every “safety” project should include photo speed enforcement cameras. It would be better if they were armed with paint guns, but cameras would be ok.

Every time I go through the intersection of 26th and Powell, I see someone blow a red light. The “safety” provisions made with the project don’t seem to have helped. We could try enforcement; the absence of enforcement isn’t working.

On the plus side, now that people have died, maybe PBOT will consider making safety improvements at these locations so it will be less likely to happen again.

Like what? A crossing guard to make people look at the signals that are there?

In the few instances that I’ve seen PBOT respond to pedestrian deaths by making serious safety changes were on Glisan at 78th, Glisan at 117th, and 136th at Harold. In other words, it’s not unknown, but it is very rare.

I thought I read that PBOT will now respond in places where people had been killed.

Perhaps the real pandemic striking our communities are the injuries and deaths on archaic city/county/state mid-century arterials…please mayor, county chair, governor declare a “health and safety” emergency to road diet these dangerous arterials. Paint and RPMs for now until they can be reconstructed completely.

This is ow also Eudaly’s fault?!

A record number of fatalities since 1997 says something needs to change. When Sam Adams takes her seat let’s hope he can turn this trend around.

It’s absurd to lay the increase in traffic fatalities at Eudaly’s feet. You can’t be serious it’s not as simple as the spokesperson for the department is the reason for all the problems that arise.

That’s a pretty weird take on these road deaths. One road not controlled by PBOT and another that is on a list of unfunded projects for safety improvements. How exactly is any of this the commissioner’s fault?

These deaths were not the fault of any commissioner or city official. There is one commissioner, however, who has an outsized voice in the sorts of projects PBOT prioritizes. Whether PBOT has the right priorities is left as an exercise for the reader.

Eh I think you’re overestimating her influence. At most she can suggest priorities and put it up to a vote in the council. PBOT engineers and managers are still the ones coming up with the plans to meet the City’s goals and a majority of the council has to vote to approve their budgets and project priorities. It’s like the Rose Lane blow back directed at her. All those people complaining online seemed to have missed the part where the whole council voted to move forward with the project.

I wish she would light that fire.