When I first saw the Sprockettes in 2004 I had no idea they were the top of a cycling culture iceberg that was so inspiring to me that I’d spend the next 15 years of my life devoted to documenting it.

With fresh eyes from Southern California, the blur of smiles and hi-viz pink bodies and bicycles rolling in the street and dancing to a makeshift sound system in front of an appreciative crowd was something I just couldn’t fathom. What the hell is going on? I wondered. It was ridiculous, preposterous — and I loved everything about it.

Tonight the people who created and sustained this amazing part of our community for over 15 years will come together for one last dance.

Formed on a whim in 2004, The Sprockettes have been a mainstay even as many other parts of our bike scene have changed. During their reign, these hard-working and passionate women never forgot what they stood for: a DIY ethic, body positivity, the power of bicycles, knowledge sharing, free fun, creative street culture, the value of a strong community, and so much more.

It’s hard for me to put into words what this group means to me and to Portland more broadly. Below are a few of the nearly 1,000 images I’ve published of them over the years and a few more thoughts… 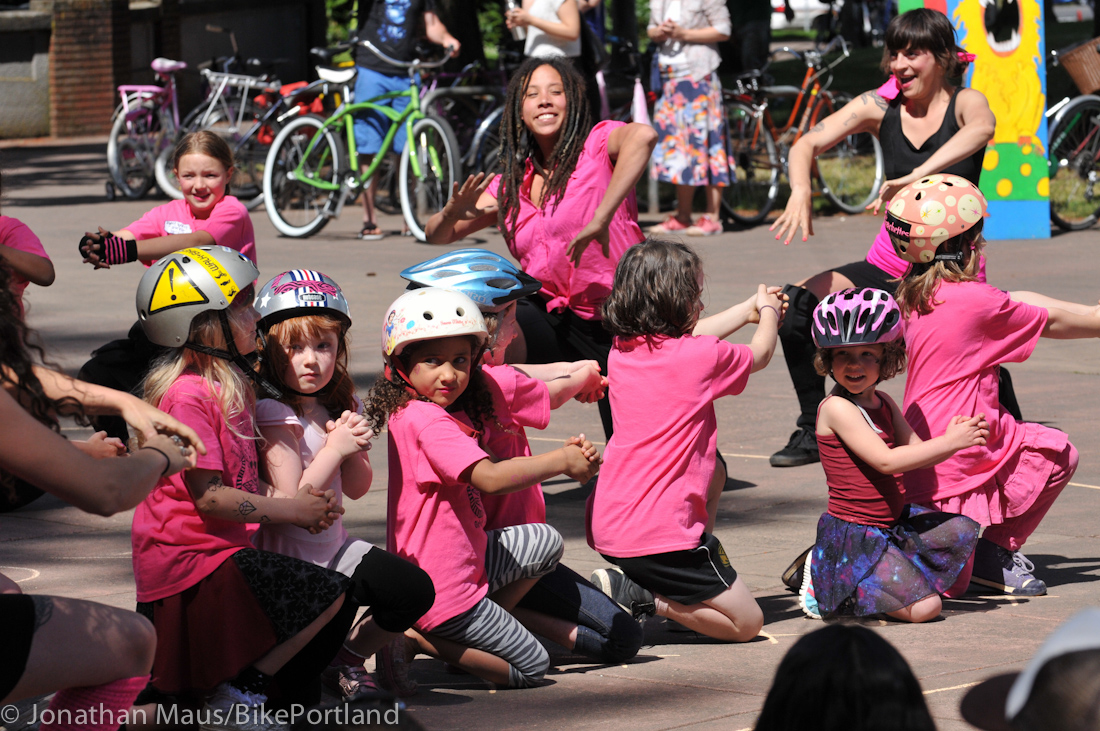 One of the coolest things they did was an annual summer camp for girls. It was super cheap (free for those who couldn’t pay) and the kids (including my girls!) absolutely loved it. What could be better than teaching young girls that bikes are awesome and you can be beautiful and strong and have fun while doing it?

The Sprockettes were part of a fascinating cycling culture milieu. By the late 2000s they had inspired several similar dance teams across the country and globe. It was nothing short of a bike dance revolution that included: The B:C: Clettes and The Brakes (an all-male group!) from Vancouver, British Columbia; The Bottom Brackettes from Eugene; the Velo Vixens from Victoria BC; the Derailleurs from the Bay Area; Portland’s all-male dance team, Chain Reaction, and several others. (Several of the groups came to Portland in 2007 to perform at the Multnomah County Bike Fair.)

I think it’s also notable how The Sprockettes were a bridge between cultures. They connected the punk and freak bike crowds with the more staid commuter and political/advocacy crowds. This cultural cross-pollination was the magic sauce of Portland’s Golden Age of Cycling between 2005 and 2010 (roughly).

Speaking of cross-pollination, there was that time in 2011 when a cyclocross racing team dressed up as The Sprockettes at the annual Bend Halloween races. And check out the big crowd at the Pedalpalooza ride they led in 2010.

The Sprockettes transcended Portland, and I don’t mean because people could see them on the Internet. In 2008 I joined them on their Operation Bike Nation tour sponsored by New Belgium Brewing. In an old school bus, they drove from Portland and performed in Ashland, Davis, San Francisco, Truckee, and Boise, Idaho.

Portland won’t feel the same without knowing The Sprockettes are still meeting at a park to practice and dancing in the streets. Lucky for us we have one last chance to revel in our collective love of bikes and the wonderfully ridiculous things they mean to us. See you tonight! 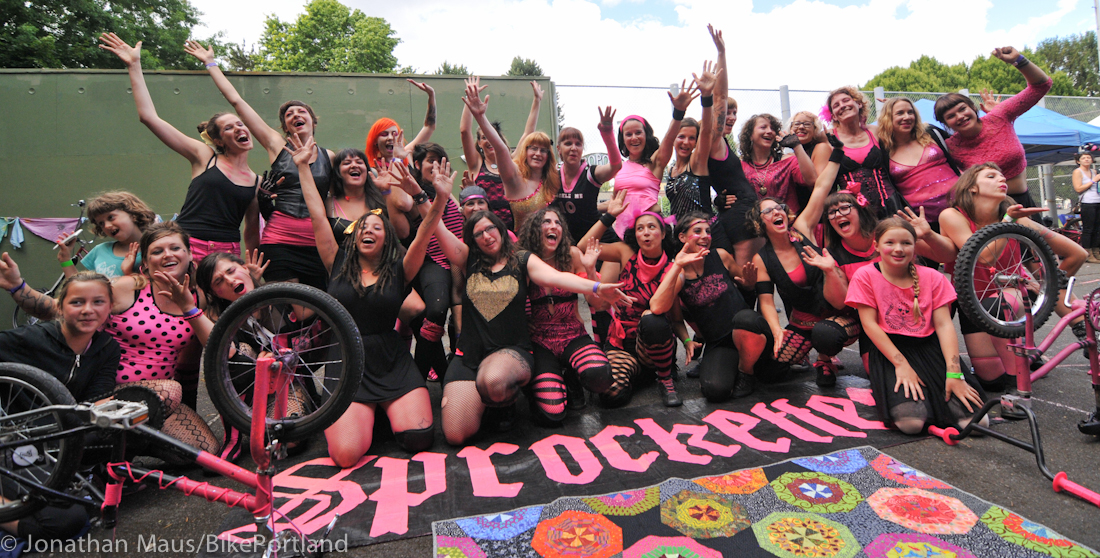 – Check out my Sprockette photo album on Flickr for nearly 900 images of their performances throughout the years!

This is it John. They announced this would be their last year several months ago and there was some miscommunications about the “final show”. But this is definitely the end.

I will miss them, but my biggest fear is that they will be reincarnated as the E-Scooterettes. But it seems the way things are going these days.

Jonathan…reading your homage to the Sprockets…and my eyes are tearing pinky tears…thinking back to all those great events. (And my amazement seeing the Sprockets perform one year – 2006?- while crawling and dancing in some hot Pedal Palooza dirt pile of a site. That was true event dedication I thought….

And thinking back with your piece…their start was at one of the best MCBFs…with Shawn MC’d the MCBF in a dress…more epic with Kiran, Timo too and of course Alan doing wild donuts on his then new [Vanilla?] handbuilt long bike in the middle of everything on the play court of Col Sumners Park.

And this great short Nicky, a sprockette herself, made: https://vimeo.com/1663322