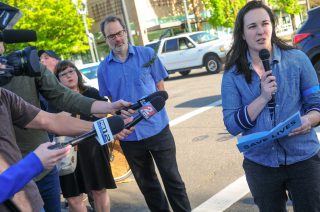 Me, being a person who cares about things (a.k.a. an activist), at a memorial for a crash victim back in April.
(Photo © J. Maus/BikePortland)

Catie Gould is a BikePortland contributor and co-chair of Bike Loud PDX.
___

Activist is a loaded word.

For years, when someone would call me an activist, I just shrugged it off. “I just go to a lot of public meetings,” I’d say. The word seemed too big for me. I was just interested in a few local projects and occasionally asked a hard question. Even after I went from attending rallies to organizing and speaking at them, the word still felt uncomfortable. Advocate, yes. That feels better. I could agree that most of my comments advocate for something. But activists? They are subject-matter experts, lead movements, build coalitions. I just wanted to go to a few meetings to channel my frustrations and hopes into a place where it might matter. Isn’t that what we’re all doing?

My reaction to being labeled didn’t come out of nowhere. The media reinforces the idea that activists are special interest groups more akin to lobbyists than more benevolent neighbors or community members. Who is a neighbor and who is an activist depends on where you stand. Recent local media coverage of a road diet on NE Glisan Road described critics of the project as “neighbors” and “residents”. The only supporting voice came from a staffer of The Street Trust, a professional advocacy organization. An Oregon Public Broadcasting report on an I-5 Rose Quarter project public hearing used the word “opponents” eight times and “neighbor” only once to describe those who testified against the project.

Part of the issue is that transportation activism can be very wonky (wonk, noun: a person who takes an excessive interest in minor details of political policy). There’s a steep learning curve, where technical knowledge of rules and manuals are seemingly required to make a good case to the city. In my own dive into advocacy I spent years reading books, news articles, and planning manuals. I didn’t feel like I’d be qualified to speak up otherwise.

I want you to feel in your bones, whether you’ve attended one or one-hundred public hearings, that you are a valid and important part of this movement.

Recently I’ve heard shifts in language that push back against the idea that activists are passionate experts — particularly in the climate change space. It was on display at the September hearing of the U.S. House Committee on Climate Crisis. Some of the youth panelists described themselves as activists, but Greta Thunberg stated plainly, “I don’t want you to listen to me. I want you to listen to the scientists.” Instead of writing her own testimony, she submitted the October 2018 Intergovernmental Panel on Climate Change (IPCC) Report. It felt revolutionary and obvious that a teenager shouldn’t have to be an expert in specific policy solutions.

This shift in language is happening locally too. At a recent Metro T2020 Task Force meeting, Isabella Esbeck, a junior in high school said, “I should not be spending my Wednesday evening testifying in front of you. I should be studying for my math test, playing sports, and hanging out with my friends.” Her words were relatable to me on an emotional level. Like Isabella, I would rather be doing something else (like watercolor painting) if only I felt our government could handle things on their own.

So what is the role of activists? And should we try to fight the label or embrace it? I propose both.

I want the word to feel like it belongs to all of us. You don’t need a PhD in traffic engineering or a 50-point plan to begin. I want you to feel in your bones, whether you’ve attended one or one-hundred public hearings, that you are a valid and important part of this movement. (I wish I could take back all the times I didn’t raise my voice because I didn’t feel qualified enough to speak up.)

If caring about the future labels you an activist, then maybe we’re all guilty. We need to do this work while fighting back against the idea that activists are a group of people separate from the rest of the public. We are neighbors, community members, residents, concerned citizens, humans, family. Let’s build a tent big enough for everyone.

Related reading: I am not a bus advocate, by Jarrett Walker.

— Catie Gould, @Citizen_Cate on Twitter
— Get our headlines delivered to your inbox.
— Support this independent community media outlet with a one-time contribution or monthly subscription.

Good observation Catie, but it is more than just the word activist. As pointed out in Noam Chomsky’s book, “Manufacturing Consent,” the powers that benefit from the continuation of the status quo have long used specific labels to minimize or even demonize those that oppose them. Hence the use of words such as Activist to minimize the credibility of alternative transportation activists, or Tree Huggers or Ecoradicals to minimize the value of the voices with concerns and activities to stop environmental destruction. So wear your activist label as a badge of honor as it means you are on the right side of history.

I find in my work these days that the labels “activist” and “advocate” are used interchangeably, as is “grass-root lobbyist”, depending on the context and the audience I’m dealing with (City Council vs. city traffic engineers vs. paid nonprofit staff vs. other activists/advocates vs. paid industry lobbyists vs. neighbors vs. the press vs. potential and actual allies.)

Back in the ancient old days (before 2000) when we used to mail out stuff rather than use the internet, the US Postal Service and the IRS would distinguish between those terms and we had to be more careful which term we used and when, but that time has long gone by.

And it’s a thankless task being an advocate/activist, a bit like a poorly paid (or more likely unpaid) politician who gets no credit but all the blame. I often feel I’m afflicted with a terrible disease – I don’t gain any pleasure to bitch about issues, I try to do something about them.

Portland is a better city because if you Catie. Please keep up the good work!

Like many epithets, it seems like ‘activist’ often gets thrown around by people who are trying to deflect attention from their own activism. Like over there at activist ODOT.

Why is ‘activist’ negative at all? Clearly I don’t get it.

We all have opinions and most of us vote. But democracy is not just voting, stating opinions, and periodic jury duty. In order for participatory democracy to be successful and sustainable, it needs people who advocate for improvements, people who work to persuade others to also advocate for change, to change opinions and ultimately their votes or the votes of people in representative democracy (legislatures and councils). And of course we need people to convince bureaucrats to change their decision-making, which isn’t democratic at all, quite the opposite, but nevertheless a necessary evil in our society.

[I’d be tempted to interject the song lyrics for ‘New Dress’ by Depeche Mode, but I digress.]

IMO, an ‘advocate’ can be either paid or unpaid person who advocates for an issue or a set of responses to an issue to the population at large, very similar (the same as?) to a ‘grass-roots lobbyist.’ I have met many professional ‘advocates’ who build coalitions and who are experts in their fields. Coalition-building is a basic tool for successful advocacy. This blog is a case in point.

Further IMO, a ‘lobbyist’ is someone who is paid to advocate or lobby to particular sets of decision-makers, be they legislators, councilors, or boards, either for general issues or for specific projects and/or contracts. They are basically professional advocates employed by others.

Further still IMO, an ‘activist’ is a person who specializes in organizing other people to advocate for specific causes and issues. Every advocate I’ve ever met has at one time or another been an activist, but there are people who specialize in it either as volunteers or as poorly-paid nonprofit employees (part of that nonprofit industrial complex.) An ‘agitator’ is someone who is REALLY good at organizing people and has a recognized track record of successful advocacy.