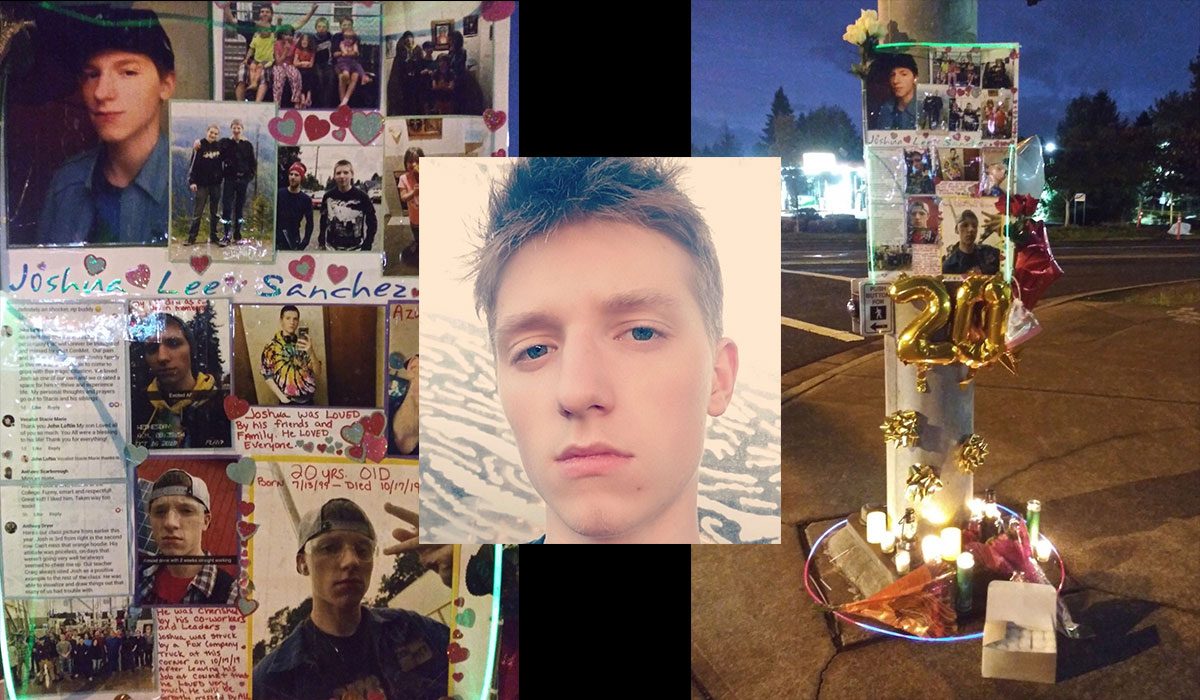 Images of Sanchez and memorial on corner of Hwy 212 and 102nd in Happy Valley. (Via Facebook, used with permission)

“His attitude was priceless. Our teacher always used Josh as a positive example to the rest of the class.”
— Anthony Dryer, classmate

Last Thursday around 7:30 am 20-year-old Milwaukie resident Joshua Lee Sanchez had just gotten off work and was walking to the bus stop on the corner of Highway 212 and 102nd in Happy Valley (about nine miles southeast of downtown Portland). As he waited on the corner, the driver of a three-axle, 58,000 pound commercial landscaping truck made a right turn in front of him. For reasons that aren’t yet clear, Sanchez died as a result of a collision with that truck.

A memorial has sprung up at the corner where friends and family have left photos, candles, and notes. A vigil organized by his mother was held last night.

Sanchez was born in Portland and attended Parkrose High School. He studied machining at Clackamas Community College and was employed as a CNC machinist operator at Consolidated Metco (ConMet), an aluminum parts manufacturer located across the street from where the collision occurred. 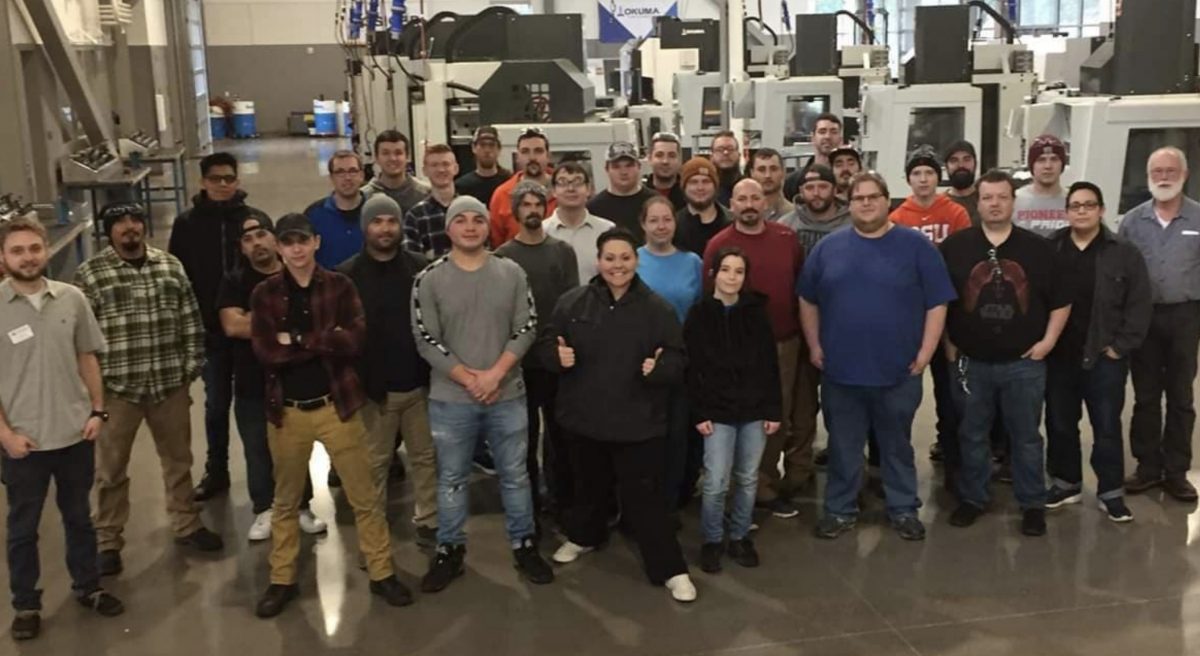 Anthony Dryer remembered having Sanchez in his class. “His attitude was priceless,” he shared with me this morning. “On days that weren’t going very well he always seemed to cheer me up. Our teacher always used Josh as a positive example to the rest of the class. He was able to visualize and draw things out that many of us had trouble with.”

According to his manager at ConMet, Sanchez was the sole provider for six siblings.

This is a tragic loss for many people who knew and loved Sanchez, not to mention that we’ve lost a bright young person who would have made a positive contribution to our region. That’s why I’m so disturbed at how the Clackamas County Sheriff’s Office chose to frame what happened.

The first and only (so far) public statement from the Sheriff’s Office says their initial investigation, “revealed the deceased man on the sidewalk had been acting strange” and that, “For an unknown reason the male entered the roadway and was struck by the rear tires of the CMV [commercial motor vehicle].” The statement also mentions that the truck driver had the green light. Was it green for Sanchez too? 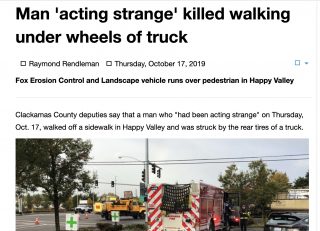 Screengrab of article in Clackamas Review.

Police statements after tragic crashes are very powerful. They are often written by police staff who are not trained in writing and the statements are repeated verbatim by local media outlets — a very bad practice that perpetuates a general cultural bias that sympathizes with car and truck drivers. When the statements include such charged language that paints a clear picture of fault, those media stories amplify a narrative of blame that perpetuates existing biases and leads to unproductive discourse, inaccurate public perceptions, and makes efforts to solve the root cause of these tragedies (an automobile-dominated built environment) much harder. In this case, many people reading about the crash will immediately assume Sanchez was responsible for his own death (I know because I’ve read many comments online that are already doing this). That’s not fair to him, his family, or anyone that travels our streets without the protection of a large metal box around them.

Regardless of who’s at fault, it’s irresponsible, insensitive, and unnecessary to include highly-charged phrases in police statements so soon after a crash like this. 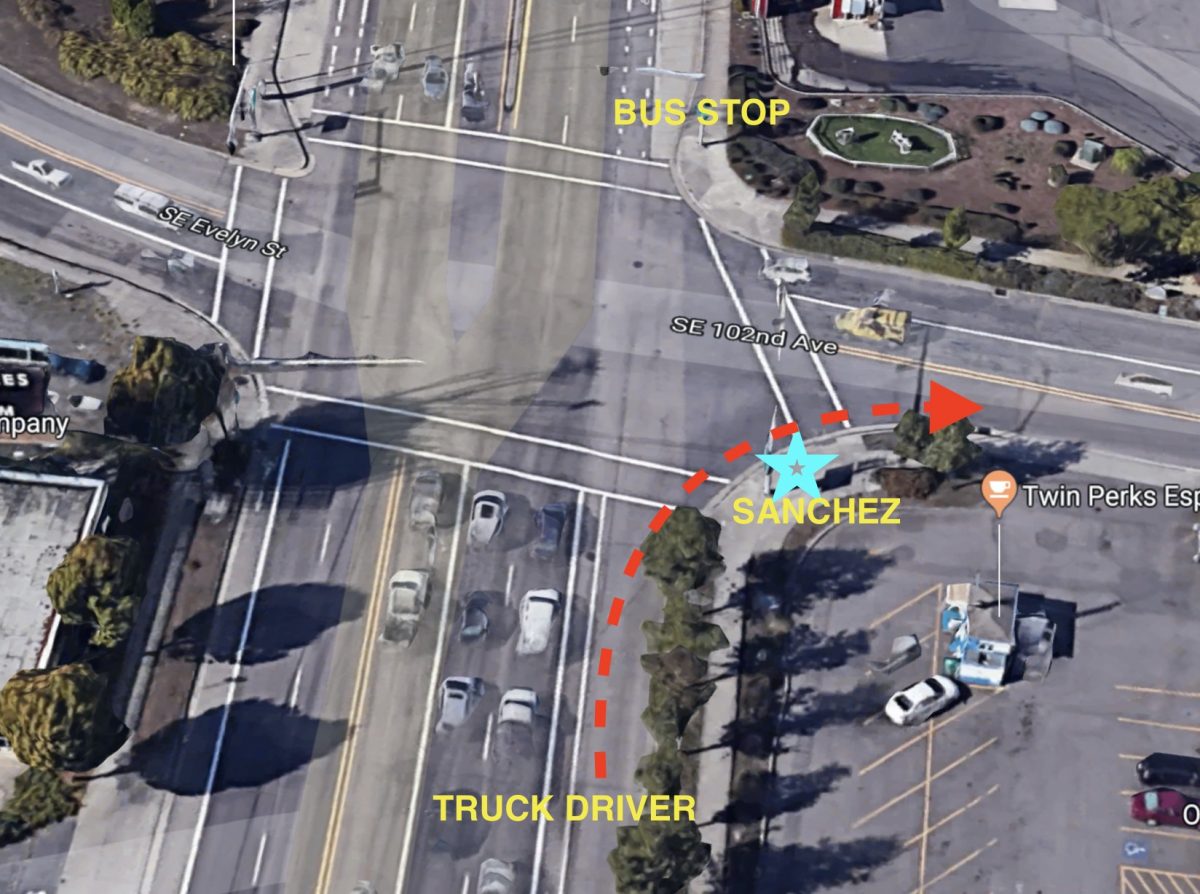 (Images from the scene show that the truck came to a stop several yards beyond the corner. Photos: Clack Co Sheriff’s Office)

I’m still trying to learn more from the Sheriff’s Office about the basis of their statement. In the meantime, I’ve received a statement from one of Sanchez’s managers at ConMet who shared a different perspective on what happened based on conversations from baristas at a drive-through espresso cart located at the same corner.

“According to the baristas who were witnesses, [Sanchez] pressed the button to cross and was waiting on the sidewalk to cross. From their view – the truck’s back end jumped the curb and hit him while he was on the sidewalk. Unfortunately his back was to the truck and he never saw it coming.”

The man says he has encouraged the baristas to give their statements to investigators.

A view of the corner shows it’s dangerous by design. The wide turning radius encourages fast turns and the crosswalk is set back which shortens sight lines. It’s also common for wheels of large trucks to mount curbs when making right turns.

I’m in touch with Sanchez’s mom and am expecting a call from the Happy Valley Police Chief. Stay tuned for updates.

UPDATE: I just received an email from Crystal Smith, a woman who Joshua had lived with for a period of time:

“Thank you for your article… I was so beyond angry when I read the statement that he was “acting strange”. This is not the boy I know. I know for a fact that he would not jeopardize his life. Family meant everything to him. The statement is not fair because Josh is no longer with us to defend himself against this statement. Our family, mostly my children, are having a very difficult time with this. My younger son was the last person to speak to Josh before he passed. There was no mention of any “strange” behavior. I am deeply sorry for his mother and his siblings. “My boy” would NOT have done anything to harm himself and the sheriff’s department should be ashamed of themselves… An innocent boy should not be subjected to ridicule, especially after such a tragedy. His family should not have to face those words, EVER.