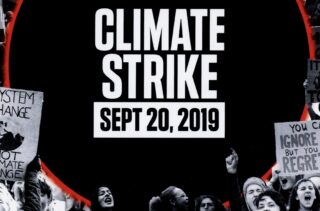 In case you haven’t heard, this Friday (9/20) is the big Climate Strike in Portland and around the world. Inspired by 16-year-old Greta Thunberg and other youth organizers, the event aims to get people to stop talking about climate change and start taking action.

Friday’s event will kickoff with a rally at City Hall followed by a festival on the east side of the river in a lot just south of OMSI. We expect a huge turnout with many cycling activists taking part as there’s (not surprisingly) a ton of overlap between people who fight for transportation reform and those who fight for the environment.


In Oregon, emissions from vehicles represent the largest chunk of greenhouse gases. And both locally and statewide, those emissions are headed in the wrong direction (see below). As our city and state add residents, not enough of them are choosing to walk, bike, or take transit often enough and vehicle miles traveled (VMT) is going up.

Content to kick the can down the road, leaders spend too much time planning and posturing and not enough time implementing and executing. Mayor Ted Wheeler, to name just one, is coming under fire for that gap between rhetoric and action. This morning he tweeted plans to attend the C40 World Mayors Summit in Copenhagen next month. That event aims to, “rally around the radical and ambitious climate action our planet needs.”

But instead of cheering him on, youth climate organizers say he should stay home unless he meets their demands. Here’s what they want:

Establish a Climate Test. Every decision made by the city of Portland and its departments must take into account the health of the planet and choose what will most benefit the earth.

Stop Zenith. Deny any and all permits for this disastrous tar sands oil terminal.

“Unless these demands are met,” their statement reads, “Stay home Mayor Wheeler! Don’t go to Copenhagen for the C40 Mayor Summit in October as a ‘climate champion mayor’ if these truly bold actions aren’t taken.”

What strikes me about their demands is how all four of them have a strong connection to transportation. Does Wheeler’s support of the I-5 freeway expansion take into account the health of the planet? Would we still be building parking garages if we were in a climate emergency? How many more students would take TriMet if they had a free pass?

Speaking of a transportation nexus, Friday also happens to be Park(ing) Day, an event where the City permits people to take over car parking spaces and use them as they see fit. This is a great program and it’s good for the climate. The problem is, we need to do much more of it.

Stay tuned this week for an update on Portland’s climate action plan by contributor Catie Gould.

Thank you for highlighting the strike. See you on Friday.

I’ll keep an eye out for a pink hairbow

I never get to go to these things on account of a lousy work schedule. I appreciate your coverage, Jonathan!

So many things broken in Portland and blowhard Wheeler wants us to pay for him to jet over to Copenhagen? The usual “do as I say not as I do” from this crowd.

The best thing the young can do to fight climate change is … (drum roll) not have children themselves. Every child NOT born onto the planet avoids many tons of carbon emissions just on ferrying the kid back and forth to and from school.

That might be, but I’m pretty sure my child is going to solve this whole climate change problem.

If not yours, it will be someone else’s.

Chris I
Reply to  Brian

I’m going to just keep having kids, to improve the odds that my kid is, in fact, the one who solves this problem.

It’s true that reducing humanity’s overall consumption of resources will be vital for happy living on this finite planet, but the effect of this particular not doing something won’t find us for another generation. We actually need to act quicker, and the immediate something we need to not do anymore is extract and burn fossil fuels.

Or Greta and her super powers.

I think she already flew back to Sweden.