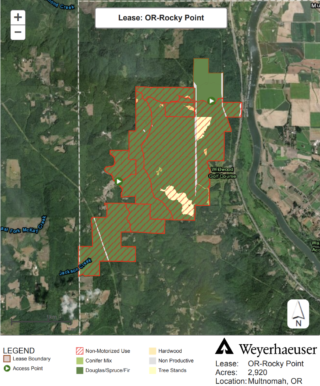 Lease boundary map. Multnomah Channel and Sauvie Island are on the right.
(Click to enlarge)

To put the size of the parcel into perspective, it’s roughly equivalent to a section of Forest Park between the Thurman gate in northwest Portland and the St. Johns Bridge.

This is literally and figuratively a very big deal.

Known as the Rocky Point parcel because it straddles Rocky Point Road, the land offers a trove of opportunities for both gravel and singletrack trail riding. The northern part of the property (about 20% of total land on the lease) is already a well-known spot for mountain biking with access via turnouts on Rocky Point Road; but the trails are informal, undeveloped — and due to forestry operations — access is often closed without warning. 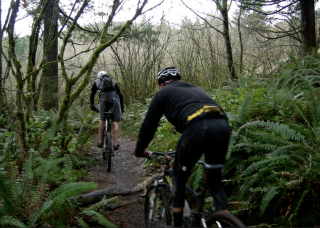 This historic agreement offers great new riding relatively close to Portland — something in very high demand given the lack of access in Forest Park and River View Natural Area. The lease also strengthens the relationship between the largest timberland owner and largest off-road bicycling organization in the region — a major coup for the NW Trail Alliance that illustrates the group’s maturation and growth over the past five years.

As part of the agreement, NWTA will complete an inventory of existing trails and will have the ability to build new ones. They will also assume responsibility for maintenance of the trails and maintain a list of people authorized to use them.

NWTA will supply Weyerhaeuser with a list of members who have access privileges to the property effective August 1st of this year. That means if you want to ride the Rocky Point area you must be an NWTA member (memberships are $39 a year for individuals, $50 for families). Members who want to ride at Rocky Point will need to sign a liability waiver and agree to certain conditions before being granted a “Rocky Point Access Permit”.

To oversee the project, NWTA will assemble a Rocky Point Stewardship Team made up of staff and volunteers. They’ve also agreed to develop a trail management plan that will be coordinated with Weyerhaeuser to avoid conflict with Weyerhaeuser’s forestry operations.

There are other limitations in the agreement such as no biking access during fire risk closures and periodic closures during active forestry operations. NWTA will maintain an up to date web page detailing the most current conditions, and the general limitations of the lease. 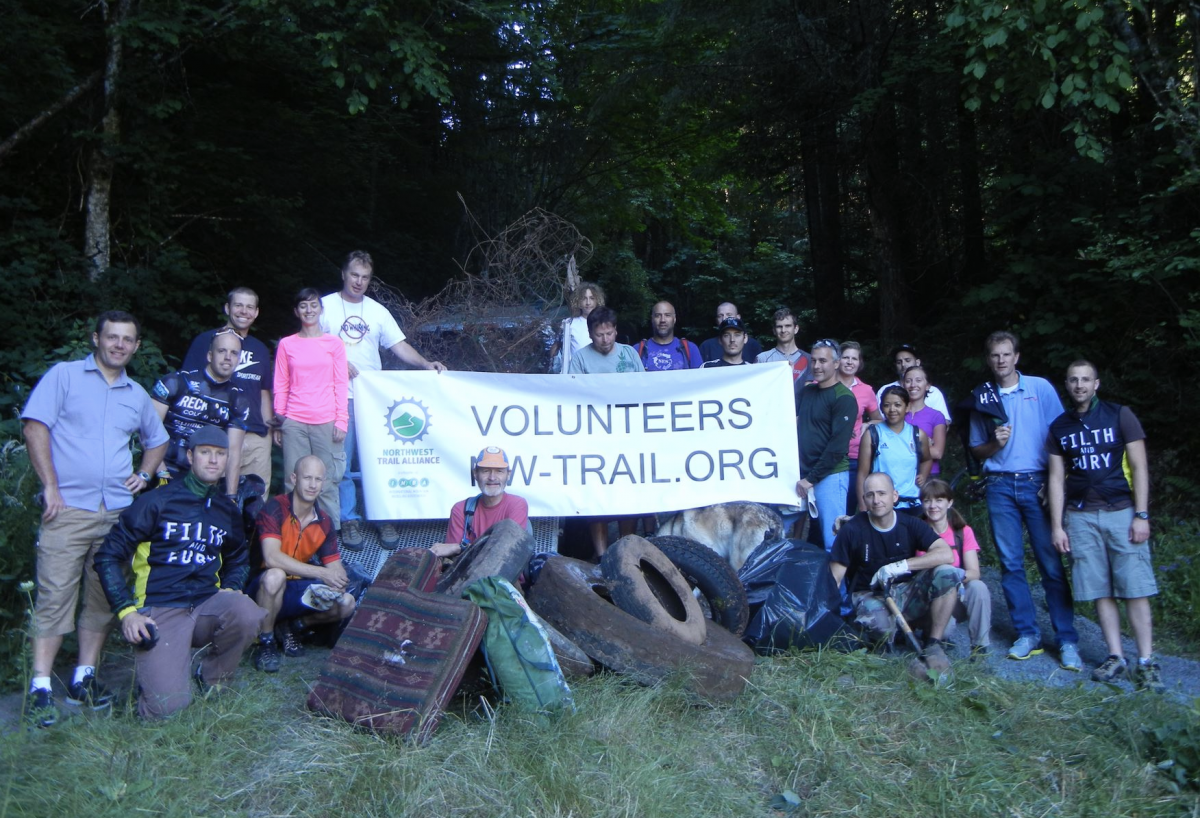 “We’ve been working on this relationship for many years.”
— Andy Jansky, advocacy director NW Trail Alliance

In 2015 we reported that Weyerhaeuser began a permit program for their local parcels. At that time, they offered a lease on a portion of this Rocky Point area to the public. NWTA considered signing on, but ultimately declined due to insurance liability and organizational capacity limitations. Thankfully, an individual advocate stepped up. John “Dabby” Campbell purchased the lease in 2015 and has managed it ever since. Campbell, a NWTA volunteer and veteran Portland bicycling advocate, has willingly stepped down from his lease so that NWTA could enter into a larger scale agreement.

The partnership benefits Weyerhaeuser by bringing a highly motivated group of land stewards onto their property and by strengthening their connection to the community. It’s just the latest example of how the NWTA has earned the trust of a land manager.

In 2016 the NWTA successfully advocated for mountain biking trails in Metro’s North Tualatin Mountains (just south of the Rocky Point parcel) and the group has been instrumental in the success of ridings areas like Stub Stewart State Park, Gateway Green, and the Sandy Ridge Trails where they’ve established productive working relationships with Oregon State Parks, Portland Parks & Recreation, and the Bureau of Land Management respectively.

NWTA Advocacy Director Andy Jansky helped organize a work party at Rocky Point in 2011 to clean up trash and other debris that had been illegally dumped in the forest (photos above). “We’ve been working on this relationship for many years,” he wrote in an email to BikePortland. “And the volunteer effort of our members and past and current boards have helped build a solid foundation with our partners.”

Stay tuned for details from NWTA for exciting stewardship and riding opportunities at Rocky Point.

UPDATE, August 2nd: NWTA has updated their website with more information about Rocky Point access, including a link to the waiver you need to sign in order to ride there.