It’s time to help the Portland Bureau of Transportation make northwest neighborhoods as bike-friendly as possible.

PBOT has just opened an online open house and shared latest project concepts for their Northwest in Motion project. This is an effort to identify and prioritize about a dozen projects that aim to encourage biking, walking, and transit use in and around the Pearl District .

The online open house is presented in the form of an interactive map that features the design concepts for each project. You can click on a street to see the concept, then scroll down to tell PBOT if they’re on the right track (or not) and to share feedback.

We last shared the draft designs at the end of April and there appear to be several compromises made since then.

The NW Johnson neighborhood greenway is slated for updates, and the design at 15th (adjacent the REI store) has changed significantly since we last checked. The initial concept (shown below) was to eliminate eastbound driving space to make a two-way cycling-only lane: 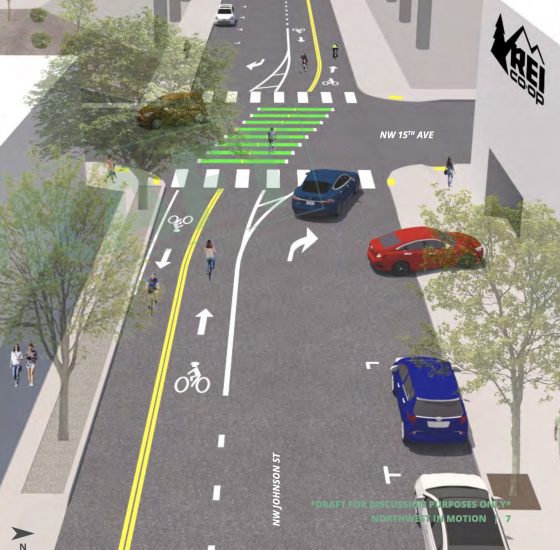 Now the design shows only sharrows in both directions: 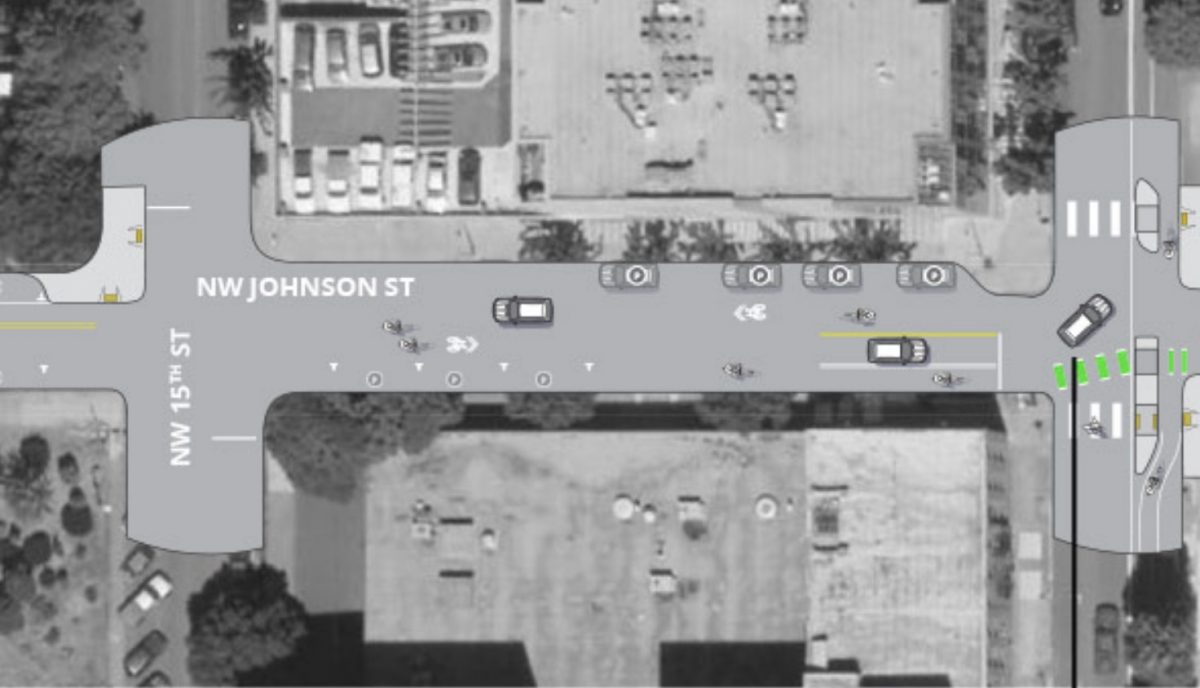 PBOT Project Manager Zef Wagner (via a comment below) said they heard some concerns from the community and business owners about driving access; but, “We changed it because we realized that to address the problem of both freeway traffic and east-west traffic, we didn’t really have to do a diverter on that block. Instead, we could solve the problem through alternating one-way streets (with contraflow bike lanes) between 11th and 12th, 13th and 14th, 15th and 16th, and 17th and 18th. This new design is simpler and easier to implement, with less impact on circulation, and is arguably a stronger approach to diversion than the previous concept.”

Back in April, PBOT showed-off a beautiful diagonal diverter on the NW Pettygrove neighborhood greenway at 20th: 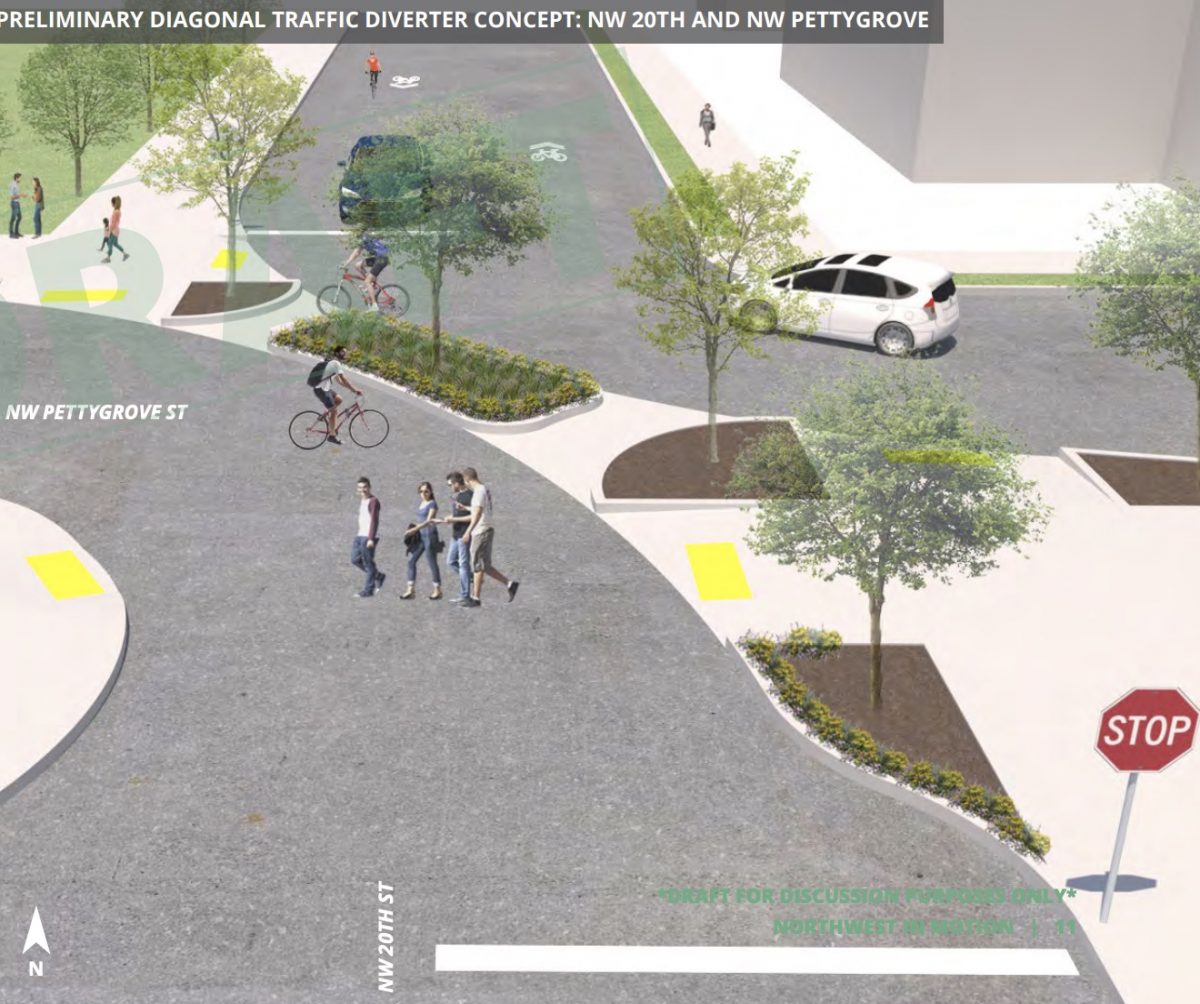 Now that appears to be an enhanced crossing: 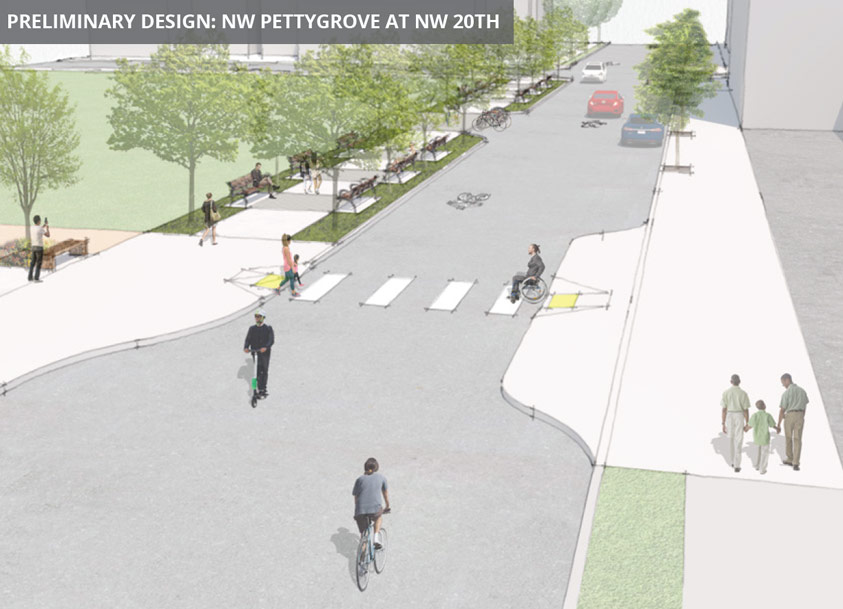 Wagner says the diagonal diverter was removed from the plans at the request of “bike advocates” who felt it wasn’t a good idea to move drivers from one neighborhood greenway to another. “As staff, we agreed with this assessment on further reflection. So instead, we are proposing diverters at 18th and 15th to achieve the same goal in a different way.”

As you can see, these designs are still not finalized. As PBOT cements their Tier 1 project list, it’s imperative they hear from people who want these streets to be as safe as possible for bicycle riders. Here’s that link to the online open house one more time. You have until June 30th to leave comments.

And if you just can’t get enough of northwest neighborhood transportation planning, the Pearl District Neighborhood Association’s Planning and Transportation Committee will host a presentation on the projects from PBOT at their meeting tomorrow (Tuesday, June 4th). It will be held at Pacific Northwest College of Art (511 NW Broadway, Room 237) from 6:00 to 8:00 pm. There’s also an open house tomorrow night for the related Broadway Corridor project (which we covered late last month).

If a Pedalpalooza ride is more your way of learning, join PBOT and friends for the NW In Motion Bike Ride tonight (6/3). It leaves from Lucky Lab NW (1945 NW Quimby) at 6:00 pm.

UPDATE and CORRECTION, 3:50 pm: This post initially said changes on Pettygrove and Johnson were made due to pushback from drivers and business owners. I’ve edited it to reflect comments from PBOT project manager that further explain the context for the changes. I regret any confusion.

1 step forward, 30 steps back… Thanks PBOT. All Hail Motordom. (Sorry, I am frustrated). PBOT now has a permanent director. Where’s the Leah Treat-esque visionary leadership? The point of a leader is to lead/proactive not to be reactive.

It would be helpful if people who submit comments posted some of them here to help folks like me who are less familiar with this area figure out how to comment effectively.

They scaled back designs DESPITE a push for more ambitious traffic control from the NW in Motion committee. Super disappointing that PBOT doesn’t even listen to its own citizen committee, and allows a few people in the neighborhood to derail projects that will benefit so many more.

While I won’t argue that there are loud well-established voices in Northwest that oppose safe street improvements in favor of retaining complete automobility, I don’t agree with Jonathan’s characterization that all of the projects have gotten worse. For instance, PBOT is now proposing diverters for multiple blocks on Johnson from 11th all the way to 18th, which will block automobiles from reaching 16th to access I-405. This is an improvement over the previous iteration of the design, which did nothing to reduce traffic east of 14th.

Great to hear Social Engineer. But to be clear, I never said “all projects have gotten worse”… I simply pointed out two distinct elements of two projects that appear to have gotten less bike/walk friendly.

Instead of focusing on this one isolated block of Johnson (surrounded by diverters on both sides btw), I think the bigger question to ask PBOT is why there aren’t any diverters proposed west of 18th on Pettygrove, Marshall or Johnson streets? Surely it’s not because the volumes are sufficiently low enough to meet citywide greenway standards.

Any idea when the Flanders Street Bridge will be built? (Beginning of construction and estimated date of completion?

Construction is expected to start in early 2020 and the bridge will hopefully open in by fall 2020.

Hi folks, project manager here. Just to clarify, the diagonal diverter at NW 20th & Pettygrove was actually removed at the request of bike advocates who commented that it was not a good idea to divert from one neighborhood greenway to another. As staff, we agreed with this assessment on further reflection. So instead, we are proposing diverters at 18th and 15th to achieve the same goal in a different way.

On NW Johnson Street in front of REI, we did not change it as a result of business or community concern, though we certainly did hear some concerns. We changed it because we realized that to address the problem of both freeway traffic and east-west traffic, we didn’t really have to do a diverter on that block. Instead, we could solve the problem through alternating one-way streets (with contraflow bike lanes) between 11th and 12th, 13th and 14th, 15th and 16th, and 17th and 18th. This new design is simpler and easier to implement, with less impact on circulation, and is arguably a stronger approach to diversion than the previous concept.

All that said, we would love to hear all your comments and feedback to make this proposal better! And please spread the word about this important project.

Thanks Zef. I’ve updated the post to reflect your comments.

Thanks, Zef. I totally didn’t see that from the way that segment pops up on the online open house. Maybe I misinterpreted it, but clicking into it I didn’t get the increase in contraflow/diversion. That’s great news on the Johnson greenway. Thanks.

People who attended a BikeLoudPDX meeting and provided feedback on the original design.

UPDATE and CORRECTION, 3:50 pm: This post initially said changes on Pettygrove and Johnson were made due to pushback from drivers and business owners. I’ve edited it to reflect comments from PBOT project manager that further explain the context for the changes. I regret any confusion.

Sorry I cannot attend these meetings for this round…but how about discussing a regional connection (yes ODoT not PBoT) that would repurpose the eastern/outer most lane of the lower deck of i-405 for a “Town Bound” downhill protected bikeway between NE Cook to NW Hoyt? And PBoT would have local links to connect to it. Perhaps time to put it in the hopper for future consideration?

Good morning,
Went on the NW in Motion ride. As a resident of NW Portland it is nice to see some attention paid to this part of town but the proposals and plans still do not change the fact that the automobile continues to rule and the business owners who want people to drive straight to their shops (it is after all so hard to walk a few blocks) are in control. I did not hear about closing even one street to car traffic or adding protected lanes. A diverter here and an arrow in the street there will not change the fact that cycling in NW Portland is not very safe, which is probably one of the reasons there are so few cyclists in our neighborhood.

No mention of making the intersection of NW Lovejoy and 9th any better. It _is_ a major access point for people entering NW by bike. 9th gets way too busy between Naito and Lovejoy. Removing some parking on the west side of 9th would help give bikes some room with all the traffic backed up for the bridge.
Too bad that Overton is giving way to cars and bikes have to shuffle over to Pettygrove. Not going to be too great turning left/east onto Overton from 11th at rush hour. Taking the lane was the best way to not get run down by drivers rushing to the stop sign at 9th. Then throw in a freight train and the bottleneck just builds evermore…

All this focus on NW Johnson – and it is ONE ENORMOUS pot hole. Really bad. Between 23rd and 19th, it’s just dangerous to ride, especially in the dark. And the tree roots suggest it will always be like this -( please don’t remove the trees). It astonishes me that this is apparently one of the most important bike lanes in the neighborhood.

NW has become progressively less pleasant to ride in the last ten years. It’s car dominated, all the building in Slabtown has added a lot of congestion – and the drivers seem more aggressive than in other neighborhoods. I don’t see any attempt to match the greenways on the East side of the river. A few lame sharrows do not make help when you are trying to ride North-South anywhere between NW 25th and NW 20th.

That drawing of NW Pettygrove and 20th just makes me laugh. Draw it again with every single parking space filled up- and car doors opening right onto those bikers and scooters. That’s the reality of this neighborhood.

Some of the delightful things that actually DO slow up traffic, like the traffic circles along 25th, they are proposing to take out.

For an area that could really benefit from being bike friendly, this is a lame vision.

nothing for NW Front, huh??? per usual we get dicked over again.