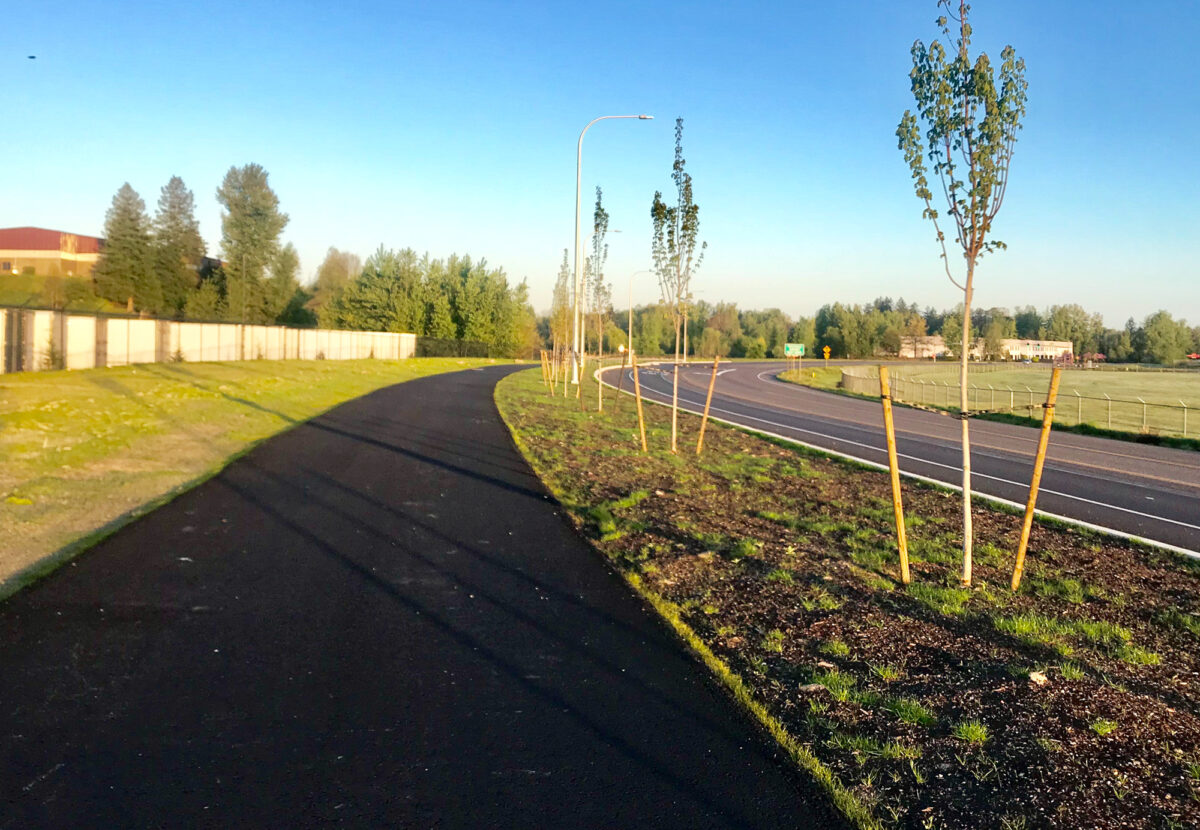 Multnomah County and Metro recently worked together to construct a nice new piece of the 40-Mile Loop on NE Marine Drive in Troutdale. And it’s not the only sign of progress for riding in this area — which happens to be a popular gateway to the Historic Columbia River Highway. 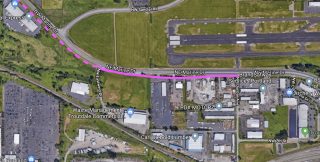 The new path is about a half-mile long. It starts at NW Eastwind Drive and ends at NW Dunbar. The path connects to an existing section of the off-street path that begins in Blue Lake Park about two miles to the west.

I noticed the new path while on a ride last weekend. Before it was put in, this section of Marine Drive bothered me. It’s in a corner where people drive very fast and there are a lot of big trucks around (see before photo below). The bike lane was always strewn with gravel due to a big turnout space adjacent to the road shoulder. Now it’s clean and smooth and separated from drivers via a planted median. 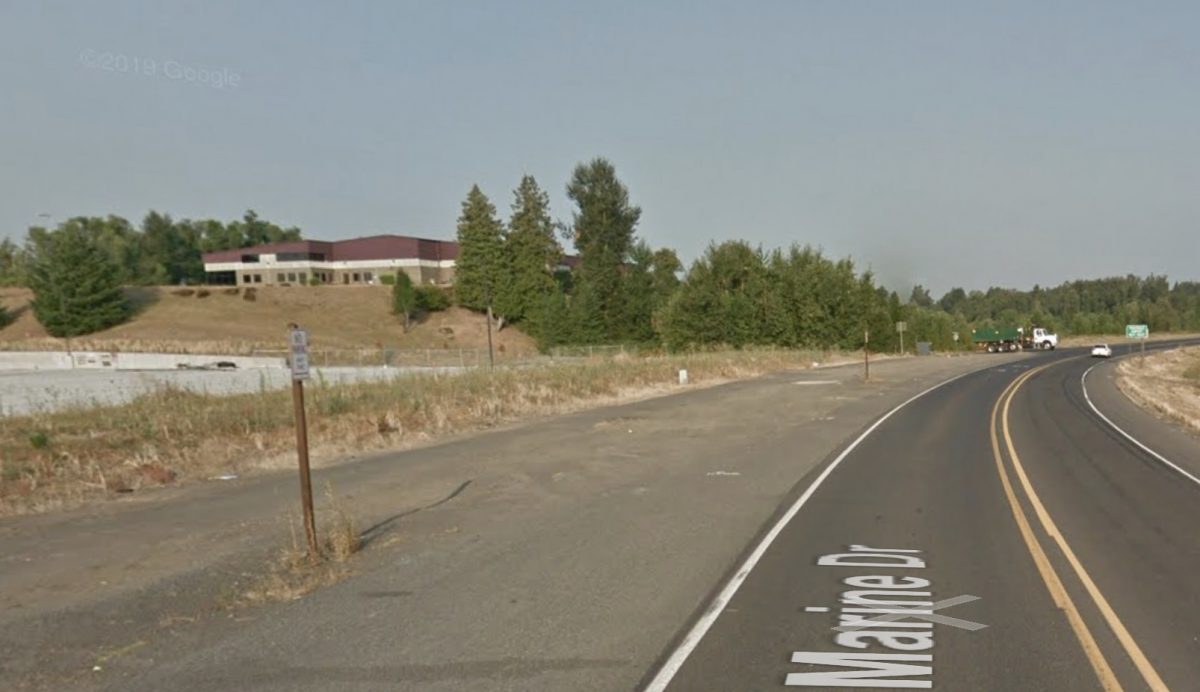 Before the path was put in.

Multnomah County says the project was triggered by a nearby industrial construction project that required the developer to help fund the path. 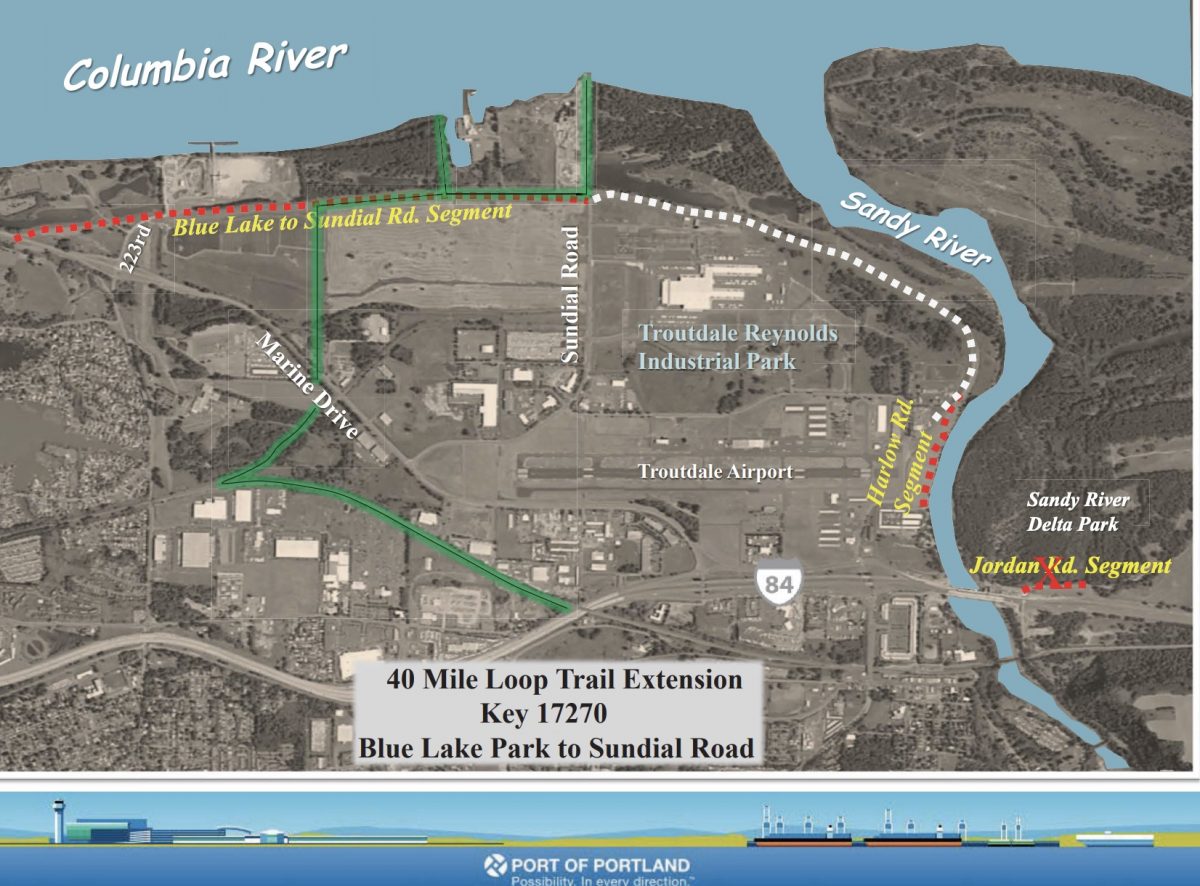 If you ride in this area, we’ve also got an update on another project that will add several miles of new paths that will allow for a much lower-stress connection between Blue Lake Park and the Sandy River/Historic Highway.

Remember in 2015 when I shared a few unpaved connections between Marine Drive and the Sandy River Delta area that connected directly to the new bike path over the Sandy River? A Port of Portland project to formalize these connections (that I first reported on in August 2016) has moved forward and is scheduled for construction next year.

(Harlow Road Segment as it exists today on the left, and the currently unpaved levee between Blue Lake Park and Sundial Road on the right. Photos by J. Maus/BikePortland) 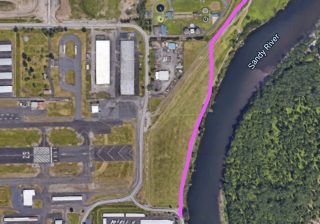 According to a presentation at the recent Metro Quarterly Trails Forum, the Port of Portland is currently in design phase for the “Fairview Gap” project. They plan to construct a 1.7 mile path that will connect to Marine Drive at Blue Lake Park. They will install a flashing beacon west of NE 223rd Avenue and the new path will follow a currently unpaved levee crossing to Sundial Road. A separate segment will pave 1/3 of a mile north-south along the Sandy River to fill a gap between the existing Reynolds Trail and NE Harlow Road.

Construction on these two segments will start next year.

Great news!! I just did BOTG and my Garmin was trying to take me that way and I didn’t believe it.

I ll have to go check it out!
Thanks

Are you thinking it’s not “protected”? Granted, there aren’t steel guardrails, concrete barriers, etc. but the several-foot-wide separation offers much more protection than a standard bike lane would. Is there a standard, official definition that this doesn’t meet?

Haha. Yes. Imo this qualifies as protected. There’s ample space between users, different material, and vertical delineation. Beats the hell out of paint-only buffers any day of the week.

In about a decade, those trees might provide some protection.

Separated is still like 100x better to ride on than painted.

Would you have recommended something different? Raising it? Adding barriers walls, or a ditch? Was this design wrong to do?

Any of the things I identified would better protect the pathway. I’m less concerned about it being separated, since the location is industrial, so accessibility for path users is a lower priority. A swale, maybe 3 feet deep, between the road and path seems like a contextually appropriate feature. It will be near impossible to create a protected bike lane that is also 100% accessible between intersections, since the goals tend to be mutually exclusive.

I agree with all of that.

I agree with paikiala on this one, while it is “protected”, it isn’t by any definition a “bike lane”, it’s entirely the definition of an old-fashioned “side path”, much like the I-205 or I-84 bike or multi-use paths. Very 1970s retro. To be a “protected bike lane”, it needs to be at the same level as the roadway, with an easy entry/exit for micro-mobility users to use the main roadway for faster speeds. I’m rather embarrassed by the headline – really Jonathan, I thought you knew better.

But it’s not progress, it’s in fact the most expensive and least safe type of bicycle infrastructure there is, taking away resources better spent elsewhere or spent on more useful infrastructure at this location, such as a protected bike lane and protected crossings. With off-street pathways like this one, bicyclists are now segregated (separate but equal?) from traffic with no easy entry or exit to the main roadway. Bicyclists tend to become complacent on such paths and less ready to safely cross busy roadways. Even worse, motorists now can more easily ignore most cyclists, “pushing” them to use the side path, and likely causing more crashes, and more fatal/badly injured crashes, when the side path intersects the adjacent roadway. Such facilities have a long history of being among the dangerous to cyclists, which is why I was so dismayed by Jonathan’s positive take on this new facility.

Let’s agree to disagree. I think most people just like to ride on sidepaths much more than they like to ride next to cars, especially riders who are newer or less competent.

We had a few of these encircling Corvallis when I was growing up, and I rode all over the place on them at a very young age.

“Not progress” would mean the new configuration is no better than what was there before. I don’t think many people would agree with that.

I do agree your points could be valid is some situations, but at this location, it looks to me like this design was an appropriate choice.

Hopefully this section won’t fall into disrepair like the path to the west that continues adjacent marine drive. Last time I tried to ride the path tree roots had torn up the surface. I much prefer riding marine drive itself.