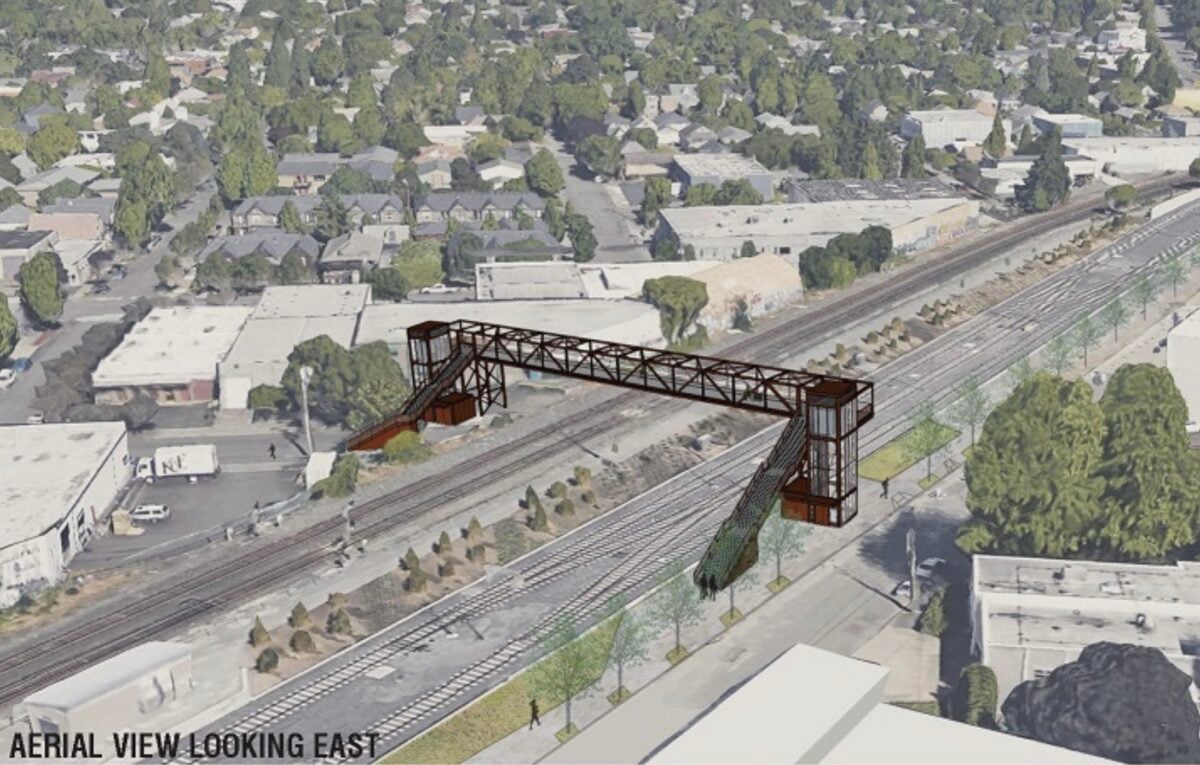 
“TriMet and the City of Portland have elected to move forward with a design that places the structure entirely in existing public right-of-way.”
— TriMet

The bridge will create a new, carfree connection between the SE Clinton/12th Avenue MAX light rail station along Gideon Street and SE 14th Avenue. Initially proposed as part of the Orange MAX Line project, it was delayed due to budget cuts.

The project was announced in June 2017 as a way to give bicycle riders, walkers, and people with personal mobility devices a car and train-free alternative to crossing at the stressful, at-grade SE 12th/Milwaukie/Clinton intersections. The project also ran into unexpectedly strong opposition from business owners on the north side of the proposed bridge.

Michael Koerner owns Koerner Camera Systems which has a parking lot and truck delivery bays just yards from where the overcrossing will land. As we reported in December, Koerner organized other industrial business owners along 14th and SE Taggart Street and retained a lawyer to formally oppose the project. Koerner and his supporters said the increase in traffic volume the overcrossing will create a safety risk and that changes to truck access would hurt bottom lines. Koerner in particular was concerned that the project as initially proposed would encroach on a small portion of his existing parking lot. 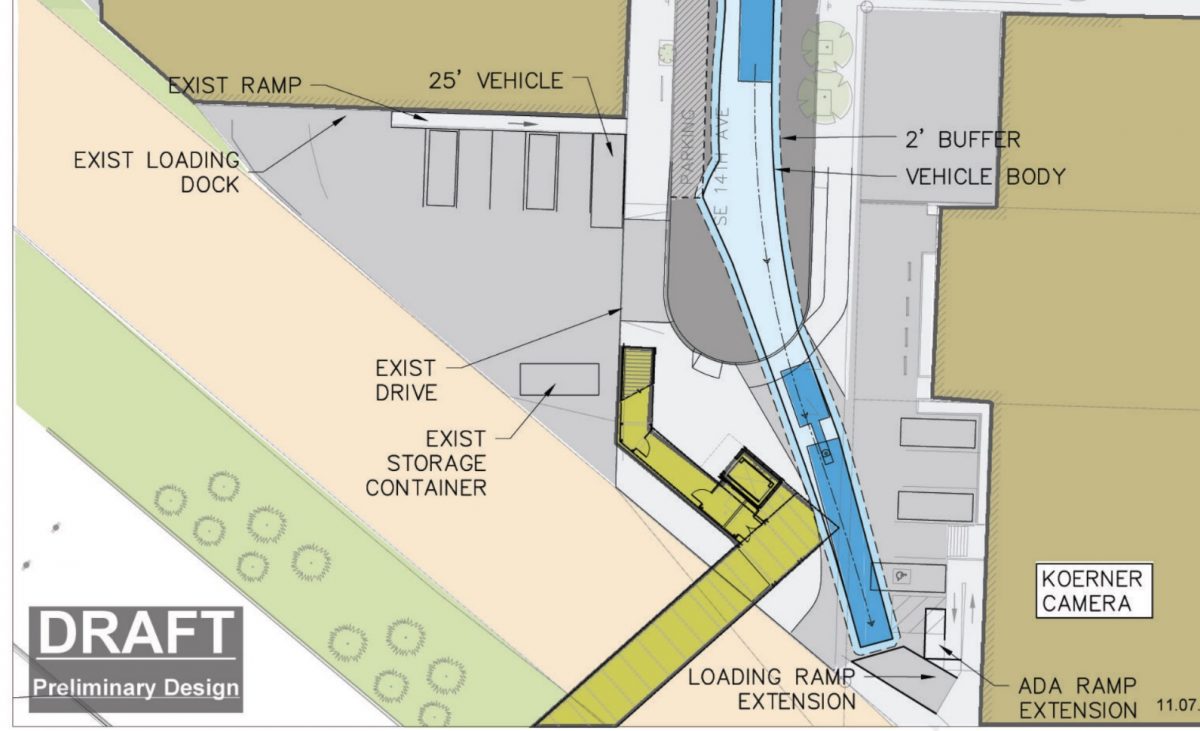 Image filed with FTA by Michael Koerner’s lawyer showing how the initial design of the bridge (green) would encroach on his parking lot.

Koerner’s lawyer penned a letter to the Federal Transit Administration requesting further study and asking for the overcrossing be moved to a different location. TriMet and the Portland Bureau of Transportation (who will own and operate the bridge once it’s built) disagreed.

In their statement released this morning, TriMet says they met with FTA officials last week and plan to construct the project this spring. TriMet also addressed concerns raised by nearby business owners.

The agency did a traffic count and found that about 325 motorized vehicles use SE 14th Avenue each day and that only about 2 percent of them are trucks with trailers. TriMet also revealed they met with “representatives from the business community” and explored design changes that would have no impact on private property. “The FTA, TriMet and the City of Portland have elected to move forward with a design that places the structure entirely in existing public right-of-way,” reads the statement.

We’ve asked Koerner for his response and will update this post when/if we hear back.

TriMet expects to begin construction this spring and finish the new overcrossing in spring 2020. For more information, see the official project page.

Exciting! Thanks for the update , JM! Do you know if there’s a proper bike ramp lip in this stair design? The Darlene hooley one doesn’t work because the handlebars of the bike always hit the staircase railing / handling. You have to tilt your bike at an aggressive angle to get it to work. But then you hit a flat portion of the staircase and because your bike is aggressively titled sideways, it’s awkward (especially with other people around). It sounds like a minor issue but if we are building a new structure we might as well do it properly. It adds no additional cost…

In a perfect world, there would be a bike / scooter / wheelchair ramp as well as stairs. After years of commuting down Lincoln into downtown, I now commute to Hollywood, and my most direct route goes through the Hollywood transit center. I tow a trailer most days, and there is no way to get a bike+trailer down the hairpin ramps on the north side of the MAX tracks…it’s actually kind of insulting.

Looks like we will have the same issue here – there is no way to get a bike trailer over this infrastructure, and other long/heavy bikes like cargo bikes and bikefiets are also shut out unless the wheel gutter is implemented much more effectively than the one at Hollywood Transit Center.

Wheelchair ramps are required to be built in a way so that if a wheelchair loses control and rolls down, they would be stopped before going all the way down. If you had a continuous ramp, that wheelchair could gain speed and crash at the bottom. I’m sure there could be a design that would pass ADA laws and be bike friendly, but often those tight corners are there to stop a runaway wheelchair.

I don’t know about ramp standards, but the ramp on the other side of the tracks is a straight shot, very bike-friendly. See streetview here: https://bit.ly/2XGBZkI. I assumed the hairpins were just because there was no room for a straight ramp there.

The definition of perfect for ADA ramp access is a slope of 1:12 or less. A 20 foot rise in elevation requires a 240 foot long ramp, not counting landings for switch backs/ change of direction.

I’m on the HAND board, where we had multiple discussions about this bridge.

I pushed for ramps, but on the north side, there’s clearly insufficient room. On the south
side, TriMet said there is also not room even though there’s quite a bit of space between the
bridge and the MAX station.

Regarding elevators – they are supposed to be sufficiently large for a bicycle plus a trailer. And
they have front and back doors so that cyclists can go straight in and straight out.

Regarding security cameras – there will be none because PBOT doesn’t want them. Lafayette
has a bunch because TriMet runs that bridge and it is setup to monitor cameras.

Regarding “trays” along the stairs for pushing bicycles up and down — we discussed with TriMet
the problems with typical designs. TriMet promised to look at alternatives.

Overall, TriMet and PBOT did not agree to any of the HAND requests.

Hi Mark, thanks very much for bringing some actual facts to the comments party! I am happy to hear the elevators will accommodate a bike with trailer; a ramp is preferable, but an elevator with front and rear doors as you described will definitely work just fine. I understand that there are no easy solutions to putting a ramp in on this site given the space constraints, so this goes down as a win in my book.

Thanks! I won’t hold my breath but this would be ideal (have it go down the middle of the staircase). Open to either ideas too but please ask them to show where their design has been done before **and** that it works for bike users (not just that someone else did it).

Guaranteed the wheel trays will be useless due to the railing interference.

Future headlines to include:

Gideon Overcrossing elevators plagued by maintenance issues.
(why didn’t we build a ramp?)

It smells like pee and I don’t feel safe.

Elevators are the first thing to go when even a tremblor happens. And we all know what’s ovedrdue.

We are still within a standard deviation, I believe.

How does the urine get there?

Because it’s an unmonitored shelter, those with no where else to go, take refuge in them. And those stumbling home from the bar who do have some place to go do also.

Just curious here: Does anyone know why a bridge like this costs $15 million? About $10 – $20 million is pretty typical for a highway overpass (for cars and trucks). Those bridges are twice as long, five times as wide, and are designed for loads ten times higher. Furthermore, it looks like this bridge will be entirely prefabricated and just dropped into place with a crane.

For comparison, the Flanders bridge over I-405 has a budget of $6 million. Even that seems high, but it’s understandable given the tight urban geometry and overlapping jurisdictions involved.

Does Trimet or Metro ever publish line by line breakdowns of costs? Is that something a reporter could get access to? I’m a big fan of transit, bike lanes, pedestrian bridges, etc., but it seems like any time these agencies touch a project, the budget balloons to four times what it should be.

Overpasses don’t have stairs or elevators

Whats the budget like for keeping the elevators open in future is what I wonder.

Yay, the worst designed bike/walking bridge is being put in the worst location for the most amount of money. Yippy. Seriously.

Where should it be put ?

And we consider this a “win”.

I have mixed feelings about the elevators. Based on the Lafayette Street Overpass, when they work, they are great. When they are out of commission, it is a long detour with a bike or a stroller. Ramps are never out of commission.

To the person commenting about pee in the elevators, there are about sixteen CCTV cameras at the Lafayette Bridge (I might be exaggerating, but not by much) and they are always SPOTLESS.

The doors to the elevators always stay open when they are not in use, which cuts down on people trying to sleep in them etc.

I wish they would put in a ramp. I loved going up and down the bridge in Missoula, MT (map link below). It has a bigger footprint, but with no stairs or elevators. The path was covered and kept it clear in most weather conditions. A bike with a trailer could easily get around the corners.

This bridge wont have a single camera on it. Plus I find that places with surveillance routinely smell of pee. But admittedly I don’t use the Lafayette one, so I haven’t gotten a chance to see that miracle in action.

rick
Where should it be put ?Recommended 2

This has been extensively discussed. It’s a done deal. Trimet, if it does anything well, is that when it gets an idea, no matter how bad, will always follow through. The worse…more so.

How about the new reroute of bus 24?