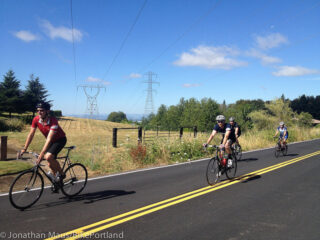 Last week we reported on a project that will close NW Cornelius Pass Road between Highway 30 and NW Germantown Road to through traffic for 13 weeks starting July 8th. Cornelius Pass is a major highway that connects Washington County (near Highway 26) with Scappoose and other destinations along Highway 30.

This is a big deal for bicycle riders because the project will detour thousands of people driving cars and trucks onto what are usually quiet, rural roads that happen to be on very popular cycling routes.

Concerned about safety impacts, we asked Multnomah County if they’d considered bicycle riders in their detour and outreach plans. So far the traffic plans shown on the County’s website and other materials makes no specific mention of cycling routes or cycling-related safety issues. Thankfully it now appears the County will integrate cycling-specific safety messages into their plans.

The average daily traffic volume (ADT) of the section of Cornelius Pass that will be detoured is around 13,000 driving trips. According to the County, about 13 percent of those — around 1,500 vehicles — are big-rig trucks and buses that will take an all-highway detour that won’t have a big impact on cycling. However, that still leaves about 11,500 additional car and (non-commercial) truck trips that will be using roads like NW Newberry, NW Skyline, NW Old Cornelius Pass, NW Phillips and others during the closure.

Yesterday I heard back from County spokesperson Mike Pullen about what they plan to do to address cycling conditions and make drivers aware of the presence of bicycle riders on the roads. Here’s the plan:

Signs: We will install signs on popular cycling roads near Cornelius Pass Road to alert drivers that cyclists are likely to be on the road. These roads will include Skyline, Newberry, Old Cornelius Pass Road, and probably Germantown and McNamee.

Outreach/Communication: We will be sending a mailer to a large zone in the three impacted counties, issuing news releases, project updates, social media posts and maintaining the project webpage. A key message for the public will be for all road users to share the road and be alert for increased traffic on sideroads and the presence of bicyclists. A message for recreational cyclists will be to alert them to the increased traffic we expect on specific sideroads so they can avoid the area if they choose.

No Trucks: A big part of our safety plan is to restrict large trucks and buses from narrow sideroads where they are not permitted. We will be installing more signs to on sideroads where through trucks are banned (such as Newberry and Logie Trail Roads) and working with the Sheriff’s Office to enforce the restriction and cite truck drivers who violate the bans.

Some members of the County’s Bicycle & Pedestrian Advisory Committee thought speed bumps on NW Newberry (the main detour route and favorite climb of many riders) would be a good idea. Pullen said they reviewed that idea; but because driving speeds are expected to already be slow due to the increase in traffic volume. “Installing speed humps on a steep, curving rural road is not warranted, according to our engineer,” Pullen said. He also shared that a temporary traffic signal will be installed on Highway 30 at NW Newberry.

Another idea floated by people concerned about cycling safety was to create special pullouts in shoulders. “In practice, it’s hard to do this,” Pullen shared in an email yesterday. “Bicyclists will tend to find a wide spot in the road or a driveway if they need to get out of traffic in an area where roads are narrow.”

So as of now, beyond the signal at Newberry and Highway 30, there’s no hard infrastructure planned to help mitigate safety concerns related to this project detour. The focus from the County is signs, outreach and enforcement.

Once the detour starts in July we’ll monitor the situation closely. I ride these roads a lot myself, but please get in touch if you have feedback or experiences to share.

Who are these crazy people riding up in the hills, anyway? Let them fend for themselves.

Wow. Really? Some of us live up here. We’re going for a ride out of our front doors. Many of the others simply enjoy riding on a road where they don’t have to deal with a traffic light every 5 feet. Just because it’s somewhere you choose not to ride doesn’t mean that the safety of those of us who do shouldn’t matter.

We’ve never met so I don’t know if this is a legit comment or not. Sure sounds like you’re just trying to make others angry. Please don’t do that. Thanks.

Enforcement, but only for buses and big rigs? We need enforcement for all drivers. Especially on Skyline. How about adding some speed bumps on Skyline?
This talk of bike pullouts concerns me too. It only follows with the narrative that bikes shouldn’t be on the road and should stop every time a car is near them for the driver’s convenience. Which is absolutely absurd. What is needed is extra space so we can ride alongside and everyone can keep moving in a safe & happy way.

A public transit bus from Columbia County to the PCC Rock Creek campus plans to use a road to Skyline to the west of Cornelius Pass.

As in some other road closures, I think many people will take less car trips with this upcoming closure when it takes place.

Perhaps the county could post signs reminding drivers to give at least 3 feet of clearance to bicyclists.

And signs that say “bikes may use full lane” instead of “share the road”.
Also let’s get some signs to remind drivers that “punishment passes” are assault with a deadly weapon.

I hope they’re not going to use any “share the road” signs.

Those signs are already there and have been for a while. Of course you knew that being the frequent cyclist on these roads.

I also ride these roads and I am not looking forward to this road closure. Skyline is already dangerous. I do think it would be a good idea to remind cyclists that they can use the forest roads that go through Forest Park. These routes are not perfect, and won’t work for everyone, but they are a car free alternative that some people can use.

I think Leif Erikson has too many chunks of curbed, busted asphalt. It doesn’t make for a smooth ride on a regular bike.

Saltzman is really the only reasonable alternative through Forest park. And you still better be ready to get dirty… and get dropped out onto Skyline… and ride out some of the worst sections of Hwy 30 to get to it. Honestly I know more people that ride down then back up Saltzman rather than through it on their way somewhere.

I agree that the forest roads are not great, but they could be preferable to riding on Newburyport, McNamee, etc with thousands of cars. Any route you take requires you to go out Rt 30, and also to ride on Skyline (unless you take Germantown Rd through the intersection with Skyline)

For the most part, Multnomah County records have shown very few people operating any vehicles on McNamee. It is a slow descent compared to other roads in the West Hills.

Let’s translate the counties method. We don’t give a shift about bikes. But we will pollutes the planet more with pointless mailers.

Vote Up0Vote Down  Reply
« Weekend Event Guide: Bikepacking clinics, Filmed by Bike launch, and more
How activists and students collaborate with PBOT to get real projects on the ground »