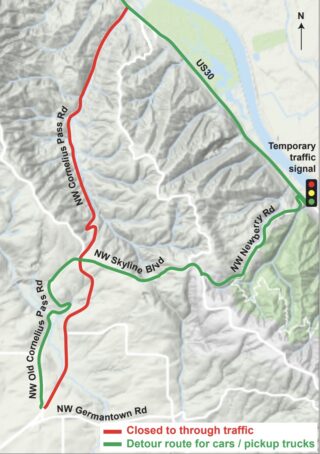 If you were bummed that NW Newberry Road is closed for repairs until April, you won’t be happy about the news I’m about to share.

A major reason Multnomah County needs to fix the landslide that’s made Newberry carfree since January 2017 is because they need to use it as the primary detour for a separate project on nearby Cornelius Pass Road. Starting July 8th, a major project on Cornelius Pass will require it to be closed for thirteen weeks between Highway 30 and Germantown Road.

The recommended detour for the estimated 10,000 daily car and truck drivers will be Newberry to Skyline to Old Cornelius Pass Road — all three of which are very popular cycling routes because of how quiet and low-stress they are.

The impact of all these additional drivers will be very significant. (Keep in mind that large big-rig trucks will be detoured to highways.) And keep in mind that not everyone will opt for Newberry. There’s very likely to be much more traffic on other popular cycling routes like NW McNamee, Logie Trail, and Rocky Point Road as well. Suffice it to say there’s already serious concerns from bike riders and drivers about the impact of this closure.

Because of the impact to cycling routes, I’ve been in touch with the County to make sure they do everything they can to minimize negative impacts and safety hazards to bicycle users. Narrow, winding, rural mountain roads are difficult enough for some road users to share. Adding 10,000 more daily drivers — already frustrated by the detour — could be a recipe for disaster.

To mitigate impacts, members of the County’s Bicycle and Pedestrian Advisory Committee have floated the idea of speed bumps on NW Newberry during the detour. “Generally, if speed bumps are spaced out enough, the Committee felt that bicyclists would be fine with occasional speed bumps,” read minutes from the November 2018 meeting. Speed bumps on west hills roads aren’t unheard of. There are several on NW Germantown.

Also discussed at recent BPAC meetings was the possibility of the County creating/improving vehicle pullouts on NW Newberry specifically so bicycle users could use them. Some members also suggested that the County leverage relationships with large employers like Intel to educate their staff about detour safety issues and encourage them to carpool or use a shuttle during the closure.

The County says they’re still working on a detailed traffic plan for all modes. “We know we need to get out the word to drivers and cyclists to share the road this summer,” County spokesman Mike Pullen shared in an email this week.

(As an aside, the Cornelius Pass Road project won’t include major improvements to the intersection with Skyline, even though a safety audit found that it accounted for far more collisions than any other location along the corridor. There was a recommendation for a roundabout at Skyline but it won’t be a part of this current project.)

See the County’s website for information about the traffic plan and stay tuned for any updates related to cycling safety concerns.

Oh no =( Thanks for the heads up and for helping to minimize the impact to cyclists. As mentioned, I imagine NW McNamee and Logie will also see a large uptick in car traffic trying to get around quickly due to the proximity of Cornelius to those roads (despite their more winding paths).

Drop the max speed to 20 and include heavy enforcement would be better than just letting everyone loose and hoping nothing bad happens.

Last year, a Multnomah County Sheriff officer told me that only one officer is assigned to patrol the entire westside. I’ve heard it is a budget (priorities issue going back decades). I very rarely see them around the Green Hills neighborhood (around Sylvan); I think I saw them just once last year.

If an officer stood on the corner at Sylvan where it meets Hwy 26, they would have their hands full writing tickets all day.

Yes, but the county-owned section of SW Scholls Ferry Road only goes from the traffic light at SW Raab Road to about SW Thomas Street. I don’t think the sheriff is allowed to patrol the overpass.

What exactly is this budget issue anyways? Seems like it’s time to stop accepting this kind of “that’s just the way it is” approach

This is awful news. Tabor repeats here we come, I guess.

The increased amount of foot traffic on Tabor, and the car traffic that brings the feet to the volcano, has made it kind of suck for cycling. I’ve had too many near misses with longboarders who think that the whole road belongs to them and the odd tour bus that’s allowed to the summit area for some bizarre reason. It’s ok in the early morning, but otherwise I’m inclined to give it a miss or just pass through on my way to horking my way up Mt. Scott or some butte or another. Recreational cycling inside of the Portland metro area is a lot less fun than it used to be.

Prediction: If speed bumps are added to high-speed downhill cycling routes, some cyclists will ignore the signs and get hurt when they hit them at high speed and crash.

sarah
Prediction: If speed bumps are added to high-speed downhill cycling routes, some cyclists will ignore the signs and get hurt when they hit them at high speed and crash.

Speed bumps on Newberry are bad idea for cyclists even if they are well marked. Furthermore, unless they pose serious impediments to motor vehicle, I doubt speed bumps will slow down drivers much at all (if Germantown is any indication).

I’m sure they won’t be speed bumps, but speed tables, which are generally less difficult for cyclists. Speedbumps are commonly used on private property (including Riverview Cemetery), but as far as I know cannot legally be installed on public roads.

Also, individual speed tables aren’t generally effective in reducing speeds – people just speed up again right afterward – but they are effective at this when they’re set up in pairs or threes. I’m sure that’s what will be done here, because it’s now the standard treatment.

Another possibility is that savvy cyclists with lots of downhill experience will observe the signs and thus be poised to bunny-hop the speed bumps (much as they do with cattle guards, potholes, etc.).

I jump all the speedbumps I possibly can. It’s fun.

Germantown has speedbumps. I know plenty of cyclists who have crashed on that road, but I’m not aware of any caused by speedbumps.

As long as they get the transitions right, they are just fine. It’s all about being able to catch the backside and not over or under jumping them.

I can easily imagine the additional traffic patterns rippling out even further to Phillips, Helvetia, Kaiser and West Union roads. Guess I’ll stick to Moreland/Rocky Pt./Dixie for west hills riding this summer.

I also really wish the segment 5 connection of the Westside Trail and widened shoulders on upper NW Springville had been completed before this mega project. Then there would have been a nearly traffic-less westside connection to Portland established.

Once the work on Cornelius Pass road is completed, what is the likelihood that one third of the cars will decide to keep using Skyline now that they’ve discovered a nice little cut-through?

Let’s all close our eyes and pray for another convenient little landslide!

The increased traffic in the area has pretty much made Skyline (east of CPR) a no-go for me on weekends. Still a nice ride between Rocky Pointe and CPR though.

This is going to be a disaster, I would avoid this area during this time. The reason the Cornelius Pass intersection with Skyline accounted for far more collisions than any other location along the corridor is that Police use the closest major intersection to the accident, not because that is where most of the accidents occur.

Can you please clarify that?

He is saying the crash gets coded to the nearest intersection

If trucks includes semi’s, then I am skeptical that Newberry is even a remotely viable detour option for them. Newberry has at least one hairpin turn, as well as some other tight turns that I doubt a semi could navigate. Additionally, the sections of 10-15% gradient on Newberry are going to pose one heck of a challenge for semi’s, or even smaller trucks, whether they are going up or down.

I now see on the County’s website (via the link in the article) that large trucks will be detoured around via I-405 and 26.

Even with large trucks being excluded, Newberry is a poor detour solution for motor vehicles.