From Portland to the summit of Mt. Hood and back, by bike (and boot and ski) 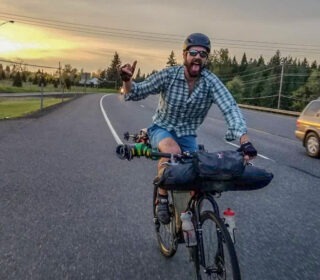 Have you ever been on a bike ride in Portland on a clear day, then looked east to see the magnificent snowy peak of Mt. Hood? Now imagine riding to the mountain, hiking to the summit, skiing back down, then riding home — all under 24 hours.

That was the audacious plan hatched by friends Andy Edick and JT Lehman on a spring day in May of last year. Now in their 30s, the pair ran cross-country together at University of Portland and they’re no strangers to cycling, skiing and mountaineering. Those skills would all come in handy on their 24-hour Mt. Hood-by-bike-and-ski adventure.

“We’d always kind of joked about doing it,” Edick shared on the phone with me this morning. “And when the window opened up, we finally decided if we’re ever going to do it, this is it.”

The “it” is a biking, hiking, and skiing adventure that would take them from the Willamette River to the summit of Mt. Hood — and back — before the earth made one rotation. 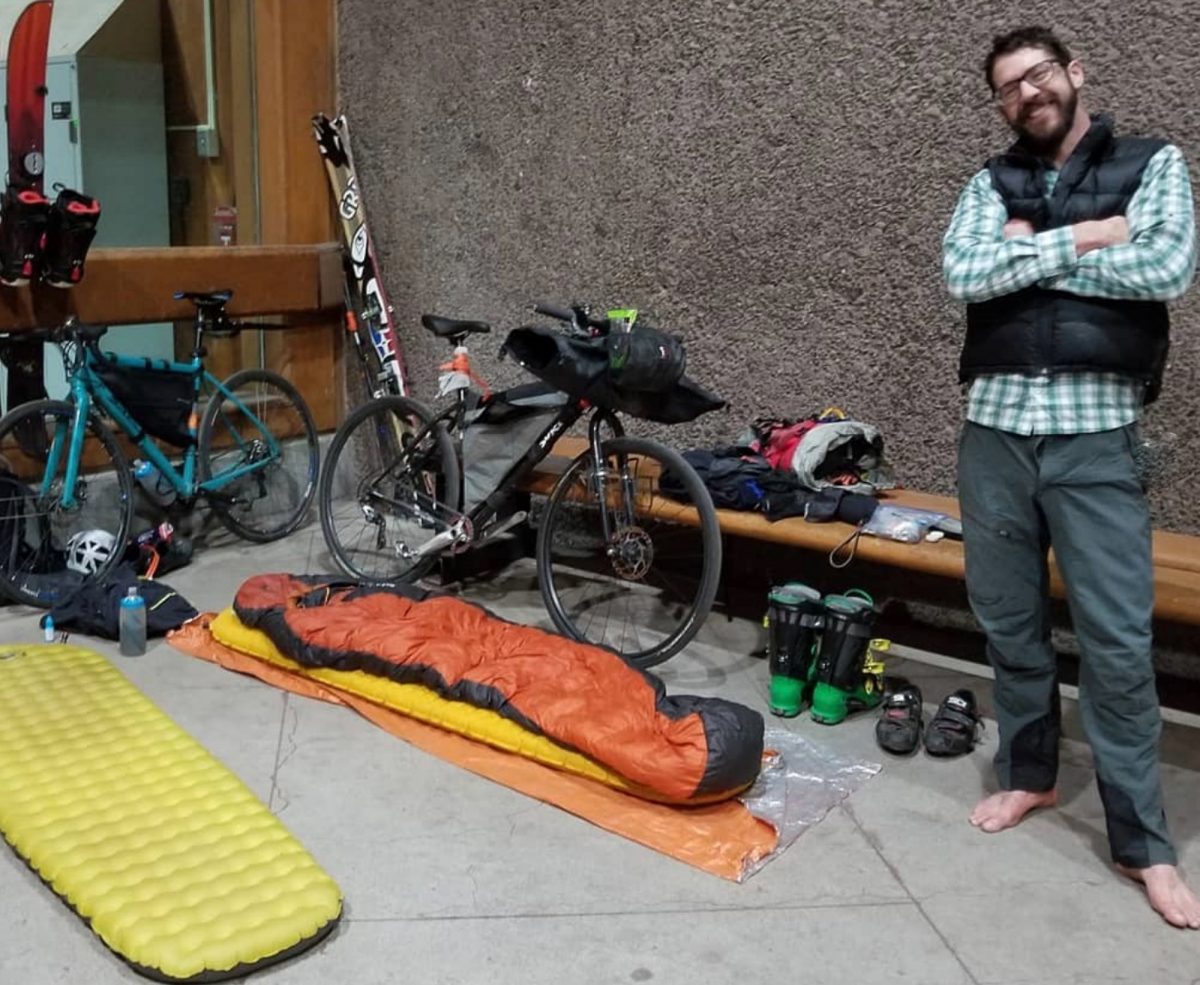 Getting the gear sorted. 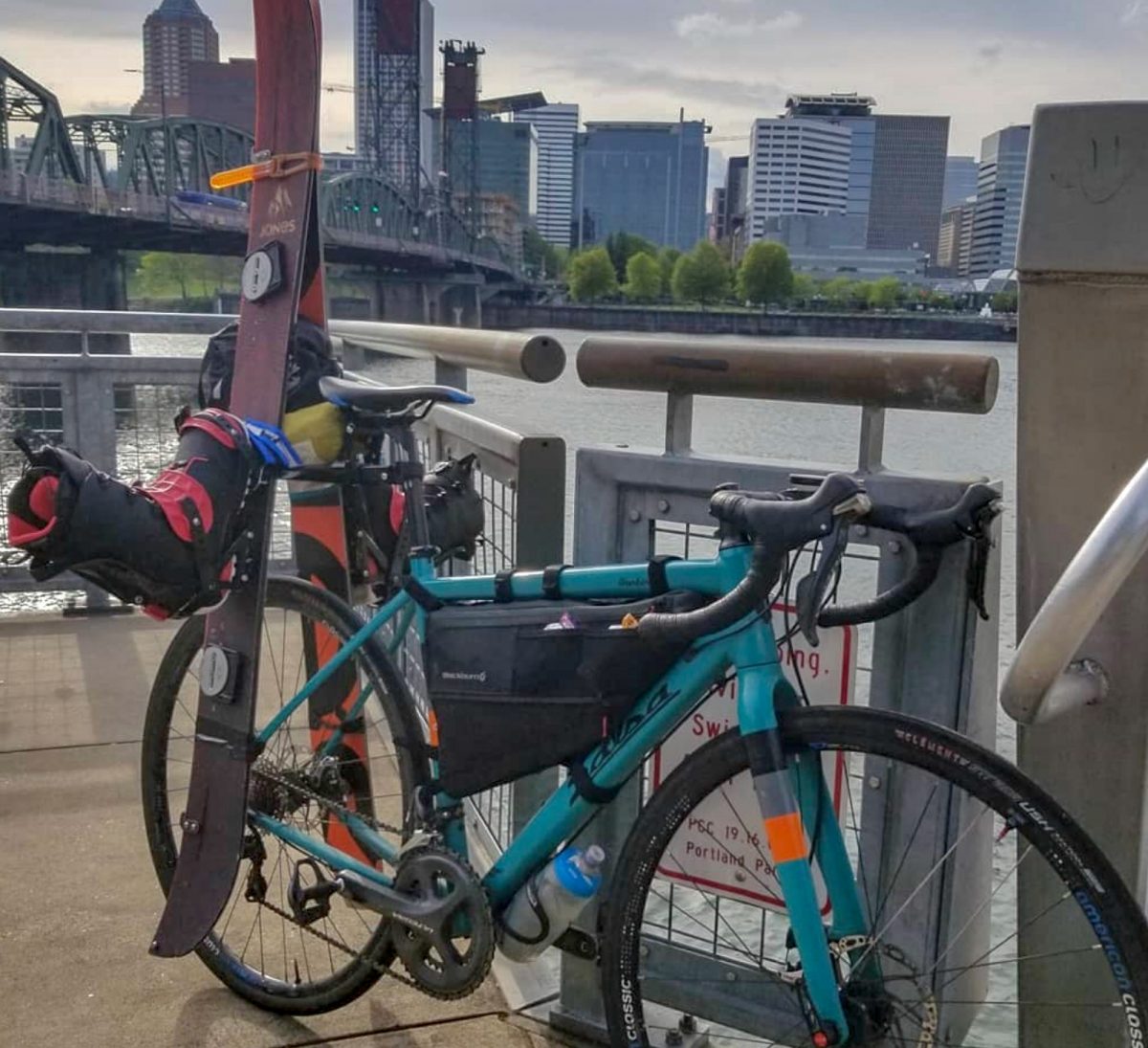 Edick’s trusty Salsa Warbird was up for the task.

Edick and Lehman grabbed some climbing gear and their skis, strapped it all to their bicycles, and headed out around 4:30 pm on a Tuesday. They kept their ride simple and direct by taking the Springwater Corridor as far as possible, then connecting to Highway 26 to get up to Timberline Lodge. “It was a long slog getting up to Timberline,” Edick recalled. After a stop for snacks at a store in Rhododendron, they rode the rest of the way up to the lodge in darkness. Edick said he was initially worried about the safety of riding the highway, but with the wide and relatively gravel-free shoulder, he said it felt much safer than expected.

They reached Timberline Lodge around midnight, after grinding up the final grade in their easiest gears. Once their bikes were parked, they hung out, ate some food, and took a nap on their sleeping pads for a few hours.

They started for the summit around 6:30 am and made it to the top around 11:00. Once clicked into their skis (Edick was using a splitboard), they carved back to the parking lot in a mere 30 minutes or so (not before Edick had a scary slide across an ice field, a sign of how tired his legs were). Eager to keep descending, they re-packed their bikes and began the downhill roll at about 1:00 pm.

During lunch in Rhododendron, Edick said they doubted they could make the 24-hour time limit they’d challenged themselves with. But after a beer and food, they felt recharged. “We realized it’s possible to get back in 24 hours, so we powered the rest of the way.” 40 miles of pedaling was all that remained.

Drafting behind each other for maximum speed and efficiency — and with encouraging cheers from passersby who realized what they were doing — Edick and Lehman reached Portland and the Willamette River in 23 hours and 50 minutes. After a quick swim off the Eastbank Esplanade, they posed for a photo to mark their accomplishment. 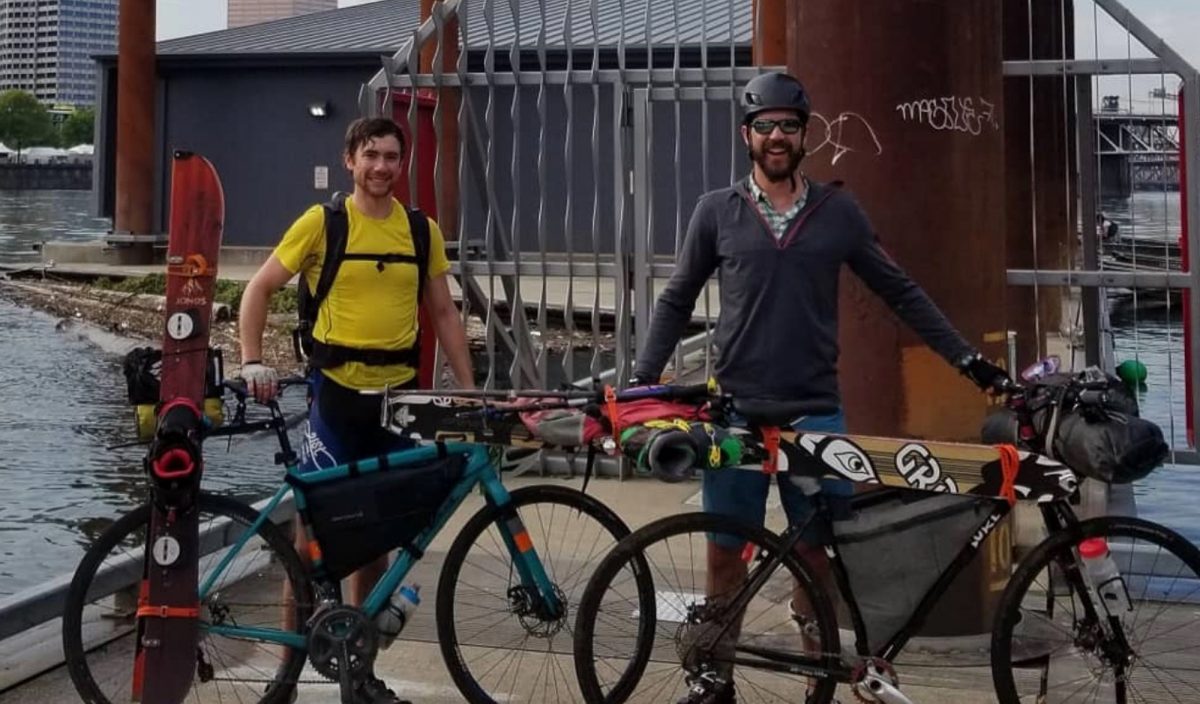 Would you do it again? I asked Edick. “I would love to… Get a couple more people and get a small crew up there. It was such a fun experience.”

To quote Wayne and Garth while bowing deeply , ” Were not worthy.”

This is the dumbest thing I’ve seen all day. I love it!

When did this happen? Since there was mention of swimming in the Willamette, I’m guess not this February.

From the article, “A spring day in May last year.”

I thought the same thing. Especially since they seem to eschew racks.

Amazing feat and well documented. I thoroughly enjoyed it.

I am curious to know what they did with their bikes and all their camping gear during the climb. Are there bike racks and lockers up at Timberline?

I was trying to decide why this story made me smile so much. Then I realized that it is like one of the quests from classic literature. Like Homers ” The Odysssy” our hero’s departed from our “Ithaca on the Willamette” on a seemingly impossible quest. Except instead of having to battle and survive the Cyclops and Hydra they had to battle and survive monsters every bit as dangerous and malevolent. These monsters have claimed many of our compatriots. Yes we all smile because they succeeded in their difficult physical quest while surviving their inevitable brush with the “Auto Zombies”. We raise our glasses to thee.

I had no idea you could ski down from the summit, (I don’t ski or climb) that sounds amazing though!

I’ve never skied from the summit, but you can ski down slopes that you would never consider walking down, depending on the snow.

Only under certain conditions. The final 1,000ft to the summit can be very dangerous. Most use ice axes and crampons. If there is enough snow coverage, it can be skied.

Sure, maybe down from the top of the Old Chute and around the west crater rim. Just don’t be a dumb ass and go down the Pearly Gates or the Old Chute with climbers coming up. My point here is to direct potential climber readers to climbing-centric beta sites, rather than leaving questionable climbing beta on a bike-centric site.

This got me wondering how long it takes a raindrop to make the same journey (the downhill leg) from the summit to the Willamette. Well first of all, it doesn’t, because that water flows to the Columbia. But ignoring that, it’s no contest because that raindrop is actually a snowflake at that elevation, and spends the first couple years of its earthbound life inching along in a glacier. That’s no fun. In yo’ FACE, raindrop!!!

I’ve heard of ‘doing an Everest’ on a bike, can we call this one ‘doing a Hood’?

(By the way, this is totally unreal! Good for these two guys!)

Goran Kropp summited Everest without oxygen after bicycling with 300 lbs of climbing gear from Stockholm Sweden to Everest base camp in 1996. He even eschewed the traditional climbing route of fixed ladders and ropes that are set by the Sherpas for paying customers.

This Hood round trip by bike and ski is impressive, but certainly not without precedent.

Maybe he got his idea from Joe Frank –
https://www.joefrank.com/jfplayer.php?play=8699&sType=LISTEN

That dude is out there. I’ve heard some of his work on the Home of the Brave podcast, including the K2 piece. Truly engaging and fascinating work.

“…but you can ski down slopes that you would never consider walking down, depending on the snow.” Either you are one of those Warren Miller ski pros,or you’re talking about the long slog from Crater Rock to the car.

For the sake of internet knowledge, please give a specific example of such an area and conditions on Mt. Hood where you would never consider walking down for safety reasons. I’ve climbed a number of Cascade volcanoes by various routes and never on a steep slope have I thought, “Damn, I wish I had skis instead of mountaineering experience, down climbing ability and this stupid ice axe, crampons, and a rope with anchor material.

I wasn’t thinking specifically of Mt Hood, though there are definitely some faces at Meadows and also at Ski Bowl that would be difficult to descend by foot, but which people routinely ski. The point I was trying to make is that you can ski (much) steeper than you can hike.

People ski off the summit of Mt Hood all the time when the snow is good, including the Wyeast face and other 40+ degree slopes that are ‘no fall’ zones, and which can only be climbed with ice axe, crampons, and extreme caution.

Yup. It’s all about managing that velocity. Those skiers who can do so are practically flying. It’s amazing.

Brought back the memory of a ER Dr in the 1980’s who used to ride his bike to Mt Hood and the climb it and then ride back. He did it several times. An exceptional endurance person before it was commonplace. Can’t remember all the detail. I think his name was Steve Bauman or something like that.

I wondered if anyone would remember Dr Cameron Bangs. He always did his bike-summit-bike trips starting at the east end of the Ross Is Br. But Powell/Hwy 26 were an easier ride back then.

If they do this again, they should definitely document it with a little film crew. This would make a great documentary short! OR I’d love if they’d do a little Q and A somewhere around town. This is such a rad undertaking.

Truly amazing and inspiring, even though it would take me closer to 48 hours than 24.

This is great! Thanks for doing the writeup! If anyone’s interested, I wrote a little article about our adventure here: