Detail of design proposed at Tillamook and 21st.

There’s more good news for inner northeast Portland bikeways: In addition to the new Sullivan’s Crossing Bridge over I-84 and a (potentially) revolutionary new neighborhood greenway on NE 7th, the Bureau of Transportation is planning to update and enhance the bikeway on Tillamook.

Tillamook is one of Portland’s legacy greenways, first established in the 2000s when they were called bicycle boulevards. This key east-west bike route that connects north Portland and the Lloyd to the Hollywood district was one of six greenways identified in the City’s 2015 Neighborhood Greenways Assessment report because it failed to meet national standards for auto volumes. For being such a key part of the bike network, Tillamook’s meager accommodations include only sharrows and a few signs.

To help reduce auto use, lower driving speeds, and improve safety for walkers and bikers, PBOT has a host of minor changes planned. Among them are new crosswalks and other pavement markings, signage, flipping stop signs in favor of the greenway, removal of auto parking at some intersections, speed bumps, and more. The $150,000 project (which includes non infrastructure costs like planning) will improve a 1.5 mile section of the street from Flint to 28th.

When it comes to diverting auto users to other streets, PBOT is eyeing the intersection of Tillamook and Williams and/or Martin Luther King Jr. Blvd. In this section, current analysis shows there are about 1,200-1,450 drivers per day — well above the City’s safety threshold of 1,000.

Notable in the initial design proposal is the removal of auto parking near the corners of 21st. This is an example of “intersection daylighting” that activists have been clamoring for for years. PBOT refers to it as “safety parking removal” in project documents. Oregon law currently prohibits parking within 20 feet of an intersection but the law is rarely enforced. In addition to the auto parking prohibition, PBOT wants to add median islands, crossbikes and crosswalks, and a speed bump in the middle of the intersection.

Another element of this project worth watching is the fate of the little traffic circle at the off-set intersection of Tillamook and 7th. On the project website, PBOT says whether or not to keep the circle in place will be decided this fall as part of the Lloyd to Woodlawn project. During this month’s Bicycle Advisory Committee meeting last week, PBOT Project Manager Nick Falbo made it seem like it would probably be removed. “I think that traffic circle has got to go… It just doesn’t work well,” he said.

PBOT expects to build this project in Spring of next year. To learn more, and talk to project staff, attend the open house set for August 1st at 5:30 pm.

Been riding on Tillamook frequently since I moved to Rose City Park ~2 years ago. It is mostly lovely, but disappointing to see that the worst part (Hollywood) is not in the plan at all. I definitely plan on asking about it.

…at ONE intersection in Portland.

PBOT – when you turn stop signs to favor the greenway, you HAVE to put in diverters. Are we still in the process of learning that?

[Tilamook] one of six greenways identified in the City’s 2015 Neighborhood Greenways Assessment report because it failed to meet national standards for auto volumes. 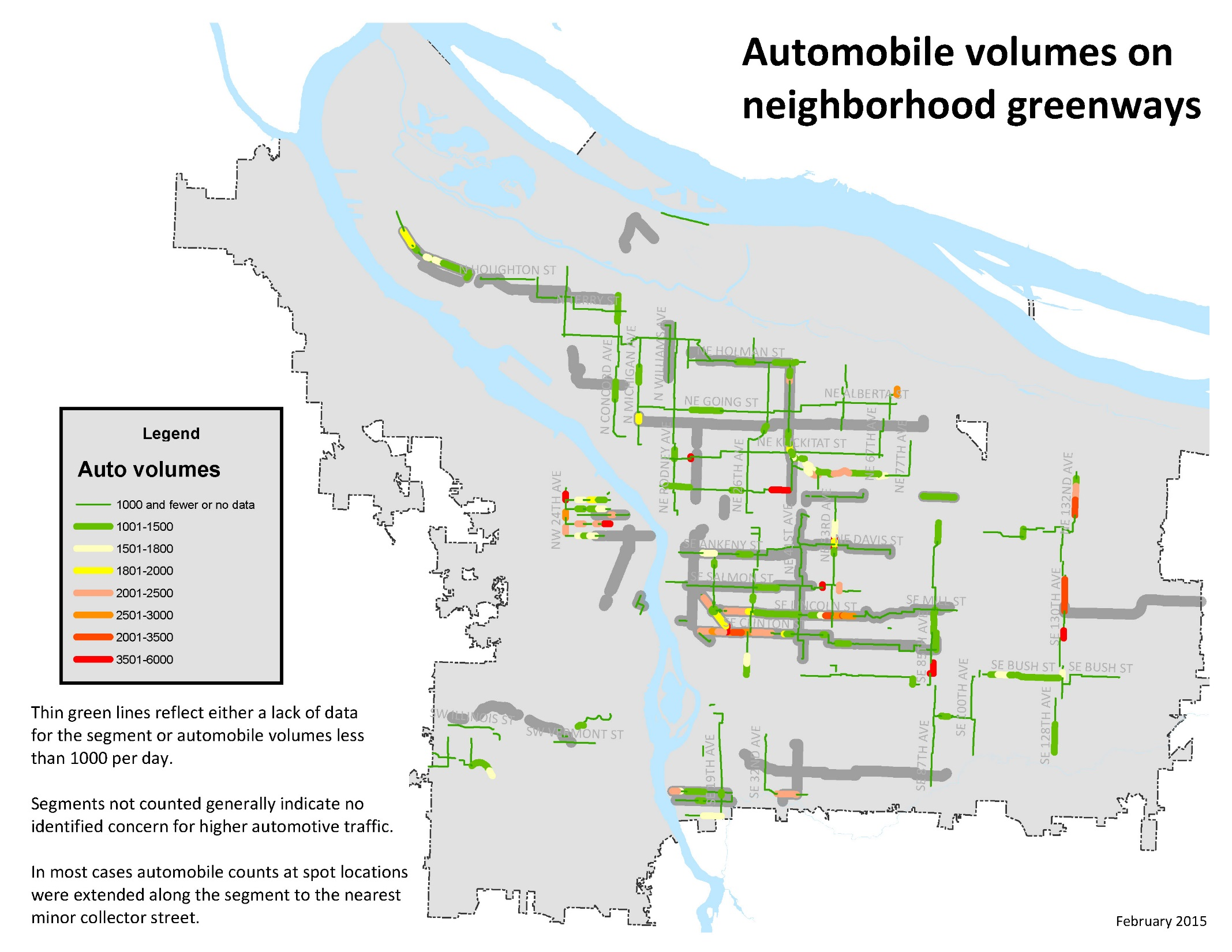 Is the city violating the law, somehow? If anyone is violating the law by parking too close to the intersection, it is the people who are doing it. Unless there is another law you know about that requires PBOT to prioritize enforcement of this one.

crossing MLK on Tillamook has gotten sketchier as more drivers have been using this as a cut-through. I would love to see Tillamook a “right turn only” on to MLK in both directions for motor vehicles and let bike cross straight.

PBOT calls NE 15th an “other bikeway” with no needs to address but as a bikeway it’s a joke and that crossing is why I use Knott instead. I rode almost the entire length of the Tillamook/Hancock greenway from 92nd this afternoon and for my money it’s one of the worst spots.

I wish they would address Tillamook further east. There are a lot of problems from 33rd up through Hollywood as well. I think making traffic on Tillamook at the 33rd intersection turn right in either direction might help but it will probably never happen with the high school right there.

Can we trade the speed bumps for more diverters?

The corners are blind but, in my experience, not because of parked cars. The dog-leg shape of the through the street, 21st, is the culprit.

Our whole family uses Tillamook frequently on bike. I appreciate that PBOT sees that 21st is a really dangerous intersection–especially for kids and other more vulnerable users. The treatment there will maybe make it a bit safer, but it’s going to be a dangerous crossing until there’s something to stop southbound traffic which can zoom into the intersection without knowing what they’re going to find. I can’t see how you can really design it to avoid the conflict between east-bound cyclists and southbound autos–without, say, a four way stop.

I ride Tillamook often. Crossing MLK is not a problem because there is a traffic light. Crossing 7th is more of a problem at times, but the 7th greenway’s diverters should decrease traffic volumes. Crossing 15th won’t be any problem if traffic on 15th has a stop sign. On 21st, a HAWK beacon might be a good idea, as the waits to cross can be long. 33rd is no issue since the greenway moves to US Grant where there is a signal. If stop signs are turned, diverters will be needed.

It is nice that PBOT is willing to spend a little money here.

What is ‘revolutionary’ about the NE 7th concepts?

To the sections of the map that say “Diversion?” I say YES!

I bike this greenway to/from work daily from NE 74th all the way in to Flint. Most of the cut-through issues start around NE 47th & Hancock, and then just increase as you head in. I’ve kept up with cars that have driven Tillamook all the way from Sandy to NE 17th, right before the NE 16th diverter.

Hopefully Phase 2 happens sooner than later. A diverter at Sandy & Tillamook would help the Hollywood cut through a ton. So many drivers are just using Tillamook to get from Sandy to Broadway.

How is the 21st intersection any different or better than it currently is? Still prioritizes drivers with the large turning radii, limited sidewalk space and making cyclists continuing on a perfectly straight road to weave around and avoid raised curbs.

Would be so easy and actually improve something if they just squared up the corners, moved stop signs to 21st and put in diverters to only allow bicycle entry onto Tillamook in either direction.

Vote Up0Vote Down
« The Monday Roundup: E-bike criticism, peak bike, cheat the wind, and more
Family biking profile: Sara Schooley is sure you’ll like e-bikes too »