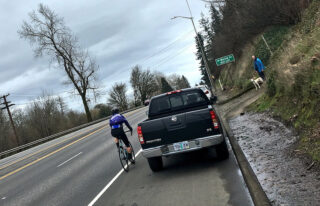 The Oregon Department of Transportation has begun an internal process to analyze a safety risk to bicycle users on Highway 30.

After we highlighted how people park their cars in the shoulder of the busy highway near a Forest Park entrance north of Linnton last week, we urged people to flag the issue via the AskODOT system.

It turns out at least one person took the advice and did so.

A few days after our story went up we heard from ODOT Region 1 Public Information Officer Don Hamilton. “In response to an AskODOT query,” he shared via email, “ODOT will conduct a parking prohibition study at that location. This will take up to six weeks to complete, with appropriate action, if any is necessary, to follow.”

Hamilton said his agency couldn’t act without a formal request being made because they are obligated to follow existing laws, “And everything we see happening here is in the parameters of the law.” (Refer to ORS 811.550 (2), “Places where stopping, standing and parking prohibited”.) Hamilton also advised that “People who ride bikes on the shoulder need to use caution in that area, as you do whenever you come across a hazard.”

As for the inquiry, we’ve confirmed that ODOT has the authority to prohibit parking at this location, as long as the regional traffic engineer signs off on it. Hamilton said they will investigate the situation. If one of the several justifications is present, they will consider a no parking zone. Those justifications include:

— Safety: This usually, but not always, has to do with sight distance for vehicles entering from a side street or driveway.
— Congestion: Vehicles parked in the area impede the flow of traffic.
— Damage to the facility: An example might be if parked vehicles are causing the shoulder to slough off.
— Frequent use of the facility for a purpose not intended: This could be any number of things (unauthorized vending, dumping of trash or sewage, etc.).

Hamilton added, “There are of course other factors unique to specific locations that also need to be considered such as does the local jurisdiction support a parking prohibition or would a parking prohibition negatively impact the community.” (Note: There are no businesses or residences anywhere near this area. The parking is used only for Forest Park access.)

ODOT’s internal review of this issue is likely to take up to six weeks. Check back for an update before the end of March.

The squeaky quick release gets the safety enhancement…

This statement is so telling:

“everything we see happening here is in the parameters of the law… people who ride bikes on the shoulder need to use caution in that area, as you do whenever you come across a hazard.”

Basically admitting the current design and law creates and permits a hazard.

Exhibit A in the inevitable lawsuit when someone gets injured or killed taking the lane here.

Unfortunately after listening to the recent Strong Towns podcast about ODOT failures I’m worried there is no way even something ten times as incriminating as this would lead to anyone actually being held responsible for death on their roads.

With the abundant evidence that ODOT has routinely both failed to take action where it was needed and has taken many inappropriate actions, this statement of arrogance sticks in my craw:

“…This will take up to six weeks to complete, with appropriate action, if any is necessary, to follow.”

It’s like the staff at ODOT live in an echo chamber of their own making into which the cries of anguish over the many unnecessary deaths and injuries caused by the way ODOT manages both roads under its jurisdiction and speed limit reduction requests for roads not under ODOT jurisdiction cannot penetrate.

Time for a reality check at ODOT. ODOT actions are rarely appropriate.

Hasn’t anybody come up with problems during rush hour heading south on 30 to the St. John’s bridge? I’ve complained about the cars backed up in the shoulder lane creating a hazard before…

I’ve resorted on more than one occassion riding to the left of the vehicles standing in the shoulder.

it seems none of the justifications have anything to do with people who don’t use the road in a vehicle. if it’s unsafe for vehicles it could be restricted but unsafe for bikes or peds… crickets

Given that the hazard is only an issue when drivers are using the area, it’s logical to address how they drivers use the area in order to reduce the hazard.

Exactly why I proposed framing the problem as being unsafe to children exiting the parked vehicles; car parking is too close to speeding cars on the roadway, and those bicyclists who speed past on the shoulders. Install a retaining wall to create a ‘safety buffer’ between the parked cars and the road shoulder. Think of the Children!!

I’d like to suggest that it might be appropriate (especially to whoever has an open ask odot ticket) to ask instead why this shoulder is not striped as a bike lane.

It would be unsurprising if, considering the precise wording of the justifications provided by ODOT, there is not sufficient technical reason to implement a “no parking” zone specifically.

However, there seems to be ample technical support that this portion of the highway should provide at least a buffered bike lane. And for once, pavement width is not limited!

Plus, we can demonstrate that this is a popular bicycling route from Strava’s data [https://labs.strava.com/heatmap]

With all that in mind, we consult ODOT’s own Highway Design Manual chapter on Ped/Bike design [http://www.oregon.gov/ODOT/Engineering/Documents_RoadwayEng/HDM_L-Bike-Ped-Guide.pdf]. In there, specifically the chart on page 1-3, the “Urban/Suburban Recommended Separation Matrix” makes clear that this location should have Full Separation, which includes buffered bike lanes, cycletracks, or a separate shared use path.

Certainly this highway deserves some significant capital work. But if we’re just thinking about near-term signs and paint, it seems like we should also be asking why this is not a bike lane.

With some small edits, your comment would make a great open letter for every bikeportland.org reader to then sign and send to our elected officials and ODOT, demanding change.

Exhaust more of my supply of “I Parked in a Bike Lane” stickers.

I agree–it’s a terrific idea to make, say, Scappoose or St Helens to St John’s Bridge (where bike lane designation begins, such as it is) a bike lane. It would be a dramatically better solution than just no parking signs at the BPA road, and realistic. A couple reasons why:

First, there are at least two other problem parking / leaving vehicles on the shoulder locations that are just as bad as BPA road, not including downtown Linnton where at least speeds are lower:

the house at 11650 NW St Helens Rd just west of Linnton which has lots of parking but apparently it’s easier to leave vehicles on the shoulder:

and around the strip club at 16900 NW St Helens Rd a few miles farther west near the bottom of McNamee:

and as “B” notes SHOULD provide the full separation called for in the Urban/Suburban Recommended Separation Matrix in ODOT’s bike/ped Design Guide:

(FYI in that PDF it’s easiest to search for “separation matrix” as page 1-3 is hard to scroll to.)

Vote Up0Vote Down
« Local bike shops come to terms with their industry’s ties to the NRA
Do this Saturday night: Velo Cirque Bike Show, then Oregon Timber Trail Panel and Slideshow »