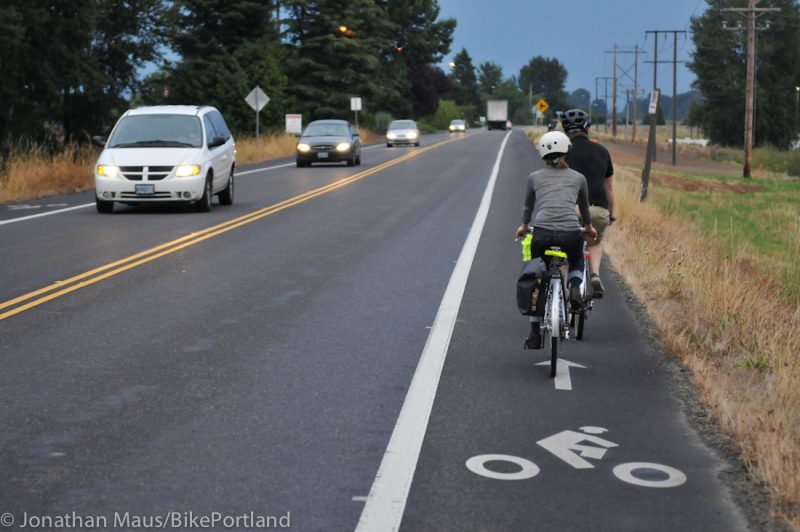 Marine Drive is a very popular corridor, and people drive way too fast on it. Hopefully that’s about to change.
(Photos: J. Maus/BikePortland)

24/7 speed enforcement is now a reality on one of Portland’s most dangerous roads. After years of deadly crashes, the Portland Bureau of Transportation has just flipped the switch on two speed enforcement cameras on NE Marine Drive. The cameras started issuing warnings today and citations will start being mailed to violators on March 22nd.

PBOT has installed the cameras in two locations along Marine Drive where drivers have well-documented speeding problems. At NE 33rd Avenue, where a traffic study found 995 people a day driving at least 10 mph over the 40 mph speed limit. And at NE 138th, where PBOT found 485 people driving over 10 mph over the 45 mph speed limit every day. Underscoring the speeding problem on Marine Drive is the fact that the design of the road is very wide-open. Because it’s on a levee where buildings and other structures are few and far between, there’s very little visual clutter. That makes road users go way too fast. Add in the fact that there are very few traffic signals and a relatively narrow cross-section with just one lane in each direction in addition to bike lanes — and you have the recipe for disaster.

According to PBOT, the percentage of “lane departure” crashes on Marine Drive is more than three times higher than the citywide rate.

All of this is especially worrying because of the role Marine Drive plays as a gateway to popular riding destinations in the Columbia River Gorge. 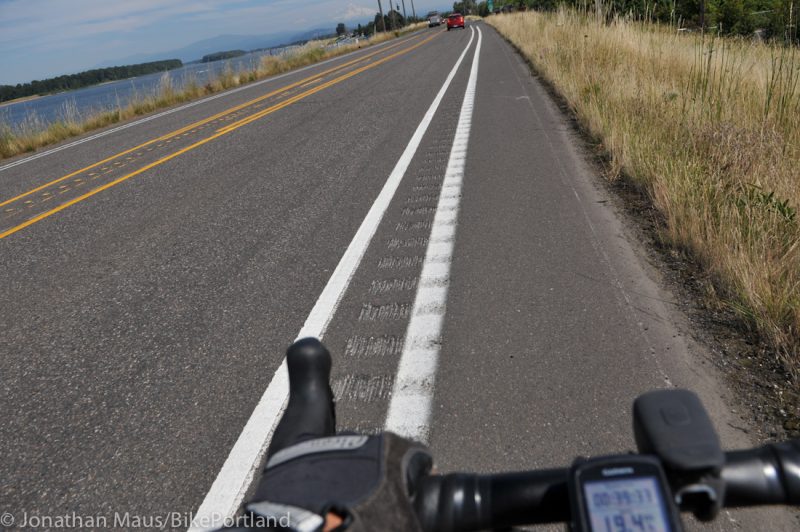 With a road this straight and uncluttered, we need a lot more than just clever striping and rumble strips.

Marine Drive is the fourth street to get what PBOT calls a “speed safety camera” (“safety” added for better public relations) after their successful lobbying for a state law in 2015 that gives the authority to install them. The first one was installed on Beaverton-Hillsdale Highway in 2016. And last year the city installed cameras on SE Division and SE 122nd. All these streets are on an infamous list of High Crash Corridors — roads that make up just eight percent of Portland’s streets but account for 57 percent of our fatal crashes. 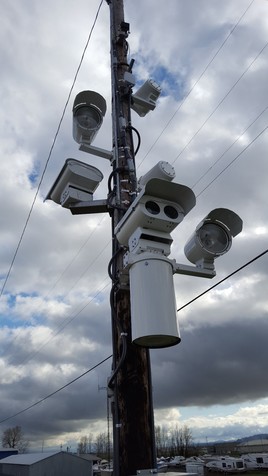 “Safety cameras are one of the best tools we have for slowing down traffic and saving lives,” PBOT Director Leah Treat said in a statement released yesterday.

The results of existing speed cameras speak for themselves: PBOT claims that the amount of people who speed on SE 122nd decreased by 91 percent after cameras were installed. The number dropped by 71 percent on Division.

This is really great news.

Another bonus: State law requires that all the money received from speed camera tickets must either go back into the program or pay for safety projects on High Crash Corridors.

Learn more about PBOT’s efforts to improve the safety of Marine Drive on their website.

Love the intimidating camera set-up looks like some kind of stationary traffic robot. Now all it needs is a second arm with a laser blaster in it, for discouraging repeat dangerous repeat offenders.

I’m glad they found a way to re-purpose Johnny 5… “Number 5 is alive!”
Wonder if they found it in a junk yard in Astoria?

Violence is never the answer 🙂

There should be signs to go with them: “Speed limits enforced by live traffic camera 24/7.”

I’ve heard that PBOT might request a lower speed limit on BH Highway from near the Portland Christian Center church to SW 65th Ave. It is 40 mph there, but 35 from 65th to near 107th Ave.

Thank you PBoT!
[I just wish this had not taken so long…to wind up through the fiction of state law and local politics.]

“Because it’s on a levee where buildings and other structures are few and far between, there’s very little visual clutter.”

There is a whole lot of road to speed on between 33rd and 138th. Will this make much difference?

Awesome news – thanks for reporting this story.

Hey, thanks for all your reporting!

The air is literally cleaner on BH Highway by the safety cameras. I’ve been riding and walking there for several years. Why not make all of Marine Drive as 30 mph? Marine Street.

I meant this to say that people drive and ride cars and motorcycles at lower speeds now versus before the cameras were installed on BH Highway. The air is simply cleaner because of it.

Yes, I noticed a dramatic difference as a driver. In the past, anyone going the speed limit would be constantly passed by people going 10 or 15 mph faster. Now going the limit seems much more the norm, and you can even go slower without standing out dramatically (this is all non-rush hour). The combination of signs, camera and speed reader get noticed.

Marine at 33rd needs a traffic light. Turning west bound from 33rd to Marine is very difficult at times.

Do fixed speed cameras reduce speeding just where they are located, or for X miles on either side? Data anyone?

I don’t know. I still notice speeding on BH Highway once people are away from the cameras. PBOT will install new crosswalks and eliminate a right-turn lane this year on BH Highway, though.

Install non-functional mockups of these across the city. Switch these with functioning devices at a variable-ratio schedule, i.e. randomize where and how long these are located. If DOTs actually wanted to get rid of speeding, it is this easy.

After the redid the one way west to removed the turn off lane to Marine Drive they put up a 55 mph sign. Why! It isn’t until around Blue Lake that it changes to 45 mph which is still too fast. So Drivers & trucks come off freeway & just continue driving the same high speed.

Excellent. Now we just need a few hundred of dummy camera installations that look just like that one. The cost would be next to nothing, and they would still be effective.

Move the speed limit back to 45, make all side streets that come up to Marine Drive “right turn only” (138th, 148th, 158th, and 185th) and direct traffic to the new signal going in at 122nd, put in turn lanes to the side streets not to impede traffic on westbound Marine Drive, make the turn lane to get on to 122nd from Marine Drive westbound at least 100 yards long, make a “through lane” on Marine Drive west at 122nd on the right side and don’t stop westbound traffic unless the front car on 122nd has been there for at least 30 seconds trying to turn left yet they have a blinking yellow arrow to be able to turn if traffic allows (sometimes there is no traffic east/west at 122nd and the left turn person doesn’t need to stop traffic flow), and make an additional westbound lane at 122nd for 100 yards for traffic to get up to speed to not disrupt flow of traffic. The challenge will be the traffic that could back up on to Airport way and that needs to be considered as well.

Accidents often happen where vehicles congregate at different speeds, shocker. The other shocker is that accidents happen when people drive recklessly and finally the last shocker is that everyone is just trying to get to their destination in a reasonable amount of time and that has doubled in the last ten years making frustration. Lowering the speed limit is not the answer, shocker… We need to increase flow, not decrease flow and that should be the objective since the flow will make things safer for everyone.