The Oregon Museum of Science and Industry is located in a prime location transportation-wise. It sits at the confluence of the Eastbank Esplanade path, the carfree Tilikum Bridge, a streetcar and MAX station, and there’s even a submarine dock and a major railroad line nearby!

When their latest plans come together it’ll be even more impressive.


Last week Portland City Council moved the “Water Avenue Realignment Phase II” project into the Transportation System Plan as part of the Central City 2035 Plan update. Water Avenue currently makes a big “s” through OMSI’s property — which stretches west of Water to the Willamette River and from Market Avenue in the north to the Tillikum Bridge in the south. According to their new Master Plan (you can download it here), OMSI wants to straighten out that s-curve so Water Avenue runs adjacent to the railroad line. This would allow OMSI to create higher quality, people-centered spaces, plazas, and smaller “green streets” in the interior of their campus as new buildings are constructed in the future (see renderings below).

Here’s the vision for what OMSI calls “Tilikum Plaza”: 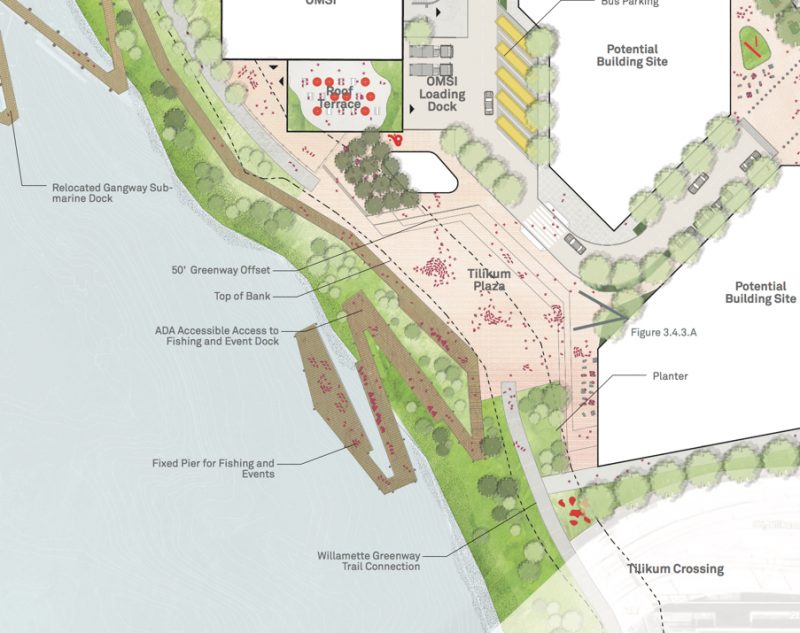 And another look at the future of the southern part of the campus that shows tighter integration with the existing streetcar stop: 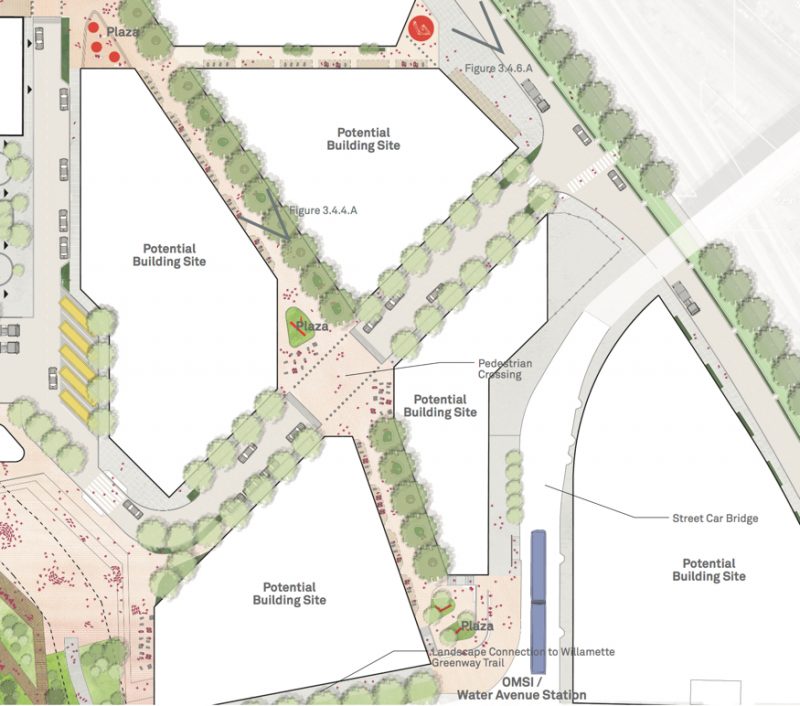 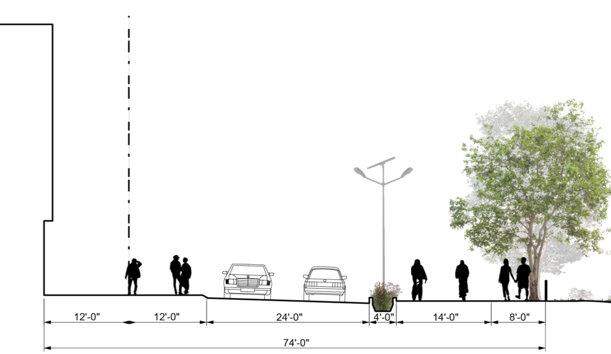 And this is an artist rendering that shows the bikeway (on the right): 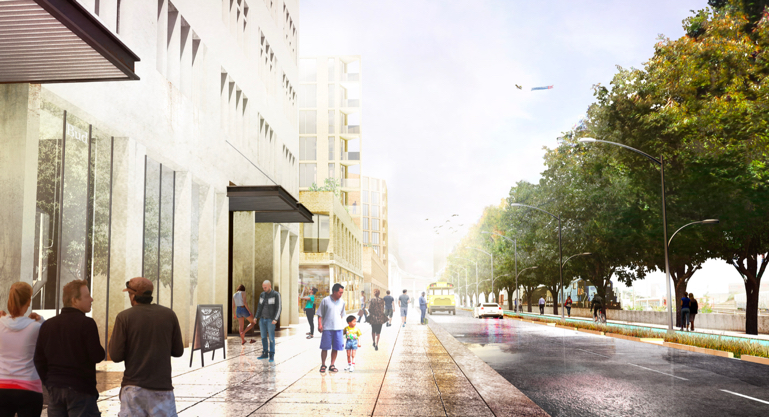 Here’s more from the plan:

“The design of New Water Avenue creates rich opportunities for the intersection of disparate uses and experiences. Occupant oriented ground floor uses promote activity on the street level, while generous pedestrian sidewalks and covered walkways on the west side invite passers-by to engage and interact with ground oor occupants. Rolled curbs allow for easy, informal loading while large, rolling garage doors allow for production to spill out onto the sidewalk, contributing to the spectacle of street life.

Though Water Avenue serves as the primary thoroughfare for freight, the design also emphasizes bicycle circulation through the inclusion of a designated two-way cycle track. A vegetated strip traveling the whole length of the avenue serves as a buffer between vehicles and cyclists and while also collecting stormwater.” 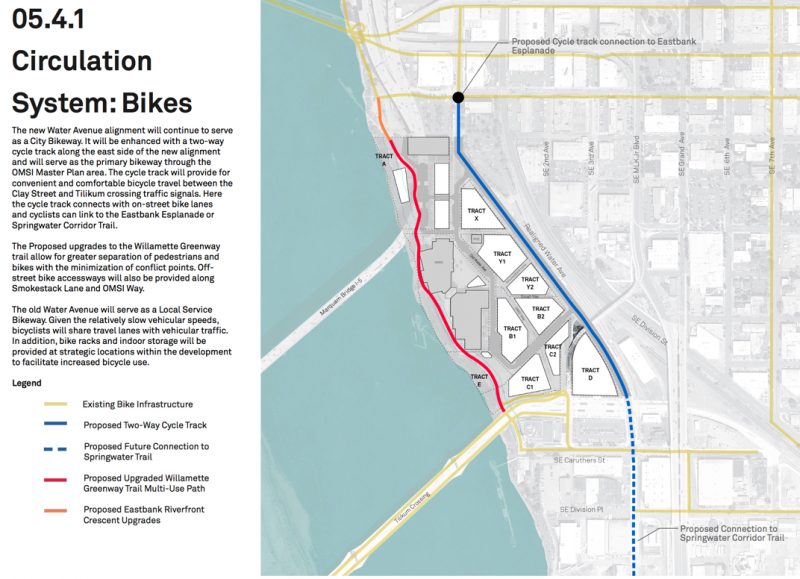 In the “Circulation System: Bikes” section of the plan, OMSI says the new bikeway will “serve as the primary bikeway through the OMSI Master Plan area,” and “will provide for convenient and comfortable bicycle travel between the Clay Street and Tilikum crossing traffic signals.”

But that’s not all. OMSI isn’t trying to discourage bicycle traffic from its inner campus or from the existing path along the river. They’ve proposed upgrades to the Esplanade path, “to allow for greater separation of pedestrians and bikes with the minimization of conflict points.” The riverfront path adjacent to OMSI has seen its share of conflicts. Two years ago the museum put up signs encouraging “fast bikes” to use bike lanes on Water Avenue. According to City of Portland counts, about 2,800 bicycle riders pass the OMSI campus via the Esplanade and 1,600 use Water Avenue on an average day.

Part of OMSI’s motivation to improve bicycling conditions is to encourage more people to ride to the museum. According to findings presented in their master plan, if current modal shares (how people get to the museum) stay the same, OMSI would need to add 152 auto parking spaces (or 790 total) to prevent their existing lots from filling up. “However, given the accessibility to transit and bike infrastructure,” states the plan, “OMSI will likely see a higher utilization of these modes by guests and a lower parking demand in the future… should OMSI increase the museum guest walking, biking or transit mode share by five percent, the peak parking demand could be reduced by about 25 cars per day.”

This looks pretty amazing. I’m excited to see improvements in that area.

I looked through the PDF and there’s something interesting- the two-way cycle track just sort of ends right at the MAX tracks at the bridgehead, with a note “proposed connection to the Springwater Corridor”. Now this will probably take 10 years to implement, but I thought it was interesting that they just punted that one down the line, so to speak.

Most of this looks good. It’ll be an exciting transformation. I do worry about: “Rolled curbs allow for easy, informal loading..” So UPS and Fedex trucks can drive up on the sidewalk anywhere. Sounds like they just don’t want to provide on-street loading zones. Put trucks on the sidewalk instead!

Great point Doug! The rolled curbs and easy access also make it hard to plant street trees. BES is also not supportive of trees in 4′ wide stormwater planters, and even if you could get them approved, they are too narrow for broad-canopied street trees. The rendering shows trees between the cycletrack and RR which is great. With proper soil preparation and tree selection, these could be large, impactful trees, but I would still like to see some trees on the street. Maybe there could be places every 30-50′ where buffer between the street and the cycletrack widens to 6′ and the swale is interrupted (flow-through or into storm drain) and a large tree is planted?

You’re right! They should have street trees on that side, rolled curb or not. I also note that they’re talking about “allow production to spill out onto the sidewalk” What? Factory workers assembling widgets? Software manufacturers hammering together their product?

Notice the vertical dotted line in the cross-section. Only 12′ of that sidewalk will be in the public right-of-way. The rest appears to be private property (where “production” could take place?). Well, there should be street trees in that 12′ sidewalk, to shade the sidewalk and the roadway, to cut down on the heat island effect.

I’m also wondering about the track-side sidewalk, which is shown as 8′, but with trees in it, which cuts it down to 4′. Well, you can always walk in the cycle track.

Will they plan to clear the leaves out of the bike track? Probably not.

This is exciting but if its going to be a 2-way cycle track, then shouldn’t it be placed on the side of the street where they are designing for ground floor retail versus locked behind a bioswale for 5 blocks?

If your destination were in the ground-floor retail spaces, wouldn’t you take the local service bikeway through the campus? I imagine the greenway would primarily serve to get commuters off the esplanade by providing an actually safe alternative.

I can’t speak too much to specifics here because this is just an early design concept but in general my preference in the situation you’ve proposed would be no different than if I were driving a car –I would want to take the street that gets me closest to my destination in the easiest, most direct manner which would likely be Water. Ave.

I think a 6′ wide bridge and a painted crosswalk every 200 feet would provide enough connection. Having the cycle track run along the RR tracks means there are zero turning conflicts. I prefer the fast/safe cycle track over increased danger, slower speeds bu better connectivity

Thanks for the reminder, I’m always looking for a place to dock my submarine. 🙂

Interesting! A sidewalk on the building side with rolled curbs for sidewalk loading and unloading. Then a 2 way motor vehicle street separated by an impassable bioswale, then a 2 way bike path, then a sidewalk, then rail tracks.

It looks awesome. I’m sure all the rich people that move in will appreciate it while those of us displaced will be dealing with our new homes that lack any good infrastructure. Maybe I can win the lottery to get one of the “low income” apartments?

Chris I
Reply to  billyjo

This area is extremely well served by transit. This is where we should be building more housing.

soren
Reply to  Chris I

The USA’s capitalist real estate market has been *eliminating* low-income housing at an unprecedented rate. Even Freddie Mac now admits that:

“Absent some kind of government intervention or subsidy, there is just not going to be any investments made at that lower end of the market.”

“Though I-5 serves as the primary thoroughfare for freight”

One thing I wish this master plan had is a pedestrian bridge over the railroad tracks. Currently there is a nearly 3/4 mile gap in pedestrian crossings in this area (from SE Clay/1st to SE Division/8th). This isn’t a huge issue now, since the only destination on the other side of the tracks is OMSI, but as more retail populates this section of the central east side it would be nice to have an efficient way for pedestrians to get from place to place. Personally, I would like one near SE Harrison where there is already a pedestrian path leading from the MLK viaduct to 3rd Ave.

I agree, Grant! This is very much needed. The City missed a huge opportunity by not including a sidewalk on the street car viaduct over the RR tracks. I think a retrofit would be possible and likely far less expensive than a separate bridge.

Chris I
Reply to  Grant

This is also needed to connect Trimet Buses to Division or even Hawthorne. We have this wonderful transit bridge with terrible connectivity on the east end.

No trees, no benches, no concrete table and a rolled curb all on the ped/retail side, as pictured, is an invitation for drunks, terrorists, or “sport” motor vehicles to mount the sidewalk because they can.

Would they encourage Springwater Trail traffic to go thru the campus, follow Water Av., or follow the esplanade? And which one would be signed as the route to/from the Max/streetcar station at the east end of the Tillicum Crossing to/from the Springwater? There are some possibilities here. This also suggests that OMSI will expand from the current building to two or three additional ones. One, I suppose, might be used for exhibits like the recent Pompeii show (which was terrific, by the way). That might be interesting.

OMSI needs to let the Esplanade be the Esplanade and stop trying to claim it for their own use. If I’m riding through from the Springwater, I sure as hell am not going to like having to detour, wait for cross-traffic on Water, then ride a wholly redundant cycletrack for two blocks before having to cross Water again and return to the Esplanade. Mark my words, this is OMSI laying the groundwork for closing the Esplanade entirely for events, exhibits, etc. on a regular basis.

just like PP&R does with entire westside waterfront basically all summer!

I agree. I can see OMSI closing Springwater for bikes or non-customers/residents. Already there’s no public easement for the section just north of the OMSI main building, up to where that chain link fence with the gate is. And AFAIK, there is no plan to ask OMSI to dedicate an easement through there as part of this master plan. There should be. We should ask the city to get that easement.

OMSI is also served by buses that cross the Tilikum and Hawthorne bridges.