Mt. Tabor Park is a gem of southeast Portland. But if you live south of the park you’re all but shutout from easy access. Now the parks bureau is zeroing in on a design for a new public access point from SE Division Street at 64th that will include a bike path.

Finally the South Tabor neighborhood will have convenient access to its namesake park.


City plans as far back as 2000 have included a southern access point for Mt. Tabor Park, but it wasn’t considered as a reality until neighborhood activists began to organize in 2014. As we reported last year, the Parks Bureau now plans to build the path next year as part of their larger Mt. Tabor Yard project to repair and replace their maintenance yard facility situated on the southwestern corner of the park.

The new path will connect SE 64th Avenue between Division (where it now t-bones into the park) and SE Lincoln Street. It will be lined with lighted bollards and landscaping. You can see the latest concept drawing in a presentation by Opsis, the architecture firm working on the project.

On Tuesday (10/24) the city is hosting an open house on the project where they’ll share detailed design drawings of the new path and seek your feedback on how to make it better. The event will be at Warner Pacific College (2219 SE 68th, Egtvedt Hall 203) from 6:00 to 8:00 pm. Check the listing on our calendar or see the flyer below: 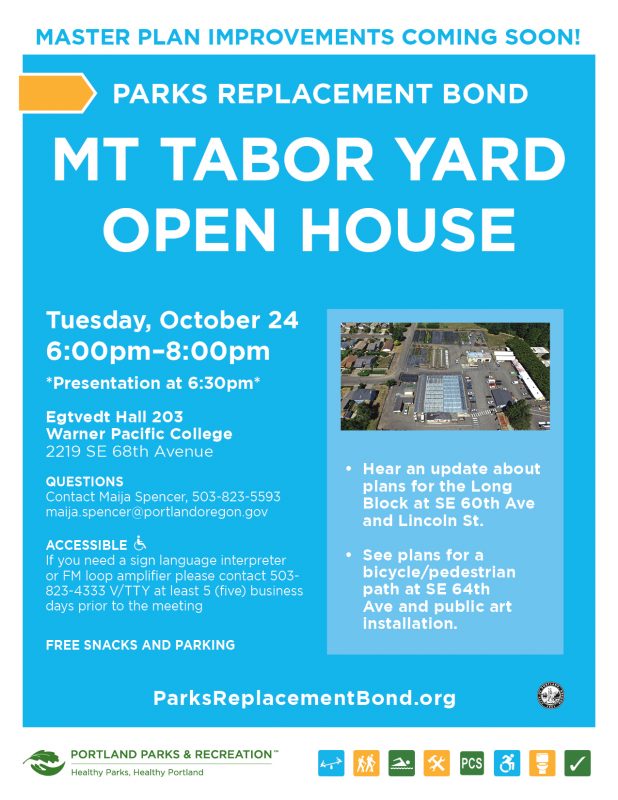 Sick. Now some better access to Kelly Butte would be cool.

Will this include crossing improvements at 64th? There is currently not even a marked crosswalk there, let alone a signalized crossing. This path will be essentially useless if one must play Frogger to get from the neighborhood across Division to the path!

Yes, it will include a crossing at 64th & Division, though it’s technically a separate TriMet project. They should be constructed around the same timeframe.

Yes, a flashing beacon crossing is part of the project, PBOT funded. This is also part of the 60s Bikeway, a regional neighborhood priority.

Just rode the presumptive 60s neighborhood greenway today, from division down past Woodstock, and it works pretty dang well right now. City won’t have to spend too much to make it a top notch Bikeway.

southern residents such as myself can enter via 68th, but it’s through the off-leash dog park section… so you have to dodge dogs and their land mines…

It’s also a heluva steep climb from Division to even the first stretch of road on Tabor.

Will never get trails in Portland =(

Never mind. I get it now.

Come out to support access to our park. My understanding earlier was that the neighbors were agin’it and might mount some opposition.

What is their reason for concern? Looks like the path will parallel a public street and be across that street from the nearest houses. Are they worried the path will become a homeless camping haven like 205 MUP?

I’ve never not known residents to be against putting a footpath in adjacent to/behind their houses. (except maybe in cases where it starts and ends behind the gates of their community)

Laura’s point below about the it functioning as an essentially private, public space for the people in the development is a good one.

I wonder if some of the resistance to new bike paths is residents not having confidence in the city’s ability or motivation to prevent them from becoming overrun with camping like the I-205 or Springwater paths.

No need to wonder John. That’s a fact. Remember back in March when resistance from local residents fueled by crime and homeless camping concerns resulted in Metro giving up on a path project?

Oh, I’d forgotten about that.

A few weeks ago I was riding on the I-205 path, where it runs next to houses, which means the people living in those houses now have a semi permanent homeless camp next door. I thought that if they had known that the day would come when this city couldn’t or wouldn’t control what happens on its bike paths, they never would have moved or bought there. I have friends who live across the street from a public park where there was nearly constant camping in tents, cars, RVs for nearly three years. They wished they hadn’t moved there, and one is selling and leaving.

There is some opposition to reclaiming “The Long Block” for nursery use, which it was until a few years ago. The proposed use may be a bit more intensive that it had been. The area has become an unofficial off-leash play area, neighborhood play/soccer field, etc. Some folks would like to see the community garden area expanded, as well.

Looks like a nice link north/south through that area, too. A real improvement on the very tight 60th Ave.

Is it actually a multi-use path or will cars also be allowed?

Chris I
Reply to  Andrew Kreps

Cars will only be permitted for urban campers.

This will be nice. If memory serves, there used to be a path along the Tabor Yard many years ago, and it was wiped out at some point.