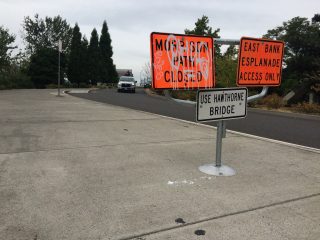 “There is a one-week delay in pouring the last concrete for the new deck, due to some additional work they discovered this week,” he said.

At last count, the bridge has carried about 800 bike trips per day since opening its sidepath in 2012 after a 12-year citizen-led activism campaign.

This entire project was unnecessary. There were a few crashes because people were driving too fast on the steel grating when it was wet. They should have dropped in jersey barriers to prevent head-on crashes and kept the old steel deck. Tens of millions wasted…

maccoinnich
Reply to  Chris I

In order for the Morrison Bridge to open the operable portion needs to weigh the same as the counterweights (which are in the piers). If Jersey barriers were added then the bridge would no longer open.

Chris I
Reply to  maccoinnich

They have built a barrier protecting the bike lane on the south side. Could the same barrier be used to separate the east and westbound lanes?

maccoinnich
Reply to  Chris I

That’s a good question that I don’t know the answer to. Looking at streetview, I see that they changed from concrete to steel at the operable portions of the bridge, presumably to minimize weight. I don’t know how much more weight they could add before it would be a problem.

X
Reply to  Chris I

Bridge decks are like bikes. If you want it to last, steel is superior to fiber-reinforced polymer.

Sad to see the detour signs have graffiti already.

Anyone know when work starts on Burnside bridge? Was supposed to be after Morrison was done?

Has anyone else been ignoring the signs and riding or walking across? I’ve done this a few times (not bragging – – was just desperate and late, and didn’t want to bike or walk all the way down to one of the other bridges to get to something right on the other end of the Morrison). There was nothing blocking the path, nothing wrong or dismantled – – did they close the path just because they wanted parking and a place for the port-a-potty?

I did it once because the signs just said “sidewalk” closed, not “bike path” closed, and I thought there would be a valid route. Traveling from west to east, I found that just before the corkscrew, there were several sections of chainlink fence secured across the path with padlocks that made the bike path and sidewalk 100% impassible. I had to take the lane to ride down to Water St.

Wow! They must have done that to thwart the cheaters. There were quite a few people walking and biking across the bridge when I went. Could you see if there was any real reason for the path and sidewalk to be closed?

This has really been a tough year for people crossing the river, with Broadway, Burnside and Morrison Bridges all being worked on. No surprise the traffic on Hawthorne Bridge has been bad.

Next year will be a lot better. I think.