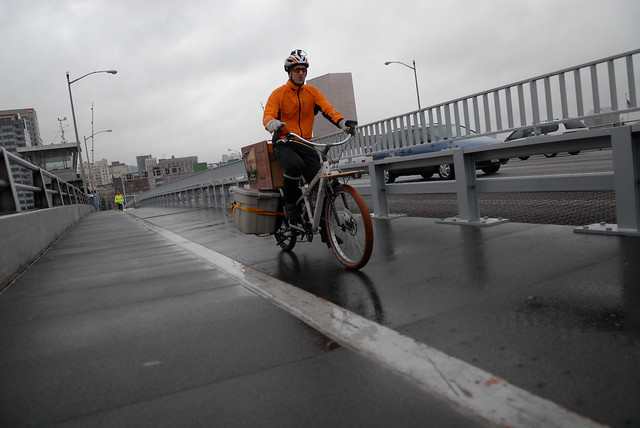 Ahh – can you feel that? That’s a successful
postcard campaign from 15 years ago.
(Photo: J.Maus/BikePortland)

There’s nothing new under the sun, but effective political tactics have a way of staying effective.

That’s what reader and legendary bike advocate Phil Goff observed this week in a comment beneath Tuesday’s post about a series of postcard campaigns by activist group Bike Loud PDX:

This is exactly what I did 15-16 years ago to create the political pressure to bring in funding for the Morrison Bridge sidepath project. On two occasions, I had 300-400 signed postcards mailed to Multnomah County Chair Bev Stein (to get the County’s attention) and then 6 mo later to Metro Council chair Rod Monroe during the MTIP process. In the age of e-mail, Twitter and FB, a simple postcard campaign can pack a lot of punch. Its great to hear that advocates are reviving the tactic for other projects. Good luck BikeLoudPDX!

If you’ve never heard the story of Goff’s 12-year campaign to turn what was a temporary construction detour into a permanent, comfortable route over the Morrison between the heart of downtown and the central eastside, you can read Goff’s account of it in this 2010 guest post. It’s a great rainy-week reminder that if you keep at it, the sun always breaks through the clouds eventually.

— Barring any breaking news, Jonathan and I are signing off for the weekend. Thanks for another great week of comments — all 900 or so of them!

Any inkling of traffic calming and bike lanes for Sandy?

Indeed! I may send in one on my own and talk to others about the idea.

If ever a street needed it, it’s Sandy. It may be the next best thing till we get something like Sullivan’s gulch…if that ever happens.

We lost a great advocate and visionary when Phil moved back east. His plan for the Central Eastside with the Eastbank freeway gone is awesome.