When did you start riding?
I grew up in Gresham on a country road without shoulders. It was in the 1940s, and it was not deemed safe for a girl to have a bike and ride them on those roads. There were three of us girls in the family, and none of us had an opportunity to have a bike; after I left home, my brother got one, though. So I never rode a bike until I started working on Gateway Green.

What got you started?

You get a lot farther by trying to come up with answers than trying to demand things.”

The whole idea for Gateway Green came out of the Urban Renewal Area (URA). We were looking for a reason for people to come to Gateway that was different. Ted [Gilbert] saw it and thought we could make a park of some kind.

When we started working on Gateway Green, we didn’t even think of it as a bike park. But we started talking with folks, and ODOT said they had heard that others wanted something for bikes in that space. We hosted a visioning thing in 2008, and the result was planning for bikes. At the time, the City was doing a feasibility study for a Sullivan’s Gulch multi-use path, which would make Gateway Green a north/south, east/west nexus.

Why and how did you learn to ride a bike?
The more I looked around, there were all these bicycle riders involved in the project. I realized that there would be this opening ceremony for Gateway Green, and everyone else would be swinging in on bicycles, and I would be lumbering in on my feet.

So I took a senior biking class at Portland Parks & Recreation. They have a small fleet of eight recumbent trikes. You have to be 55 years or older to join the class. So I did that class from May to October. I learned how to use the gears and hand brakes and the basics of riding a bike without worrying about falling off. There are a lot of people who take that class after knee surgery and use it as part of their rehabilitation. It’s also led by older folks, so that was fun.

Then I thought that I’d buy one. But the trick is that I knew I wasn’t going to ride from my house, because I live on Halsey, and I couldn’t find a rack that you could put it on.

My husband had a bike in the garage. I rode it down the block and didn’t fall off, so I bought a bike a few weeks later. Now I ride every week, weather permitting. But I still won’t ride in the streets unless I’m in a group. I’m really looking forward to the buffered bike lane on Halsey and the 130s neighborhood greenway. I could even ride to the [East Portland Neighborhood Office] once the buffered bike lane is in. I would do a lot of stuff when I have a safer way to do it.

My husband said that when you learn to bike later in life, you don’t have the same sense of the road. There’s a whole class of “interested but concerned” riders that I’m in. Because my reflexes aren’t the same as they used to be. 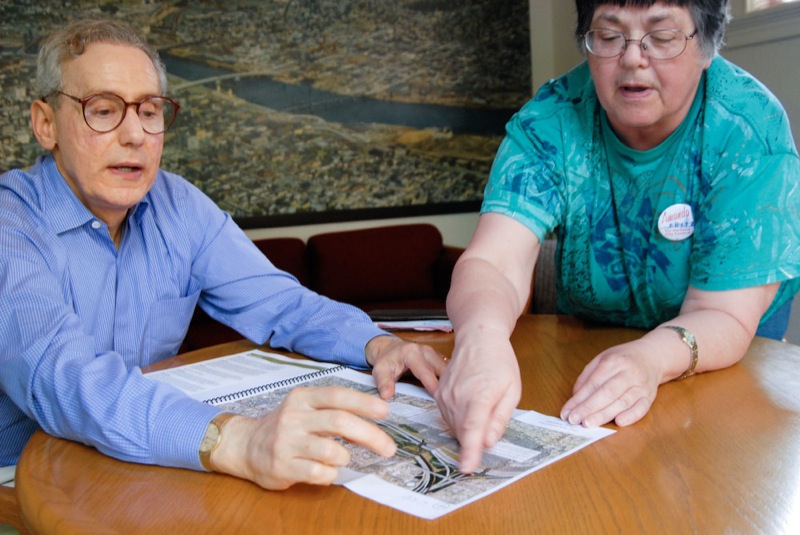 Linda with Ted Gilbert in 2008, showing us their bold vision for Gateway Green.
(Photo: J. Maus/BikePortland)

Ever thought about mountain biking?
No, I have not. They keep telling me they’re going to put me on one. But at my age, the older you get, the longer it takes bones to heal. I might try the beginners’ trail at Gateway Green. Maybe if I have a fat tire bike. I really like watching other people do it.

How has Gateway Green changed your relationship with the city, as a citizen?

“I will probably never completely retire, because I’m a nosy busybody.”

I came up with a motto: “Patient persistence.” These things take time, but you also have to pay attention. You have to let things work their way through the process, and when it gets stuck, you need to start asking questions and asking the key people what the roadblock is and what it will take to move forward. You get a lot farther by trying to come up with answers than trying to demand things. Things are always more complicated than you think they are.

EPAP [East Portland Action Plan] has just been inspiring. People are learning to advocate for what we need. Just bitching doesn’t get you anything. We are working hard to get on advisory committees. Once it gets to the public comment period, a lot of decisions have already been made. I will probably never completely retire, because I’m a nosy busybody. But I’m hoping to create fewer processes where I’m organizing the committees.

What’s a dream you have for girls of Portland?
I read The Feminine Mystique when I started college. The whole idea of women having a choice in what they did with their life was an eye-opener for me. Women have way more opportunities now than I had in my dreams then. When I got my first telephone, someone had to sign for you. I was married, and my husband was on parole, so he couldn’t sign. And my father couldn’t sign. I had to get my work study professor to sign for me so I could have my own phone.

Who is your shero?
Pam Arden and Alice Blatt. There is a natural area named after her called Alice Springs. Alice is the one who first got me engaged in neighborhood volunteer efforts in East Portland — more than 30 years ago. She’s now 85 — and proud to let people know that. Pam is very active in North Portland and worked for so many years to get that Cross Peninsula Trail. The big limitation then was to get across the Columbia Slough. When they were redoing the sewage treatment plan, they had to lay a pipe across the slough and decided they could attach it to a bridge as the support. So that was the way to get the last link of that trail.

I’d like to see more places to ride to, and safer ways to ride there.

I had the pleasure of pedaling up the hill from Gateway Green to Gateway TC next to Linda in 80-degree weather early this summer. She had just delivered a speech about Gateway Green to a bunch of officials, some visiting from out of state, and on the way up to the next stop on our ride, her transmission started failing and she couldn’t get her bike’s chain into its slowest gear. So she pedaled up that hill on her mid-size gear, never complained once, and even kept talking to me a bit. This from someone who only started riding a bike in the last few years.

I was really impressed — and it was equally clear to me why Gateway Green had successfully gotten funded.

Linda is a shero in her own right! Thank you for your tireless advocacy and efforts to the benefit of our greater community, Linda.

Portland doesn’t work without nosy busybodies like Linda –she is definitely a shero to anybody who uses a park in East Portland.

Also I love the shout-out to Alice Blatt. She’s a gem!

Great interview. That answer about the signing for a telephone was a real eye-opener.

Will Gateway Green have a payphone in case an emergency takes place?

Good point, but most everyone has mobile phones now. Still…lots of vagrants in that area just waiting to take over the park.

Thanks for this great interview !!

Not only did she coin the motto “patient persistence”, she defines it.

Thank you for all of your hard work and perseverance Linda!

What a wonderful and inspiring person. Rolls up her sleeves, gives up her time, and gets things done. Thank you for this article.