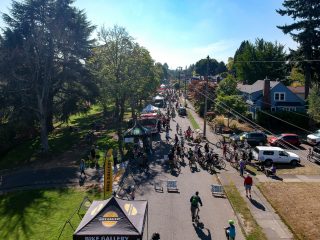 Jonathan’s enjoying Europe, so I wanted to revive the Weekend Open Threads and ask what bikey or outdoorsy things you did this weekend. I got out to Sunday Parkways- maybe the first one I’ve been able to attend this year. Parkways was well-attended; I suspect that’s because people are feeling the “end of summer” pressure.

One highlight of the event was a person I met while stopped for coffee in Milwaukie. He was admiring my classic Raleigh, so we talked a bit. He is from Southern California and came to Portland for a weeklong conference. Now that the conference is over, he is riding to Eugene and will take the train back home from there. He felt embarrassed for carrying so much gear (front and rear panniers), but he had “nice clothes” for the conference and all of the wet-weather gear he might need for riding. I’m sure he’ll enjoy the ride.

Some of my random observations:

So, did you attend Parkways? Go racing? Run errands? Share your weekend adventures in the comments. Email pictures to be placed in this post, or submit a subscriber post. Also feel free to share thoughts on the bike news of the week, or stuff you think we should cover next week.

“Milwaukie”, unless you are referring to a special 2,000+ mile Sunday Parkways ride.

Thanks. I hate getting that wrong. The URL will still be typo’d but the text has been fixed.

B. Carfree
Reply to  Bob R.

A fellow can dream, can’t he?

Cool photos and videos Ted! Thanks for posting this. I’m in the town of Bayeux in western France near the beaches of D-Day. Miss you!

Interesting observation about cars with bikes on them. In my experience, these motorists pretty much drive like everyone else. People are people.

Needing to be in the woods amid some greenery, I rode the Gales Creek Trail for the first time in a long time. The new trail reroutes were fantastic. After the first few miles the hikers disappeared and I had the trail to myself. Not sure why I waited so long to ride this Coastal Range gem.

This past weekend was mostly a lazy, stay-at-home affair. We did manage a 6-mile purse-run on Saturday from St. Johns to Queen Bee Creations on Williams. Keri’s much-loved QBC waxed-canvas bag suffered badly when a ball-point pen failed and dumped all its ink, staining through to the outside of the bag. After numerous attempts to clean it, she finally gave up and bought a new one. We followed up with dinner at the Hopworks BikeBar next door and meandering the 6-miles back home. A pleasant evening in all.

Took our heavy tandem out for a weekend ride as part or our program to get my wife, who is not a bike person, more exercise. She is slowly getting the hang of it, and we are making progress in both mileage , hills and smoothness. On Saturday she had something of a cycling breakthrough and the endorphines took over and she called for more as we neared the end of our planned hilly 10 mile route, so we took an additional loop and rode for a record ( for us on the heavy “picnic bike”) 13.5 miles. It is interesting to see the extra courtesy we are afforded riding a tandem on the weekend compared to the indifference and aggression many of face riding normal bikes during rush hour. We crossed MLK twice during our ride and in both cases, both lanes in both directions stopped immediately to let us cross.

My family got out for what may be one of our last Sunday bike picnic dinners. About a 10 mile round trip through SW suburbs to the grocery store, park and back home. This maybe wouldn’t warrant mention in other parts of town but each time we travel even a modest 10 miles in car dominant Beaverton I can’t help notice how out of place we are.

My wife was able to join us for Sunday Parkways thanks to a folding electric bike and being able to drive to the start for an entirely car-free ride. She enjoyed it much more than either of us expected — who knew “interested but concerned” is mostly about fear of cars? (Oh right, PBOT knew.)

I wish they wouldn’t make so much concession to car traffic on and around the routes. Everybody “just needs” to drive their car to somewhere and most won’t be bothered to plan a route around the closure. If some of those people ever had to try to plan a bike route to get around streets with fast, heavy car traffic…

The attended, but signalized intersections were awkward (like the HAWK on Tacoma, crossing 99E.) Why are traffic control people standing there if we’re just going to follow the lights? Thinking they were overriding the signal, I rode past one flagger after the signal turned “don’t walk”, the flagger on the other side started waving for me to stop. Turns out they are standing there just to push the beg button over and over again, but I guess I expected to get some direction from the traffic directors.

Interestingly, the 99E crossing had a Leading Pedestrian Interval, with flaggers waving cyclists through in the extended walk phase. It would be cool to have “bikes use ped signal” signs for these the rest of the year.