How did you get started in biking?
I didn’t get into biking seriously until Bike Farm and then not seriously myself until my bike tour. And then I never looked back.


Where was your bike tour?
It was through Amsterdam, Italy, and France. I took some trains in between. I had never fixed a flat until that time. I got into situations where I slept in train stations or got kicked off trains. It was such a different experience about how to travel.

I remember one time, I arrived in Venice before anything was open, and I decided to ride to the highest point I could see and look at the city. It’s just something I never would have done another way, like on a bus. It was the little things, like getting a soda on the side of the street. Things that you don’t experience in other ways.

I’ve never been a physically fit or athletic person at all. So the idea of biking the 80 miles was ridiculous to me. But there’s nothing more motivating than biking through the countryside of Italy. It’s something I never would have done myself in my own city or my hometown. I would never sweat that hard. But I was amazed at how far I could go on my bicycle. It was the best motivator.

How did you get started with Bike Farm?
I came into Bike Farm as the analyst, which is still my title. I was there to find real estate space, to create the nonprofit forms, and go through legal documentation. I still remember the first meeting where I was supposed to say something about a bike part, and I almost mistakenly said, “steering wheel”. Folks surely thought I was stupid.

But I knew a budget. I knew how important it was to have financial stability for a new nonprofit organization. I knew that you need to know where your money is coming from and that you have to charge for certain services, even while making it accessible to people.

Safer space is obviously important at Bike Farm. How did you work to create a welcoming space?
It was all founded by women. All the founding board members were women. The logo was designed by a woman. The website was designed by a woman. Besides that, we have regular trainings about de-escalation, how to hold a safer space, and nonviolent communication. This happens every six months or when other issues arise. We also call each other out. We are up front about it and call out specific behaviors that we are trying to avoid, or others that we are trying to promote. We have a lot of discussion around it.

It’s suggested that volunteers wear a name tag or a hat that is pink to identify the volunteers. Some of our shop nights still tend to be all men. It would be nice to get more women on those days. I’d say [Bike Farm’s participants] are 30% gender non-conforming and women and 70% male.

How do you call people out?
I say “Hey, can I talk to you about that interaction really quick? I saw that you were hovering over that woman, and taking the tool from her. We should really try to avoid doing that. That’s not what Bike Farm is about.”

We get some visitors who are aggressive in their behavior or violent in their words. We have to impress that, even if the volunteer feels comfortable, it can create a toxic environment for others. 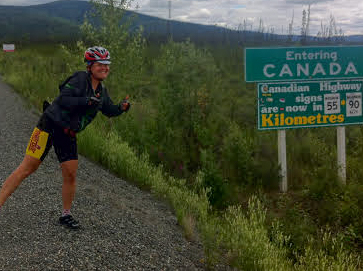 What’s next for you?
I’d like to get involved in transportation at a higher level, at the planning level. I’m particularly interested smart city technologies. That’s what I’ve been fascinated with. I have been listening to a lot of talks about where other cities are going with their technologies.

I’m curious where Portland will go. I hope that it will be thoughtful about who will have access to that data and how it will be used. I’m a software developer and recently worked for a company that worked with Bluetooth and other wireless protocols.

What is a dream you have for women in cycling?
I want that someday we don’t have to have these conversations. I want it to be a non-issue. Logically, I don’t understand why there is this issue. I do understand how we learn in society how women should present themselves. It’s just a whole lot different for women to be sweaty than men. It’s such a deep expectation. Women value how they are perceived as beautiful by someone else. Not all women, of course. But I do.

I’ve been trying to think of a list of things that bike shops could do or never do, like:

➤ Never assume someone’s gender. “They” is very easy to use.
➤ If they are over 18 years old, don’t call them “girl”.
➤ There’s an assumption that some “girl” doesn’t want to get dirty. And that might be true, but it might not be.
➤ Ask them what they need. At Bike Farm, we ask how people like to learn. Do they like to be left alone, to be checked up on, or to be shown how to do something and then redo themselves?
➤ Pay attention to what music you’re playing. Try to include many voices.
➤ Greeting people is very important and having that welcoming.

When you ask questions, people get excited about the possibilities. I think that’s the big takeaway. Just let them do it at their pace.

Who are your sheroes?
I love Elly Blue (author and publisher) and Laura Crawford (recently named U.S. Bicycle Route System Coordinator for Adventure Cycling). I think what they’ve done is amazing. Sometimes I just want to live their lives. I’m also part of Portland Society, which is a group of women who are professional women who also love bikes. I love all the people who go to those meetings. It’s so inspiring to hear what women are doing. I really appreciate the bragging about ourselves and sharing.

It’s the women who are building resources. We just need more women to go out and build more resources so that everyone can use them.

I love this interview! Thanks to Steph and Momoko!

All the awesomeness. Thanks for the motivation tips!

Completing a task always makes me feel more empowered. You can’t feel that if someone completes it for you.

This interview is full of great advice, but this point in particular especially resonated with me.

These two leaders (Steph and Momoko) make my Portland a better place for all.

“At Bike Farm, we ask how people like to learn. Do they like to be left alone, to be checked up on, or to be shown how to do something and then redo themselves?”

Having the right style of help when you’re learning something can mean the difference between falling in love with the process or walking away feeling totally frustrated and incompetent – I love that this is something they pay attention to.

So much to love in this article! And another thing to love – Momoko is co-chair of PBOT’s Bureau and Budget Advisory Committee. Great to have her wisdom helping to guide the City’s transportation priorities.

Thanks, Steph, for the incisive interview.

So cool. A bunch of my heroes in here.

It also speaks volumes about what failures the modern progressive man is if these women feel the need to create these cycling safe spaces.

Nah, I think it’s because of our patriarchal society, of which some women are complicit…I’m talking to you Ivanka!

I helped start a bike non-profit and sat on the board as the only woman for a long time. They blocked me from leadership roles and kept me from important decision-making. They wanted to bring a female on the board who they “thought was cute.” When I tried to volunteer in the bike shop, they made me sweep the floor and didn’t try to help me learn about bike repair like they did all the men there.. Needless to say, I am glad to see there are female-centric bike organizations.

it is interesting that the example of sexism given is related to sport cycling. i have long believed that transportation cycling is less likely to cater to stereotypes that focus on performance, risk-taking, and male chauvinism. perhaps if we had more transportation-oriented bike shops and fewer bike-shops oriented towards enthusiasts/recreational riders there would be less sexism and bias in the bicycle industry.

Would be interesting to assess the bike shops in Portland and see if there is actually any difference in this regard, between the different types of shops.