A carfree opportunity for SW Montgomery near PSU 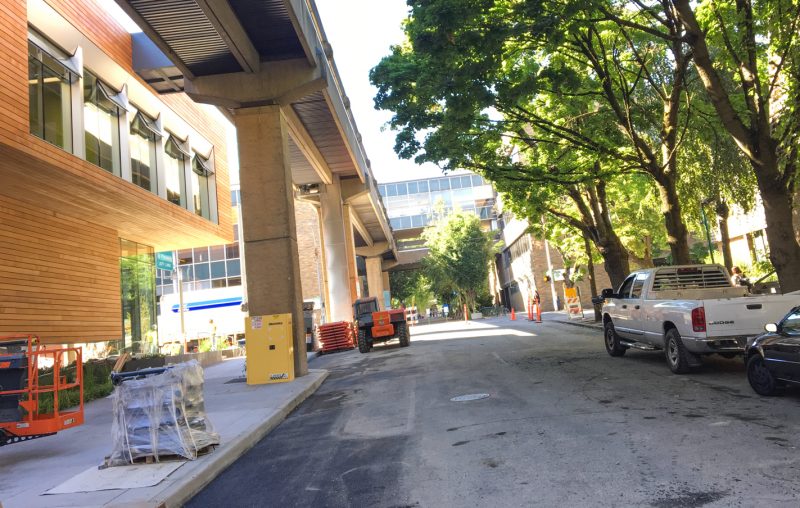 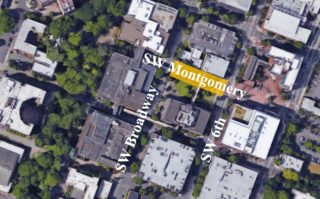 Yellow square is the block in question.

Next week Portland State University will officially re-open their business school after a major renovation of the Karl Miller Center on SW Montgomery between Broadway and 6th. The small street adjacent to it has been closed for nearly a year during construction and there’s an idea swirling around to keep it that way. Forever.

The blocks of Montgomery on both ends of this section adjacent to PSU’s business school are already carfree. To the west is the PSU Park Blocks — a designated “Clean air corridor” and “Pedestrian zone” that PSU proudly proclaims (via signs attached to bollards) as a “Space free of smoke, pollution, and emissions.” To the east is the PSU Urban Plaza, a legendary petri-dish of carfree urbanism bisected by the streetcar.

To Tim Davis, a Portland civic booster (his Facebook page is “PDXFan”) and author behind PlacesforEveryone.com, this is a golden opportunity to create more carfree space downtown. Last week he posted the idea to the Bike Loud PDX Facebook page.

“Everyone I’ve I talked to, from every conceivable walk of life, agrees that it would be ridiculous to see this block opened back up to cars,” he wrote. “This key block can (and must) provide the only pedestrian corridor between two already permanently car-free places… It’s literally the only potential east-west corridor of its type and access that this formerly “commuter” and increasingly urban campus will ever have.”

“The block would make a beautiful and natural extension of the business school and its dramatic new corner entrance, as well as a space for events and countless other activities that we can’t even dream of today. Just imagine the potential for placemaking, speeches, events, celebrations, etc. That fairly wide block provides 5000 square feet of space that can be used in limitless ways!” 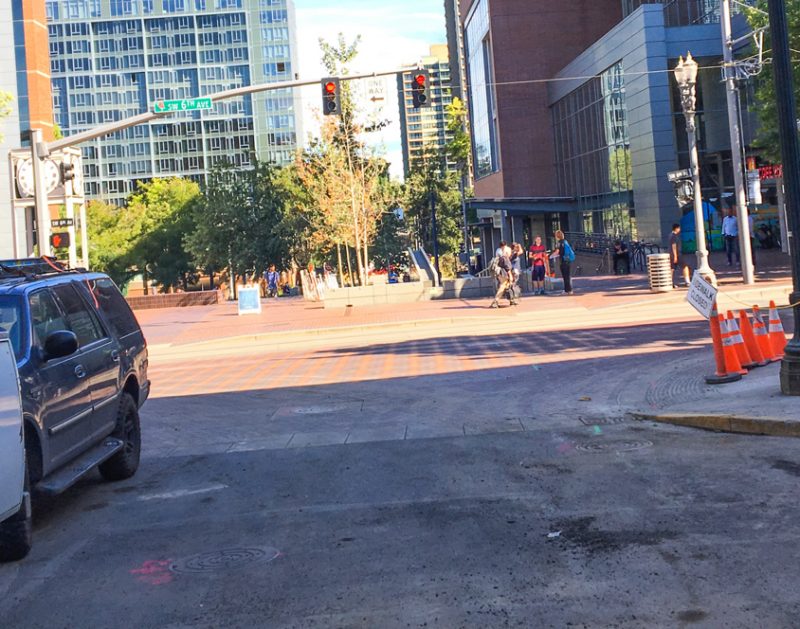 Looking east from SW Montgomery at SW 6th and the Urban Plaza. 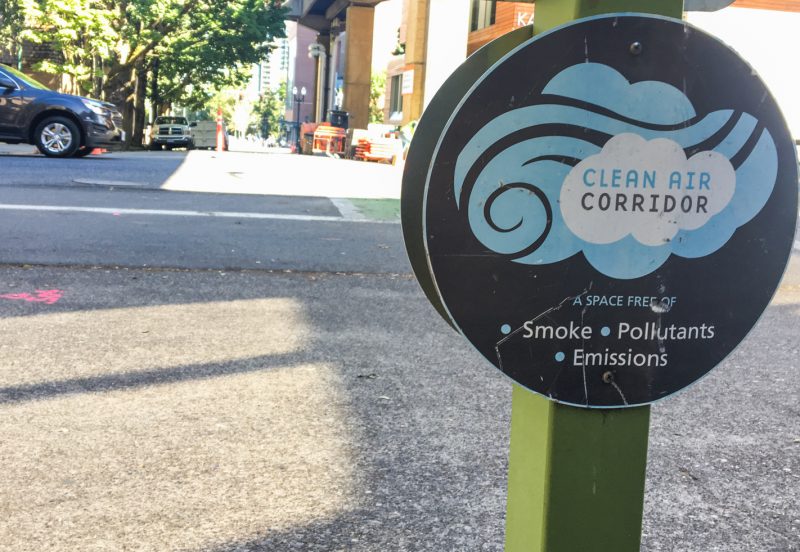 Davis says his exciting vision and all the potential that comes wit it would be “killed” if people were able to drive cars and trucks “right into the heart of campus”. He says this one block is “useless” for drivers and opening it back up to them, “is an enormous step backward toward 1950s car-centric thinking.” “Cycling has stagnated at PSU for several years,” Davis says, “and allowing cars on this one dead-end block that no one misses driving on is sending the wrong message.”

Unfortunately, we’ve just learned that the current plan is to re-open it to auto traffic.

A source explained to us that while the idea was considered, ultimately this block of Montgomery serves as access to a parking garage one block north on SW Mill and there were concerns about how its closure to cars would lead to more traffic on SW Harrison one block south.

But all hope isn’t lost. While the street will re-open to motorized vehicles next week, there might be a chance down the road to make it carfree.

“PSU features a number of car-free spaces, including the Urban Plaza, the South Park Blocks, and pedestrian paths. These spaces are an important part of an urban campus in a busy central city. We are open to, and enthusiastic about, new and creative ways to improve the pedestrian experience on campus. We’re supportive of the city’s efforts to provide new opportunities to make the most of our city streets through the Livable Street Strategy.

Right now, our primary focus is the completion of the Karl Miller Center prior to the start of the fall academic term. In the near-term, we’ll be conducting a study of circulation around campus. We’ll be looking at pedestrian travel throughout campus, as well as how projects like the Central City Multimodal Project and the Green Loop concept may be integrated. Montgomery Street will be part of this analysis.”

We’ll keep tabs on that circulation study and any opportunities to weigh in. Our quest for more carfree space downtown will continue! Stay tuned.

Oh No, might take another 5 sec to get to the parking garage if we don’t open it back up to traffic. We must not have that!

Time to remove those parking garages and reclaims the valuable land at the heart of PSU. A new garage could be built over I-405 (maybe some day I-5?) with bonds paid back by parking fees

They won’t be needed soon anyway. If tuition rates and student debt keep increasing at the current pace no one attending any college will be able to afford a car.

Closing this section of street off seems to be a good opportunity for a Better Block PDX experiment.

I’ve enjoyed the construction limiting private motor vehicle access, I use this route quite a bit.

A whole car free block? Fetch me my fainting couch!

Of course, this will be declared a “major” victory for alternative transportation thus placating the advocacy crowd for several months whilst allowing elected officials to further postpone real change because they threw bikes/peds this small bone.

Sadly, there are many such opportunities we are missing, and you really have to consider them in aggregate to realize what big opportunities they were. For instance, what if we also left Harrison closed to cars as it was following construction of the other wing of the building, and Mill closed to them as it was during the streetcar work? We’d then be getting really close to connecting all of the open spaces Boyle cites, and more broadly, we’d be starting to connect the Halprin Sequence with the Park Blocks. And a number of other PSU projects are already in the hopper…

Or look at Director Park. That area was closed to car traffic forever with no ill effects, then the block north of that finally developed and the same thing happened. Leave those closed, and you’ve got two developer-funded blocks of Green Loop (and other blocks along that segment under construction as well) before you even go before council to argue to have it in the TSP.

Sadly, our default position is still, “cars must be given access to as much street space as possible.” Lots of international cities are starting to reverse that paradigm, but not really American ones, and certainly not 2017 Portland.

Portland is famous for ignoring easy opportunities …then having a redo at an expense far higher than could have been.

Reduce it to one lane and add green space.

I don’t disagree. I do, however, believe that supporting things like this from a bicycle advocacy platform has the likelihood of creating needless blowback on the bike community.

This seems like a great idea to me. There are plenty of nearby streets for cars and so few for pedestrians only in this area of ever-increasing density.