If you care about bicycling in Portland and want to see its benefits spread across the social, racial and economic divisions that exist in this city, you should consider taking part in Sunday Parkways this weekend.

That’s because the Portland Bureau of Transportation has put together a brand new route that will highlight neighborhoods, commercial districts and parks east of I-205 and just south of I-84. This is a place about eight miles northeast of city hall that looks and feels much different than the central city. The streets are wider and people drive faster (and more people get hurt and killed on them as a result), there isn’t a bike shop on every corner, and you won’t find nearly as much bike-specific infrastructure. 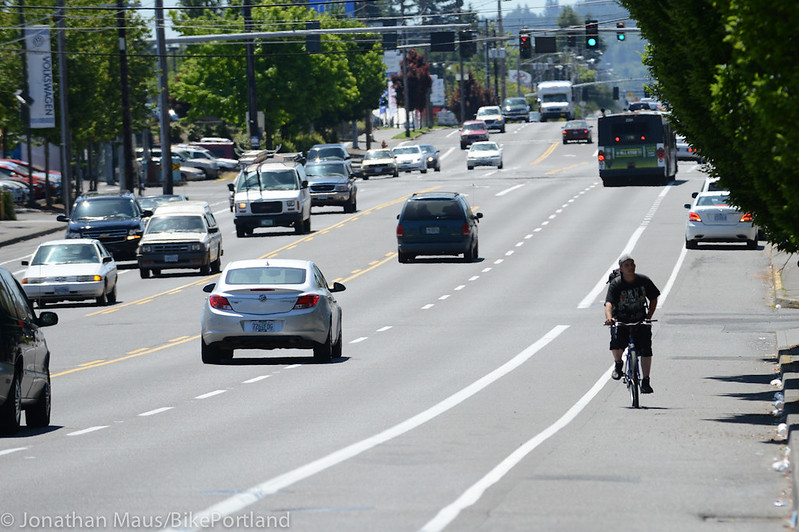 Times are changing in east Portland and PBOT has a goal of tripling the number of bike riders in this area in the next three years. As we reported back in February, Portland was one of 10 cities selected to be part of the “Big Jump” program run by national nonprofit People for Bikes. Dubbed “Gateway to Opportunity” the effort will center around the Halsey-Weidler couplet in the Gateway area and will be supplemented by a promise of “nearly $20 million” of investment in biking and walking infrastructure. PBOT says they’ll build around 39 miles of bikeways with that money and do it with the design and marketing expertise of People for Bikes — not to mention the $200,000 a year for three years that comes with the Big Jump grant.

But be advised: As we’ve seen in the past, bike-related infrastructure changes are not greeted with open arms by everyone. The small Mid County Memo newspaper reported last week on a “rift” has already formed between Gateway businesses and PBOT over plans to update to the Halsey-Weidler couplet. Hopefully Sunday Parkways will be an opportunity for people to discuss the project and get to know each other better.

For the protected bikeways on Halsey-Weidler to work, PBOT must first get people from surrounding neighborhoods onto them. This is where the new — and already funded — 130s neighborhood greenway comes in (see below). When built it will run north-south along the 130s between the existing I-84 path and the Springwater Corridor near Foster Road. You’ll be able to ride the 130s corridor on Sunday.

And while you’re out there, don’t miss these special happenings:

➤ PBOT is partnering with Portland Parks & Rec on a back-to-school drive. Bring your supplies to Knott Park between 11 am and 4 pm. They are looking for new or lightly used: backpacks, binders, notebooks, scissors, index cards, pens, pencils, erasers, and such.

➤ Stop by the Propel Gateway booth at Hazelwood HyrdoPark to learn more about their project to create a new identity for the Gateway District.

➤ The East Portland Action Plan and East Portland Neighborhood Office is hosting a walk with refugees and immigrants. This one-mile walk will take place from 11:00 to 2:00 pm and the first 300 children who show up will receive free school supplies. Meet at the EPAP office, 1017 NE 117th Ave. “This event plans to recognize the unique experiences of new Portlanders of all ages by honoring seniors and providing school supplies for children,” organizers say. “Come hear refugees and immigrants share their stories, music, food, and other activities will also be available to enjoy.”

➤ Parkways Putt Putt is the hot new thing. PBOT will have the course set up at East Holladay Park. Check out this story in the Willamette Week to learn more about it.

Good idea to have the route pass a MAX station. I may go and check this out, then.

NYC didn’t listen to “rifts”. They would have very little bike infrastructure if they had. Often these “rifts” are created by cheap media outlets in order to maintain an audience and sell their commercials.

Still no sidewalks in east portland but not sure that everyone there would want them. Saw the most aggressive drivers of any Sunday parkway. Fun to see the number of people on bicycles increase since Sunday Parkways began though. First year most people walked this year a ton of good looking bikes.

I agree. I volunteered for the first time and was surprised at what drivers said. They said things like “these people don’t even live here.” Also had a big truck drive through a large section of the route with a trump flag on a pole in the bed.
I was super happy to have the event out in my neighborhood but lots of residents were surprised by it. Not sure how to make the route better, but many of the stress parallel to I-84 have only a couple access points. Too many people had to drive more than a couple blocks.
Looking forward to volunteering again next year. Glad they came out to outer NE.

Honestly, I think these Parkways rides are too popular for cyclists to be billed as also a walking thing. I walked SE Parkways once with a stroller and gave up after a less than a mile. Just did not feel safe. It’s a bike ride. Also, I think the stops/booths should be created so that the booths are off the road or that there’s a way to choose not to stop. Either that, or make less stops. It’s nice to be able to stop whenever you want, but it’s annoying to have to stop a lot.