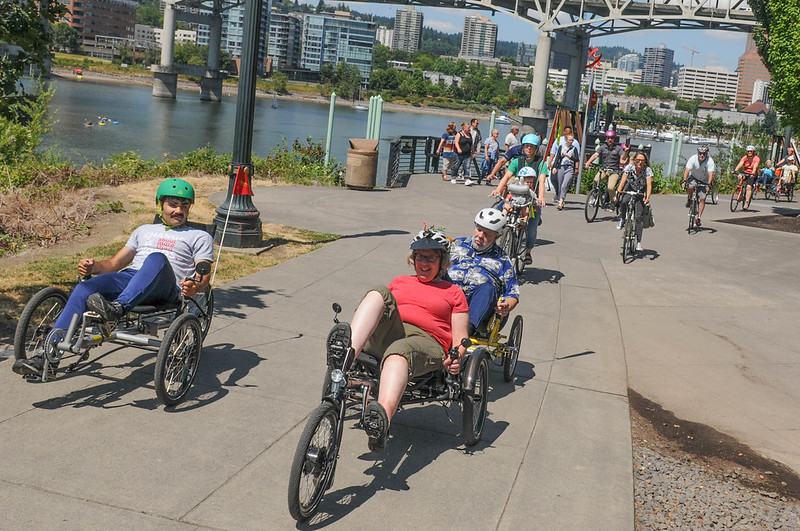 Portland now operates the nation’s first partnership between a private bike shop, a bike share system and a city government to provide access to adaptive bicycles.

Adaptive Biketown is the latest evolution of our bike share system. But more importantly, adaptive bikes and the people who ride them are now a part of our city, our bikeways, and our community in a way they weren’t before.

The true measure of a bike friendly city isn’t just how many people bike, but how welcome people feel when they want to give it a try.

What I realized being at the launch today is that this isn’t about access for people with disabilities. Yes, simply having these adaptive bikes available is the key. But this is really about acceptance. When a city has an official program for something it sends a signal that transcends the nuts-and-bolts details. In this case, Portland has just said: “Everyone with a disability who hasn’t been able to ride a bike for whatever reason, come on out and give it a try. We welcome you!”

Today adaptive bikes came out of the shadows. 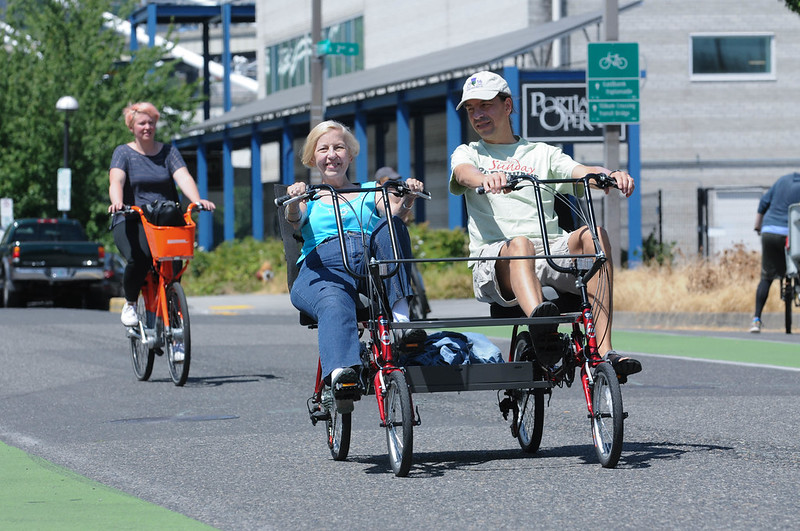 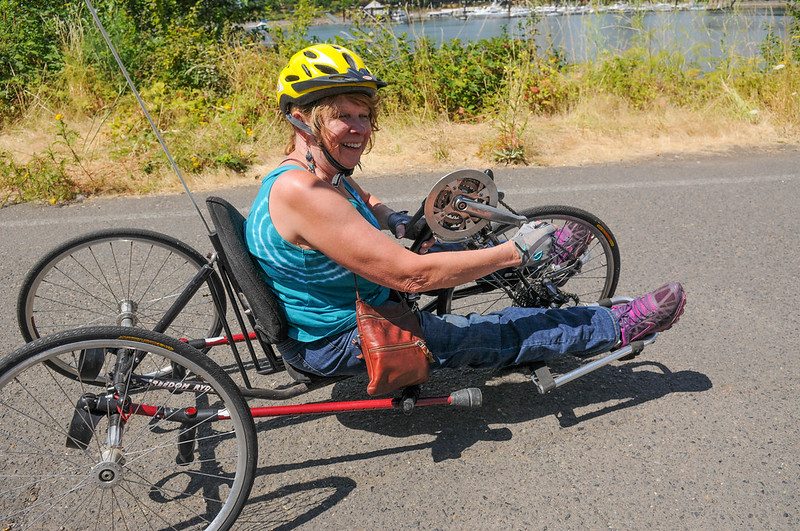 Barbara Dirks came out to support the program. 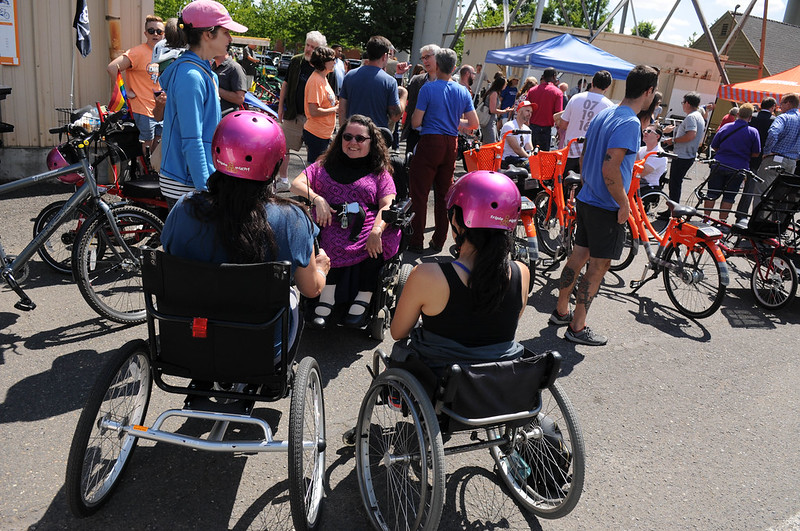 Think of all the people who will try these bikes and make new friends while doing so. All the new conversations that will happen. 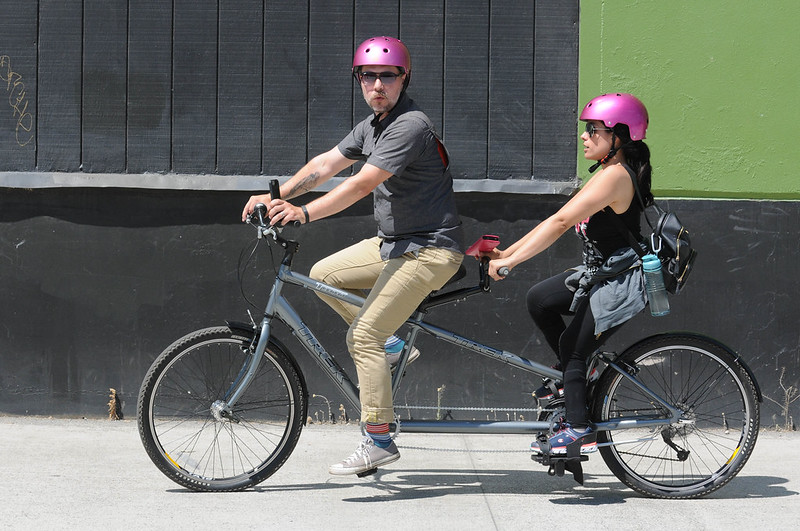 This is one of the tandems available through the program. 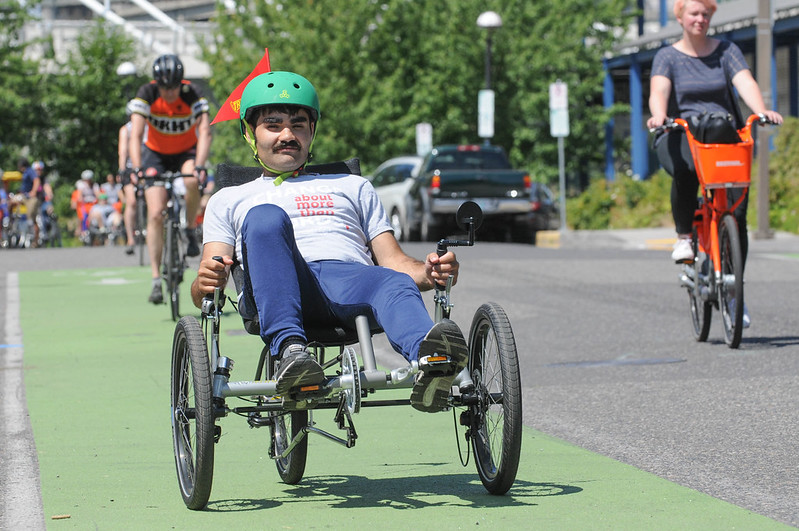 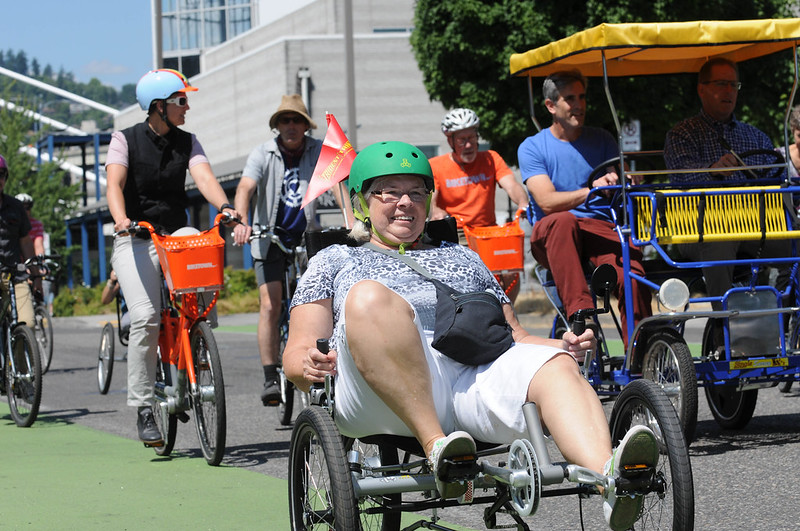 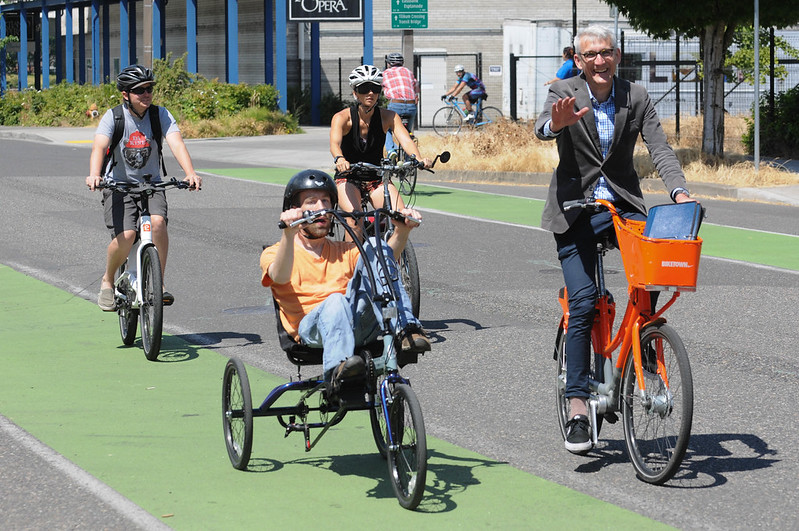 Julie Noel is owner of Different Spokes, a bike shop that’s partnering with the city on this program. She said it, “makes the disabled community more visible.” “They’re not an afterthought anymore, they’re not behind the scenes.”

“They’re not an afterthought anymore, they’re not behind the scenes.”
— Julie Noel, Different Spokes

The new Adaptive Biketown program will be operated as a rental service and will offer a mix of tandems, hand-cycles, and three-wheeled bikes. The program is open to people with disabilities, seniors, and those who qualify for a TriMet honored citizen pass. Those who want to rent one must register in advance and the cost is $5 per hour or three hours for $12. About 10 bikes will be available at Kerr Bikes located conveniently on the Eastbank Esplanade path just south of OMSI.

The program is being run as a pilot through this fall so that PBOT and its partners can evolve the offering as feedback and experience warrants. PBOT is funding the program to the tune of $30,000 (including $14,000 for 10 new bicycles). Biketown’s title sponsor Nike has also kicked in $10,000 for ongoing program costs.

We’ve come a very long way since one year ago when PBOT found themselves in hot water with disability rights advocates just one month before the launch of Biketown.

At today’s launch event, Jeremy Robbins, who broke his neck in a bike crash in 1999 and now uses a wheelchair, said he was excited when Biketown launched. “But then I noticed there were no provisions at all for people with disabilities. I was pretty hurt.” Robbins commended the City of Portland for listening and for giving people with disabilities the opportunity to ride.

Barbara Dirks showed up today on her hand-powered trike. She’s ridden one for years and doesn’t plan on using Adaptive Biketown herself, so she just came to show her support. Dirks is thrilled that there will be more people on bikes like hers on the paths. “Now I can tell my friends who want to try this that they can get a bike too.”

Sawyer Viola had never ridden a bike before today. He told me his mom made him come out and give a try. After his first spin (a short jaunt on the Esplanade), he gave me a thumbs-up and said he will definitely do it again. 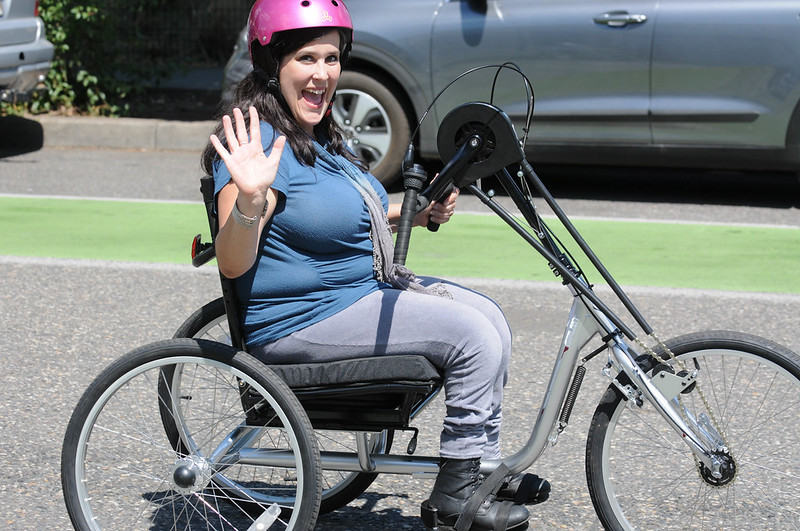 For Deidre Hall, today was a chance to rekindle a romance with cycling she put out decades ago. Hall, who uses a wheelchair to get around these days, said she had a trike as a little girl but hadn’t ridden anything since. Today she was all smiles on a new, three-wheeled Sun handcycle. “It’s so exciting to be on a bike and bike with other people. I missed biking so much!”

I would totally go ride a hand cycle at lunch as an arm workout – any chance these will be available to the general public?

no dan. that’s not how this works! These bikes are for people who need them. The whole point is to make more bikes accessible to more people who can’t use standard, two-wheeled bikes.

According to Adaptive Biketown’s website (http://adaptivebiketown.com/pricing), Adaptive Biketown is available to the general public. “Discounted rental rates are available to individuals who qualify for a TriMet Honored Citizens Pass (people with disabilities, Medicare recipients, and seniors age 65 and over). Individuals who do not have a card may rent these bikes, but the rates will be as defined below.”

We (city, taxpayers) are heavily subsidizing this fleet of adaptive bikes, and there are only ten of them, basically one or two of each type. I do not want to subsidize novelty rentals for people who are not disabled, nor do I want their arm workouts to prevent a rental to someone who actually needs a handlecycle.

But if they are not being used by a person with a disability, it makes sense for the bike to be on the road. This is how one leverages investment – use it as much as possible. Some of these may sit for days at a time, otherwise.

As a hypothetical example, suppose that over time it turns out that 10% of rentals are to disabled people who actually need adaptive cycles, and 90% are to people who don’t need an adaptive cycle but merely want to ride a trike as a novelty. That might suggest that the cost-benefit just isn’t enough to justify the expense.

Also, reservations by persons who are not disabled could make the adaptive cycles unavailable to disabled persons. Hopefully there is some sort of priority system.

This is fabulous, nice work everyone involved! Especially the disability advocates for speaking up and PBOT willing to listen. I hope this program excels and can become a model for the rest of the nation & world.

Yeh for PBOT and Nike for sponsoring this program!

Very proud of PBOT right now – thanks to Steve and all involved for making this happen.
It is more important to society than meets the eye.