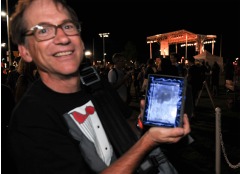 David Guettler, owner of River City Bicycles in Portland’s central eastside, was named Retailer of the Year by Bicycle Retailer and Industry News at an award ceremony last night following the first day of the Interbike trade show.

I bumped into an ecstatic Guettler at the Cross Vegas race shortly after the awards ceremony. Guettler has been in the bike industry for 31 years and says this is by far the biggest honor of his career. “I’m still floating from the awards ceremony… this is a big deal!” Guettler said being a part of the bike industry is such an honor because the bicycle is such a powerful force for good that can help solve so many of our world’s problems. “I think this is the most important industry in the world. To be selected by my peers… it’s just staggering.”