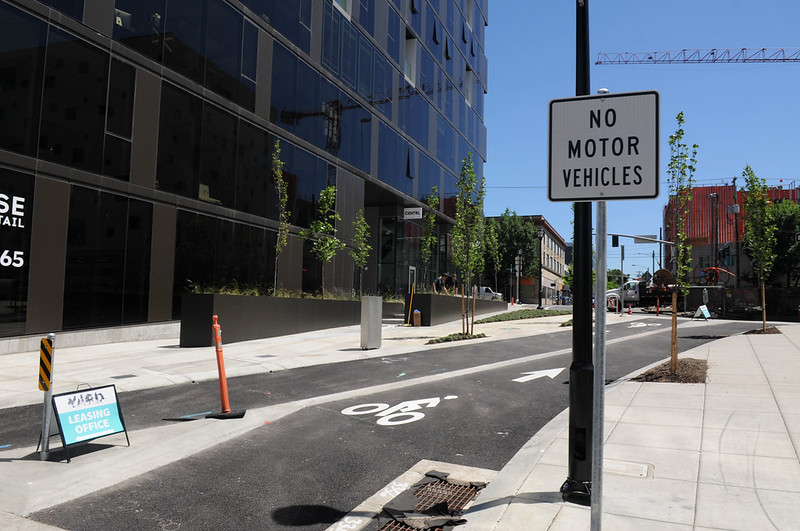 To improve circulation of vehicle traffic through a very fast-growing part of the central city, the Portland Bureau of Transportation decided to expand the road network. With two new lanes, people can now travel on a new road between NE 3rd Avenue and Couch Street.

Typically we’d be skeptical — possibly outraged — if PBOT added new lane-miles in the urban core; but in this case it’s fine because the new street is carfree. It’s the most efficient and humane way to utilize this important space adjacent to three new buildings that tower over the east end of the Burnside Bridge and have a combined 300 residential units and over 100,000 square feet of office and retail space.


Couch Court is only 130-feet long. It consists of a 14-foot wide, two-way bikeway and new sidewalks. As we reported a year ago, Couch Court was initially planned as a standard street where auto use would be allowed. Thankfully that plan was scrapped. It was likely determined by PBOT that squishing large and toxic vehicles on this short stretch wasn’t necessary. More importantly it would have been unsafe because of how the street intersects the existing raised bikeway on the infamous Couch Curve between Martin Luther King Jr. Blvd and westbound Burnside Bridge.

I got my first look at it yesterday. It seems to work well, except for the fact that a large truck had parked right at the access point from 3rd Avenue. As for design elements, it’s pretty straightforward. I really like the angle of the mountable curbs used throughout. One thing to watch for is whether or not this becomes a popular plaza — where people on foot wander into the bikeway. My advice is to slow down while passing through and ring your bell to let folks know you’re approaching.

Here are a few more images: 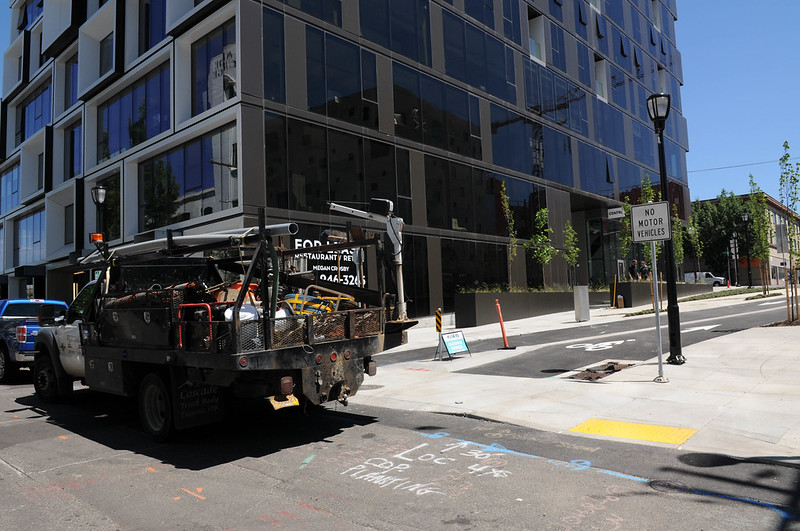 Come on man! Don’t park there! 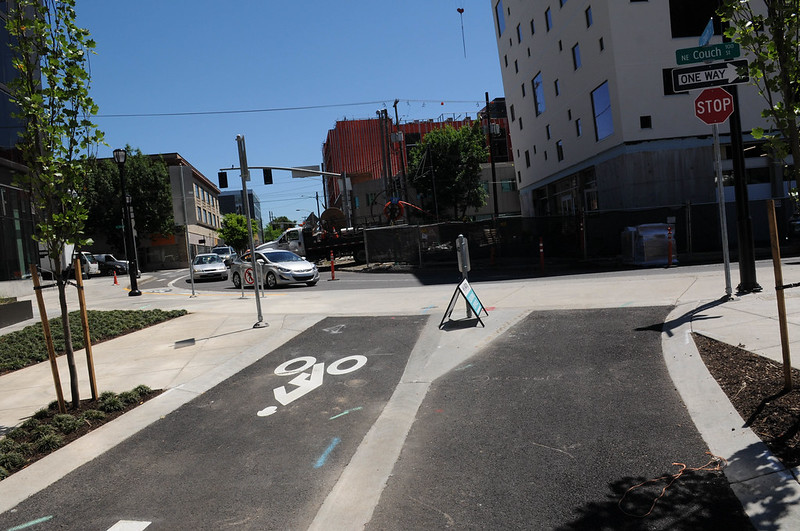 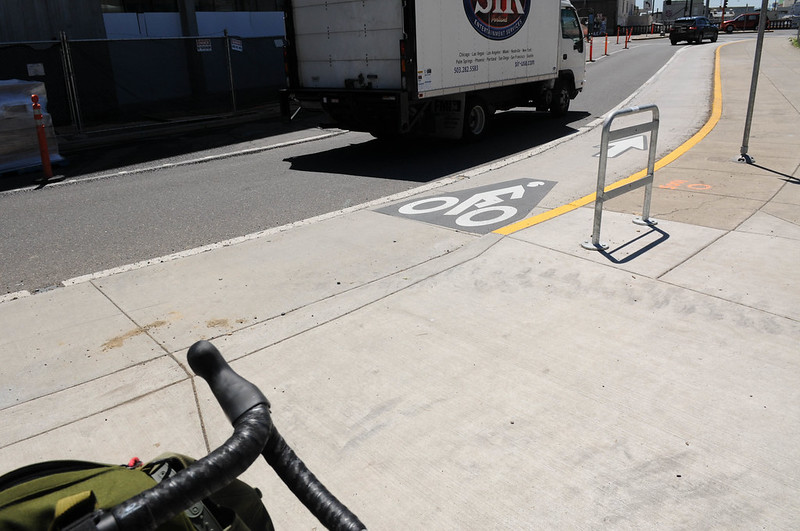 Where the new street intersects with raised bikeway on Couch. 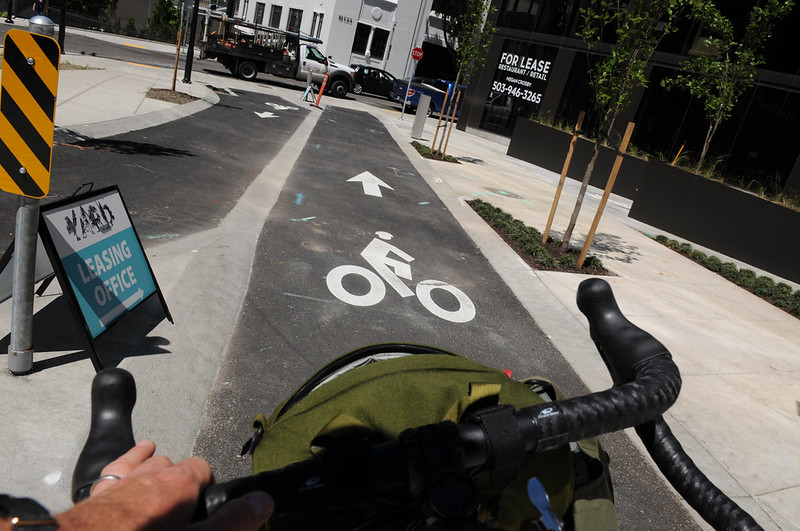 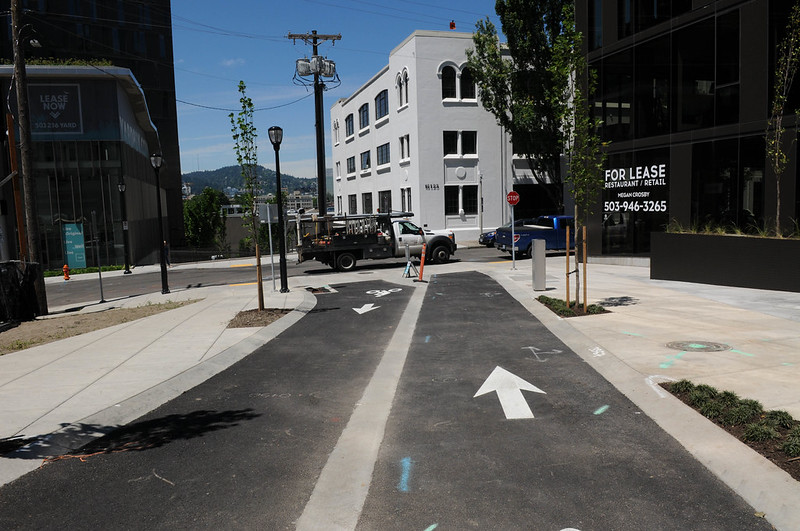 PBOT needs to add anti-parking signs and pavement markings to prevent this. 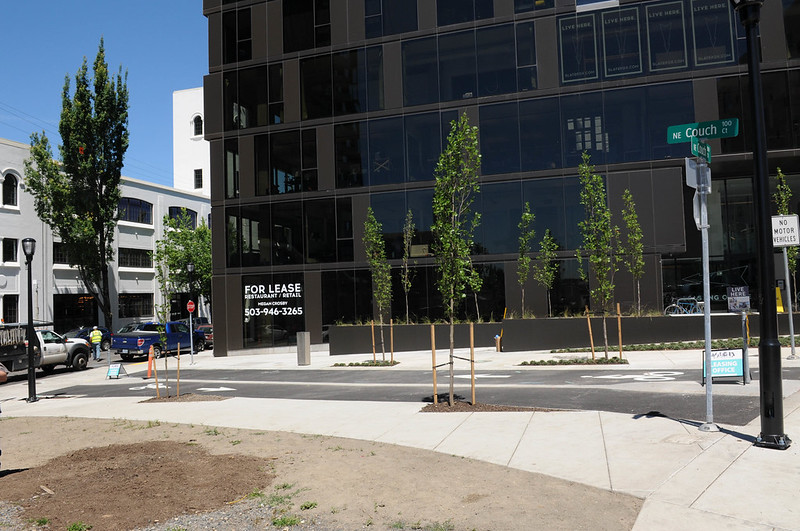 Couch Court is a nice addition to the bikeway network in this area; but it’s potential won’t be realized until there are more safe and convenient places to ride nearby (currently the Central Eastside industrial area, the MLK/Grand couplet and I-84 limit accessibility and make this a very high-stress place for bicycle users).

Do you ride in this area? Have you found this new stretch of bikeway useful?

I wished the city used this thinking with new developments in SW; some streets are proposed to be punched through for cars and many neighbors don’t want it. One will connect to a gravel road on SW 48th less than 900 feet from a public school.

Prediction for next post ( drum roll please) , photos from B.P. contributors of auto zombies driving their cars ( mistakenly of course) on this short stretch of bike and ped only infrastructure

Hard to do that if trucks keep illegally parking by the west entrance.

Not useful. I pass this everyday going north on 3rd to Davis, and have never seen anyone actually use it.

It would also be very helpful if they repaved the section of 3rd at the west end of this street, it’s still all torn up from age and all the new construction in the area; they made a saw cut weeks ago but have never followed up.

I have used this quite a few times. Typically I am coming from south and east, and I find taking Ankeny to 3rd safer that 6th to Couch. A signal at Ankeny would be very helpful! There is also a LOT of new traffic on 3rd heading north to Davis- I think Davis and 3rd could use some traffic enforcement.

There are (funded) signals planned at Ankeny/MLK and Ankeny/11th. With the new signal at MLK it will make it lot easier to continue on Ankeny all the way to 3rd, making this new street very useful for accessing the bridge.

I hear the signal at Ankeny/MLK may be happening very soon, built by a developer, and will not have to wait for the federal grant.

I hoped some adjustment time would change my mind, but to me the aesthetics of those new high-rise buildings are just awful.

Huh, call me crazy, and I know a lot of people hate it, but I don’t mind the Yards at all. I’m not too sure about the “fair haired dumbbell,” but I’m taking a wait and see attitude.

One look at the new buildings in Seattle will convince anyone it is arcitechtural amateur hour here in Portland.

Before the crash, the City had contracted with and out-of-state developer to develop the whole bridgehead with multiple buildings in a single, vanilla style. You may not love each (or any) building built here, but I submit that this much more organic development and much more in keeping with Portland’s style than what we narrowly avoided.

I remember the previous plan, which would have been anchored by a Home Depot. I am not sure why the only choices should be bland corporatism or an organic collection of misfires.

Why not an organic collection of interesting and attractive buildings that entice people across the river?

Hello Kitty,
have you taken the time to walk around this new development or walk through any of the new buildings. I work just a few blocks from here, and I walk through here at lunch nearly every day. While I do not love aspect of each building, I find that they each have many admirable qualities. They each have responded to a very tough location in creative, aspirational ways and each have many successful features. This may not be an unqualified success, but I believe it is a success by most measures and it is a far cry from your characterization of this neighborhood as a collection of misfires.

I haven’t spent much time close to the buildings; my comments are on how the appear from afar, which, given their prominent location, is unfortunate. A good building, in my opinion, should look effortless.

I will try to get over there and walk around a little and see if that adjusts my attitude.

Symbolically excellent. Let’s see how well it functions in practice.

I would like to see Portland look into extending 3rd Ave to the North: there is a great opportunity to connect the future Sullivan’s Gulch Trail and start the NP Greenway by crossing under I-84 and over the RR ROW landing on the curve of LLoyd Blvd.

Re: Cost. Asphalt is significantly cheaper than concrete per square foot, in the short term.

The asphalt better matches the adjacent building, which is also the color of tar.

They poured the concrete first, then the asphalt. They did remove a stripe of asphalt down the center and replace it with concrete.

That right turn from the bikeway onto the bike path to cross the bridge isn’t for the faint of heart with vehicles coming directly at you then turning at last moment. (See above video of that bus approaching)

BradWagon, I rode this last night to get to downtown. I think it works pretty well, but the transitions at either end are pretty tight radii. And it IS pretty unnerving to merge with traffic that is flying around the corner. PBOT’s latest fix (adding the raised concrete bike lane) plus the development has slowed down the cars quite a bit, though.

Isn’t there a condo near the marquam bridge that put up a gate to get people to stop biking through because one person living there complained a whole lot about the riders who he thought were riding discourteously? Shared space doesn’t always work well, at least not for everyone. Here, people will see a road and expect traffic. That traffic will be bicycles. If you want more than the occasional person to be able to ride through then you don’t want it to be a continuous pedestrian plaza. If you want it to be a continuous plaza you don’t want people biking through.

Let’s watch the next few years and see if there are more complaints about pedestrian-bike conflict here (or possible occasional injury), or by the hassalo complex and other places that are designed as plazas but also see bike cut through traffic. Have some grad students at PSU run some surveys/video interactions during peak and off peak, look for complaints made to the city/property owners, or rants on news sites, blogs, or reddit etc…a couple years from now and see which seems to function better.

This is very cool! AND what’s with the tiny street trees and tree wells, especially where there appears to be no overhead wires? The inner east side is street tree deficient and recently lost some of its largest and healthiest street trees first at at SE Stark and 12th and then up on NE 14th and Couch (in the latter case because of parking requirements). Seems like a site like this is underplanted precisely when the City and developers need to be planted large form trees to replace those being removed.

Well, you wouldn’t want large form trees right next to a bike lane…the branches would be in the way of your head!

With any reasonable sized tree, the branches would be above your head.

Or your back if you’re arching it to look bigger and scarier.

I was very disappointed with consultant’s efforts at tree planting here and with PBOT’s acceptance. We all know that the City has very little interest in maintaining trees or landscape, which makes the site preparation and plant selection critical to long-term success. This is a location that is very well-suited to large-canopied trees, and trees that are adapted to these conditions. Whoever designed the spaced chose to sacrifice adequate planting area to create an awkwardly contrived geometry. Then they selected an upright form of a Liriodendron, a riparian-adapted species that is native to humid regions, not the arid west. Then, in another move that preferenced contrived geometry over best horticultural practices, they added additional trees in raised steel planters with concrete bottoms. These trees will have a very short life span and will be susceptible to windthrow because they cannot grow anchor roots due to the porous nature of potting soil and the narrow/confined growing conditions. IMHO, They could have allowed for 4′-6′ wide by 8′-10′ long planing wells for the street trees, located teh additional trees at the ends of the planters but planted in the ground, and selected a species with a broad canopy and adapted to poor, gravelly soil and a Mediterranean climate.

Best practice is to pave bike space in asphalt and pedestrian space in concrete, so that it’s more obvious what is the sidewalk and what is not. Note that on the Tilikum they are both in concrete with just a stripe in the middle, and many pedestrians don’t get the message and walk wherever. Asphalt offers very good and permanent color contrast.

Good point. It looks like it turned what could have been a nice plaza/public space (that you could also bike through) into a complicated, ugly, through-circulation route that people can’t walk across without being made to feel that they’re jaywalking.

It looks like a transportation project, not the urban design project it should have been. Better than a standard street, but far short of what it could have been.