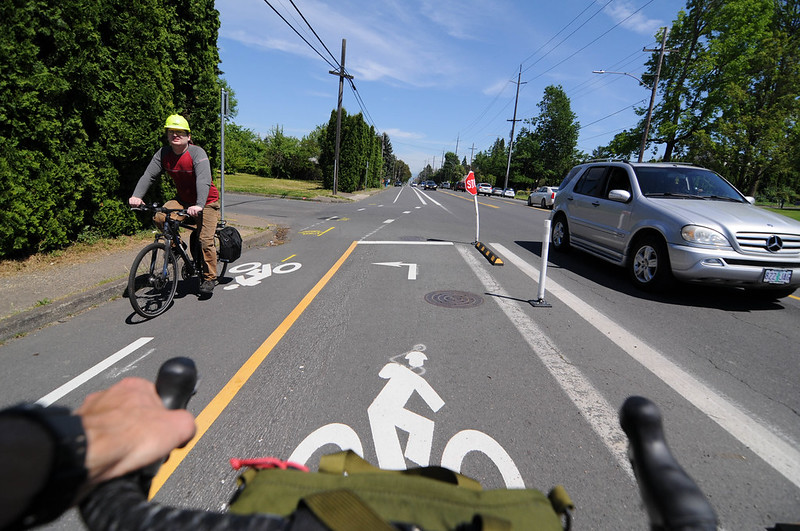 An opportunistic move by the Portland Bureau of Transportation has given us a glimpse into the future of biking and walking in the Cully neighborhood. 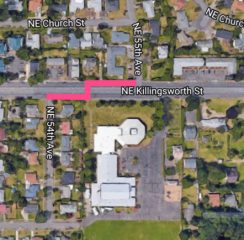 PBOT recently took advantage of a repaving project on Northeast Killingsworth to build a new striping and crossing treatment that connects NE 55th and 54th Avenues. It’s all part of the $3.3 million “Connected Cully” project that PBOT won funding for via a State of Oregon grant (the 2015-2018 STIP to be exact). I took a closer look at it yesterday.

PBOT has built a two-way bike lane for one block that’s separated from motor vehicle traffic with rubber curbs and plastic wands. Mid-way between 55th and 54th a bicycle rider has the choice to either continue straight or use a crosswalk. The crosswalk has a standard zebra-striped walking area and an additional green cross-bike treatment on both sides (to handle two-way bike traffic). There’s also a new signal with an activation button at the mid-block crossing. 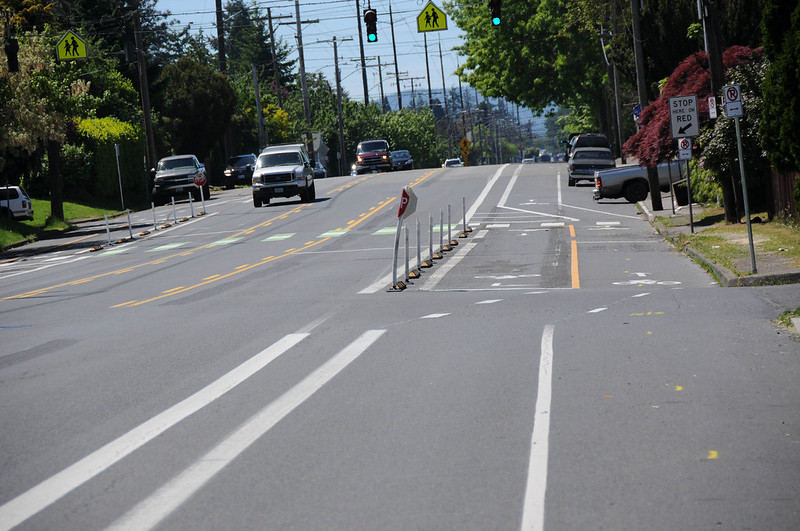 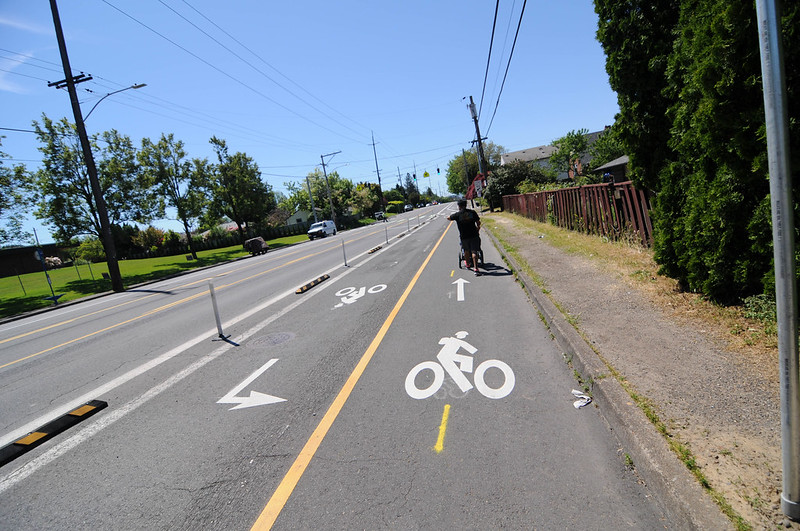 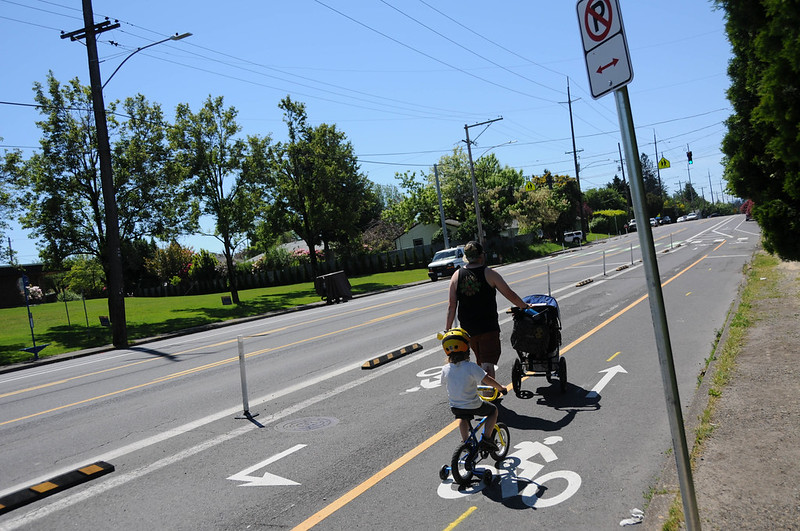 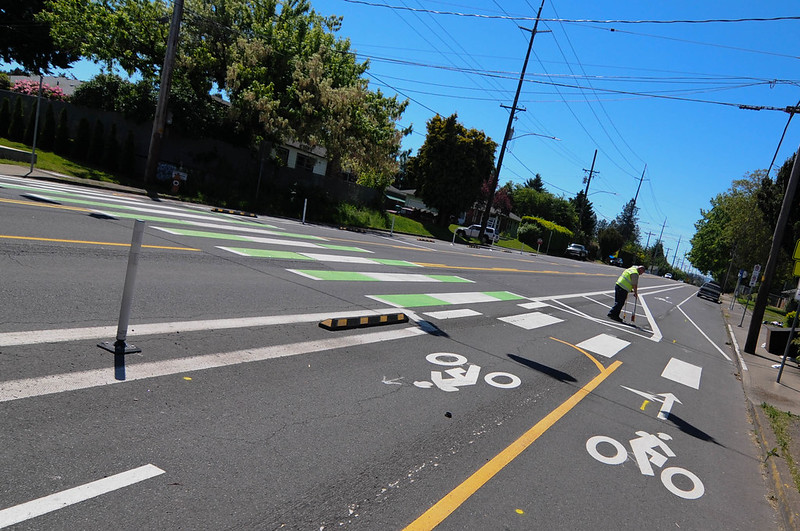 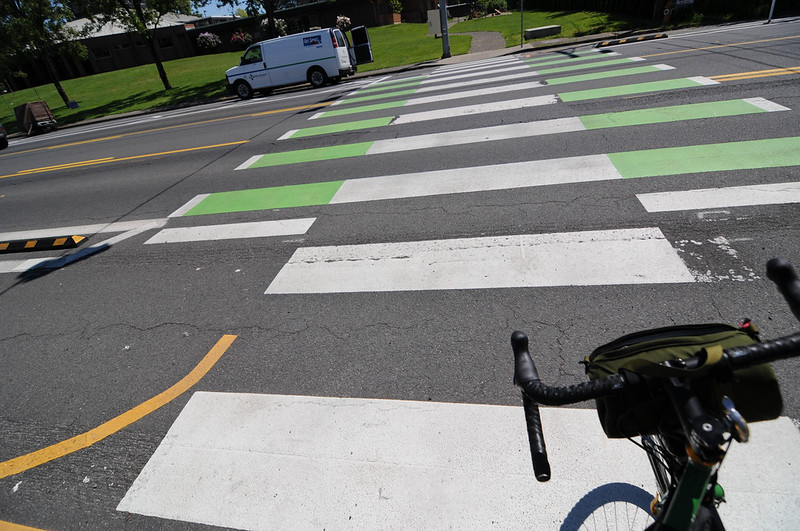 As you can see in the images, this area gets a lot of walking traffic. I was only there for a few minutes and saw three separate families come by — each of whom had toddlers in tow and were pushing a stroller. And they all used the new bike lane because there are no sidewalks.

The only major destination adjacent to this new bikeway is Trinity Lutheran Christian School. Since that’s a private institution, the changes to Killingsworth wouldn’t have been done as part of the City’s Safe Routes to School program (which focuses on public schools). I asked PBOT Communications Director John Brady about it and he said the new striping and crossing treatment was built as part of a future neighborhood greenway that will run along 55th and 54th Avenues. When PBOT got wind of a paving project on Killingsworth, they re-striped for the future instead of putting things back like they were. Way to go PBOT!

The Connected Cully project includes lots of other changes intended to make it more pleasant to walk and bike in this area. The info below was taken from the PBOT project description included in the ODOT grant application: 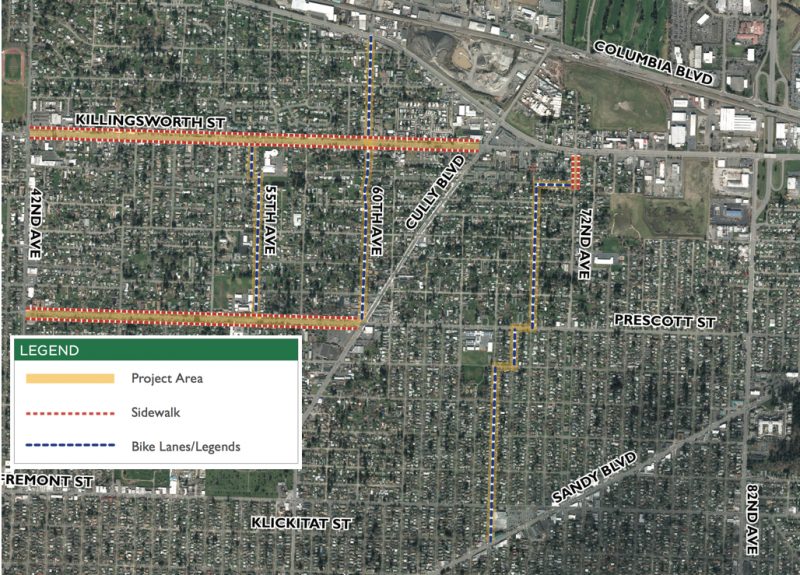 This is just one of several safe streets and active transportation initiatives in the Cully area. As we reported in February, Cully won over $2 million in infrastructure investments that will include a new “biking and walking parkway” on NE 72nd Avenue between Lombard and Fremont.

Looks like a decent facility. Am I correct in that the cycleway appears to switch sides of the street halfway down? Seems like an unnecessary conflict point, and there does not appear to be any way for cyclists to activate the crossing light.

PBOT deserves some praise for not simply maintaining the status quo here, although the facility needs to be approximately 100 times longer. 😉

I really dislike these short, two-way bike ways. It strikes me as pretty dangerous in a situation like this where cars are going pretty fast. Why not just add a buffered bike lane on either die of the street? The signal, however, looks great. From the picture (2nd photo) it looks like a standard signal with a red, yellow and green phase. I really dislike the hawks and rapid flashing beacons. They do not look like traffic signal and people driving treat them them advisory signs not commands. I regularly see people driving blow right through when flashing red. People seldom go through solid reds at traffic signals.

The first and third photos already suggests some driver aggressively cut the corner on to 54th and clipped the bike stop-sign.

I’m not sure that’s what happened. Cutting short onto 54th would put the driver in the wrong lane and far away from where he should be.

Seems at least as like that a cyclist clipped the sign when moving at speed when wanting to switch to the other side of the street as the bend in the bollard is higher than a bumper would be. Some people ride bikes with things that stick out, but even an ordinary cyclist can flatten a bollard — I’ve done it a few times myself.

The damage is decidedly weird. What appears to be a metal sign that’s not visibly scarred has somehow been wrapped around a flimsy pole. I’ve nailed plastic bollards while riding my bike and they go right down — if you have direct skin contact, it just smarts a bit.

Not sure how to wrap the sign around the pole even on purpose.

The direction of the bend in the sign suggests it was hit from the outside (car-side) by something sweeping across the sign at an angle. I had imagined a driver severely cutting the corner to beat on oncoming car, but that may be far fetched given the lane they would have to be aiming for. It’s strange, for sure.

The damage to that sign is pretty identical to what kept happening to the same model of sign at the bottom of the NE 21st bikeway over I-84 at NE Pacific. That’s right next to the Sunshine Dairy and in a place where their big rigs had to back up or make tight turns fairly often. PBOT ended up moving the stop sign there to the curb of the sidewalk after at least three of the stop signs there ended up run over and bent.

Middle of the Road Guy
Reply to  MaxD

How can you tell they are Hispanic?

There are buffered bike lanes on both sides of the street for a ways outside of the two-way cycle track area. This just adds two-way for part of it in addition to the normal bike lanes to help the future greenway job across Killingsworth. If you’re riding on Killingsworth in either direction, you just ignore the cycletrack and continue as you always would. If you’re riding N/S on 53/54th, then you use the cycle track to help with the jog.

Coincidently the most current Google Earth view of these intersections show what appears to be a Sunday Streets event underway… you can follow the people ‘ants’ to see the route, which uses this exact connection (less the crosswalk it looks like).

Side note, why are all of the new bike stencils wearing backpacks?

good observation Adam, that is a really bizarre detail to have added.

My guess it is an attempt to humanize a stick figure and maybe invoke an image of a kid to make people more careful.

I shudder to think the amount of time probably spent in meetings dedicated to how a stick figure on a bike should be represented. I’ll bet every design gets quite a bit of debate.

The 54th/54th connection was identified and suggested by the Safe Routes to School Report for Rigler Elementary. It includes a future bike/ped path south of Emerson and another jog at Prescott to connect south to a future Skidmore-ish greenway.

South of Emerson connection is on page 45:
https://www.portlandoregon.gov/transportation/article/479720

I truly don’t understand the fascination with the two-way bike lanes on one side of the street.

I had personal experience with this decades ago on the campus of the University of Illinois in Urbana. I’ve seen no evidence that putting bicyclists in an unexpected position on the roadway produces good results.

The two-way bike lanes were used to take advantage of the existing midblock crosswalk. Otherwise, you’d have crossings at 54th and 55th, plus the midblock crossing for pedestrians, to accomplish the stated purpose of connecting 54th to 55th. Considering it’s aimed at neighborhood greenway users (8/80), it’s not an unreasonable approach.

MaxD
Reply to  Gary B

I don’t understand why you would have to change the number or way the crossing works if you a bike lane on either die versus a 2-way on one side of the road. Can you elaborate?

There’s no chance I’ll ever use the word “protected” to describe that. There’s no protection, just a modicum of separation.

MaxD
it looks like a standard signal with a red, yellow and green phase. I really dislike the hawks and rapid flashing beacons.

Every time one of those says “Warning, cars may not stop” to me, I want to punch whomever decided that was an approvable piece of infrastructure.

I live on Prescott between 42nd and Cully. What is “curb tight sidewalk infill?”