Portland’s local bike industry is always in flux: coming, going, making it, and breaking it. Because business is a key part of our local scene, we try to keep an eye on it all. Here are three bits of news from local makers and sellers that you should know about.

I love Norther Cycles. Starmichael Bowman and Mark Simmons have come together to create something special on North Albina just north of Killingsworth Avenue. They can make and fix anything (their shop is like Willy Wonka’s Chocolate Factory for bike nerds) and they specialize in bicycles built for reliable rambling with an aesthetic that’s classic yet modern and functional. I always say that to make it in bike retail in Portland, you’ve got to bring something distinctive to the table, and Norther does that as well as anyone.

With the shop on solid ground, Norther is flexing its bike-making muscle. Their new Klickitat Pass adventure/sport touring frameset is an exciting step forward. The bike is built right in the shop and is being offered on a limited basis. Only 10 will be made and there are three sizes; 54, 56, and 58 cm. The price is $2,000. Add $200 for a dynamo hub wired up to power a front and rear light.

Here’s the verbage on the bike:

The Klickitat is not a pared down ultra light race bike with the tightest geometry ever. Because it’s not meant to be the lightest fasted bike ever, just light and fast enough to fall in love with. It doesn’t have five thousand braze ons, so it can be way overloaded. It has just enough for smart set ups.

As for the great debate on tubing sizes and wall thickness the Klickitat is right in the middle. It doesn’t use the scary lightest frame tubes available. Because that would be a huge mistake as it would be to light duty for most people and situations, and it would dent up to easy. We also didn’t use the heaviest tubes ever because we want it to still ride awesome and be fun even when it’s not fully loaded down. Could we go smaller and lighter, yes! Would it make sense for us, or any small batch builder to do that, no! I’m constantly interviewing people about their bike and how they feel about it and almost no one feels like there bike is to heavy duty or dead feeling, but man if a bike is two [sic] light and flexi people describe it as scary, and usually end up selling their bikes pretty quickly.

We don’t believe in this. We want people to love our bikes. We want you to reach for your Klickitat 9 times out of 10 no matter how many bikes you have to choose from.

Learn more and reserve yours at NortherCycles.com.

Another north Portland-based bike maker, Breadwinner Cycles, has a limited edition bike that is unabashedly about going fast. Tony Pereira and Ira Ryan have put together a racier version of their Lolo road bike that’s only available until May 5th. It comes with the option of three SRAM-oriented parts builds, a “motorsport inspired” paint job, and a special wool jersey (also made in Portland!) by ANTHM Collective. The price is $6,890.

Now through May 5th, the limited edition thru axle Lolo is available with three SRAM gruppos to choose from, carbon wheel upgrades and the option of a custom painted Ritchey Solostreem bar/stem combo.

Mixing ultra-light and responsive Columbus Life tubing with decades of road racing and riding pedigree, the Lolo was made to dance up mountains and carve twisty descents. This smooth riding, light steel tubing is TIG welded with precision and fitted with an Enve carbon fork, resulting in a impeccable performance machine. A modern road bike in design and style, with sloping top tube and double oversize tubing, the Lolo is a fast and responsive road racer that flies and feels great all day long.

Get yours and learn more at BreadwinnerCycles.com.

Western Bikeworks is one of Portland’s largest bike shops. But the 10,000 square feet of their NW Lovejoy and 17th Avenue store was a bit overwhelming for some customers and a fresh layout was needed. According to Bicycle Retailer & Industry News, the shop hired a consultant and has completed a major update to the interior. 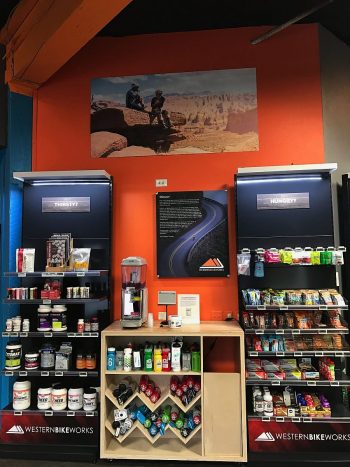 The remodel included carving out a triathlon-specific zone to house tri apparel, accessories, wetsuits and a complete offering of tri bikes. The tri section is located right near the bike fit area, so that high-end triathletes can easily dial in their perfect bike fit. Western Bikeworks recently acquired rights to triathlon retailer The Athlete’s Lounge’s name and customer base after it closed in 2016.

“This was an exciting project for us to work on, as Portland has some of the best retail stores in the country. This shop suffered from many of the same challenges that typical shops deal with; confusing sightlines, overwhelming bike presentation, uninspiring apparel sections and lack of signage or graphics,” said 3 Dots Design owner Holly Wiese.

“I think customers will be very pleasantly surprised with the new vibe and layout of the store, and I’m confident that Western Bikeworks will start selling more product as well,” Wiese added.

As always, if you work in the local bike industry and have a story you’d like to share here (or even off the record, we do that too), please drop me a line. For more local, bite-sized bike news posts, browse our Industry Ticker archives.

This was supposed to be a joke but the formatting got messed up. 😛

That Klickitat does look like a nice bike though.

that Breadwinner looks amazing. $6800, while expensive, is pretty fair for a US-made high end custom bike.

My Vanilla slightly more…9 years ago.

I’m holding out for a Magna adventure bike, ’cause I want a REAL adventure.

BP community in general seems to have a lot of hate towards bikes costing this much. But the Norther looks pretty useful right out of the box.

As you know, I delete 99% of your comments. I do that because I do not like how you generalize about what “the BP community” likes and dislikes. If you want to see your comments published and if you want to be a contributing member of this comment section, please stop making those type of statements.

People who read this site (keep in mind commenters are only a tiny tiny fraction of our readers)… have an extremely wide variety of views and perspectives.

The Norther looks like a great Classic bike. Traditional lugged steel frames like this are not availible from mass production builders anymore, and this looks like a nice frame at a fair price.

Norther are fantastic folks. I’ve watched their frames being built and the quality is excellent. That Lolo looks slick and fast too!

I wanted to mention that many local framebuilders – including hopefully Norther and Breadwinner? – will be showing frames and bikes, and hanging out over beers, at Velocult’s Modern Custom Day on June 4. This will be similar to the Modern Custom Day we did last fall.

Modern means builders who are still taking orders, as opposed to the great framebuilders of yesteryear. If you want to see the latter, come to Classic and Vintage day on June 3.

We’re incredibly lucky to live in a city with so much local frame building talent and creativity. More info in the Pedalpalooza calendar.

I had a chance to view the Klickitat in the Norther Cycles shop on Saturday. It’s a really nice bike.

It was fun to check the shop out and see what they were doing.