According to an email sent to nearby residents and business owners, the Bureau of Transportation plans to stripe a 10-foot wide bike lane. This stretch of 16th currently has three lanes — one for auto parking and two standard vehicle lanes. The new design will retain the parking lane and switch one of the standard lanes into a bicycle-only travel lane (see the cross section above).

Here’s what the intersection of 16th and Johnson looks like today (facing south, notice the existing bike lane in the lower right): 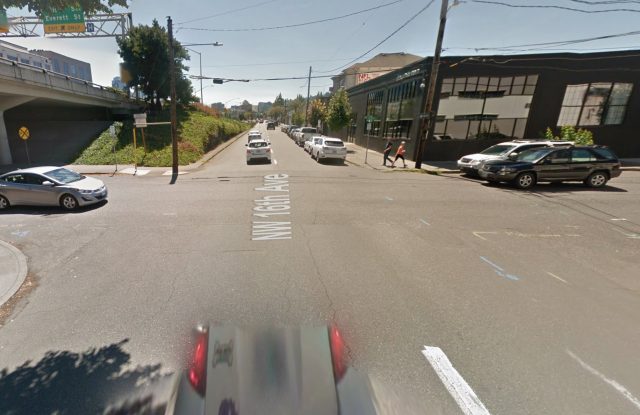 Jeff Smith with PBOT’s Active Transportation and Safety Division says they considered a parking-protected bike lane (where the bike lane is curbside and auto parking “protects” bicycle traffic from motorized vehicle traffic); but the Portland Fire Bureau objected. “Since 16th is a designated major emergency response route (with fire station nearby on Johnson),” Smith wrote in the email notice, “the Fire Bureau was concerned about motor vehicles being unable to clear the lane at times when parking was heavily utilized. The proposed design, with a bike lane and shy zones adjacent to the motor vehicle lane, provides this necessary ‘pull over’ space when an emergency vehicle needs to get through.”

In addition to the new lane configuration, PBOT has recently reduced the post speed limit in this section of 16th from 30 to 25 mph. The project was prioritized by PBOT because it complements the new carfree bridge over I-405 coming to nearby Flanders Street in 2018. The new bike lane will also improve connections to the bike lanes striped on NW Everett in 2014.

Also worth noting is that NW Johnson is a major bike route and the crossing of 16th is quite stressful. The reduction of one standard vehicle lane and addition of cycling space should make it much safer.

Nearby resident Iain Mackenzie is happy to see this project. “As someone who lives on NW 16th and cycles on the street regularly,” he shared with us via email this morning. “I’m very very pleased to see the gap filled.”

PBOT says this project cost about $8,500 and is should start soon (depending on the weather).

Thank goodness for the fire department, in more ways than one. I hate “parking protected” bike lanes. They always fill with debris and make intersections just too much of an adventure for my tastes.

This may be the highest quality proposal PBoT has come up with in a while. Door zones extend up to twelve feet from the curb, so while the door zone does intrude on the bike lane here, it will leave four feet of bike lane clear of the door zone and an additional two feet of buffer. I would have preferred it if they had used more of the buffer space to shift the bike lane away from the doors, which are a much greater hazard than overtaking traffic next to a bike lane, but as long as they put the wider stripe at the buffer/travel lane border they’ve got a B+ on this assignment.

This is a terrible design. The bike lane should be curb-tight and protected with a curb or planter boxes. Remove the parking lane along the bike lane for maximum visibility. This is the design used in Vancouver BC and works very well.

Adam, your design suggestion is a terrible design, too. Dream bigger. Remove all vehicle traffic from NW 16th Ave. No baby steps, only giant steps.

Absent a protected bike lane for the entire length of NW 16th Ave (potentially a worthy idea, but outside of the scope of this project) the buffered bike lane is the best choice. A bike lane that changes configuration for a mere three blocks would be confusing for everyone.

It’s really not confusing. You just follow the pavement markings. If we need to create protected infrastructure three blocks at a time, so be it. It’s better than just slapping more paint on the roadway for drivers to drive and double park in.

If one must rely on pavement markings to provide wayfinding, it is by definition a bad design.

“Also worth noting is that NW Johnson is a major bike route and the crossing of 16th is quite stressful. The reduction of one standard vehicle lane and addition of cycling space should make it much safer.”
Agreed.

Also I see a fair amount of pedestrian traffic at this location too, some zebra stripes should be there too. After all, that stretch of NW Johnson is a “Neighborhood Greenway”. I would think that alone would qualify it for some type of crossing indication.

Technical point for PBoT: on the diagramme provided, should not the area between the car and bikeway be labelled as “door zone” and not “shy zone”?

My thinking is more of a developing a marketing strategy…yes technically it does perform as a “shy zone” but its greater safety value is as a “door zone” and “driver/ passenger refuge” to enter/ exit cars. [Its much more comfortable to do this next to bike traffic than 50 mph car and truck traffic.]

The strategy being is that it may have greater functionality/ support for drivers than cyclists (good for the larger public) plus PBoT / council may fold and drop one “shy zone” if the public pushes back…the thinking being “why do cyclists need two shy zones, it seems extravagant” etc.

PS. This is great news too. Thanks PBoT!!!

The parking on 16th south of Johnson needs to be restricted to only 1 side. Historically it is on both sides. Parking needs to be eliminated on the east side. This will make the crossing at Johnson for bikes much easier.
right now the motorist or the cyclist needs to be half into the traffic lane going either direction to see traffic going 35 in the 25 zone using both lanes, cars in bike lane and travel lane.

Not the way the PBA sees it. No parking spot left behind.

The biggest issue that I’m seeing is that as someone who drives into downtown occasionally, I always use the Everette/Glisan exit when heading into the Alphabet district. This usually mean quickly merging across both lanes of traffic (one of which will now be a bike lane) to make a right on Flanders. I can only hope that they make the NW 16th and Flanders intersection a (well signed) “No Right Turns” off of 16th because otherwise people are going to get hit.

Gary B
Reply to  Tori Bortman

This change is upstream of the offramp (ends at Glisan, which is where the offramp joins 16th), you don’t encounter it on the route you’ve described. The portion downstream of the Everett/Glisan exit is already 2 standard lanes plus a bike lane. That’s what you’re currently crossing to make that right on Flanders. Hopefully you’ve been careful!

Jumping three lanes to make the right turn on Flanders isn’t the correct way to negotiate that offramp. The correct way is to stay in your lane, left on Everett, left on 15th, then left on glisan. Sure it’s inconvenient and out of the way, but much less stressful and dangerous than trying to jump 3 lanes in less than 200′ on a very busy road.

I never realized NW 16th was stripped for a bike lane in that area, as I happily ride on NW 19th. I’ll gladly cover three additional blocks to avoid exhaust, noise, and anxious drivers getting on and off 405. Plus, NW 19th offers a longer contiguous route, unless I’m missing something.

An improvement in that area to get me excited is to pull up the abandoned rails that still protrude on NW 15th, but I recognize that would cost more than the $8,500 anticipated for the modest 16th Ave changes.