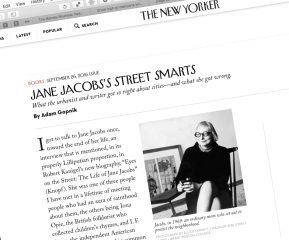 This week’s Monday Roundup is brought to you by the Oregon Handmade Bike & Beer Festival, coming your way October 7-8th.

Welcome to Monday! Here are the links and stories that caught our eyes last week…

Car culture down under: In Australia, burnout competitions are a serious thing (I know this from experience). And for one dad they are very serious. So much so that he has trained his five-year-old to do them on his own. Unfortunately for him that’s illegal and authorities have intervened.

Cultural values: A bike maker has started labeling their bike boxes as televisions in order to get better treatment from shippers.

Jane Jacobs get New Yorker’ed: Excellent writer Adam Gopnik takes a deep dive into the ideas and influences of famed urbanist Jane Jacobs — 54 years after her groundbreaking book was reviewed in the same magazine.

The science (and bike) guy: Corporate content like this rarely goes well, but we sort of like the video series Diamondback Bicycles has put together with Bill Nye, the “science guy.”

Edmonton can do it: The Canadian city has put forward a proposal for a “minimum grid” of protected bikeways in their downtown core. Portland has been working on this for years but still hasn’t released many details.

Pedaling in the classroom: We all know some kids are healthier and smarter when they bike to school; but did you know the same might apply to biking in school?

They finally gave up: The ridiculous, five-year lawsuit against an innocent and successful bikeway in Brooklyn’s Park Slope neighbohood has finally been dropped.

Sweden supports DIY: In a bid to battle the throwaway economy and encourage a DIY ethic, the Swedish government will ease taxes on minor repairs of things like shoes and bicycles.

Open Streets boosted in L.A.: The Sunday Parkways equivalent in Los Angeles is being greatly expanded to 17 events.

Vision More Enforcement: This story from Chicago about how its Vision Zero plan could impact people of color is precisely why the City of Portland left increased police enforcement out of our plan.

Sneaky criminals: People will go to great lengths in order to maintain their illegal and dangerous use of cars — including James Bond-like gadgets that flip their license plates.

San Fran transformers: Another major U.S. city has sprouted an anonmyous group that creates unsanctioned bikeways and crosswalks. It’s another sign that governments and established advocacy groups are not moving fast enough to make streets safe.

Feds wants beds not cars: And in just-breaking news… Even the White House has just declared that auto parking requirements should be eliminated because they create an “undue burden” on development and disproportionately impact low-income households.

Defying the ban: Iranian women are heroically protesting their government’s ban on cycling by riding their bikes and posting photos to social media.

Read this, it’ll make us stronger: Charles Marohn of StrongTowns has a must-read about infrastructure spending that’s very relevant given that Oregon legislatures and leaders are gearing up for a big spending bill. He lays down some essential truths that should dictate the policy conversation. Bonus: Marohn is coming to Portland for a speaking event on October 3rd!

And finally, our Tweet of the Week goes to Street Trust Advocacy Director Gerik Kransky. After a Twitter conversation where I said “incrementalism is failure,” he posed this question:
https://twitter.com/gerikkransky/status/778702200272846849

If you come across a worthwhile article, please drop us a line and you might see it in next week’s roundup.

I’m glad that LEDs have made bicycle lights more visible and less of a hassle. If we could work on the theft problem a bit more… PLEASE… even better. On the other hand, statistics say that they’re no different than any other figurative (helmets) or literal (protected lane) concrete solution: the safety benefits are wildly overstated.

What was that about Incremental improvements again?

“…I’m glad that LEDs have made bicycle lights more visible and less of a hassle. …. On the other hand, statistics say that they’re no different than. …” champs

Some people do like to equip their bikes with numerous head and tail lights, as opposed to just one on front and one on back. Depending on how and where they’re mounted, more than one front and back might provide a higher level of visibility to road users…but I think the two main lights are quite effective and important to have.

I came across an old NiteRider battery the other day… what a boat anchor!

The Bike Light Database (thanks Nathan!) is an excellent resource, and there are guidelines for placing tail lights for best effectiveness here:
https://www.bikelightdatabase.com/best/taillights

After daylight savings time ends I’ll be running a lighting workshop for cyclists at my workplace (San Ramon, CA). You park a car with headlights on and video cyclists riding away, turning at 500′, and returning. People are encouraged to bring whatever reflective clothing and lighting they use on a regular basis, and then we review the results as a group. People’s assumptions of their visibility are often challenged; it’s an illuminating exercise.

Some truckers put lights on every conceivable place on their rigs so you can tell it’s an 18-wheeler at night. Bikes, especially cargo bikes, should be encouraged to do the same thing, even if not req’d by law. The glacial pace of decision making in Portland makes no sense. Nobody wants to rock the boat before an election, even if it’s for good reasons. What is wrong with being bold and / or daring?

I’m not convinced that lights on bikes are even effective… drivers often don’t bother to look, so they don’t see you even if you have lights…

The brighter, rudely bright, the better. Drivers need a sharp stick in the eye to notice us. Polite lighting I consider a luxury for some future in which drivers are human.

Most people have inadequate lighting, but it is possible to buy lights that blind/distract anyone you encounter which is not a good thing.

And for the love of God, aim your lights properly and don’t use a daytime strobe at night (which is very different than a pulse pattern designed for night use), particularly if you ride on any path with two way ped or bike traffic.

I find lights to be helpful. My anecdotal experience is that running a daytime flasher significantly reduces people pulling in front of you from any direction and that they tend to give more room when passing. At night, the benefit is even greater.

I even wear lights when walking in the dark and make sure the dog is wearing one too. I find this drastically reduces conflicts with chucklehead cyclists riding without lights on paths.

Traffic cams which give tickets to people ( the drivers) seem to have lots of logistic and legal problems, now including these james bond liscence plates. We can solve this by enforcing against the property (vehicle) involved in the crime. So instead of sending tickets to the driver, the camera just marks the lawbreaking car with a rfid dart or something, then later it is located by the mobile car crushing crew who deliver justice. Break the law and the vehicle you broke it in gets crushed.

“And finally, our Tweet of the Week goes to Street Trust Advocacy Director Gerik Kransky. After a Twitter conversation where I said “incrementalism is failure,” he posed this question:”

Question for ppl who want more funding for bicycle, pedestrian & transit projects. Do you think incremental victories are actually failures?

Why should readers not be provided with at least a very brief, even a one sentence summary of what this ‘ism’, incrementalism, relative to bike infrastructure, is? I’m not sure what the writer intended with that phrase, so here I am having to deduce some meaning from it.

I gather, the implication is that small infrastructure additions like isolated bike lane continuations, sharrows, signage, rather than broad sweeping transformations of street infrastructure in support of hoped for increases in the number of people that may decide to bike…”is failure”…but then I have to say, I’m not sure that’s the intended meaning, or if it was some other.

Though the pace can be frustratingly slow, it seems that any addition to bike infrastructure is a success. If nothing else, the appearance of new infrastructure helps to expand awareness of biking as legitimate means of travel…I think. Case in point: out in Beaveton on SW Broadway through Old Town..Beav Bakery, the new and old pizza joints….the city finally painted some sharrows on the street…as if this street really needed that provision for biking…I mean, it’s a quiet, slow speed street already, friendly for biking. But the fact that the curios bike symbols are there, may be helping awareness of biking here in town. It’s not much, but I have to regard the sharrow bike symbols as at least some success for biking.

Is it a segment of bike lane which I’ll have to merge out of in 5s while one driver behind me would have room to pass, but the tailgate follow-the-leader driver behind them wouldn’t? That’s definitely a failure.

We have transportation infrastructure, and even a small bit of unmarked pavement works great for people until heavy vehicles get involved at high speeds and volumes. What is bike (or even pedestrian) infrastructure except getting people out of the way of cars?

Can’t afford continuous sidewalks and bike lanes right now? That’s fine. Just close the street to through motor traffic until it’s done. Incrementalism can take the freeway and go around, thanks.

Hiding in the latter portion of the take down of Share the Road, down with the graphs, is a plug for traffic law enforcement and its effectiveness at keeping cyclists safe. The author showed a significant, relative to the national trend, increase in cycling injuries and deaths at the hands of motorists after a jurisdiction ended traffic law enforcement.

That should come as no surprise, but I see so many on this site argue against the effectiveness of traffic law enforcement that it seems worthwhile to point out that it directly saves lives and likely puts butts in saddles better than most other things we can realistically accomplish.

At this point in time, who really cares which cities are named best for cycling by magazines and advocacy groups? It’s a “tallest midget” award at best. I’m not saying we shouldn’t strive to improve the situation, just that the situation is so bad that we shouldn’t waste much time congratulating ourselves on taking baby steps.

Not sure about this enforcement equity business. I keep reading “gang enforcement team officers” and “traffic stop” in the police reports.

Are we sure it’s not really about unlicensed, uninsured, drunk, white people speeding their way to the suburbs?

Sure, walking up on a car which might contain an armed felon is dicey. Breathalyzer drone, show your license and proof of insurance to the camera, and your ticket is in the mail. Robocop doesn’t need a gun.