Portland isn’t known for its rock music legacy, but we do have something no other city has: memorials to two modern-day rock titans that are made out of bike lane markings.

You might have heard about our huge Bowie vs Prince bike ride. Not to be outdone, maintenance crews from the City of Portland’s transportation bureau have lent their creative skills to bike lane symbols that honor both Prince and David Bowie — two artists who unexpectedly passed away this year.

The Prince bike lane character can be found on East Burnside at 9th. It features Prince’s iconic symbol on a purple cape and the rider is pedaling through a torrent of purple rain (of course) that’s falling from a cloud. 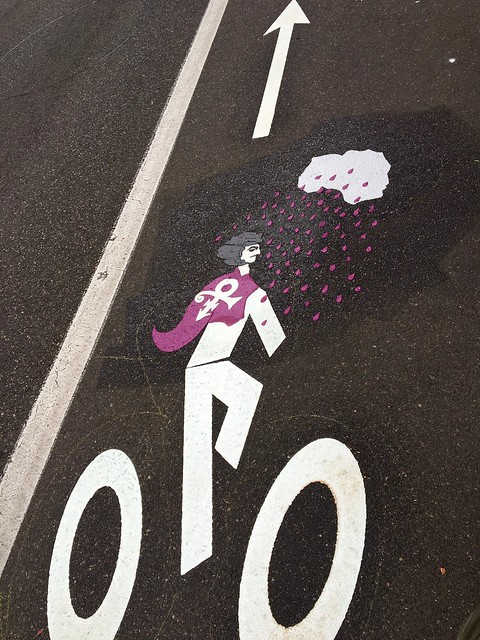 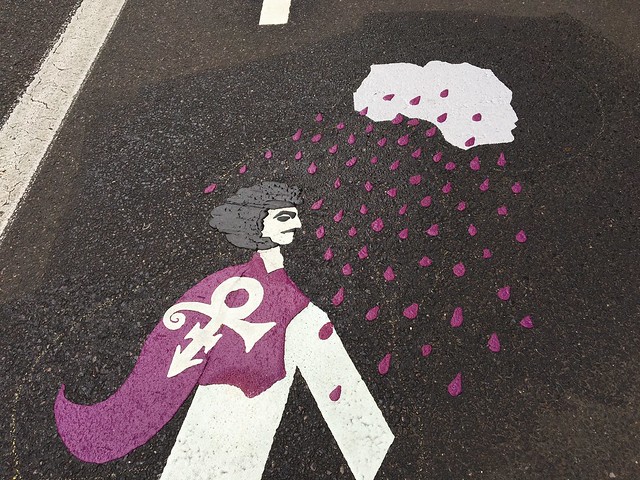 You can find the David Bowie bike lane on SW Broadway and Main. You’ll know it’s him by the guitar, the stars, the makeup and the hair. 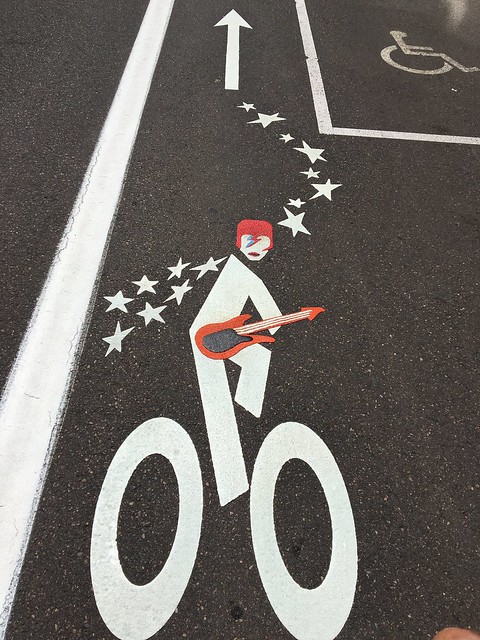 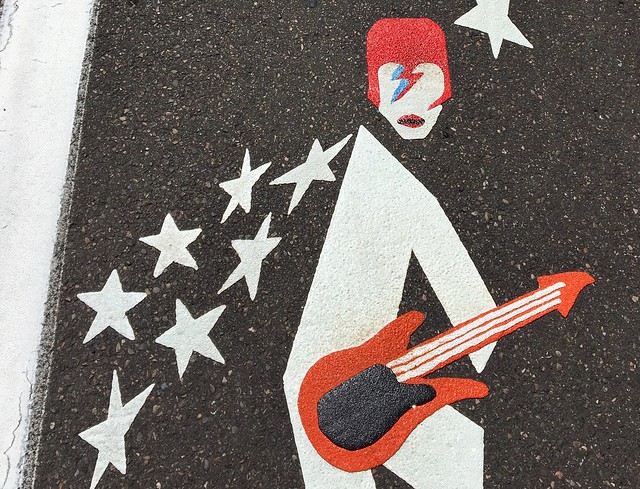 These are just two of dozens of bike lane characters the City of Portland has created over the years. The practice started in 1999 by a city maintenance employee named Kirstin Byer. She would take pieces of leftover thermoplastic from bike lane symbol installations and lay them down in funny ways. The first designs were very simple: a cowboy, a glass in the rider’s hand, and so on. The designs usually relate to something nearby. There was a bike lane symbol with a bag of golf clubs on its back near a golf course and one reading a book next to a university.

Back in 2009 we shared images of many of the original markings that were collected by Portlander Jim Waigand.

Over the years the characters get paved over and they vanish. I think the ephemeral nature adds to the fun of spotting one.

The practice seemed to be on hiatus for many years but as of late 2014 it’s become something of a standard practice once again. PBOT tweets out photos of new characters once or twice a month.

The Oregonian’s transportation reporter Eliot Njus has just created a Google Map where anyone can add the location of a bike lane character. Make sure to add your favorites!

This is the best thing ever. <3

How fab…though it would have been soooo much more PedalPaloozaish if Bowie and Price could have been on the same block but going in opposite directions.

(And from heaven..or Google Earth looking down it would have been Bowie vs. Price forever!)

The best day of my life thus far might have been the day that Director Treat called me and asked me where I recommended a Prince bike lane symbol should go.

I suggested they should have a Bowie character too and within 24-hours, they’d started working on one. I love this city’s transportation professionals.

Cool story Lily! I didn’t know you had a hand in them.

That is fantastic – somewhere there’s a work order that says I ONLY WANT TO SEE PRINCE LAUGHING IN THE PURPLE RAIN, and some PBOT guy was like – ‘yeah, yeah – I totally got this’.

keep up the good work 🙂

I’m curious what significance the location you chose has? Care to share? Very cool!

Portland, as the birthplace of long-time rock anthem “Louie Louie” is indeed known for its rock legacy.

I’m glad we know how to have fun.

Good to know PBOT’s got time and money to do that, but not sweep the street weekly.

Basic maintenance is pretty fundamental and should be a priority over aesthetics.

Nope. Also didn’t miss how it’s basically impossible to not get 2-3 flats a week unless you’re not running solidcore tires in that city.

Or use Conti Gatorskins and call it good.

Running Nimbus with some heavy kevlar tire liners and slime in the tubes.

Apparently I’ve been doing the impossible for the past 15 years. Good to know!

Marathon Pluses. I get maybe one flat per year.

Paul: take a look at the past stories. I believe you will find that the materials used are scrap and the people who design them do the work on their own time. Putting bike symbols down on a bike lane is standard. Making them fun and artistic is a gift to the city by employees.

I looked at the map linked at the bottom of the article. It seems there ate about 200of them missing!!

Anyone care to add to it?