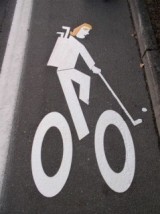 One of Portland’s customized
bike lane markings.
-Slideshow below-
(Photo: City of Portland)

2009 marks the 10th anniversary of a proud Portland tradition: our creatively modified bike lane pavement markings or what I like to call, “bike lane guys”.

The “unlikely cycling hero” who started the tradition in 1999 — according to Portlander Jim Waigand, who has documented the phenomenon since 2003 — is former City employee Todd Roberts. In an article published in VeloVision Magazine in September 2003, Waigand uncovered the fascinating story behind the practice. (I’ve uploaded that article as a PDF with permission from the publisher. You can download it here.)

According to Waigand, Roberts (who thinks cycling is “boring as hell”) said he did it at first because he was “just screwin’ with my boss, seeing what I could get away with.” Roberts had a triangular piece of thermoplastic material left over from a job and made it into a hat. His supervisor said “looks good,” and the tradition was born.

These days, Kirstin Byer is the City’s chief of pavement markings. She was featured in a 2005 documentary about the bike lane characters created by Portlander Joe Biel (of Microcosm Publishing fame) called Martinis in the Bike Lane.

I met Waigand several years ago in his Northeast Portland home. He documents the markings by snapping photos and keeping an updated spreadsheet of their location. The markings are constantly being paved over, so Waigand’s photos are a valuable part of Portland’s urban lore.

I’ve scanned several of Waigand’s photos, along with a few from the City of Portland archives which you can see below. As Waigand said in his 2003 VeloVision article, “these Portland bike lane signs add a welcome touch of humanity.” I agree, and I hope it’s a tradition that continues for at least another 10 years. 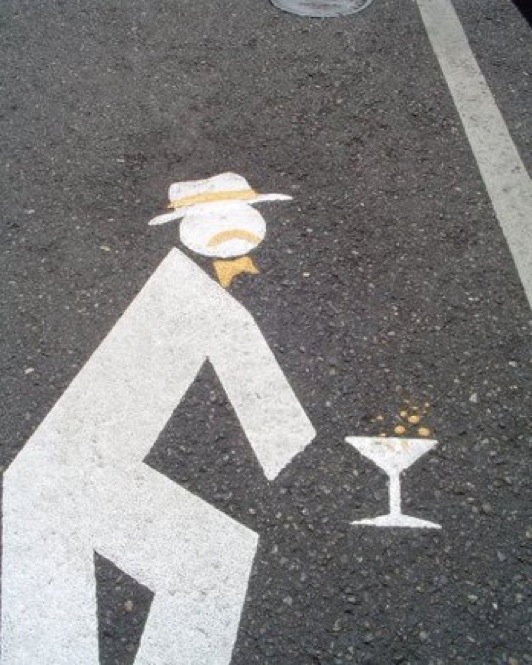 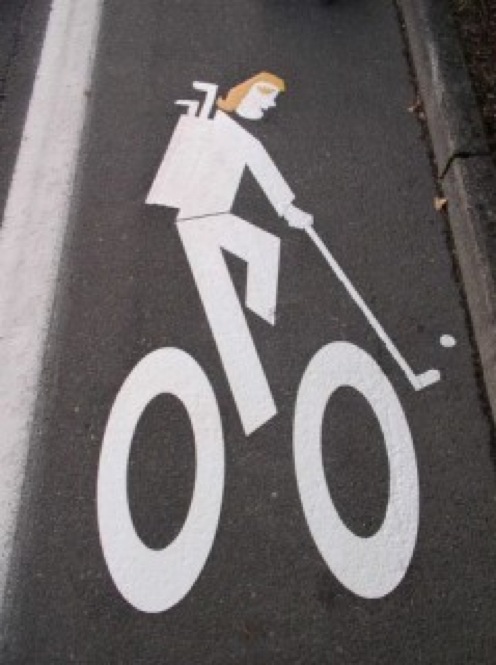 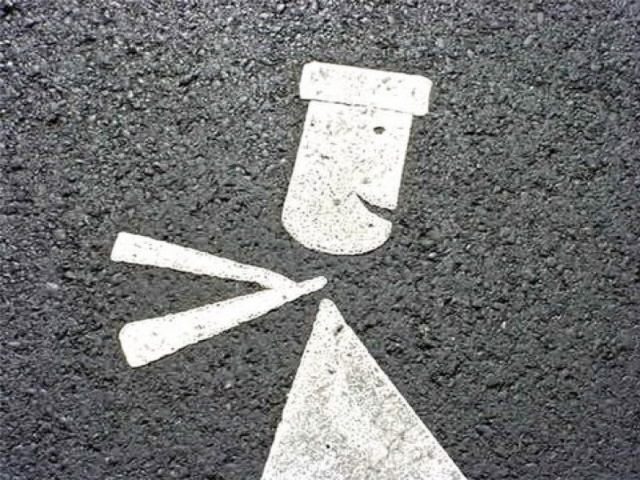 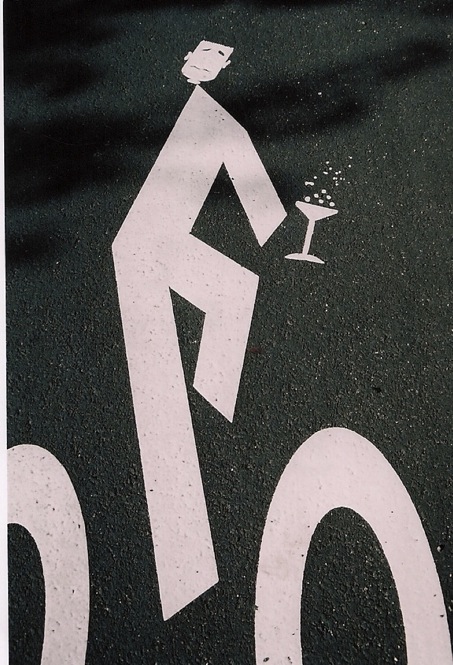 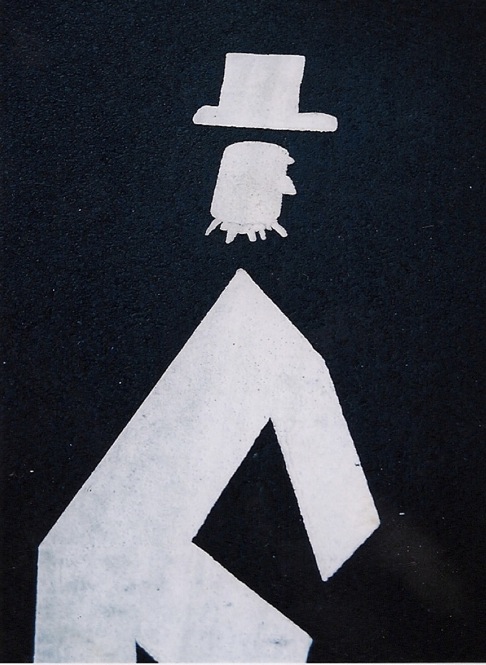 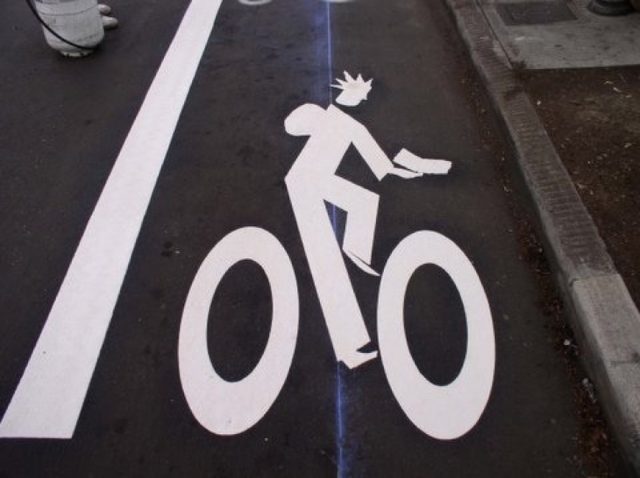 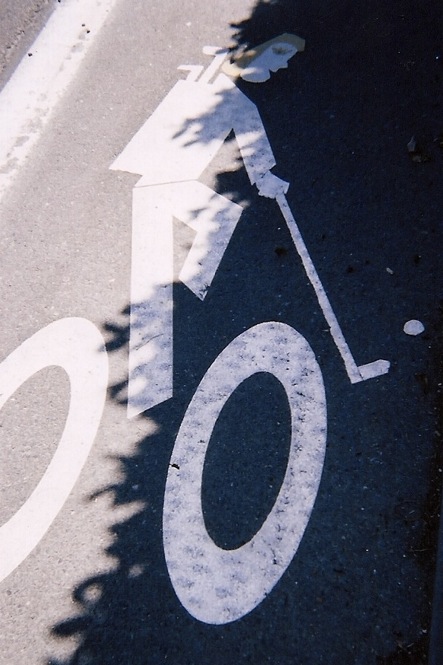 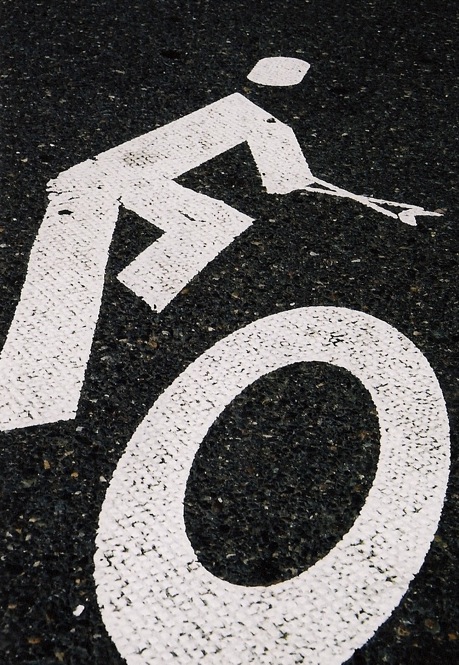 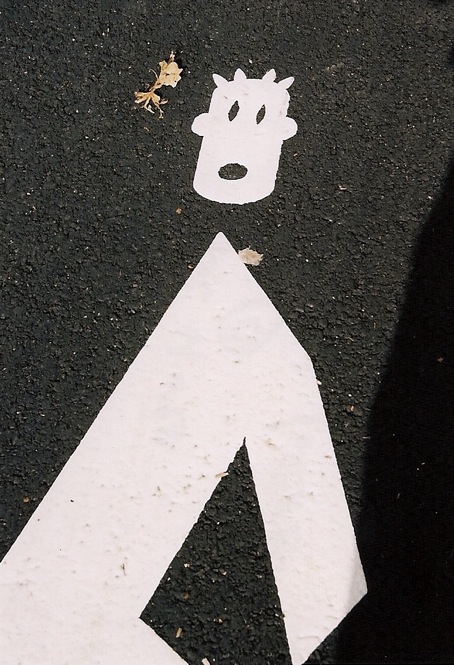 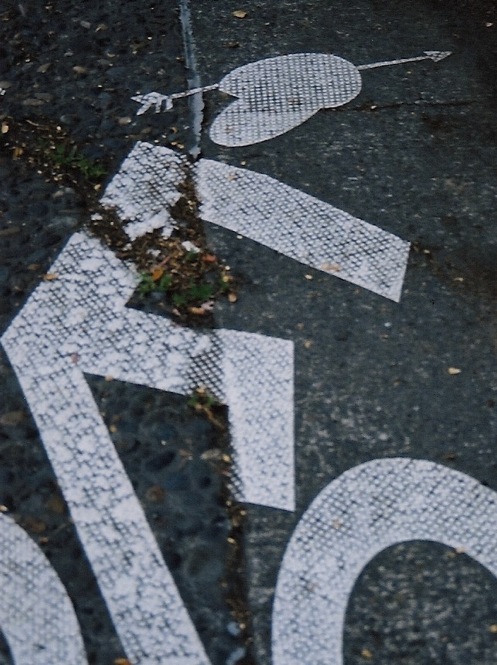 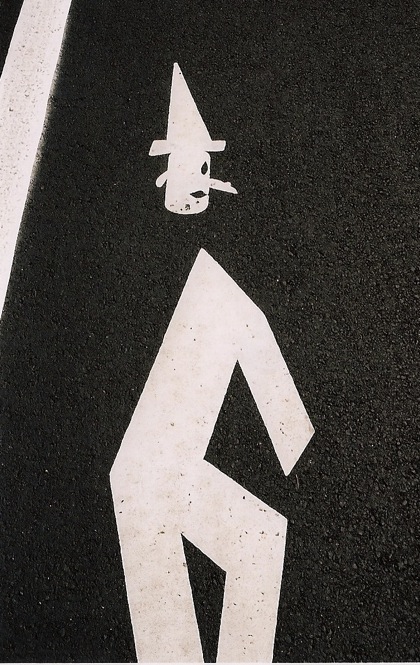 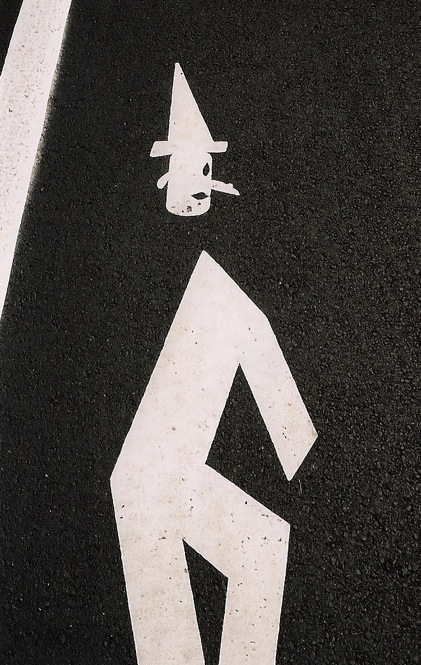 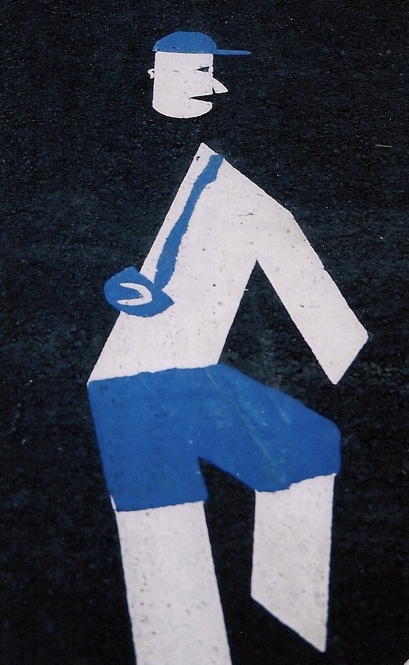 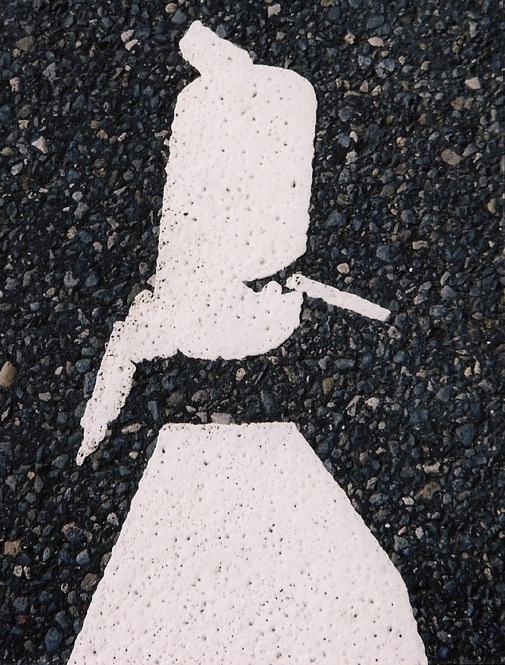 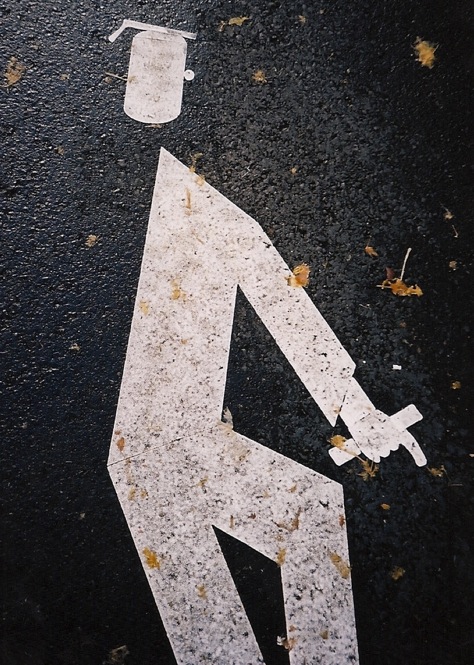 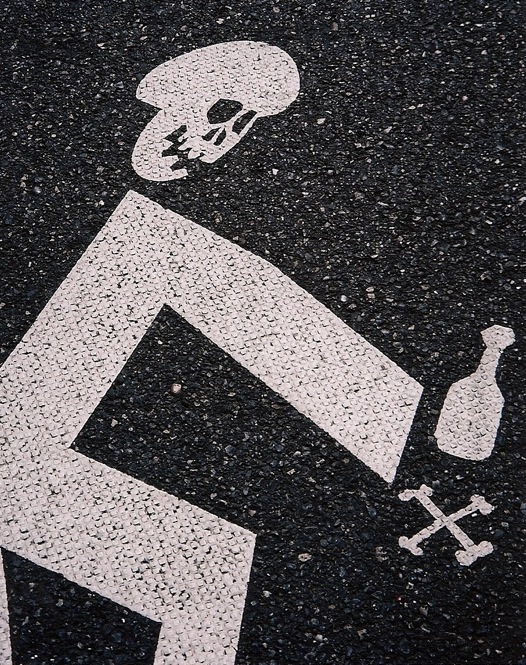 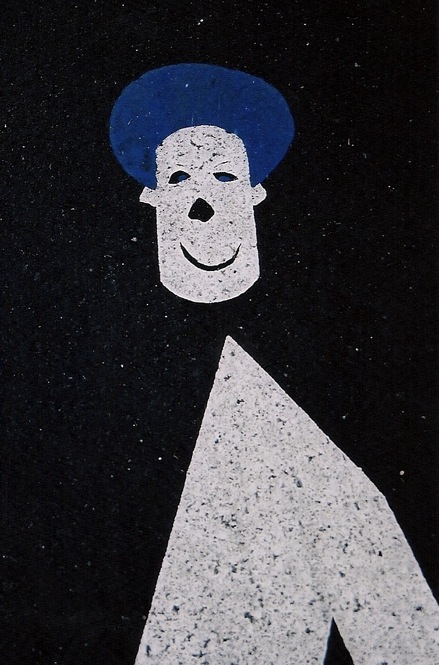 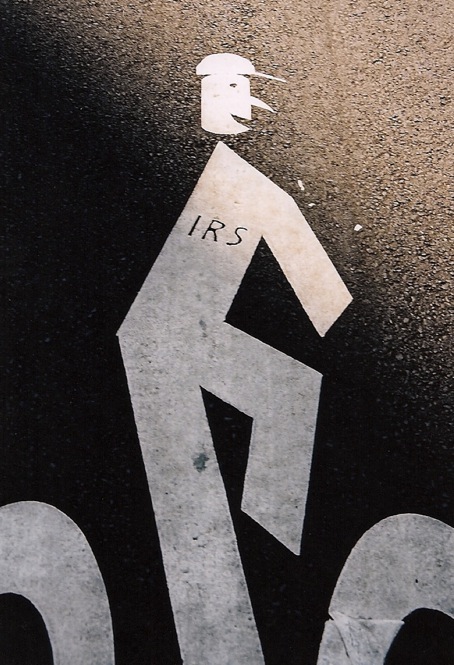 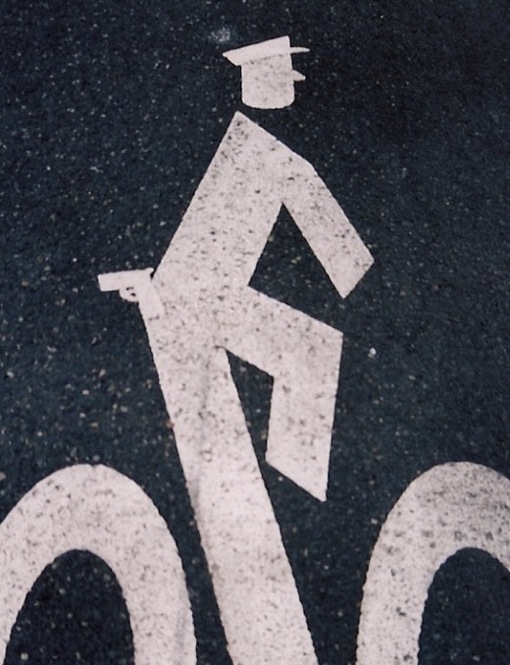 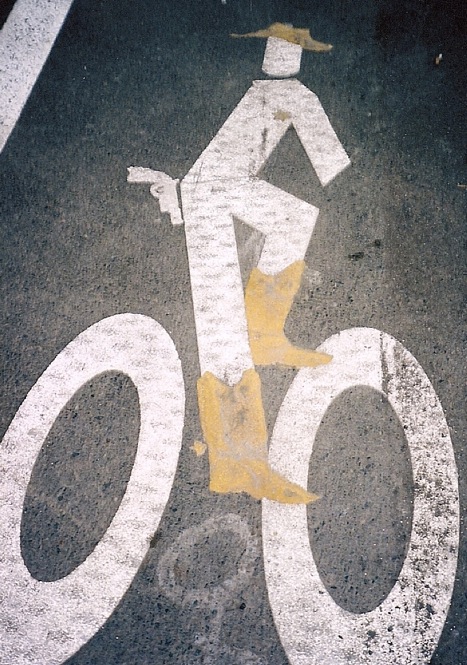 I think in the second photo, the “messenger bag” has the logo for the United States Postal Service on it:

This is a great example of what makes PDX a fun place to live.

I agree with the comment that this “makes PDX a fun place to live” because it is the little, everyday things that put the smile on your face. Here is a like to a Flickr group on PDX bike lane stencils.

I have not seen a cargo bike stencil though. Who do I need to talk to to get that? :O)

While I really like these little buike lane people ( some of them), I have issues with it in the same way.

The amount of recognition given to the figures outside of the Benson and the Heathman totally downplays the fact that these businesses are a couple of the largest violators of bike lane rights.

Then to hear that a book was titled “Martini’s in the Bike Lane”, which is in direct reference to the bike lane outside the Benson Hotel, really hit home with me.

I was pissed. I wanted to go rip up the martini guy outside the Benson myself, in the middle of rush hour…

When is the city going to fix the problems with abuse of the bike lanes, instead of letting big money and tourism dollars roll over the top of it’s cycling citizens?

FWIW dept.: slide #19 (cyclist reading) is, appropriately enough, right outside the Belmont Library at Taylor & 39th.
Also, I believe the tradition goes back a bit earlier than 1999 (i’d say 1997), but I don’t have anything to support this so…

These are simply fabulous – Kirsten & crew do a great job, and i’m glad their fine work is being documented for posterity.

I thought number 2 looked like one of those big-ass chains with a cloth sleeve and a lock.

There’s a great Santa hat near the Belmont Library, also.

I think it’s fun but somebody (post#6) will find something to whine about. Jeeze!!!

These things are great. I love discovering them around town.

I guess for some people, (me) it is more important to keep people safe, and their choice of transportation protected, than to gloss over problems and smile like nothing wrong is going on.(you)

There are real problems with the bike lanes, and local businesses violating the right of ways, and these exact businesses are directly referenced to through these cute little symbols.

This is where the problem starts, and the smiles wear off.

I know what I am talking about.

Don’t forget the viking helmets on the one’s along Willamette Blvd near U of P. I smile every time.
Icarus – I’m confused how making the bike lane indicator a bit more artful has anything to do with bike lane safety. What am I missing?

A lot I guess…

If you did, you would understand…

I read your posts a few times over, and I still don’t understand why this lighthearted article is an appropriate place for your (very valid) concerns.

The first modified lane marking I ever saw in Portland was the one on 12th in downtown with a knife between his teeth, It was right after I moved here, and I flipped out!

Cycling is “boring as hell”?

Has anyone done t-shirts with the bike guys? I’d love one of those and it’d be a great “made in Oregon” type merchandising. I’d certainly wear them.

#19 Allison:
I’d love to see that trademark battle. Who owns the right to profit on that art: the public or the artist who put it on the road? Does the .gov own artwork?
Can our .gov realistically own intellectual property of this nature?

Will the next artistic challenge be to dress up this so-called portable laser-lit “bike lane”?

I’ve always liked the one at Broadway and 10th because I thought he had a slingshot or a yo-yo which seems fun and mischievous, and now I see it’s chopsticks? Whatever it is, that bike lane guy is having a good time. And I agree with Allison…bike lane figure tee shirts…sounds like the perfect thing for Bike Craft next year?

Perhaps. I’d buy several of the shirts.
Maybe I’ve watched to many CSPAN & CourtTV; I’d like to see the hand wringing and philsophical angling that such a proceeding would bring forth.
We know that corporations claim to own anything that an employee creates. Does the Public (BIG P) own the art that a .gov creates? We did pay the taxes.

Icarus – I read your post top to bottom, I still don’t see what beef you have against the actual designs and bike lane figures – you have some issues with the businesses connected but I’ve never bought a drink or eaten at a diner b/c of seeing one of these characters on my ride. It’s just odd the way you take a fun topic/ articles and spiral down.

I love the bike people… it’s nice to see Abe Lincoln whenever I visit friends.

I think Icarus makes a good point though – not necessarily relevant to this post *but* I am annoyed whenever I’m riding around and I have to fight with traffic because some jerk parked their vehicle in the bike lane.

I love these. I work on the SW waterfront, and this summer they finished putting in the new bike lanes. I was surprised and pleased to see the city worker having fun with the the biker image. It was nothing artistic like some of the above, but he “modified” a few of them. One in particular has the helmet piece turned upside down and cut out to look like horns. I enjoy the subtlety.

There was a presentation at PSU a while back in which Mia Birk from Alta Planning talked about bike infrastructure in Europe. One of the suggestions that came out that talk was that bike routes should be named. Think of the tangled bike routes you see on a Portland bike map – they don’t necessarily follow a single street in any one direction, and that makes it difficult to describe them within the context of directions. If, however, each route had a name and an icon associated with it – and fun, street markings like in these photos – you could easily give directions from point A to point B by saying (for instance): go north on the the cowboy route, west on the robot, left at the angel, and continue on until you hit the Abe Lincoln. Each bike boulevard and route would have its own corresponding icon right there on the pavement.

I’d originally thought naming a route would be all about signs, but it seems like a good name would also be one that could translate into an icon that would read well on the asphalt.

Hi. If anyone’s interested in exploring ideas of making t-shirts (or something else crafty) out of bike guys, let me know. I’m not really interested in it as a monetary profit but just as a fun thing to do and share.