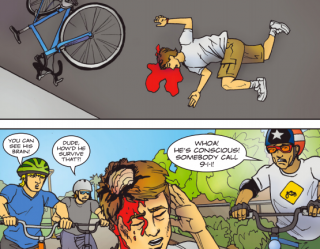 This message brought to you by the City of Phoenix.

Dangerous activity: Phoenix decided to promote safe bicycling with a series of “graphic novels.” In the first, a dog runs in front of a young man biking without a helmet; he flips 180 degrees upside down and smashes his head on the ground, making his brain visible.

Healthy activity: Every hour a Dutch person spends cycling adds one hour to their life expectancy.

Good goal: Louisville is the latest city to set a goal of reducing miles driven.

Bad goal: Days after officials bragged to Politico that a new federal transportation rule would be “groundbreaking,” the Obama administration proposed a new rule that continues to define transportation success as how fast cars are physically moving rather than how long it takes people to get places. (Transportation for America also has a scathing summary.)

DIY literature: Portland-based bike-book publisher Microcosm is primarily female, primarily ages 20-30, primarily low-income and primarily of color, Joe Biel tells Bicycle Times in a profile, because that’s who turned out to be interested.

Self-driving transit: Elon Musk says Tesla Motors is developing an autonomous vehicle for central cities that is “not exactly a bus.”

Philly bike share: The system in the bike-friendliest city on the eastern seaboard is up to 8,300 memberships and is getting 300 more bikes for its first birthday.

Brazil tragedy: A coastal bike path in Rio de Janeiro, built in preparation for this summer’s Olympic Games was broken by a wave and collapsed, killing two people.

Fatality sentencing: A new Washington law is extending the sentencing range for vehicular homicide. The Columbian talks to the families of traffic violence victims.

Displaced by wealth: “Portland is quickly becoming accessible only to the wealthiest iconoclasts,” warns Colorlines in a harrowing look at racial displacement in Portland.

Bike restrictions: What happens when your state mandates helmets and IDs for anyone on a bike? Australians share their observations.

Peaceable kingdom: This thread of tips from natives for bicycling in Copenhagen doesn’t mention cars at all.

Even at the Northwestern US’s worst, I’m really grateful to NOT live and cycle in Australia!

In response to the NYTimes article about SFBARF…

Thanks for sharing this. I couldn’t follow the argument, though. The author seems to argue that building more will attract more people to San Francisco, and that, somehow, not building as much more will limit the newcomers.

That response is a pack of lies. SFBARF is specifically lobbying for a massive increase in rent-regulate housing (BMR) in the bay area.

are
Reply to  soren

not according to the NYT article

Alex Reedin
Reply to  are

Thanks Paul Cone.
*That* in my opinion was an excellent piece on the SF housing predicament. The first one I’ve seen that didn’t fall into one or many of the usual traps. Thank you!

Every hour a Dutch person spends cycling adds one hour to their life expectancy.

I don’t spend time on my bike. I’m banking it!

Only in the Netherlands.

Waiting for the City of Phoenix coloring book for grown-ups about checking your mirror and how you are responsible when you open your door in traffic.

Don’t be silly. Grown-ups don’t need education; they know everything! It’s those children that insist on playing on their bikes in the street that need to be set straight.

I wish agencies that produce this kind of garbage would just admit that this is their attitude. “If you’re too stupid or poor to not have a car, then you’d better watch the hell out; real adults are driving here!”

Humm! Hard to turn your head with a helmet!!! Nothing holding you back from that. Only time I turned my head as an adult to look behind me on the bike is when I did not wear my mirror. caught a little post on the side of the road and did a face plant. Messed me up for a week or two. Always look where you are going if you need to look behind, use a mirror. Mine is on my sunglasses. A Look mirror over 20 years old. Helmets has saved my life at least 5 times. Each time the helmet was destroyed and I was unscathed except the broken Clavicle. The helmet could not protect me from that! It was destroyed the first time I did a somersault. Destroyed the jersey.

Shoulder checks really are not that hard..

…as long as it’s in America. (I’m trying to plan travel in Tokyo and Taipei and wanted to see what the site had to say).

Those comics are government anti-biking scare tactic propaganda disguised as “pro biking safety.” The moral in all three comics is: When shit happens, it’s the cyclist’s fault. Book 2 the kid isn’t riding on the right side of the road and T-bones a truck. That’s not a direct consequence of his action. And the right side is more dangerous. “Right side, suicide.” That saying exists for a reason. Google it. In book 3 the kid gets doored. It’s his fault, because his breaks were slow. No responsibility is attributed to the driver. Also, his handlebar goes sideways through his stomach because he didn’t have grips. Seriously? Fuck you Arizona.

Thanks for the plug! To clarify, most of our diehard fans and readers fit that description. The sentence construction is a little confusing.

Thanks for the plug! To clarify, most of our diehard fans and readers fit that description, though the staff isn’t too far off either. Your sentence construction is a little confusing. Hell, my own life made it impossible for me to go to college and that alone seems rare and freaky in the bike world.