Join us Monday to learn about the history of Portland bicycling 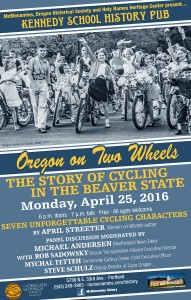 The event is part of the History Pub series sponsored by the Holy Names Heritage Center, Oregon Historical Society and McMenamins. It’ll be held at the McMenamins Kennedy School, 5736 N.E. 33rd Ave., from 7-9 p.m. on Monday, April 25. Doors open at 6 p.m.

What happened to Eric Lungren’s forthcoming book on Portland/Oregon bike history? All his BP posts are linked here: https://fortunaerota.wordpress.com/press/

http://www.cts.pdx.edu/pdf/lundgren_PSUSeminar_113007.pdf
I think some of BP’s history posts could use some more cross-tagging (maybe put them all in the history category?)
http://bikeportland.org/cats/portland-transportation-history

Will there be a recording available afterward?

I believe OHS always tapes at the Kennedy School, not sure if they always post it, but many end up here http://www.youtube.com/channel/UCeCtHcPsdEys360N-qyPUPA

This looks great, but I bemoan that everything in the bike community always seems to happen at pubs.

Some folks don’t want to be around the alcohol culture.

Or habitually meeting in a commercial establishment when a public facility with no commercial dimension would once upon a time have also sufficed.