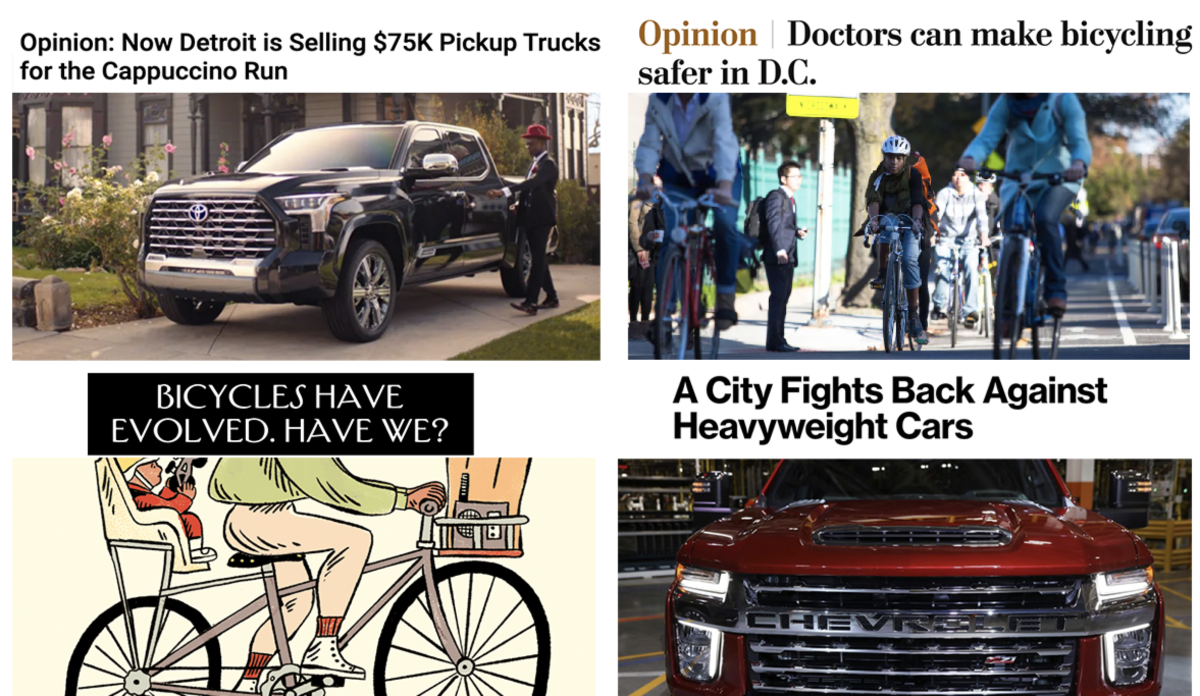 Welcome back from the long weekend.

Quick note: I’m in California visiting family at the moment and only working very sparingly, so things might be a bit quieter around here until I return Friday morning. Lisa Caballero and Taylor Griggs will hold down the fort. Have a great Pedalpalooza kickoff and I’m sorry to miss it this year!

Doctors’ orders: A medical student at George Washington University makes the case that D.C. has the money and need to vastly improve cycling by creating a network of protected lanes and that the city’s physicians should organize a campaign to convince lawmakers to make it happen.

New Yorker goes on a ride: The venerable publication dives into bicycle history inspired by Jody Rosen’s new book, “Two Wheels Good: The History and Mystery of the Bicycle” which they say is a “set of quirky and kaleidoscopic stories.” (The book also has some fun Portland bits in the culture chapter!)

L.A. killed a freeway: The Los Angeles regional transportation authority voted to end a $6 billion plan to widen the 710 freeway after decades of planning after officials decided, “they must find a new way to lessen traffic without adding lanes.”

Denver, too: And transportation officials in Denver, Colorado have also given up on a major freeway project because it would cost too much and it’s simply not worth it.

Subsidies for cargo bikes: In Italy, business owners can receive a government subsidy of up to 30% toward the price of a cargo bike (up to $2,100).

Automotive media loves e-cars: Motor Trend, “hasn’t been taken over by a bunch of car-hating eco-weenies” say editors of the popular magazine, in a piece explaining why they are 100% on board with the push toward electric cars.

Those other car emissions: Europe will start to regulate not just engine exhaust emissions from cars but another pernicious driving byproduct: tiny particles of toxic brake dust.

Truck bloat fee: Municipal lawmakers in Washington D.C. want to charge much higher registration fees for owners of large pickups and SUVs in a move aimed at tamping down enthusiasm for the absurdly large vehicles.

The New Yorker article is by Jill Lepore, one of America’s most lauded historians. Who knew she rode a bike? This piece is more of a 50-year personal history of her relation with bicycles (beginning with her Tyke Bike, through her Big Wheel, Stingray, on to the Bad Boy she rides today). Along the way she chronicles her crashes, biking with her children on board, and her bike hacks. She’s a great writer.

I just listened to this, it is fantastic!

Truck bloat fee: Municipal lawmakers in Washington D.C. want to charge much higher registration fees for owners of large pickups and SUVs in a move aimed at tamping down enthusiasm for the absurdly large vehicles.

The fact that this description emphasized “trucks” even though SUV/CUVs vastly outsell trucks seems to me to be an example of liberal/progressive bias (and lack of introspection). SUV/CUV owners are even more a part of the problem than truck owners.

It’s mystifying to me that many USAnian environmentalists/climate warriors drive SUVs/CUVs and are often simultaneously hostile to electrification of light vehicles. This stands in such sharp contrast to democratic industrialized nations where SUVs/CUVs are increasingly targeted by environmental groups via direct action:

“The group is taking this action because SUVs are a climate disaster – if SUV drivers were a country, they would be the seventh-largest polluting country in the world,” the press release said, as reported by The Independent.

Tyre Extinguishers wants SUVs banned from urban areas and for them to be taxed out of existence through pollution levies, according to the press release, as BBC News reported. They also want to see greater investment in public transportation.

In 2019, a similar campaign in Sweden resulted in a significant decrease in SUV sales.

Middle of the Road Guy
Reply to  soren

Frank Perillo
Reply to  Middle of the Road Guy

Chris I
Reply to  soren

Hopefully they will include Teslas as well. They weigh as much as an F150, and more than most CUVs.

I find it hilariously ironic that the larger and more aggressive pickup truck grills get, the smaller their beds get. Back in the day, pickup truck beds came in two sizes, 6′ and 8′. Anyone using a pickup for its intended purpose of hauling things for work got the 8′ bed. Pretty soon, pickup trucks will have locomotive sized front ends and their beds will just be vestigial appendages.

Chris I
Reply to  Bryan Morris

The automakers are responding to the demands of their customers. In the 90s we saw “crew cabs” with side-facing, or very cramped rear seats with suicide doors. Customers demanded seating for a 4 to 5 in the cab, so they started eating away at the bed space to expand the cab. Most modern 1/2 ton pickups are basically just SUVs with 5.5ft beds. And that seems to be okay, because basically no one uses their pickup truck to actually haul anything large. IMO, a 6.5ft bed is the absolute minimum to be useful as a hauling truck. You can still get 4x8ft plywood in with the tailgate down, without having the load centered too far back from the axle.

The 3/4 and 1 ton class still come with 7ft-8ft beds, in addition to having full seating for 5 adults, but these trucks can’t fit in normal parking spots.

The “vestigial appendages” are already here. This new Ford has a 31″ bed:
https://www.motorbiscuit.com/does-ford-think-you-need-a-tiny-truck-bed-for-coming-maverick/

Apparently, from the article, trucks that can’t haul anything are “lifestyle” trucks.