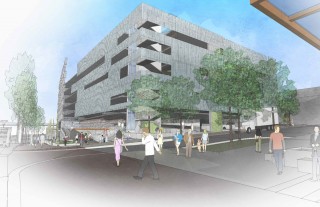 If we want to invest in something that makes money,
how about homes instead?

Portland’s economic development agency is casting about for new funding, and some people seem to think that developing a bunch of big parking garages is the ticket.

We’re working on a post following up on last week’s look at a taxpayer-financed $26 million hotel parking garage. In the meantime, readers have been having an interesting conversation about it. And reader Iain MacKenzie, who goes by “Maccoinnich” in the comments and who also happens to be the guy behind development-tracking website NextPortland.com, had one of the best-informed takes on the issue.

“This is part of the reason that they want to build this garage … they believe that it will provide them with ongoing revenue for decades.”
— Iain MacKenzie, NextPortland.com

The Portland Development Commission faces a choice, MacKenzie wrote: should it be trying to make money by pouring its investments into constructing multimillion-dollar parking garages? Or could it do better with something the city says it will actually want more of in the future, like housing?

Before we quote MacKenzie, it’s useful to know how the PDC currently makes money. It’s not actually very complicated, and it’s worth understanding if you want to know how the city works.

A lot of local government — schools, police, parks, libraries — is paid for by property taxes. If a piece of land gets more valuable because someone builds a new building on it, taxes on that property go up and public services get additional money. But in a series of designated “urban renewal areas” around the city, more than half of those additional property taxes that come from new buildings are instead sent to the PDC, which is supposed to reinvest them in improvements (sidewalks, streetcars, or apparently parking garages) to the surrounding area, which theoretically spurs even more development in that area. Then someday the urban renewal area expires and all the other city services get a gush of new property taxes from the recent development.

The extra property taxes that come from that new development are called “TIF,” for “tax increment financing.”

But as MacKenzie notes, many of the city’s urban renewal areas are set to expire, which could leave the PDC with a lot less TIF money to play with.

And that’s where parking garages seem to be coming into the PDC’s long-term strategy. Here’s MacKenzie’s comment:

As Tony’s blog post mentions, this is a period of transition for the PDC. Since the agency’s inception they’ve mostly been funded by TIF money generated in urban renewal areas. This funding model has been very successful in some areas (the River District) and somewhat unsuccessful in other areas (Gateway). Right now all of the urban renewal areas are approaching the end of their lives, and the PDC has a finite amount of money to spend. Even if the City was to create a new URA along Powell/Division, as has been mentioned, it would be a long time before it was generating enough TIF to fund new capital projects.

“A few years ago no one was building market rate apartments, despite the well documented need in retrospect. Right now no one is building condos.”
— Iain MacKenzie

They are currently studying the long term financial sustainability of the agency. Despite the beating they are rightly receiving on this thread, the PDC has done a lot of things that are good for active transportation, including providing the City’s share of funding for our light rail network and paying the entire cost of the Eastbank Esplanade. If the PDC ceases to exist that funding source does as well.

This is part of the reason that they want to build this garage, as they believe that it will provide them with ongoing revenue for decades, even without Urban Renewal. For the same reason, they have talked about building a garage on the currently vacant parcel they own at NW 6th & Glisan, immediately east of the new PNCA.

Even assuming that their financial models are correct, building parking garages is a bad model. It goes against every policy currently going into the Comprehensive Plan. A better way would be to work out how they can finance projects that build long term revenue while also furthering the City’s goals. Nick Fish raised the idea (and I think it’s a good one) that they should consider a land lease model for the Post Office site, rather than parceling off and selling the land immediately. Another idea might be to make counter cyclical investments. A few years ago no one was building market rate apartments, despite the well documented need in retrospect. Right now no one is building condos, even as house get further away from what a first time buyer could afford. I would be shocked if they couldn’t develop a model to build condo units in the $200,000-$400,000 range (as the Cyan originally intended to offer). This would both generate revenue for them and help with Portland’s ongoing affordability problem. Those are just a couple ideas, but I’m sure there are many other ways they could make money for the city without sacrificing our collective values.

Aside from the PDC, most of Portland’s city government seems solid on the principle that no public dollars should further expand car infrastructure. The PDC is about to hire a new executive director. Even if it’s too late for our leaders to change course on paying to build a big parking garage across the street from the state’s best transit hub, they still have a chance to hire someone who will spend the public money on the public’s interests.

Yes, we pay for good comments. This regular feature is sponsored by readers who’ve become BikePortland subscribers to keep our site and our community strong. We’ll be sending $5 and a little goodie bag to Maccoinnich in thanks for this great addition. Watch your email!

I’m looking for a bad model myself.

typo: Aside from the PDC, most of Portland’s city government seems solid

One day in the, not too distant, future we will look back on the parking garages, the parking lots, the strip malls and the massive highways as ” The greatest misallocation of resources in the history of the world”. to paraphrase James Howard Kunstler.

If PDC is looking to make an investment in income producing businesses, how about financing a chain of marijuana shops. Lots of profit potential there.

Let’s look at the bright side. It will be easy to turn in to Right to Dream 3 once the age of happy motoring is over.

Thanks for this excellent coverage. I never could understand PDC’s structure or its relationship to City government. This is really helpful.

I think building parking structures is a good idea – except for the fact that government rarely allocates capital in an efficient manner. Parking garages should make cyclists very happy: get those evil door-swinging cars off the streets! They might build a lot of parking structures downtown – and then they might get away with banning parking on the street – the goal of most on this website.

I don’t think most BikePortland commenters want to ban all street parking. They want to value it appropriately as a highly limited resource.

Unless you equate “charging an appropriate price” with “banning”, I’m not sure where your impression is coming from.

My impression is from perhaps 1000 hateful comments on this website toward cars parked on the street.

I’d be interested to know the payoff timeframe until actual profit. One of the potential, foreseeable effects of self-driving, electric, Uber transportation is less need for car storage. Owning a bunch of pay-to-park structures may not be such a great revenue source in 20 years or so

Self driving and electric cars have the same requirements to be stored while you are in a business or at work. Uber will not transport everyone each day.

Self driving and smaller electric cars also take up far less space in a garagem due to likely smaller sizes and because they can park closer to each other, utilize stacked parking patterns, and you don’t need walkways for drivers and passengers to walk around.

Even if there’s the same # of cars needing to be parked, the space available will be more efficiently utilized and there will be additional supply, further depressing the market for these spaces in 15 years.

I’ve read a fair amount about self driving cars and there’s a steam of thought that they will transform ownership and usage patterns. I buy into that concept. Especially for cities.