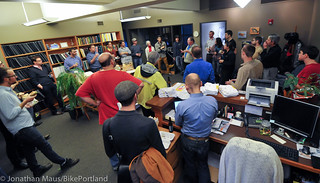 The crowd of problem-solvers in 2013.
(Photos © J. Maus/BikePortland)

BikePortlanders may remember that a few years ago, Portland Planning and Sustainability Commissioner Chris Smith approached us with an idea: he felt the city’s bike parking rules needed an update, and wanted help proving it.

So we teamed up with our friends at Lancaster Engineering to host a “wonk night” at which 30 attendees broke into groups and brainstormed ideas for updating the city code that tells developers how to design bike parking and how much of each type to include.

Smith wrote us this week to share some good news: Tomorrow night is the first meeting of the Bicycle Parking Stakeholder Working Group, which has been officially tasked with rewriting the city’s code.

They’ll be likely to tackle many of issues we discussed on that fun night back in 2013: formal rules for hanging bike parking; how best to provide for cargo bikes; how to handle temporary bike parking facilities at major events; how to ensure that short-term parking at commercial destinations is adequte.

If you were one of the folks who came in that night or got involved as a result, congrats! And thank you! We’ll write more about this process as it goes forward, so the opportunities for making bike parking permanently better in Portland are just beginning.

Yes, It is very good news.

Who’s in that working group?

Does anyone know how the outreach to private business will actually work? The bike parking at our facility was awful (old 70s era hoops) so we requested staples (and I sent our landlord links to the current design standards, got quotes, etc) and they instead installed hanging racks that are a) too high for some of us shorter types to reach and b) are really insecure (we’re expected to lock our bikes using cables that are screwed into wooden posts). The install and design was clearly designed by and installed by people who never ride bikes (the contractor admitted as much).

So, even though we used the great resources already available, I felt like I didn’t have any City of Portland weight behind our request (though I’m sure there is something behind the provide car parking at our facility). Thanks!